The global electric powertrain market is expected to reach at a compound annual growth rate (CAGR) 13.8% during forecast period and predicted to hit over USD 200 billion by 2027. Increasing sales of electric vehicles that include pure and hybrid electric vehicles is an important factor that fuels the market growth. 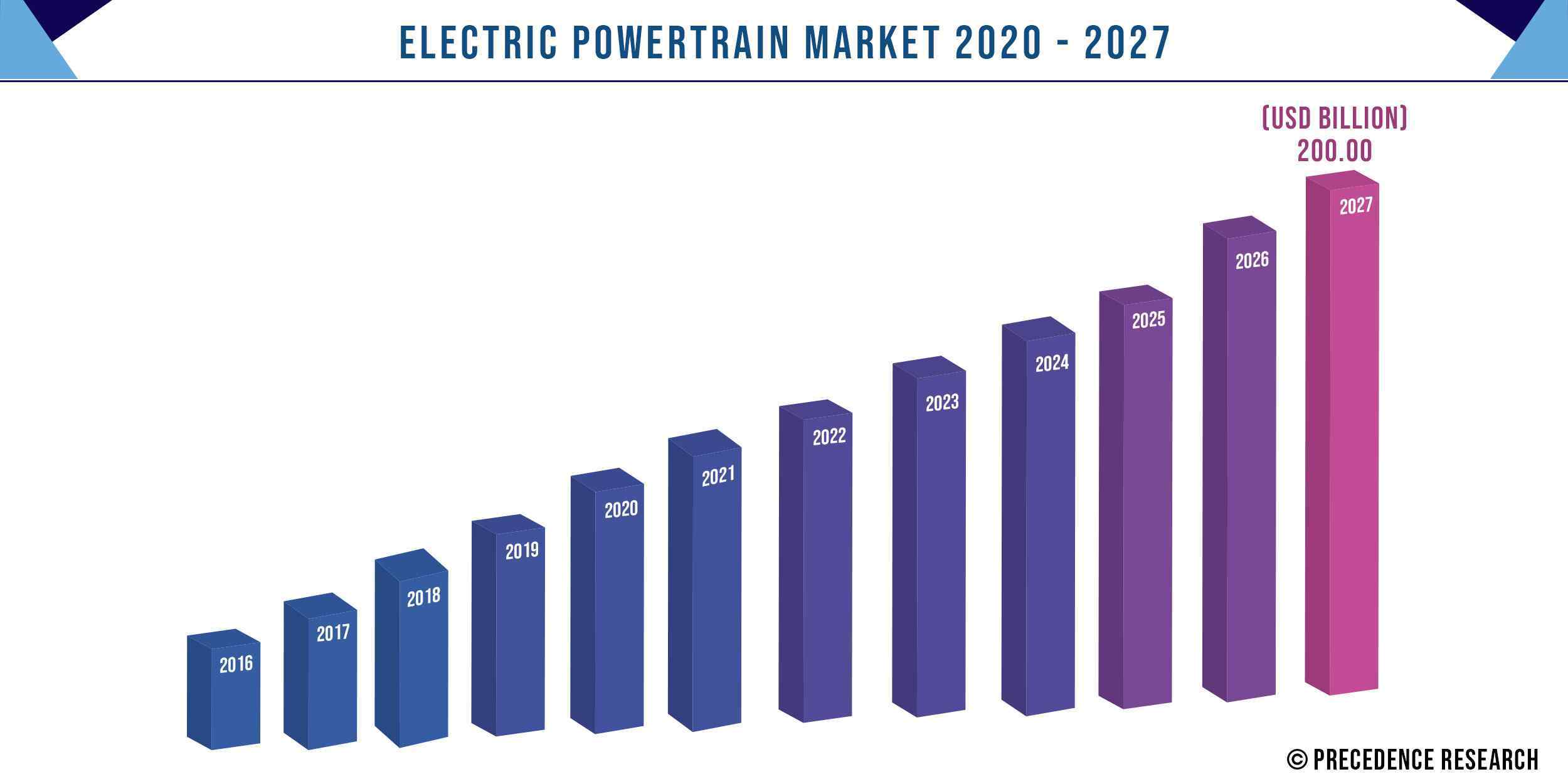 Electric vehicles are the next generation vehicles and analyzed as the future of automotive market space as the fossil fuels are exhausting rapidly. Consequently, an alternative power source is required for the vehicles, thereby triggering the growth of battery-powered vehicles. In the wake of same, many countries have issued strict regulations for the adoption of alternate power to vehicles to curb the carbon emission and preserve fossil fuels for other applications.

In addition, technological innovation in the battery production technology has transformed electric vehicles into more competitive over conventional ICE vehicles. The cost associated to the batteries used in an electric vehicle has shrunk prominently due to optimization in the production process, economies of scale, and technology advancement. As the prices associated to the components and battery of EV are expected to decline over the analysis period, the vehicles would reach Total Cost Ownership (TCO) parity that would enable mass-market penetration of electric vehicles.

Based on electric vehicle, the global market for electric powertrain is classified into Battery Electric Vehicle (BEV) and Hybrid Electric Vehicle/Plug-in Hybrid Electric Vehicle (HEV/PHEV). The BEV segment dominated the market accounting for nearly 70% of value share in the year 2019. The rising adoption of BEV is majorly because of stringent government policies to regulate the carbon emission from transportation sector. Moreover, advancements in the battery technology along with declining price for lithium-ion battery anticipated to leverage the demand for BEV in the coming years.

Contrary, HEV/PHEVs analyzed to witness prominent growth of approximately 15% over the forecast period owing to its specific design that enhances the application of Internal Combustion Engine (IEC) in interaction with electric powertrain. PHEV and HEV assist driver with flexible charging along with long running capacity that again expected to propel the demand for PHEV in the near future.

The battery segment led the global electric powertrain market accounting for a value share of nearly 36% in the year 2019. A battery is the sole of an electric vehicle and constitutes around 50% of the total cost in the Battery-powered Electric Vehicle (BEV). In other types of electric vehicles it is used in combination with other power sources such as ICE to provide a back-up to the vehicle during drain-out condition. In addition, incorporation ICE with battery in an EV also enhances the efficiency and power of the vehicle.

On the other hand, motor/generator segment expected to show lucrative growth over the analysis period. The growth of the segment is attributed to the escalated penetration of PHEV and BEV across the globe. These vehicles are equipped with similar e-motor configurations. Furthermore, joint ventures between Original Equipment Manufacturers (OEMs) and suppliers to produce e-motors would prominently leverage the electric powertrain demand. For example, in August 2019, Nidec Corporation, a manufacturer of e-motors signed a joint venture agreement with GAC Components Co., Ltd., under which the companies would manufacture automotive traction motors. 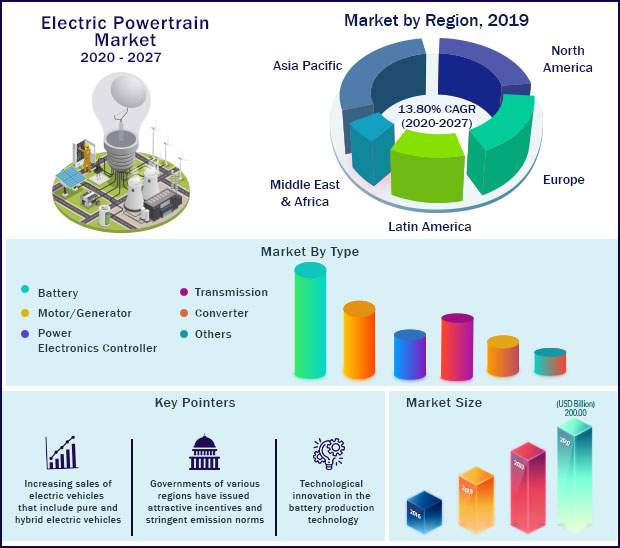 In 2019, the Asia Pacific emerged as the global leader with a value share of approximately 60%. This is attributed to the rising adoption of electric vehicles in emerging countries such as India and China. Increase in the per capita income of consumers in these countries along with stringent emission norms such as China VI and BS VI expected to significantly increase the penetration of electric vehicles in the region.

Besides this, Europe is projected to be a significant market for electric powertrain owing to the presence of numerous OEMs. Many European countries, such as the Netherlands, Norway, France, and Sweden witness significant rate of adoption for EV. This in turn, expected to boost the demand of electric powertrain in the region during the analysis period.

The global electric powertrain market is highly consolidated and competitive with the prominent market players accounting for significant value in the market. Industry participants are primarily focused towards new product enhancement and development for expanding their existing product portfolio. For instance, in 2017, Magna International Inc. formed a joint venture with Huayu Automotive Systems which is a wholly-owned subsidiary of SAIC Motor. The joint venture would aid Magna's first e-drive business in China. Similarly, other players are also involved in the merger and partnership activities to extend their reach to the customers.

Some of the prominent players in the electric powertrain market include:

This research study comprises complete assessment of the market by means of far-reaching qualitative and quantitative perceptions, and predictions regarding the market. This report delivers classification of marketplace into impending and niche sectors. Further, this research study calculates market size and its development drift at global, regional, and country from 2016 to 2027. This report contains market breakdown and its revenue estimation by classifying it based on electric vehicle, component, and region: