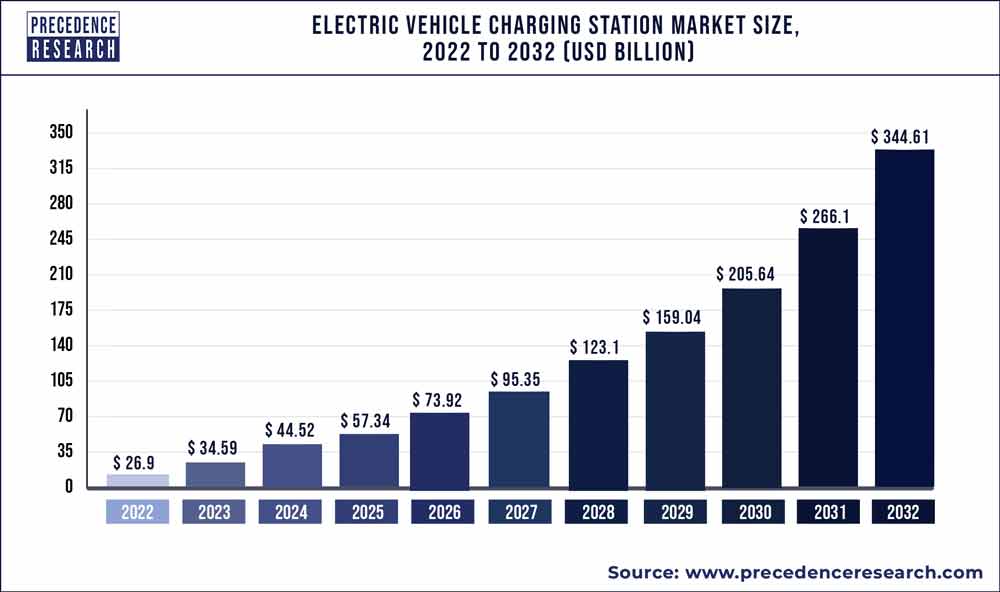 Rising demand for electric vehicles is one of the prime factors for the aggressive growth of EV charging station market. The growth is further propelled by the government funding to the Original Equipment Manufacturers (OEM) for the deployment of charging stations. For instance, in December 2016, ChargePoint Inc. was awarded USD 4 million by California Energy Commission (CEC) for completing the West Coast Electric Highway that connects Baja California to British Columbia with electric vehicle charging stations.

Additionally, increasing popularity of Mobility as a Service (MaaS) also expected to flourish the market growth. Further, the growth of the EV charging station is fuelled by the significant emphasis on the subscription-based charging models. As per the model, many utilities such as Vattenfall AB, Duke Energy Corporation, and New York Power Authority have signed a partnership agreement with the OEMs to provide the subscription-based services to their customers. For instance, in April 2019, Duke Energy Corp. signed a partnership agreement with ChargePoint Inc. for offering subscription-based services to its EV drivers in the U.S. state of North Carolina.However, various costs associated to the EV charging infrastructure that includes maintenance cost, installation cost, and operational cost are impacting negatively on the market growth.

The governments all around the globe have shifted their focus from other activities to medical and health care facilities due to COVID-19 pandemic. During the outbreak, strict lockdown rules were imposed in all countries. These restrictions hampered the work process of every industry. People were forced to stay at home and maintain social distancing norms and prevent the coronavirus from spreading, affecting the availability of the labor. However, as all countries lifted the lockdown restrictions, the ongoing projects resume, and the electric vehicle charging stations market is likely to rise significantly.

Various governments have enacted strict regulations governing the placement of charging stations. When installing charging stations, service providers must adhere to a set of guidelines. When the installation is on private property, they need permission from plot owners, local governments for regulatory mandates, and utility companies for energy transfer.

Surge in sales of electric vehicles

The initial cost of level 3 fast chargers and ultra-fast chargers is significant. In fossil fuel-powered automobiles, most people prefer 5-7 minutes, however level 1 and level 2 chargers provide safe driving for 6-16 hours when fully charged. The charging time for these rapid chargers is less than 30 minutes. 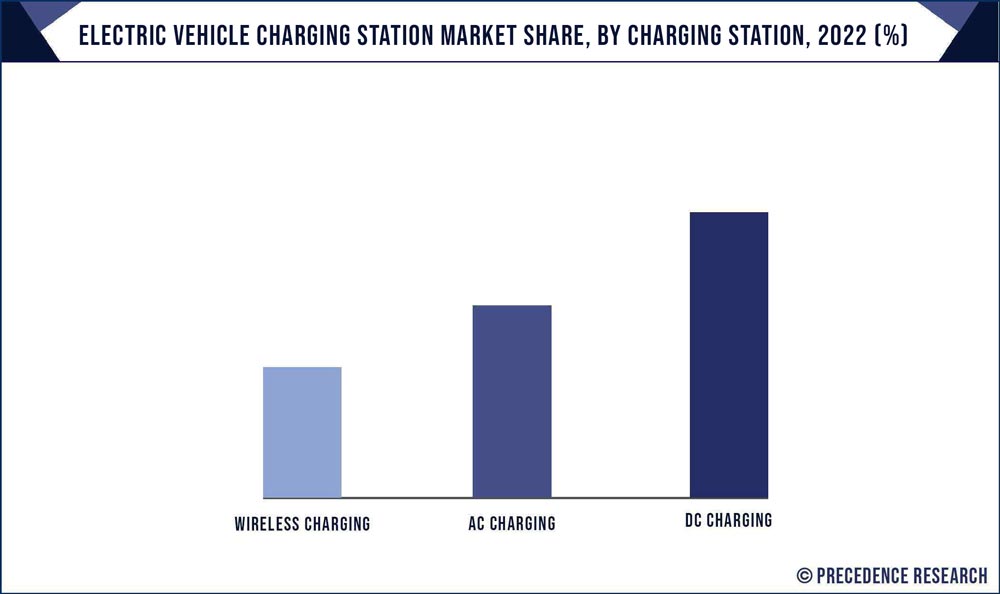 The DC charging station charges the battery directly as it converts the electricity prior to entering in the cars converter. Additionally, rapid increase in the adoption of technologies, such as Near-field Communication (NFC) and Radio Frequency Identification (RFID), in charging stations installed on highways also flourishes the DC charging market growth.

Public type charging stations held major revenue share in the year 2021 as they are more cost-effective to the manufacturers. In addition, they have sufficient parking space and are accessible to all public. 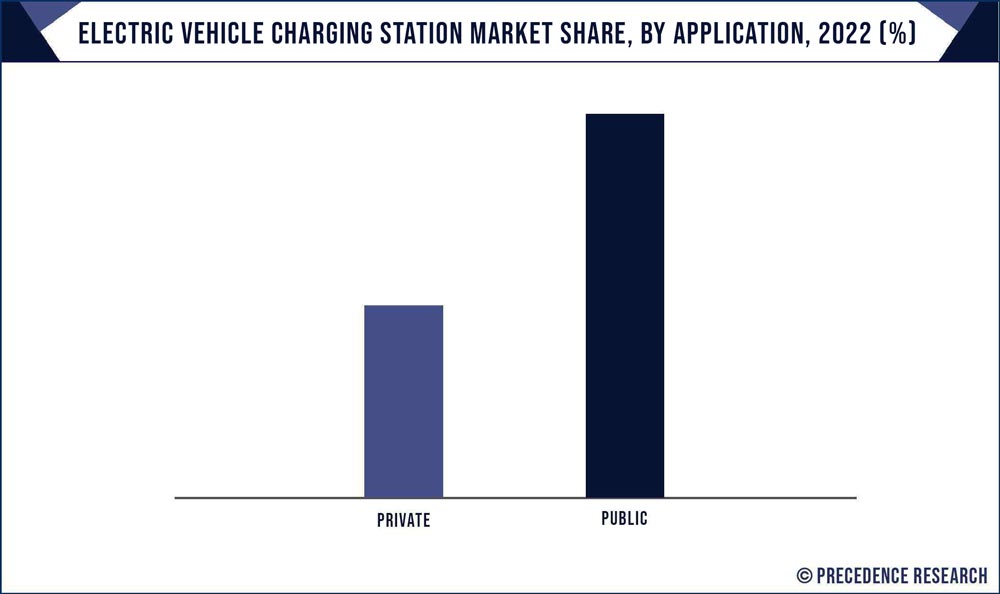 On the other hand, private type charging stations are basically workplace based or residential based station that are only accessible to the owners or limited public. As a result OEMs and different utilities are also focused towards building public charging station. Thus significant benefits offered by public type over private type fuels the market growth.

Asia Pacific dominated the global electric vehicle charging station market in 2021 and is expected to be the most lucrative region during the forecast period. This is majorly attributed to the increasing investments by the government of China, South Korea, Japan, and other Asian countries for installation of charging infrastructures. For instance, in April 2020, China announced its plan to invest USD 1.43 billion in 2020 to maintain its leadership in EV adoption race. Similarly, Singapore, India, Korea, and Japan are also investing in the electric vehicle charging infrastructure to promote its adoption in their region.

The market for EV charging station in Asia-Pacific region is being driven by the growing government initiatives. As of the end of July, members of the Alliance claimed that around 566,000 public charging stations had been erected and were operational across the country, according to figures released by the China Electric Charging Infrastructure Promotion in August 2020. Furthermore, by 2050, the Japanese government plans to convert all new cars sold in the country to electric or hybrid vehicles. By 2050, the government wants to reduce carbon dioxide emissions and other greenhouse gas emissions by around 80% per car. Thus, the market growth in region is expected in the near future. 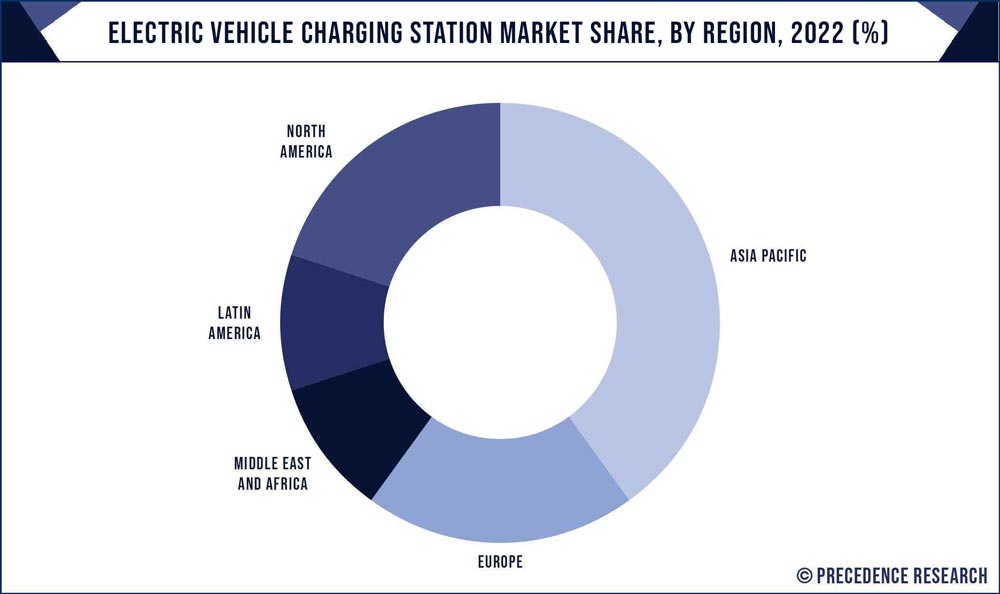 Europe and North America witness moderate growth in the global electric vehicle charging station market. This is mainly due to the government’s ambition in Europe & North America to curb the carbon emission and increase the adoption rate of electric vehicles. Nearly, 76% of total charging stations in Europe are just concentrated in four countries that are Germany, France, UK, and the Netherlands. In June 2019, Volkswagen Group announced its plan to install 36,000 electric vehicle charging points in various parts of Europe by 2025. Similarly in June 2018, three major states of U.S. that include New York, New Jersey, and California announced to spend USD 1.3 billion in the deployment of EV charging infrastructure to boost their EV adoption.

The global electric vehicle charging station market is highly competitive owing to rapid changing consumer preference and continuous technological development. Nearly every market player has their prime focus towards developing fast and ultra-fast charging stations. In 2015, ChargePoint Inc., Volkswagen Group, and BMW AG announced their plan to install 100 DC fast chargers on the West and East coasts of U.S. Some players also prefer merger & acquisition strategy for consolidating their market share. In 2018, BP Plc announced the acquisition of ChargemasterPlc, one of the leading suppliers of EV chargers and in UK. After the acquisition, ChargemasterPlc was rebranded as BP Charge master. Some of the prominent players in the electric vehicle charging station market include:

(Note*: We offer report based on sub segments and regional as well. Kindly, let us know if you are interested)

By Level of Charging