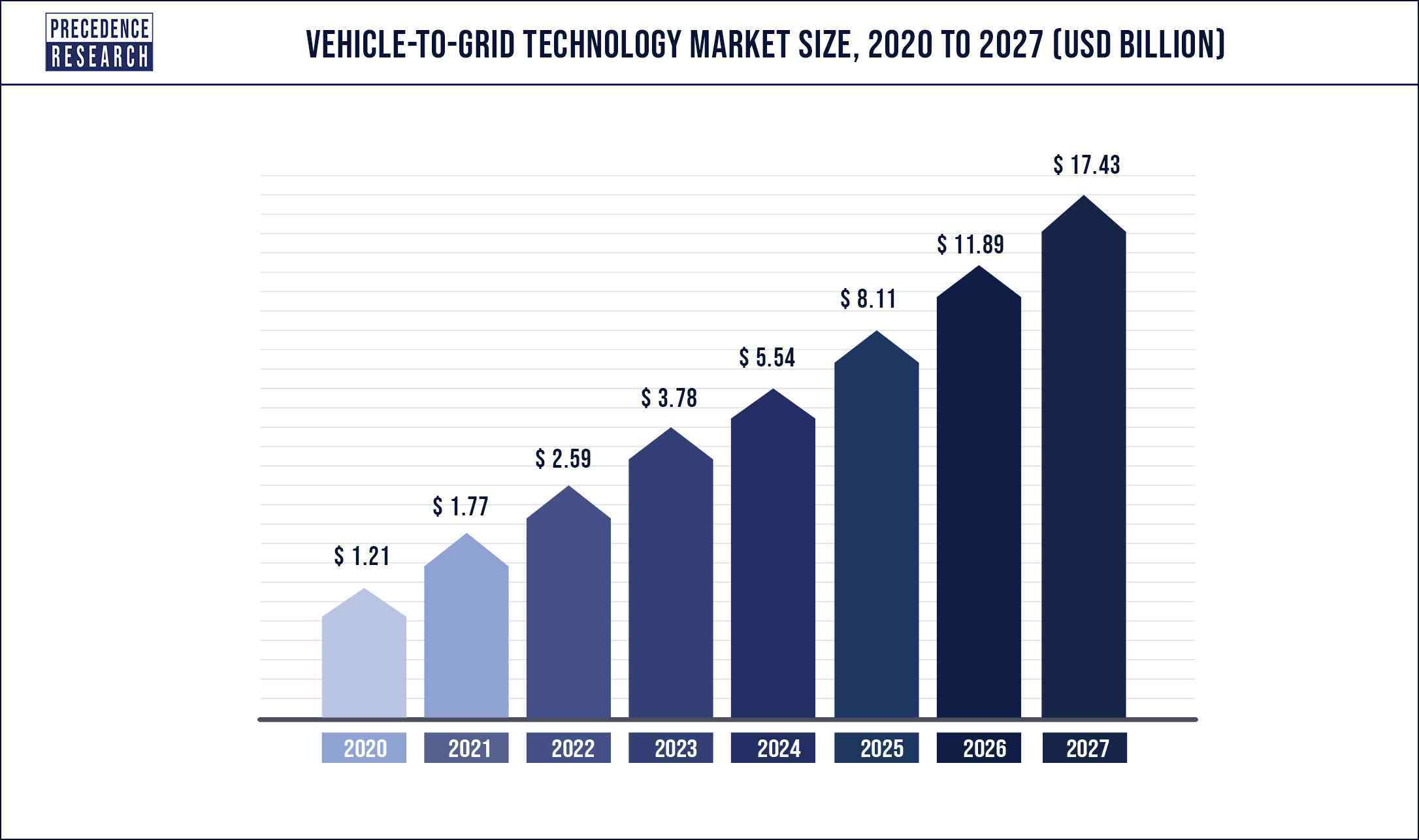 Market Drivers: Escalating adoption of electric vehicles across the globe has greatly transformed the energy sector

Intensifying awareness for smart power generation along with increasing adoption of autonomous vehicles has suggestively triggered the demand for vehicle-to-grid technology. Further, the government of numerous regions offering incentives and other paybacks over the petrol- and dieselpowered vehicles to boost the adoption of battery powered vehicles fuels the market growth prominently. Thus, global EV-sales volumes are becoming large enough to generate significant profit pools for well-established suppliers and other upstream participants. Influences such as upsurge in demand for fuel-efficient, and low-emission vehicles, high-performance, along with rigorous government rules and regulations toward vehicle emission complements the growth of the electric vehicle market. This in turn motivates the vehicle to grid technology market players.

Surge in demand for electric vehicles

High initial cost of the technology over specific period of time hampers the market growth. Repairing companies, automobile owners, and oil industries show resistance to the high cost of existing technology. Further, lack of Infrastructure and lack of knowledge about the technology, driver’s anxiety of vehicle range, and data security are some of the issues that will curb to the growth of the market. A bidirectional charger or an electric vehicle supply equipment is essential to charge an electric vehicle battery and supply electricity back to the grid. Developments in the batteries of electric vehicles have been very slow as than other technologies. Dearth of infrastructure and high initial costs of electric vehicles with vehicle-to-grid technology make it tough for these vehicles to strive with conventional vehicles with internal combustion engines. Nonetheless, the augmented battery life and change of preference in the customer’s choice anticipated to accelerate the market in the coming years.

Despite the fact that the vehicle to grid business is quickly expanding, high beginning costs and a lack of investment are two of the market's primary challenges. When compared to large power plant power generation, vehicle-to-grid is not a cheap source and requires large investments, which is a key problem for the market's growth. Furthermore, the initial cost of establishing a new electric vehicle charging station is quite high, limiting the market's expansion. As a result, these issues are expected to stymie the growth of the vehicle-to-grid market over the forecast period.

Several countries have stringent regulations governing how electricity from individual producers can be pumped into the system. In addition, a number of administrative procedures necessitate government permission. Owners of battery electric vehicles and plug-in hybrid vehicles do not appreciate such convoluted procedures. As a result, market participants are overcoming stringent rules by building standardized vehicle-to-grid protocols that strike the correct balance between grid network security and the smooth application of this technology.

Government initiatives for the adoption of electric vehicles and emission regulating measures relating to environmental issues, as well as increased public awareness of environmental issues, all contribute to the market's growth. The UK government gave around $1.7 million to two electric vehicle charging projects in August 2020, in order to assist them in utilizing electricity at its cheapest and to help balance the system.

Electric Vehicle Supply Equipment (EVSE) expected to outpace the global vehicle-to-grid technology market by the year 2027. In 2019, Electric Vehicle Supply Equipment (EVSE) contributed significant revenue share around 82% owing to their increasing usage for connecting electric vehicle to the grid. The EVSE are the main component that connects EV to the electric grid and thus increasing trend for renewable and smart energy generation will flourish the demand for EVSE components. The EVSE is helpful in charging the electric vehicles and supplying energy back to the grid. This factor drives the EVSE segment significantly in the coming years. 95% of the times, the electric vehicles are not in use, the vehicle-to-grid technology helps to use that energy by supplying energy back to the grid. This helps in achieving the electricity requirement during peak hours. In addition, they also fulfill the requirement during blackouts and natural calamities to run the necessary or emergency services.

Battery Electric Vehicles (BEVs) held significant revenue share in the global vehicle-to-grid technology market in 2020. The prime factor behind the significant growth of the segment is 100% powered by energy storage system in the vehicle. This helps the vehicle to return back maximum power to the grid. Further, in 2018, Nissan Motors Co. Ltd. announced its first electric car Nissan Leaf that secured regulatory approval for power backup for Germany’s electric grid. With the pilot project in January 2019, the company sold 8 kWh of electricity back to the grid. The fact that the category is 100% powered by an energy storage system in the vehicle is the main reason for its rapid expansion. This aids the vehicle in returning the maximum amount of power to the grid. 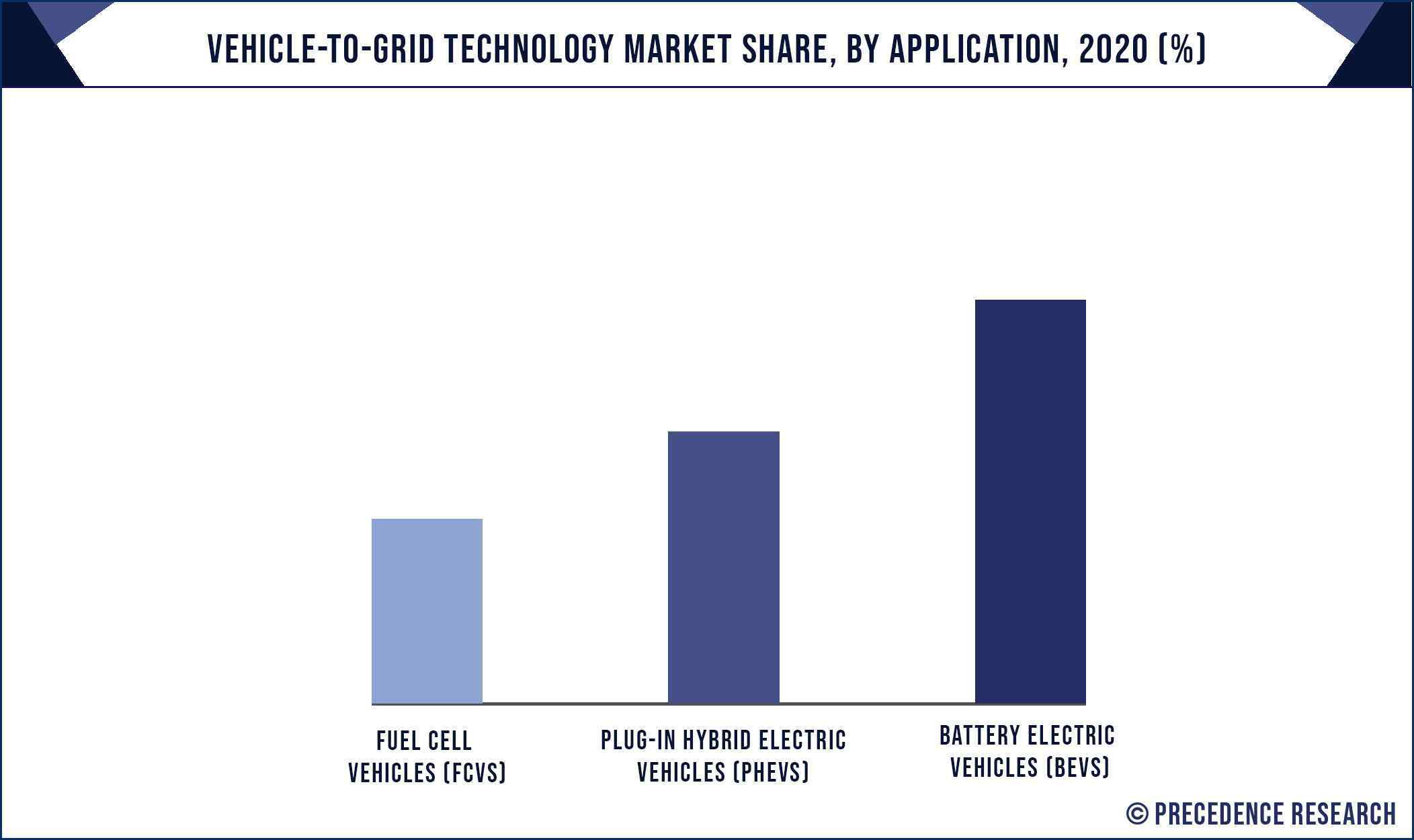 On the other hand, Plug-in Hybrid Electric Vehicles (PHEVs) exhibits the fastest growth over the forecast period. PHEV consist of larger battery and plug-in charger that can power it to run up to 20 to 60 miles after charging for only one hour. Larger battery size has higher capability to revert the large amount of power back to the grid. Thus, PHEVs expected to return back more power grid and the owners can earn more through this. In addition, the rising popularity of PHEVs being more driver-friendly along with their lucrative benefits over the BEVs has significant potential to drive the market in the years to come.

North America and Europe are the key regions in the global vehicle-to-grid technology market with significant revenue contribution in 2020. Government initiatives promoting the use of battery-powered vehicles to control carbon emission rate are the major factors that propels the market growth. In addition, long-term warranty offered by the manufacturers along with subsidies and benefits offered by the government on the adoption of electric vehicles attract large consumer base.

The widespread deployment of autonomous vehicles and the increasing use of smart power generation systems are the primary drivers driving market expansion. In comparison to conventional internal combustion autos, hybrid and electric vehicles are more fuel efficient and consume less fuel. Another growth-inducing component is substantial innovation in the manufacturing processes of vehicle batteries. 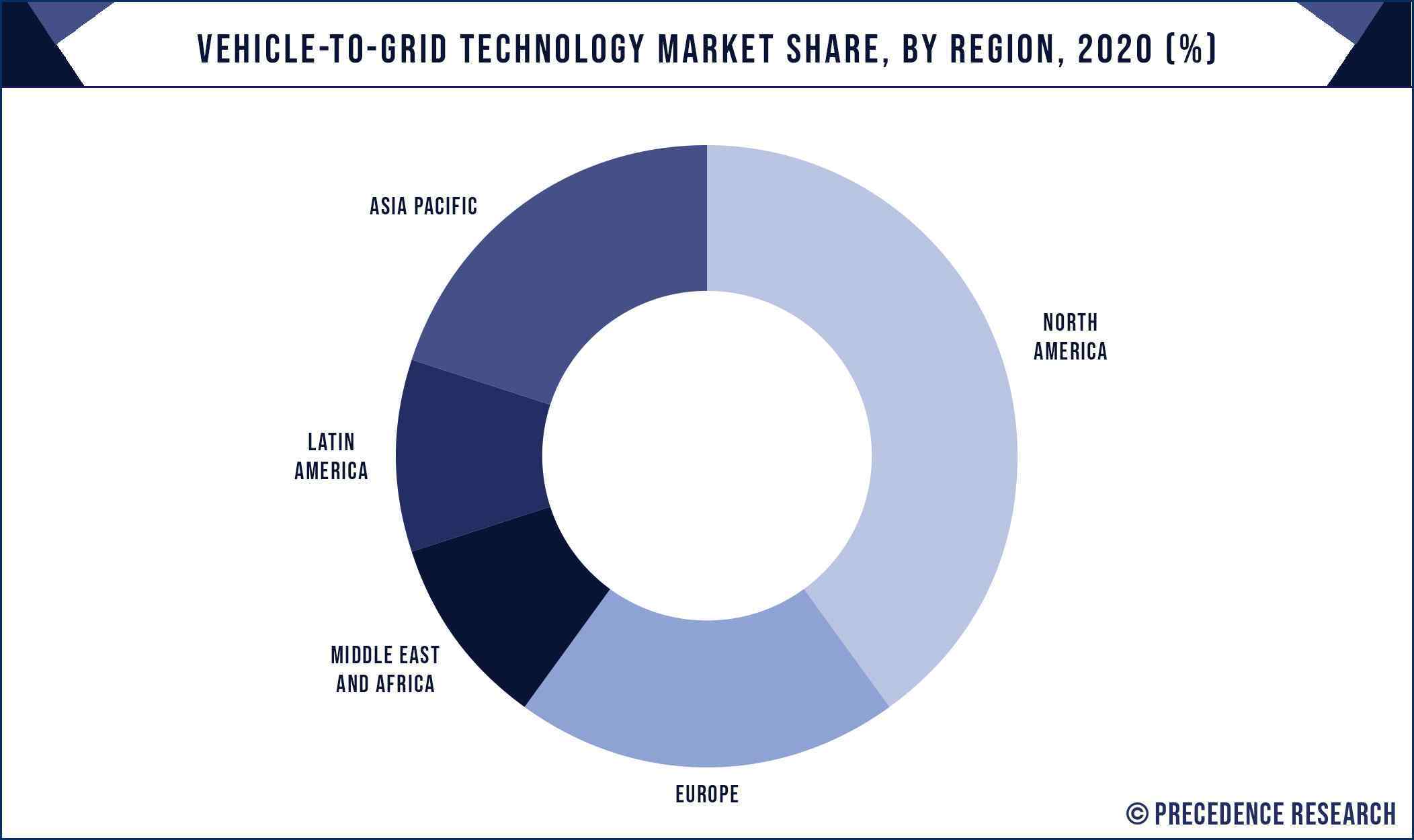 On the contrary, Asia Pacific projected lucrative growth for vehicle-to-grid technology during the forecast period. The prime factors contributing to the significant growth are green revolution drives in Asian countries such as China, Japan, India, and South Korea. For instance, China has vision of fully electric-powered mobility in the region by 2025 and is investing significantly for the same.

Automobile batteries that have been developed recently have a longer operational life and can withstand repeated charging cycles without deterioration. Furthermore, the introduction of vehicle-to-everything technology as an extension of vehicle-to-grid with a smaller size, lighter weight, and easier installation process is fueling market expansion. The market is expected to be driven by massive infrastructural developments and the implementation of favorable government policies boosting smart grid initiatives.

The global vehicle-to-grid technology market is highly competitive with prominent on-going developments in the market. The market players are largely focused towards technology investment, partnership and merger & acquisition strategy for cementing their footprint in the market. 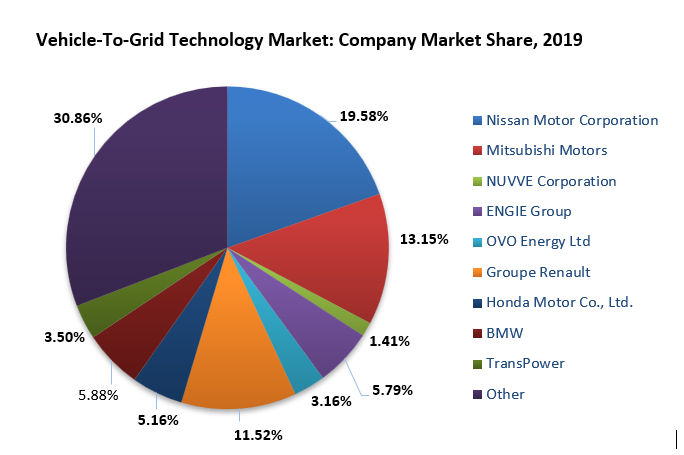 In June 2018, Hitachi and Mitsubishi collaborated together to establish vehicle-to-grid charging network for PHEVs and BEVs at several places in Japan. Similarly, in June 2019, ENGIE entered into an agreement with Fiat Chrysler Automobiles (FCA) to offer new electric-powered mobility solutions in fourteen different countries of Europe. The company planned to offer FCAs with its charging station for its customers and dealers in Europe. Thus, significant initiative from auto-manufacturers to promote the vehicle-to-grid technology has prominent impact on the market growth.

Nuvve Corporation and EDF Group formed a strategic cooperation in December 2018 to promote the latter's electric mobility goal. The two companies are anticipated to create electric vehicles and vehicle-to-grid solutions for the European market as a result of their relationship.

OVO Energy Ltd declared a strategic investment from Mitsubishi Corporation in February 2019 in exchange for a 20% share in the company. This funding will be used to expand into new markets in Europe and Asia Pacific, as well as to accelerate the development of Kaluza, the company's unit for intelligent energy solutions.

Some of the prominent players in the vehicle-to-grid technology market include:

This report analyses and projects market revenue and growth trend at global, regional, and country levels and offers an analysis of the modern industry developments in each of the sub-segments from 2016 to 2027. This research report bifurcate global vehicle-to-grid technology market on the basis of component, application, and region: