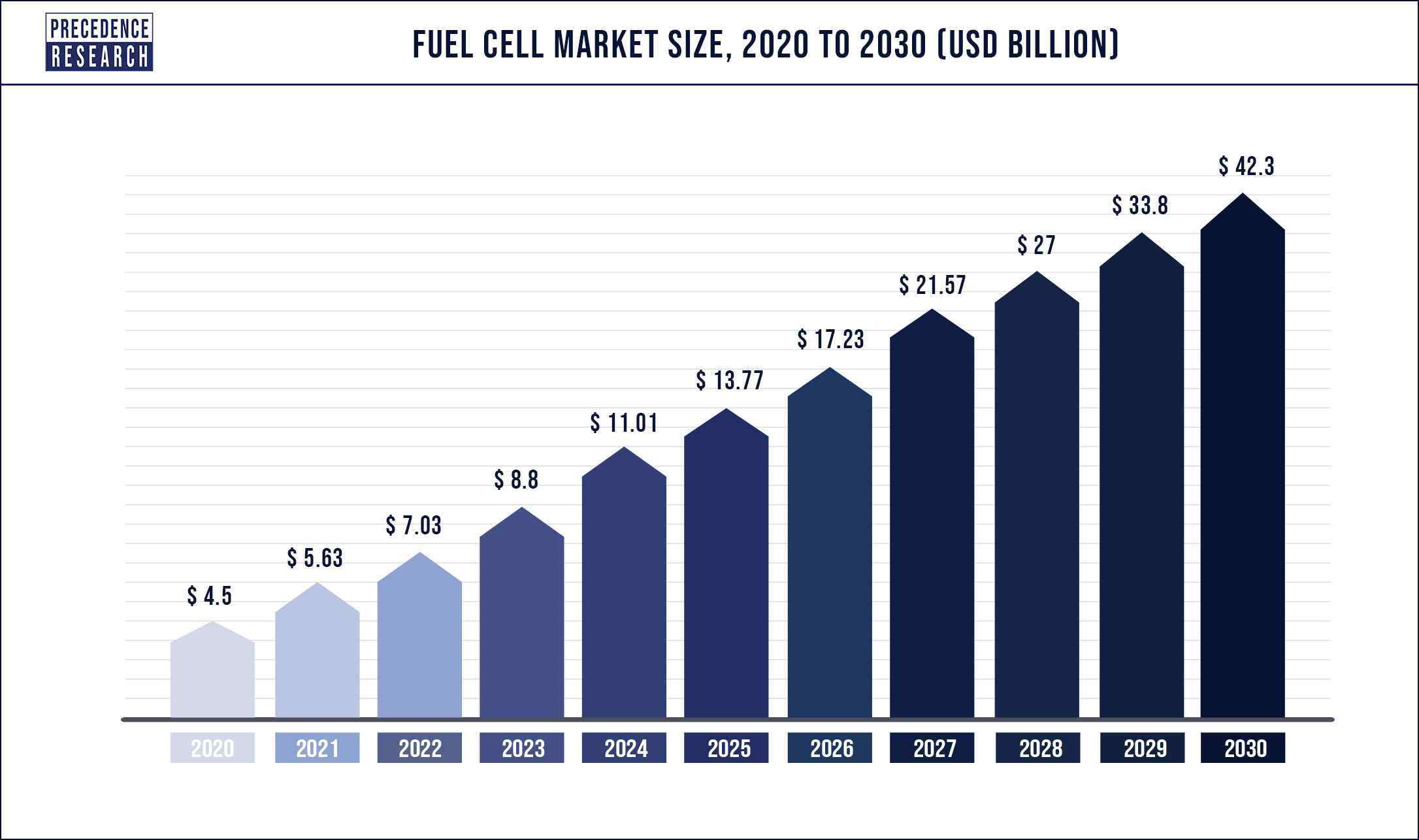 A fuel cell generates electricity using the chemical energy of hydrogen or other fuels in a clean and efficient manner. Water, electricity, and heat are the only results when hydrogen is used as a fuel. Fuel cells have a wide range of applications, including industrial, residential, transportation, commercial structures.

Fuel cells have a number of advantages over traditional combustion-based technologies, which are being employed in a number of power plants and automobiles. When compared to combustion engines, fuel cells emit fewer or no emissions. As hydrogen fuel cells emit only water and no carbon dioxide, they can help to address crucial climate issues.

The major market players are taking enormous steps to increase their market position throughout developing countries, including increasing research and development investments and constant mergers and acquisitions. The product deployment is being aided by ongoing technology advancements and a decrease in the overall cost of fuel cell installations. The rising government investments in the construction of hydrogen-based infrastructure, together with the rising demand for fuel cells electric vehicles, are expected to propel the growth of the fuel cell market.

Furthermore, rising demand for portable devices, strict government restrictions aimed at reducing rising pollution levels, and improved fuel cell efficiency are some of the fuel cell market’s major driving factors. The influence of these factors is projected to grow dramatically as the benefits of fuel cell become more widely known. The high cost of the catalyst, which boosts the cost of the fuel cell, and the absence of fuel cell infrastructure are factors hindering the growth of the global fuel cell market during the forecast period.

The implementation of favorable regulations and incentives to encourage the use of renewable energy, as well as increased financing for electrification of distant and off-grid areas, is expected to boost the system installation. The adoption of various investment projects aimed at putting a greater emphasis on distributed power generating techniques and expanding fuel cell setup would boost the growth of the fuel cell market. However, product implementation has several key limitations, including insufficient infrastructure, hydration, and excessive fuel cell costs, and storage.

The growing consumer awareness of clean energy solutions, as well as an increase in the use of favorable governmental subsidies to promote fuel cell electric vehicles, will boost the product demand in the transportation sector. The recent technological advancements, such as the incorporation of high efficiency portable technology, are more likely to create lucrative opportunities for the growth of the fuel cell market during the forecast period.

Scope of the Fuel Cell Market 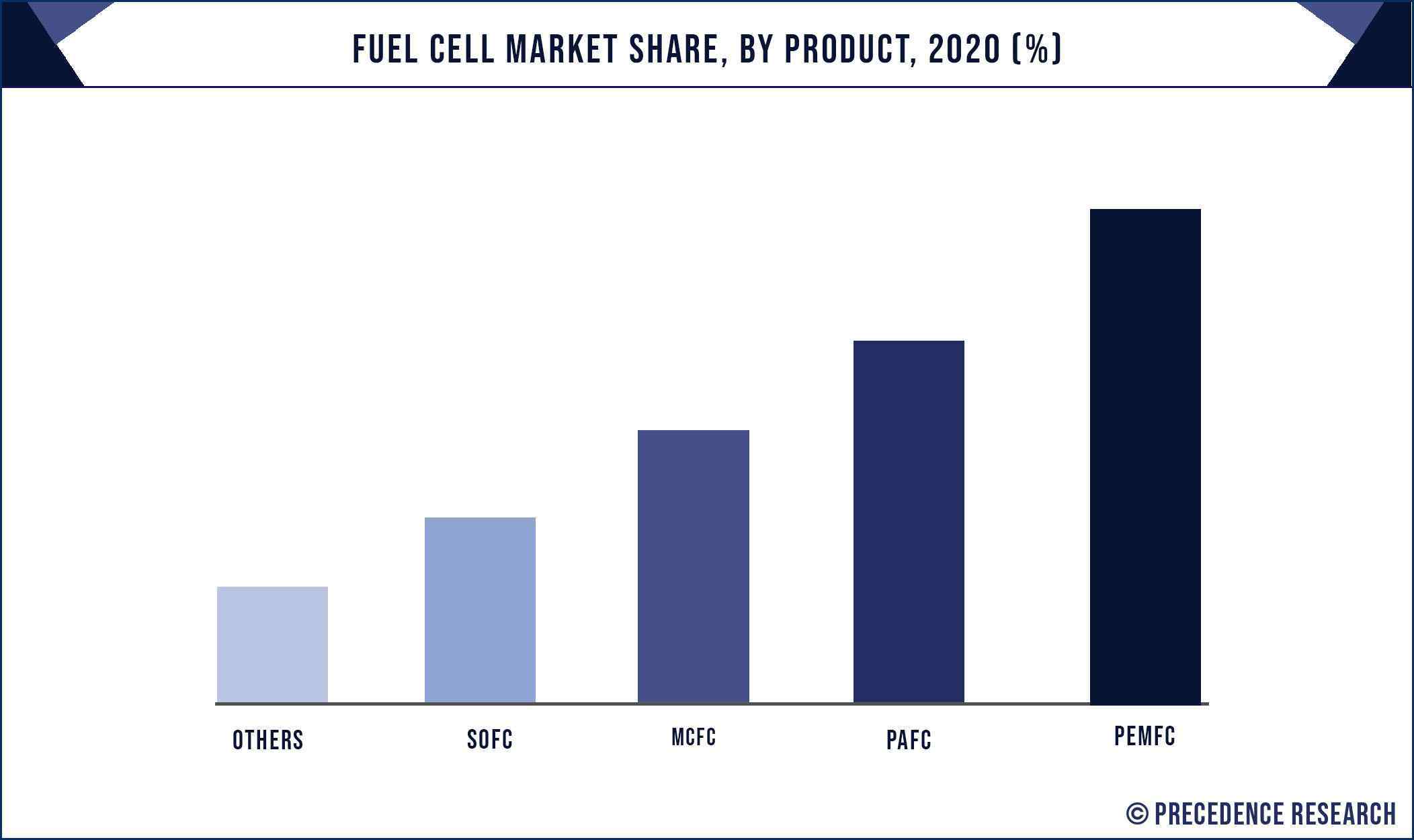 The transportation segment, on the other hand, is predicted to develop at the quickest rate in the future years. Due to the growing demand for fuel cell automobiles and fuel cell powered forklifts, the transportation application segment is predicted to increase at the quickest rate over the forecast period. Moreover, the industry is expected to grow due to increased research and development activities in the developed and developing countries to produce hydrogen powered hybrid vehicles.

North America dominated the fuel cell market in 2020. This is due to the presence of supportive legislation in the North America region aimed at reducing carbon emissions, as well as the availability of financing for fuel cell research and development initiatives.

Asia-Pacific, on the other hand, is expected to develop at the fastest rate during the forecast period. The expansion of the fuel cell market in the Asia-Pacific region has been propelled by policies and strategies that encourage fuel cell systems for transportation applications in India, China, Japan, and South Korea.

The major market players are highly investing in research and development to improve the technical features of fuel cells and modules, which offer cheaper battery costs, longer life, and greater performance. Several strategic initiatives have been attempted by industry players, including supplying varied product ranges, joint ventures, mergers, acquisitions, and collaborations. These tactics help firms and market players to gain a stronger presence in the global fuel cell market.

Some of the prominent players in the global fuel cell market include: