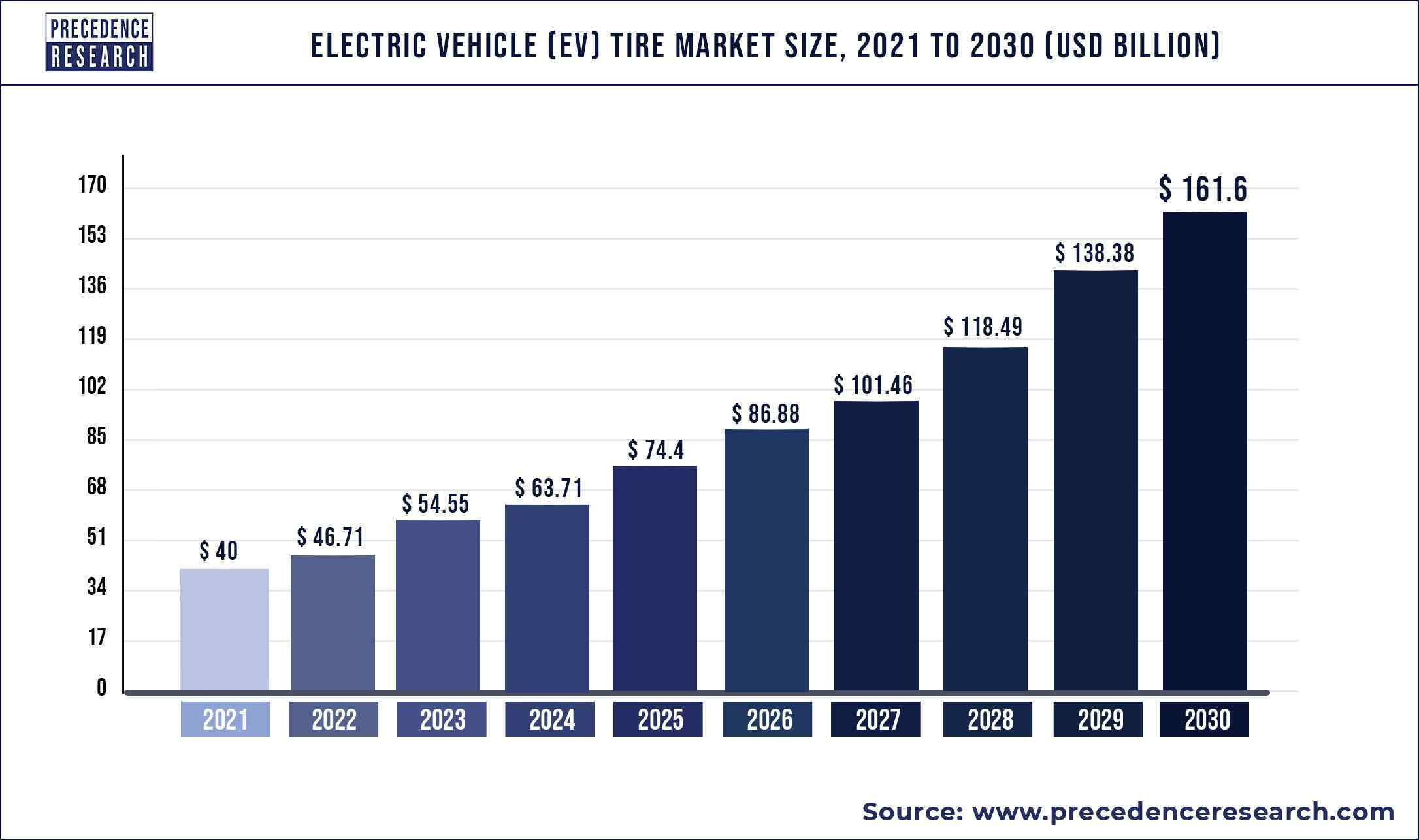 A huge preference has been shown towards artificial intelligence in place of the manual operated machines. The market is currently driven mainly by the increasing demand for automated vehicles having advanced safety features with easy to use interface. The launching of the 5G network has also proved to be a boon for the current market, owing to which the electric vehicle tires market showed a tremendous growth during the forecast period. Modern technology clubbed with upgraded version of designs and looks have attracted the market towards the use of advanced equipments. The modern techniques used to design the electric vehicle tires have made them lighter in weight which provide a better economy on road as compared to its rivals. Increased torque which is required to move a vehicle from halt has also affected the market to a great extent. This leads to greater use of energy in the initial phase of a drive with these vehicles. This affect on the initial phase affects the total average provided by the machine. The wall size has also been altered for these tires which show its significant impact on the vehicle's performance.

The growing concentration over the performance of the tires with respect to the number of years it can serve on road, the maintenance factors included during usage of the products, the safety features provided by the tires on road and the technological advancements made for the longer life of the tires have encouraged the leading market players to develop better products overtime. The electric vehicles usually requires better and advanced tires as compared to the internal combustion vehicles pertaining to the increased body weight of the vehicle as a whole along with the batteries which in turn makes a huge impact on the total resistance it presents during the initial motion of the vehicle from a state of rest.

The outbreak of the covid-19 pandemic had disrupted the manufacturing process of the electric vehicle tires pertaining to the reduced transportation facilities available. The strict lockdowns imposed by the various governments had hampered the growth rate of the electric vehicle tires market. Hampered transportation facilities and services had created a shortage of the raw materials that are required for the manufacturing of the electric vehicle tires. Moreover the demand and supply chain of the tires had been disrupted to a great extent. Delay in the supply of the desired products had led to cancellation of huge orders which hampered the total revenue return of the industries. However substitutes were not a second choice as maintaining the quality for the new launching market was essential.

The increased use of batteries instead of using combustible fuel options has boosted the eco-friendly market tremendously. These tires give out less noise as compared to the normal ones due to which unnecessary noise pollution is avoided. On the other hand due to lesser noise provided by the engine the cabin of the vehicle is relatively quieter than its rivals, which in turn gives in the noise of the tires into the chamber. Reduced carbon emissions by the vehicles makes its a primary choice for the market and has become the need for the hour. Better wet grip is provided by the electric vehicle tires which provide a low rolling resistance to the vehicles thus making it easier for the entire body of the vehicle to fall into motion. This low rolling resistance also reduces the braking time of the vehicle and reduces the distance covered when urgent brakes are pressed on. Hence increasing the safety levels for the people outside the vehicle as well as inside.

The heavy weight of the batteries makes the overall vehicle quiet heavy and thus reduces its economy. The development in the batteries sector will positively impact the sales of the electric vehicle tires market. The increased weight of the overall vehicle in turn gives better rigidity and sturdiness on the road during the drive. The cruise measurements can be more accurate pertaining to the quieter rides as a result of the advanced tires technology and reduced noise inside the cabin of the electric vehicle. The reduced rolling resistance has reduced the use of energy for the initial motion of the body of the vehicle from a stationary position which results in saving of energy for further use on the road, thus improving the overall economy of the electric vehicle. A higher range of distance can be spanned with a single battery which is fully charged. Increase in the number of batteries increases the total weight of the vehicle which can show its impact on the average economy of the vehicle.

The largest market share has been acquired by the OEM pertaining to the heavy sales seen in this sector for EV operated vehicles. The increase in the usage of electric operated public transports in the developed cities and urban areas has also increased the sales of the tires in these regions. 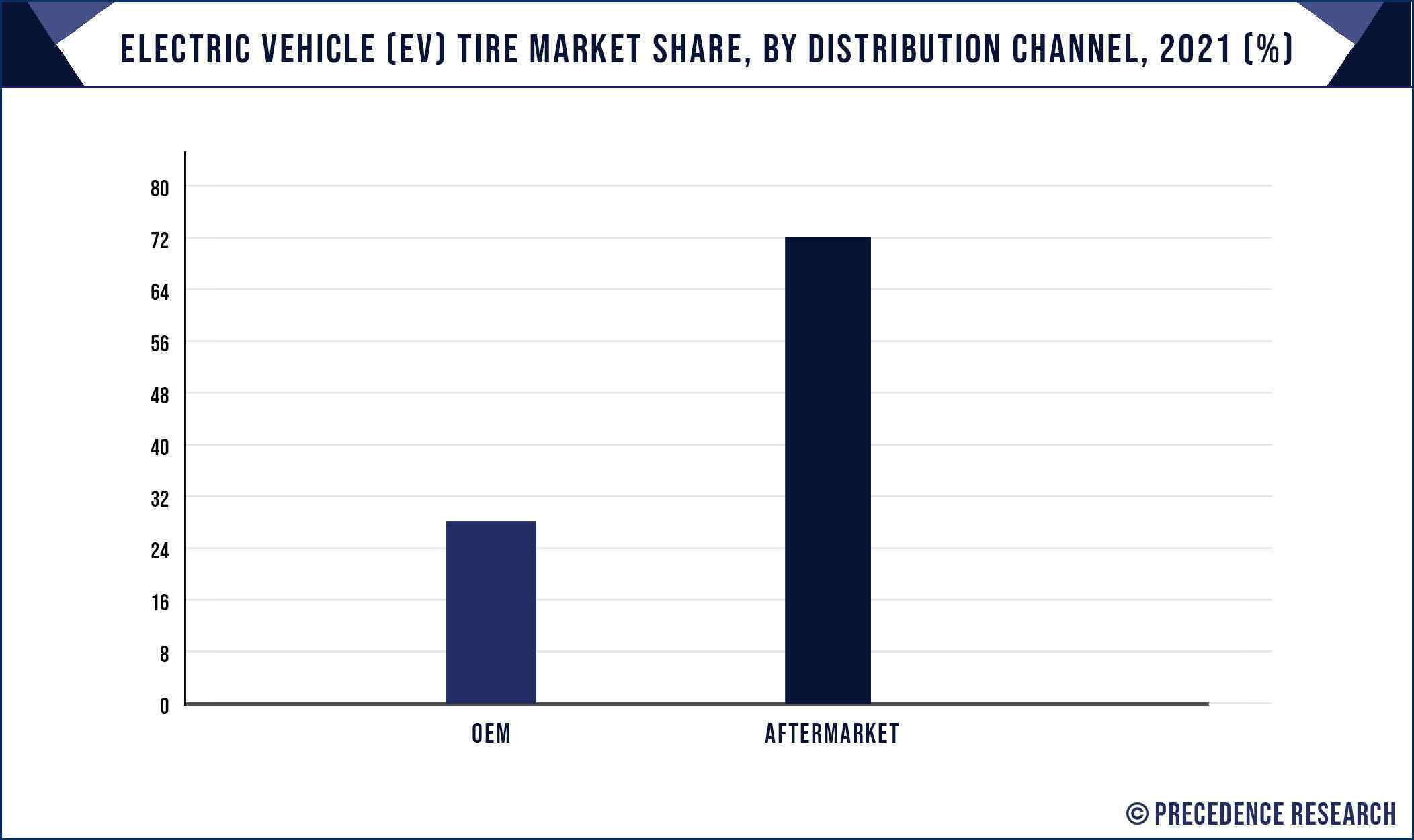 The aftermarket segment in this sector has a secondary place of importance pertaining to its remanufacturing, distribution, retail sales and fixing processes. The original equipments manufacturers have an upper hand over the market owing to the authenticity of products it provides to the consumers. The world will further see a growth in the sales of the electric vehicle which will boost the market to a great extent.

Amongst two wheelers, passenger vehicles and commercial transports, the passenger vehicles are expected to boost the market. The recent development made by the government regarding the benefits for the purchase of electric vehicles has attracted the market towards it. People are opting for the electric vehicles to reduce their travelling cost and take full advantage of the government initiatives. Private vehicle owners prefer to travel by electric vehicles rather than fuel operated vehicles. The increase in the number of individuals opting for jobs outside their native regions also increases the number of private vehicle owners. This increases the number of passenger vehicles in the market. Commercial transports hold a secondary place in the market. The increasing number of people opting for public transports for daily travel has boosted this segment of the market. The government has also taken various initiatives regarding this and boosted the market during the forecast period.

The technology types introduced in this segment are radial bias and composite. Where, radial tires are seen to capture the market better than its competitors. The active participation of the manufacturers in the R&D of the technology has proved to be fruitful for the company. The radial type of technology shows tremendous momentum during the forecast period. The compatibility shown by the radial type of tires has enhanced the total output provided by the electric vehicles. The increase in the safety features provided by this technology has also increased the demand in the market. This technology provides better performance as compared to its rivals or counterparts when utilized on road. The chances of tire damage are too reduced to a great extent pertaining to the advanced technology used in the manufacturing of the product.

The North America region shown a tremendous growth owing to its rapid shift to electric vehicle s compared to the internal combustion engine vehicles. Increased awareness among the people as helped to boost the market to a great extent. The other regions which facilitate the market growth are India, China and other Asia Pacific countries which are in their developing phase of economy. France and Germany also provides great opportunity to the electric vehicle tires market which helps to achieve he target during the forecast period. The increasing shift to ecologically sustainable technologies and developments has propelled the market for the electric vehicle tires market.

Ecorun A-A, which was developed in May 2018, by Falken, which is a Japanese company. This company has joined hands with Toyota to develop an electric vehicle. Here A stands as the standard for wet grip performance and also for its efficiency on road. This is a major development which is aimed at achieving a substantial growth during the forecast period.

Michelin, in March 2021, introduced the production of a developed tire type which aims to reduce the noise during propulsion. This change was almost about twenty percent as compared to the earlier state. Thus providing a quieter environment for the user and the consumer. It has least possible carbon emissions produced during its run on the daily basis. It's sport EV tires and e Primacy have been aiming at providing a seamless experience for the consumers when utilizing the vehicle in real life. These factors aim at boosting the market during the forecast period.