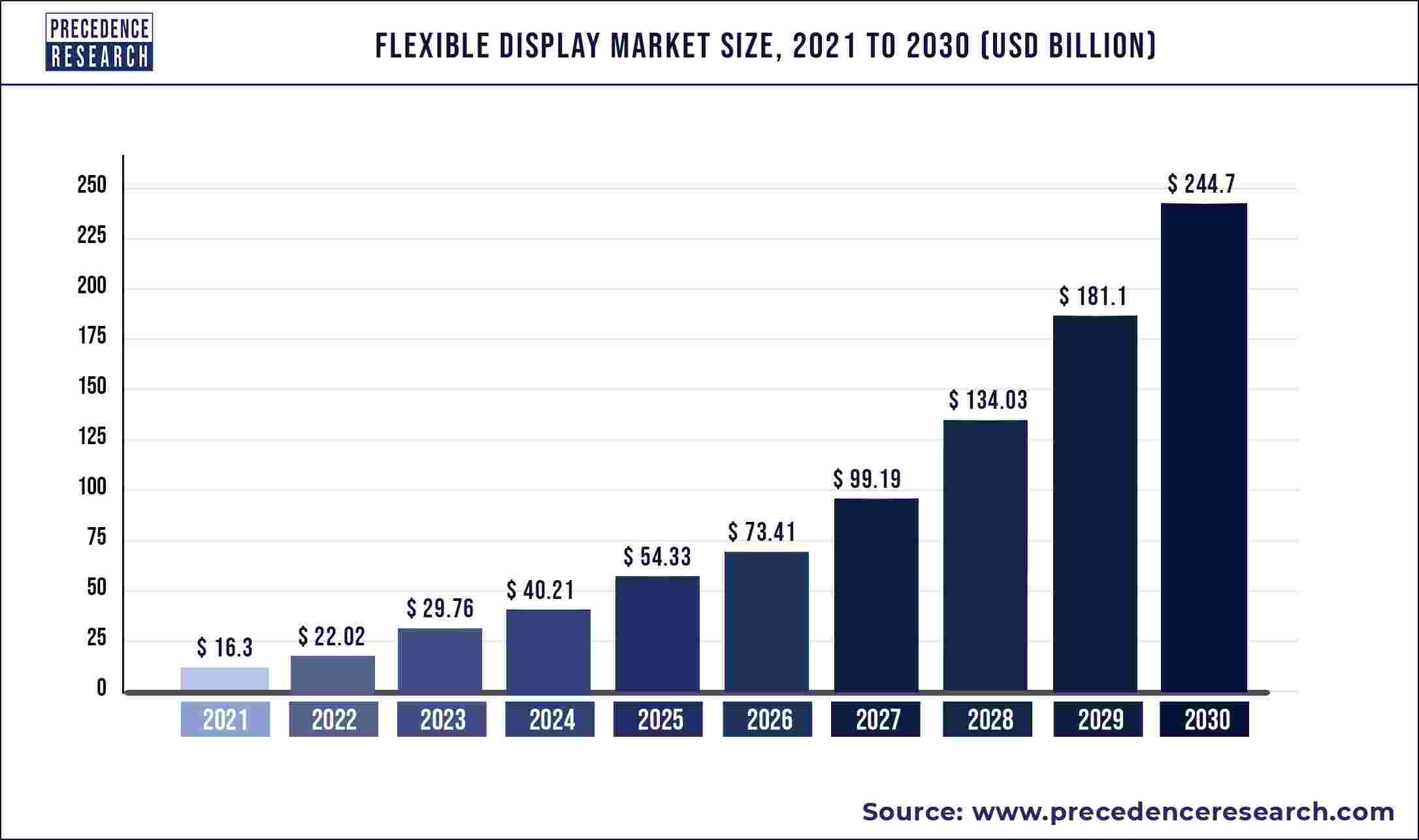 A particular polymer compound is used in order to manufacture a flexible display for the screens in order to increase the lifespan of the device. These flexible displays are mainly used in the electronic gadgets and devices that have touch facilities. The rapid demand which has been seen in the market for flexible displays has proved to be a major driving force for the growth of the market during the forecast period. The pressure which has exerted on the screen while pressing and moving the finger over the display how's the negative impact on the internal electrical settings of the motherboard. This pressure is absorbed with the help of the use of flexible plastic displays.

The use of curved displays has been observed in the recent devices in order to provide better viewing angle and brightness. The manufacturing process involved and making of the flexible displays is very complex and has to be performed in a number of stages which requires a major role of the skilled labor force. Absence of skilled manpower proves to be a major restraining factor for the growth of the market. daughter types of displays which are available in the market require less manufacturing stages and provides a superior quality of touch during usage. The rigid type of displays provides a better performance and response to the touch as compared to the flexible ones. Along with the use of flexible displays the consumer has to bear with the slow speed of response received from the device. As a response against shock the flexible display provides or delayed response to the touch.

The flexible displays are usually very sensitive to rapid changes in temperature which makes it less durable as compared to the rigid display options. The increasing competition among the key market players in order to provide better services and facilities to the consumers proves to be a restraining factor for the growth of the market. The use of a rigid display helps to provide additional protection to the internal electrical circuit and motherboard of the device. Your rigid displays also provide a premium touch experience and provides a better response to stimuli which makes the device faster as compared to the flexible display technology.

The outbreak of the pandemic had a significant impact on the flexible display market as a result of the constant lockdowns imposed by the government globally. The shortage in raw material which was faced by the manufacturing companies proved to be a restraining factor for the growth of the market. The lack of transportation facilities hampered the manufacturing process and created a shortage of spare parts in the assembling plants. The demand for advanced technologies and newly launched electronic devices faced a rapid decline as a result of shortage of disposable income with the people. The exposure of extreme climatic conditions proves to be a challenging factor for the growth of the flexible display market.

The huge demand for smart watches and advanced smartphones has boosted the demand for flexible displays in the market. The flexible displays have facilitated the introduction of curved edges which are seen in the recent smartwatches and smartphones. This recent feature has attracted many potential consumers which has proved to be a major driving force for the growth of the market during the forecast period. The increasing demand for smart wearables has proved to be a great opportunity for the growth of the market. The increased resistance to shock and damage which is provided by the flexible display proves to be a major growth factor for the market. The demand and supply for smart devices has increased with the rapid research and development carried out by the key market players in order to record a considerable revenue return.

On the basis of technology, the OLED type has dominated the market as a result of its rapid demand among the people. The displays that are used for the smartphones are usually rigid in structure as a result of the glass layer that is made use of in the manufacturing of the display. With the introduction of the OLED system this problem has been solved considerably by increasing the lifespan of the screens and displays. This material is highly flexible and can bear a great amount of shock which makes it more durable and compatible with the daily wear and tear. It is mainly made of material which is organic and emits light with the help of electricity being passed through it. 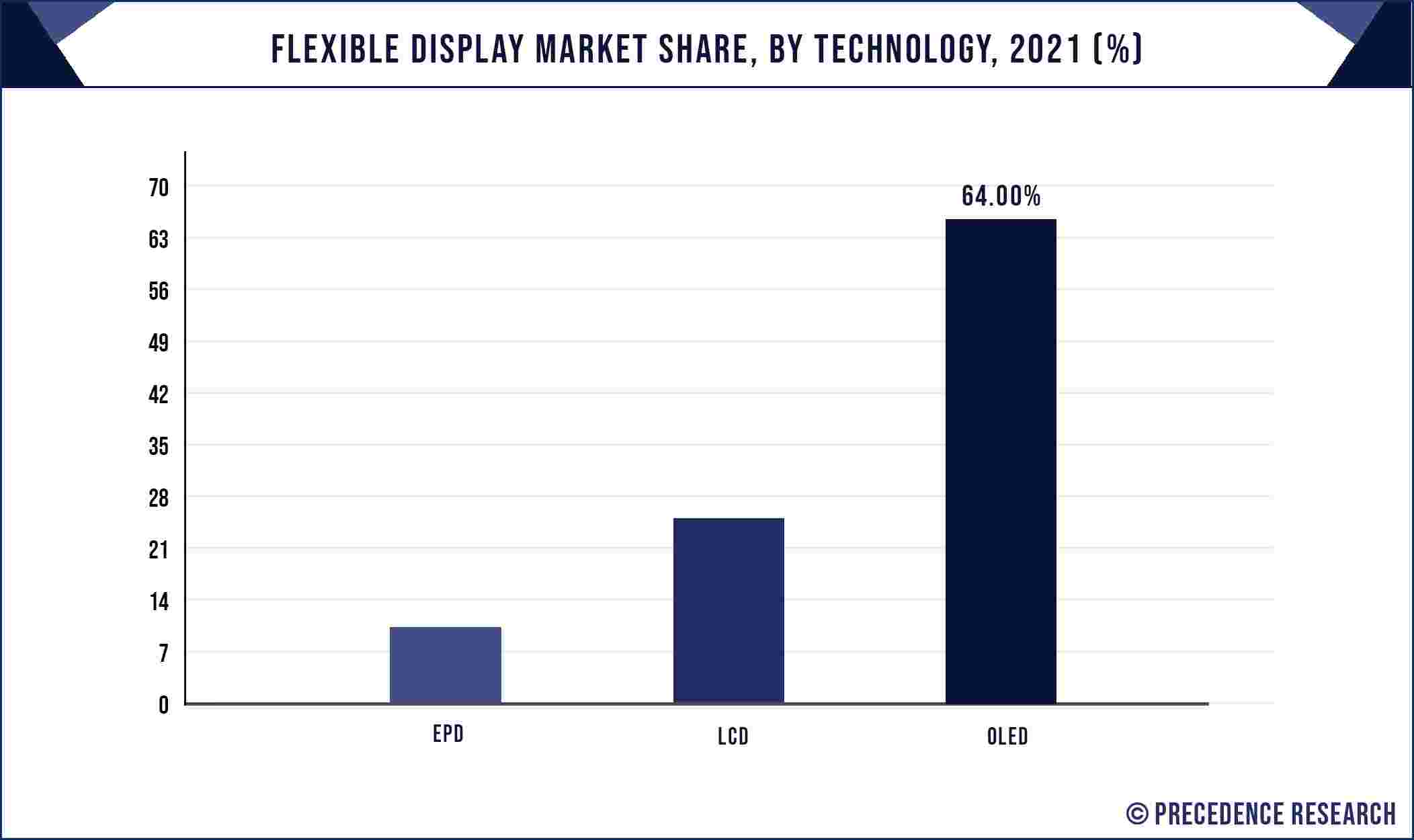 A thin layer of plastic is then placed over the display in order to protect it. This thin layer is unfortunately prone to get scratched easily. The design of the displays is very attractive and flexible. The technology of this display has evolved to a great extent during the recent years which has improved its quality and enhanced the lifespan of the product. The premium visual experience which is provided by this display with the help of wider color ranges, good contrast, premium image quality, higher brightness, lower power consumption, durability and fuller viewing angle. This type of display has been adopted by numerous fitness brands as well.

On the basis of application, the automobile sector has proved to be the largest market for the flexible display as a result of its extensive use in this industry. The use of flexible displays in the interior of the vehicles has been kept under focus by the key market players in the automobile industry. The interior of the vehicles is being developed in order to make them more interactive with the consumers with a view to provide a premium and customized experience. These surface areas are going to be modified in the form of touch displays to make the vehicle more interactive and engaging. The use of curved displays will be greatly seen in such vehicles to provide greater flexibility and durability to the material.

The safety features of the vehicle will be enhanced with the help of wider visual angles that will provide a better view to the driver and the passengers inside the vehicle. With the rapidly increasing demand for automatic transmission in the automobile sector the use of flexible displays has increased to a great extent. The rapidly increasing disposable income in the hands of the people has supported the growth of the market to a great extent. Smartphones and television displays are included under the segment which make use of flexible displays extensively. The use of smart watches has increased with the recent development of technology. With the increasing use of flexible displays the durability and lifespan of the devices has been enhanced considerably.

On the basis of material, plastic has dominated the segment as a result of its high durability and flexibility which helps to increase the lifespan of the devices. The use of plastic has been extensively made in order to reduce the production cost of the devices which makes it easier on the pocket of the consumers.

The use of plastic has also improved the shock resistance of the devices which proves to be a major driving force for the growth of the market. The use of glass becomes very risky for the devices as it is prone to be damaged very easily. The aftermarket services which are provided for plastic displays is it better as a result offered its flexibility.

On the basis of geography, the Asia Pacific region has dominated the segment as a result of the massive demand from the people regarding increased durability of the devices. The high demand of smart phones and smart watches which has been observed in the countries belonging to this region has proved to be a major driving force for the growth of the market. China and India have proved to be the potential customers for the flexible displays market.

In August 2020 - a smart phone company, Nubia disclosed the introduction or for smart wearable product which has a flexible AMOLED display. Various advanced features have been observed in this smart watch which is having a curved shape such as sports and health tracking. The message notifications can be received on this device too. An advanced visual experience along with stunning panoramas is offered by this display.

In September 2020 - In the virtual event held at Galaxy unpacked 2020, Samsung introduced the Galaxy Z fold 2. this is a foldable phone which is considered to be the 3rd model in the series which started in 2019. Many advanced features have been observed in this new device which has attracted potential consumers.