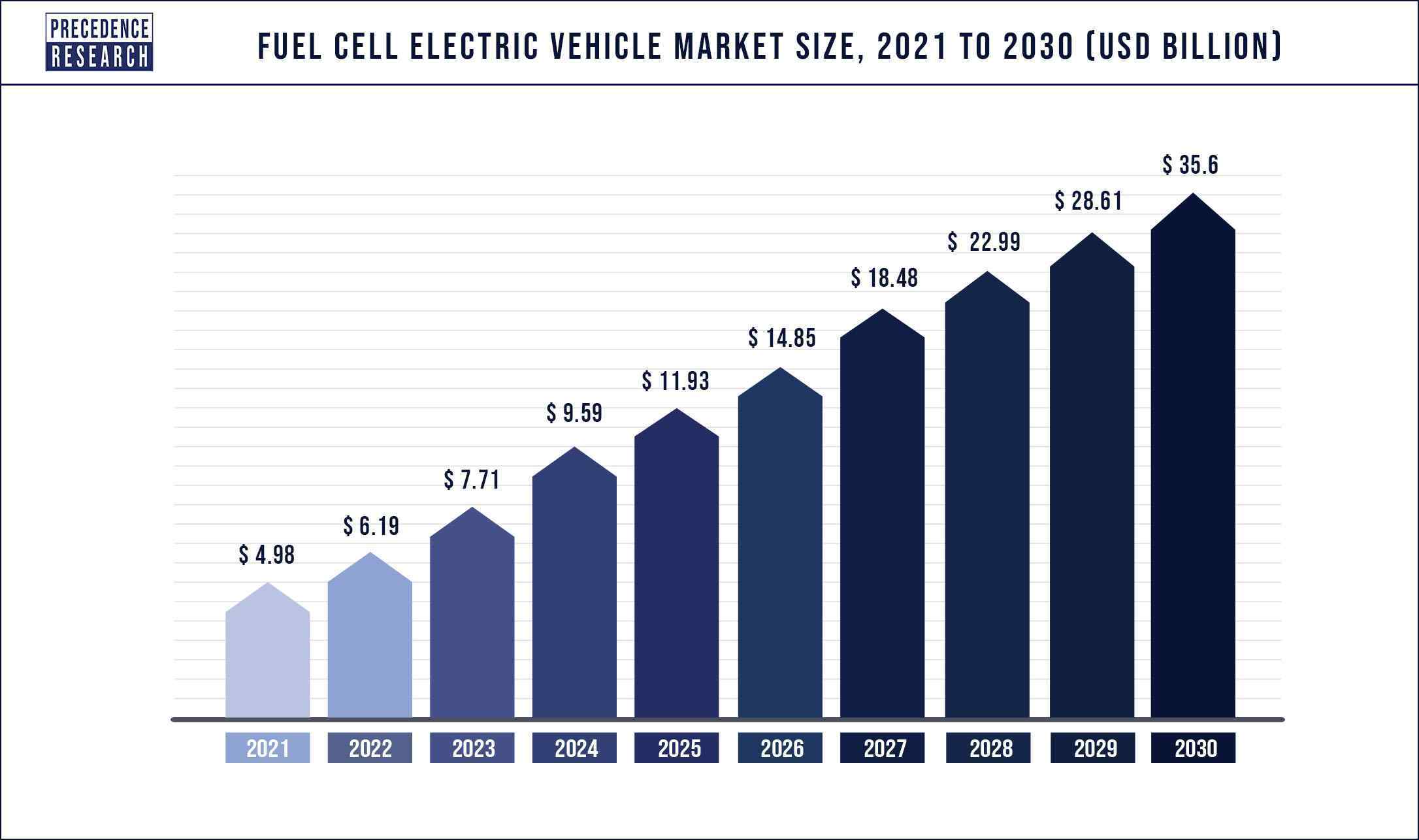 The fuel cell technology is not yet capable of delivering very high our needs associated with different circumstances. In a declaration by Japan, it's stated of being carbon neutral by the year 2050. As an awareness related to the benefits of good air quality and the bad effects of regular emissions is driving the market. Governments are taking initiatives to invest and enhance the infrastructure for the electric vehicles. Further helps in expanding the market. Various technological advancements and increased number of refueling facilities are helping the market grow. Rapid industrialization and expansion of the production facilities is fostering the acceptance of fuel cell electric vehicles in Asia Pacific region. A major challenge ahead of the FCEV market is high investment required for the electric vehicle charging infrastructure.

However, there are increasing investments from the government as well as the private sector. In the development of this infrastructure, so the market is expected to grow. The FCEV market was badly impacted by the COVID-19 pandemic. Due to lockdowns and restrictions on traveling the production and delivery was delayed. The raw material supplies were also delayed. However, post pandemic, there has been a recovery as there is an ease on restrictions and there are supportive government policies. The FCEV use a fuel cell to convert or transform the chemical energy in oxygen and hydrogen directly into the electrical energy. The hydrogen is supplied from an onboard storage tank, while the oxygen is derived from the air. If economical FCEV’s are developed they will reduce the dependency on oil and help in combating global warming.

As a result of strict vehicle emission regulations in many nations across the world the fuel cell electric vehicle market shall boom. In North America, stringent rules are made for the emission regulations, which make North America the greatest market. In the European countries, the governments are investing in the development of the fuel cell electric vehicle technologies because driving the global market. In Asia Pacific region, adoption of electric vehicles is leading to a growth in this market. The FCEV’s market provides low emission mobility solutions. Latin America is also adopting this technology.

Owing to the benefits like improved efficiency, zero emission and lower refueling time, the segment is expected to grow in the forecast period. Various participants of this segment are adopting various collaborations and partnerships in order to strengthen their foothold in this market. Rapid industrialization and extensive production facilities, which are made available, are helping in penetrating the market. As the private sectors and the government sectors are investing for building the infrastructure, growth is expected.

The vehicle segment can be further classified in two bus, truck, passenger vehicles and light commercial vehicles. As there are stringent norms to eradicate the vehicle pollution the category of the passenger vehicle is expected to have a larger market share. As there is a rising per capita income the passenger vehicles are expected to have a larger market share. Consumers are demanding for clean personal mobility. Countries are planning to convert the taxis and cabs into fuel cell electric vehicles for eradicating the pollution. By the year 2040, South Korea is targeting to deploy around 1,20,000 fuel cell vehicles.

The market for the proton exchange membrane fuel cell is anticipated to have a great share. It provides features like high power density, less startup time and lower working temperatures that act better than the other sub segments.

The range segment covers short range distances and long range distance is covered by the fuel cell electrical vehicles. The short distance segment is expected to reach 45% growth from 2022 to 2030. In comparison to the long range category, the short range category will witness a faster growth as there is a rising demand for low emission vehicles for commuting everyday. The consumers are giving a preference to FCEV’s In order to cover shorter distances for traveling or commuting. In order to transport goods within ports and airports, many companies are making use of FCEV’s. Many transport vehicles are used for covering short range distances to eliminate their carbon footprints.

The fuel cell electric vehicles in the Asia Pacific region is expected to have a good market size. In order to curb pollution levels and the ban on diesel engines that is stringent government policies in place. In order to accept these vehicles the Asia Pacific region is making policies. Across the country the construction of 1000 refueling stations will be done by 2030 in order to meet the industry demand with the stringent regulation policies in place.

Tata Motors bagged and order of 15 hydrogen based fuel cell buses from Indian Oil Corporation Limited in the year 2021. The Renault Group and the Plug Power launched the HYVIA joint venture in the year 2021 which is a fuel cell light commercial vehicle.

Toyota's fuel cell car had a Guinness World Record in the year 2021 with the 845 Mile zero emission Drive, which happens to be the longest distance covered by any hydrogen fuel cell electric vehicle without refueling needed.

Volvo AB and Daimler trucks teamed up in 2021 to produce hydrogen fuel cells for long haul trucks.30 countries have announced over 228 large scale hydrogen projects which will promote the fuel cell vehicles and the hydrogen refueling stations. France is aiming for fuel cell passenger cars of up to 5000 in number, which will be light duty vehicles, 200 buses and trucks by the year 2023. It also aims at 20 to 50,000 passenger cars by the year 2028. The first country in the world to deploy a passenger train is Germany, the train will be on tracks by the year 2023. The United States President signed a bill on December 15, 2021 which invests in the hydrogen industry to curtail the harmful emissions. In December 2020 Canada stated that it has a long term vision for operating more than 5,000,000 FCEVs.  by the year 2050, as a part of their hydrogen strategy for Canada. The only country to have the largest number of fuel cell vehicles in the world is South Korea. South Korea aims by the year 2040. The developmental plan states 2.9 million passenger cars will be running 80,000 taxis, 40,000 buses and 30,000 trucks. The Indian Government has formulated a scheme for electric, hybrid and fuel cell vehicles, which aims to promote the manufacturing of these green vehicles. And make India a part of the global supply chain.