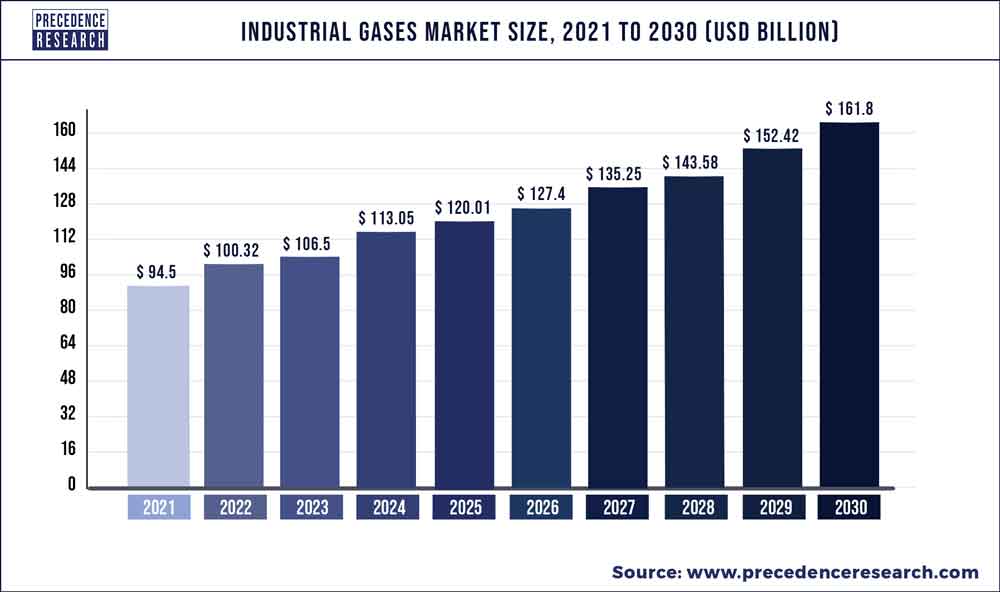 The manufacturing sector's expansion in Asia Pacific's emerging economies is mostly to blame for the market's expansion. Additionally, rising industrialization and urbanization along with an increase in the use of industrial gases in several sectors, including healthcare, metal and mining, and beverages and food manufacturing, are anticipated to have an impact on market expansion in the years to come.

The growth prospects for this market are compelled due to the usage of industrial gas in the electronics (photovoltaic) industry for the production of semiconductors, solar, screens, LED solid-state lighting, wafers, and polysilicon. Solar photovoltaic energy, in particular, is becoming a leading source of sustainable energy generation and drawing in investments on a worldwide scale. These gases significantly lower production costs, which bodes well for a rise in their use throughout the anticipated period. Global industrial production has been increasing, and this trend is projected to continue. There is a rising need for industrial gases in the mining, metals, and aerospace industries, where they are used extensively. Additionally, a number of opportunities for market growth exist as a result of the pharmaceutical, food, and beverage industries' continued expansion in North America, Europe, and Asia-Pacific.

Due to the shutdown of industrial operations in areas severely impacted by COVID-19, the desire for industrial-grade co 2 has also been on the lower side. However, because it is used in firefighting and medicine, consumption of carbon dioxide has been more than usual. The demand for medical-grade carbon dioxide has increased recently as a result of the need for several COVID care facilities around the nation and a few medical uses of carbon dioxide.

Increased use of industrial gases in a variety of industries, including construction, metallurgy, mining, and food service, as well as increased demand for alternative sources of energy are some of the factors predicted to propel the expansion of the industrial gases market over the course of the projected period.

With a 28.10% revenue share in 2021, the oxygen product type had the most contribution. This is well known that it raises the thermal effectiveness of fuel. For the gasification of coal and the treatment of dangerous wastes and contaminated water, oxygen is employed. The healthcare sector also uses oxygen very extensively as well. Therefore, it is anticipated that the demand for oxygen used in industries would grow in the future years due to the extensive usage of oxygen in several sectors. In terms of revenue share, nitrogen gas came in second place in 2021, and from 2022 to 2030, it is expected to rise at the fastest rate. Due to the expanding medical and pharmaceutical industries in North America and Asia Pacific, nitrogen gas is widely employed in the healthcare sector. This is anticipated to fuel the segment's expansion during the ensuing years.

Due to a rise in the use of carbon dioxide for gas-based enhanced oil recovery in countries including the United States, Canada, Mexico, Brazil, and oil-producing nations in the Middle East, carbon dioxide is predicted to see considerable growth throughout the projection period. Additionally, there will be a considerable increase in the use of enhanced oil recovery to boost the effectiveness of oil production from oil wells due to fluctuations in crude oil prices and a growth in the number of mature wells throughout the world.

The cylinder category had the biggest revenue share in 2021 at 37.20%. The section demonstrates the use of packed cylinders for the delivery of gases. But only clients with a moderate requirement for industrial gases can use this delivery technique. Gases including argon, nitrogen, helium, oxygen, and hydrogen can all be compressed into cylinders with ease for cylinder distribution at pressures of up to 300 bars. A number of gases are also present in liquid form at room temperature.

Over the projected period, the on-site category is anticipated to increase at the quickest rate. The setting up of the filling station at the firm facility or another location is included in the on-site section. For the provision of huge amounts of gases at various pressures and states, this technique of distribution is utilised. Since various issues related to the transportation and distribution of hydrogen is eliminated by on-site generation, the market is anticipated to expand significantly. Due to new technologies becoming available at lower prices than provided distribution routes, on-site hydrogen production in small-scale companies has grown in favor.

With a revenue share of 26.10% in 2021, the manufacturing application category is expected to develop significantly during the next nine years. Due to the expanding manufacturing sectors in India, China, Brazil, and South Korea, the need for industrial gases including nitrogen, oxygen, carbon dioxide, and hydrogen is expected to increase significantly in emerging nations. 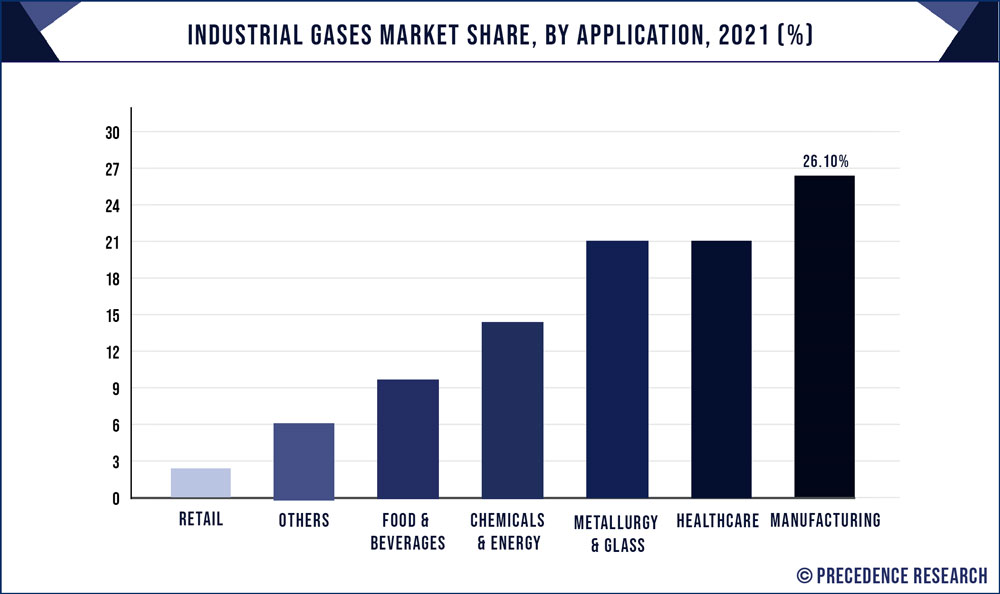 The electronic industry's expanding need for innovative industrial gases is anticipated to further fuel the expansion of this market. Over the projection period, the healthcare application category is anticipated to grow at the quickest rate. The ongoing COVID-19 pandemic has increased the need for medical-grade industrial gases, particularly oxygen. A rise in global healthcare spending is giving this sector a significant opportunity for expansion.

With a 36.40% revenue share in 2021, Asia Pacific is expected to grow at the greatest CAGR throughout the projection period. The development and expansion of end-use sectors in China, India, South Korea, and Japan can be linked to the rising demand for industrial gases in the Asia Pacific region. These nations serve as both the major international and Asian Pacific markets for industrial gases.

China became the largest market at the national level. Because the aerospace industry is increasingly in need of high-quality gas solutions, Asia Pacific had the highest demand for industrial gases in 2020. Additionally, it is anticipated that throughout the projection period, there will be plenty of chances for market expansion due to the huge growth of the food, beverage, and pharmaceutical sectors in emerging economies like China and India. The U.S. had the greatest revenue share in the North American market in 2020, and it is anticipated that it would have the highest CAGR throughout the forecast period. The region's expanding healthcare and electronic sectors are probably going to help the North American market expand. Additionally, it is projected that the market would develop due to the rise of the industrial sector in the area.