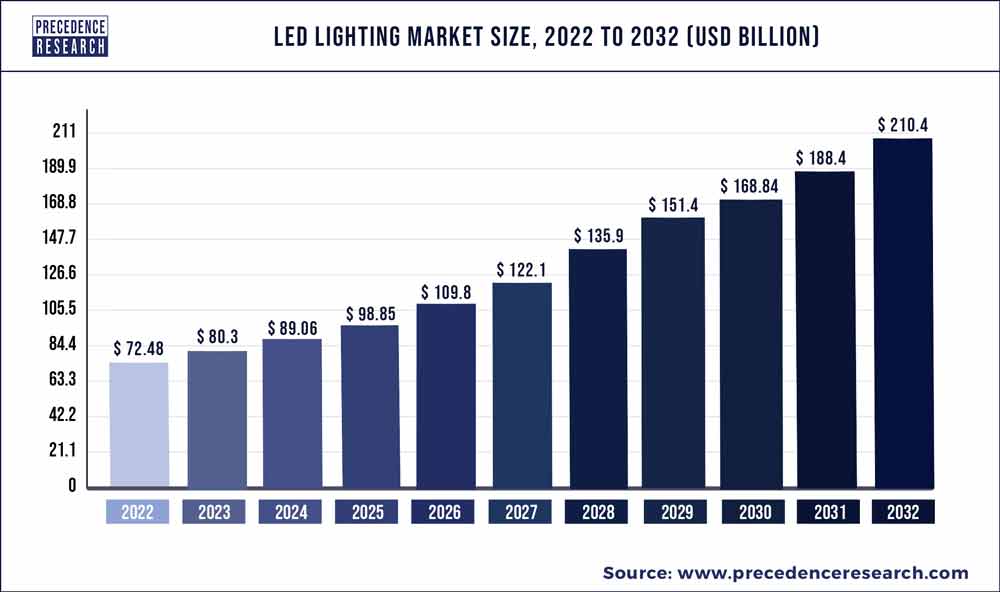 Plummeting cost of Light Emitting Diode (LED) along with the transformation in energy policies across the globe drives the market growth for LED lighting. Government of various regions offers rebate and attractive incentives for the application of LED lights over the conventional lights, expected to proliferate the growth of LED lights in the coming years. LEDs are highly reliable, efficient, and yield longer life span compared to others. They are cost-effective and deliver nearly 50,000 hours of illumination with less amount of energy consumed. Low cost of LEDs and less amount of heat dissipation makes them a preferred choice for customers over the incandescent lights.

Besides this, lack of awareness regarding payback period and installation cost may hamper the growth of LED lighting market in the coming years. However, rising investment from governments of various countries for smart cities, smart transportation, smart industries, and application of numerous smart technologies in different applications drive profound growth for the LED lighting market over the analysis period.

In 2020, LED luminaries occupied major market value share of around 57% in the global LED lighting market and expected to exhibit substantial growth over the forecast period. Luminaries are largely used in industrial and commercial applications. It includes lights used in high bays, streetlights, troffers, track lights, downlights, and suspended pendants for various applications. They are costlier than LED lamps thus contribute large amount of revenue to the global market. Further, the luminaries are easy to control and provide more light per output power as well as they permit designers to use proficient designs that illuminate the same area using less amount of light. 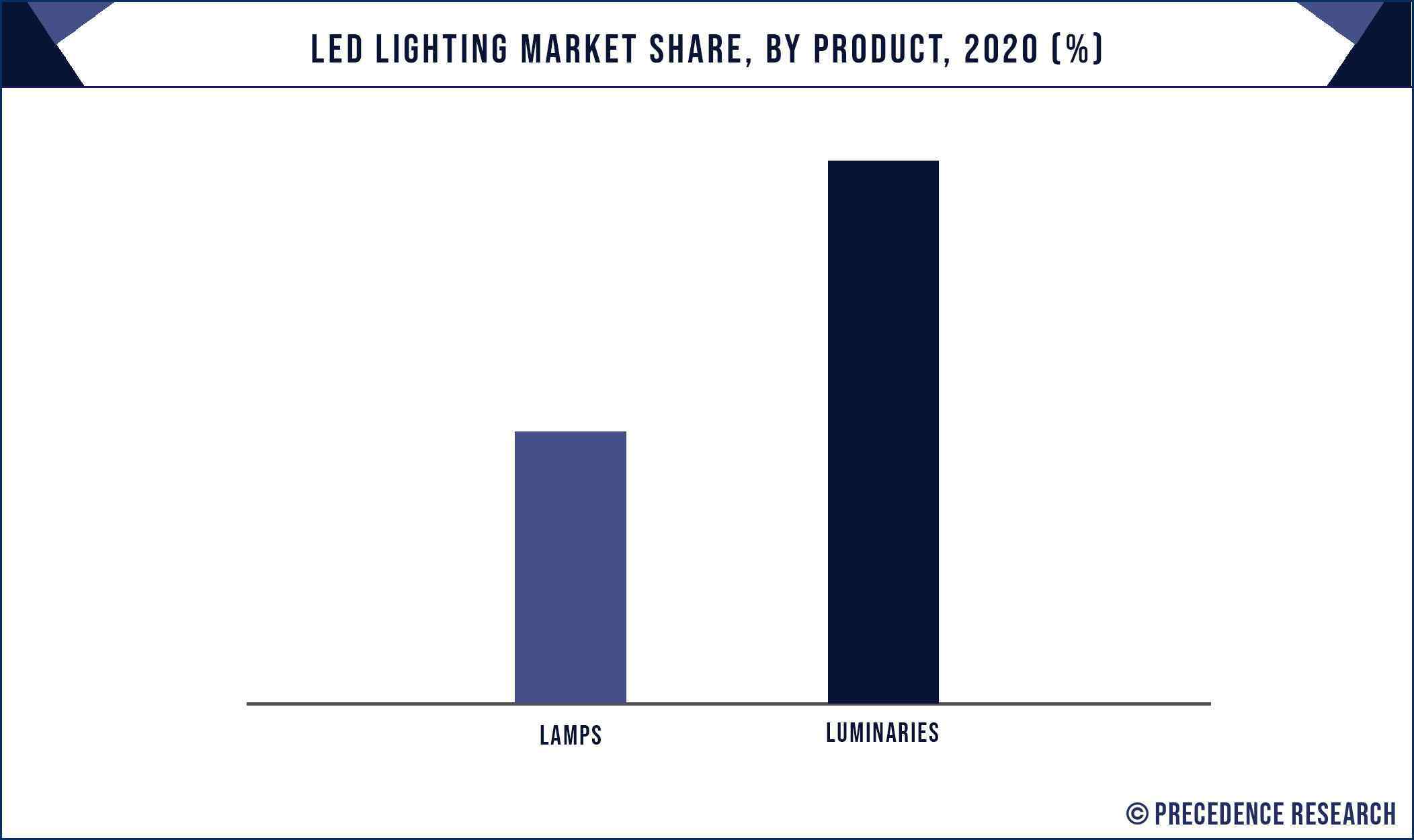 On the other hand, LED lamps exhibit the fastest growth of approximately 14% over the forecast period. LED lamps offer numerous benefits over the incandescent lamps such as energy efficiency, robustness, and right temporal stability. In various countries prices of LED expected to witness a steep decline in the near future that further boosts the demand of LED lamps.

By end-use, the commercial segment dominated the global LED lighting market and accounted for more than 52% of market value share. Increasing demand for LED troffers and downlights significantly drives the growth of the segment. Commercial lighting mainly includes museums, galleries, and other exhibition lighting applications that predominantly use projectors, reflectors, and downlights. On the other side, residential segment is expected to witness the fastest growth during the forthcoming years. The growth of the segment is attributed to the rising adoption of LED A-type lamps due to their low price and various subsidy programs initiated by the agencies and governments of different regions. Price contributes as a decisive factor to drive the growth of the residential segment. Furthermore, consumer penetration towards smart home devices that also includes smart lighting accounted as the other prominent factor to propel the residential segment revenue over the predicted period.

In 2020, the Asia Pacific captured major market value share of more than 43% in the global LED lighting market and projected to continue its dominance during the analysis period. This is mainly attributed to the large consumer base in the region. Most of the developing nations in the region have adopted stringent regulations and attractive offers for the public to escalate the adoption of LED lights in the region. LED lights are helpful in saving energy as they supply more watts per hour in less energy consumption. In addition, rise in the construction sector also positively influences the market growth. There are numerous developing countries present in the region that offer alluring opportunity for the development of medical, education, and infrastructure, thereby promoting the construction of hospitals, schools, buildings, and roads in the region.

On the other hand, North America and Europe are the other prime contributors towards the global LED lighting market growth. Technology advancement and significant initiatives taken by the governments of these regions for reducing the energy consumption are some of the major factors responsible for the growth of the regions.

The global LED lighting market is highly concentrated and competitive due to the majority of market value share occupied by the top five LED light manufacturers that include Cree, Inc.; Signify Holding; Digital Lumens Inc.; Osram GmbH; and Acuity Brands. Product enhancement and development are the major strategies adopted by these major market players to retain their market position and efficiently cater the changing demand of consumers.

Some of the prominent players in the LED lighting market include:

This research study encompasses comprehensive assessment of the marketplace revenue with the help of prevalent quantitative and qualitative intelligences, and prognoses of the market. This report presents breakdown of market into major and niche segments. Furthermore, this research study gauges market revenue growth and its drift at global, regional, and country from 2016 to 2027. This report comprises market division and its revenue valuation by categorizing it depending on product, application, end-use, and region: