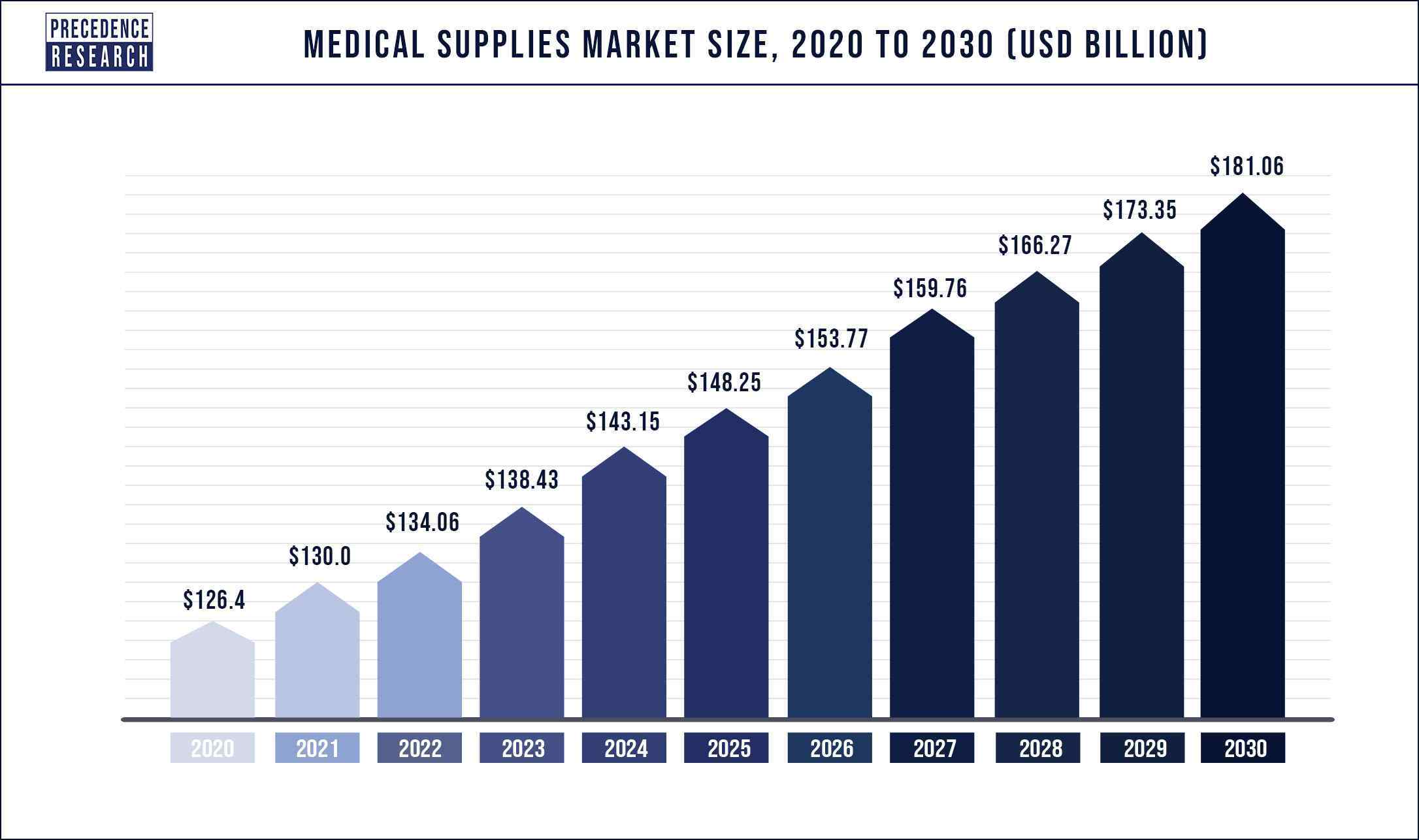 The rapid urbanization had resulted in a drastic change in the lifestyle of the people. The unhealthy food habits, lack of health related activities owing to the busy and hectic schedules, and rising pollution levels has led to increased number of lifestyle diseases and infections, which in turn drives the demand for the medical supplies across the globe. Moreover, the rising awareness regarding the hospital acquired infections among the population is fostering the demand for the medical supplies. According to the World Health Organization, around 15% of the patients are suffering from hospital acquired infections. Furthermore, developing nations like Brazil, Indonesia, China, and India are estimated to have increased demand for the hospital supplies owing to the rising penetration of private hospitals and clinics.

Based on type, the catheters segment dominated the market in 2020, in terms of revenue and is projected to witness notable CAGR during the forecast period. This can be attributed to the growing prevalence of chronic diseases such as diabetes, stroke, dementia, and chronic obstructive pulmonary disease, which are the major cause of urinary incontinence. Urinary incontinence is highly prevalent among the old age population, and hence growing geriatric population across the globe is expected to drive the demand for the catheters in the forthcoming years. According to the WHO, urinary incontinence is prevalent among 9.9% to 36.1% of the population. It is twice higher in older women as compared to that of older men.

On the other hand, the disinfectant segment is estimated to be the most opportunistic segment during the forecast period. The rising prevalence of hospital acquired infections and rising awareness regarding this is expected to drive the growth of this segment. The number of surgeries is rising rapidly and it is a significant factor that is expected to drive the demand for the disinfectants during the forecast period.

Based on application, the others segment accounted largest revenue share in 2020 and is estimated to sustain its dominance during the forecast period. This is attributed to the availability of wider variety of consumables in the others segment. The rising demand for the surgeries, increased number of hospitals and clinics, growing popularity of disposable supplies, and growing focus on the proper waste disposal of the medical supplies is fostering the growth of this segment.

On the other hand, the wound care segment is expected to be the fastest-growing segment during the forecast period. The rising cases of accidents on roads, especially in the developing nations is fueling the demand for the wound care supplies. According to WHO, road accidents is one of the most prominent cause of death among the children and young adults aged between 5 years to 29 years. Around 93% of the road accidents are occurred in the low and middle income countries. Hence, this segment is expected to grow rapidly in the upcoming future.

Based on end user, the hospitals segment dominated the market in 2020, in terms of revenue. The increased popularity and presence of government hospitals attracts a huge customer base, which results in the higher consumption of medical supplies in the hospitals. Moreover, the rising investments by the government and the corporate sector for the development of healthcare sector is expected to foster the market growth. 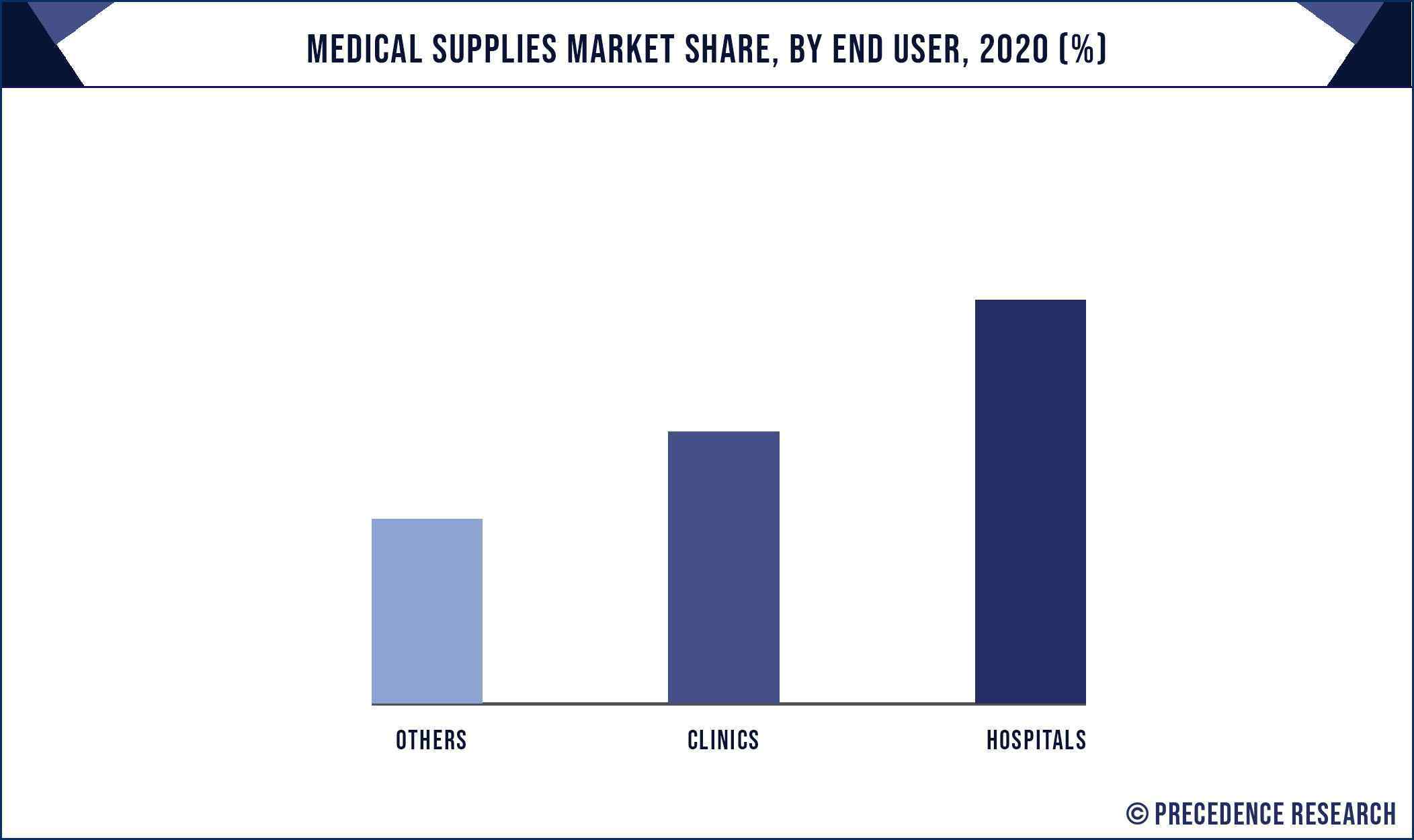 On the other hand, the clinics segment is expected to be the most opportunistic segment during the forecast period. This is attributed to the increasing penetration of the private clinics in the developed and developing nations. Moreover, rising incidences of various diseases and rapidly growing demand for the disinfectants is positively impacting the market.

Based on region, North America dominated the global medical supplies market in 2020, in terms of revenue. North America is characterized by the increasing prevalence of chronic diseases, rising geriatric population, increased healthcare expenditure, developed healthcare infrastructure, and increasing demand for the surgeries among the population. Moreover, the higher adoption of health and medical insurance encourages the population to opt for hospital facilities. All these factors are expected to contribute positively in the growth of the medical supplies market in North America. 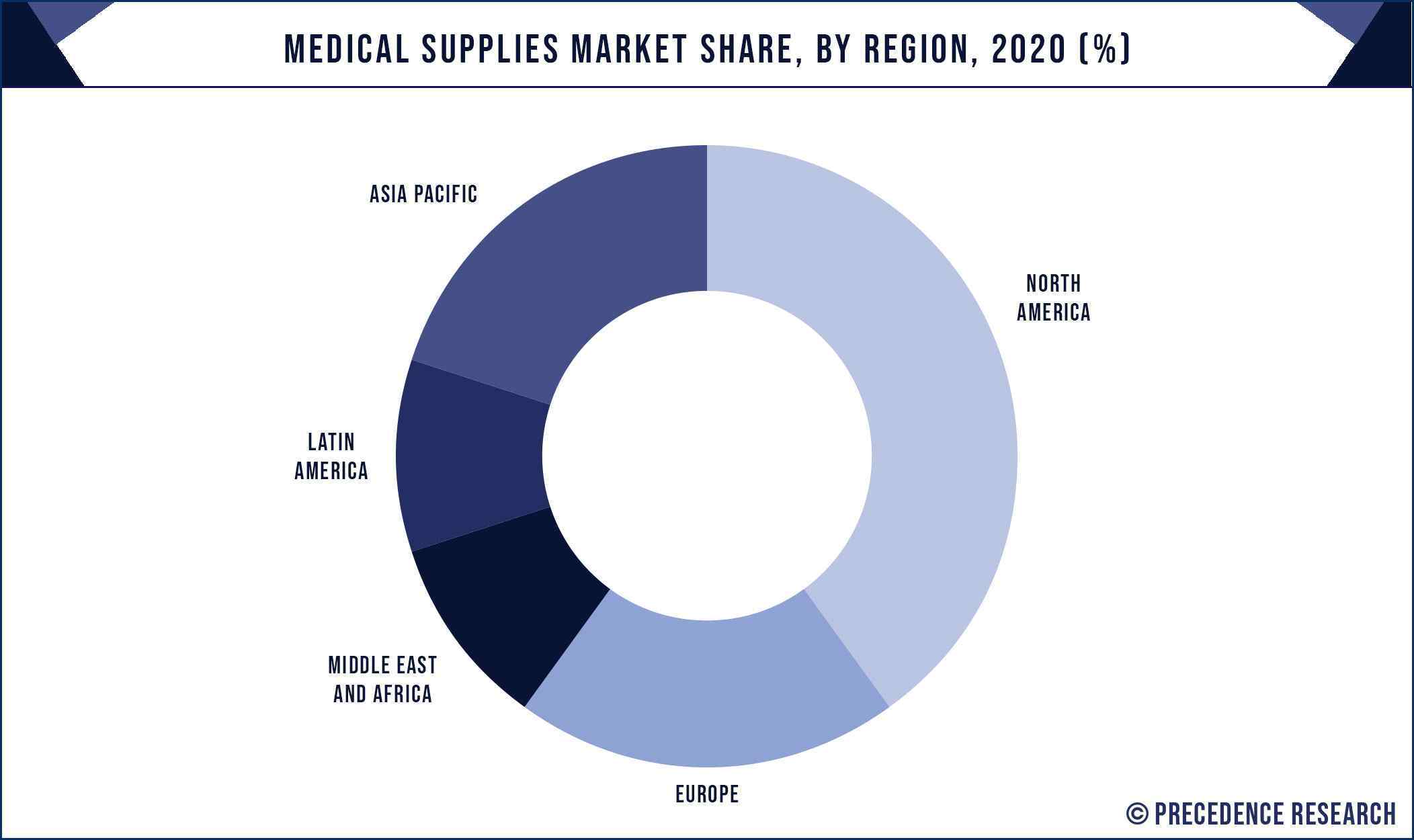 Asia Pacific is expected to be the most opportunistic market during the forecast period. The increased investments by the government and the corporate sector in the development of the healthcare infrastructure. The huge population, rising awareness regarding the non-invasive surgeries, rising healthcare expenditure, and increasing awareness regarding hospital acquired infections are the various factors that can be held accountable for the growth of the medical supplies market during the forecast period.

In October 2019, 3M acquired Acelity, Inc. that specializes in the supply of wound care and surgical medical supplies.

Some of the prominent players in the global medical supplies market include: