Monorail is a type of elevated transportation system that is supported by a single track and is frequently referred to as a beam way. From airport transit to medium-capacity metros, monorail has a wide range of applications. Furthermore, companies now provide mass transit planners. Furthermore, the industry's growth is expected to be hampered by low market penetration, speed, and the availability of alternative options. Furthermore, over the forecast period, traffic congestion, technology advancements, and environmental compatibility are expected to provide profitable prospects for the market. 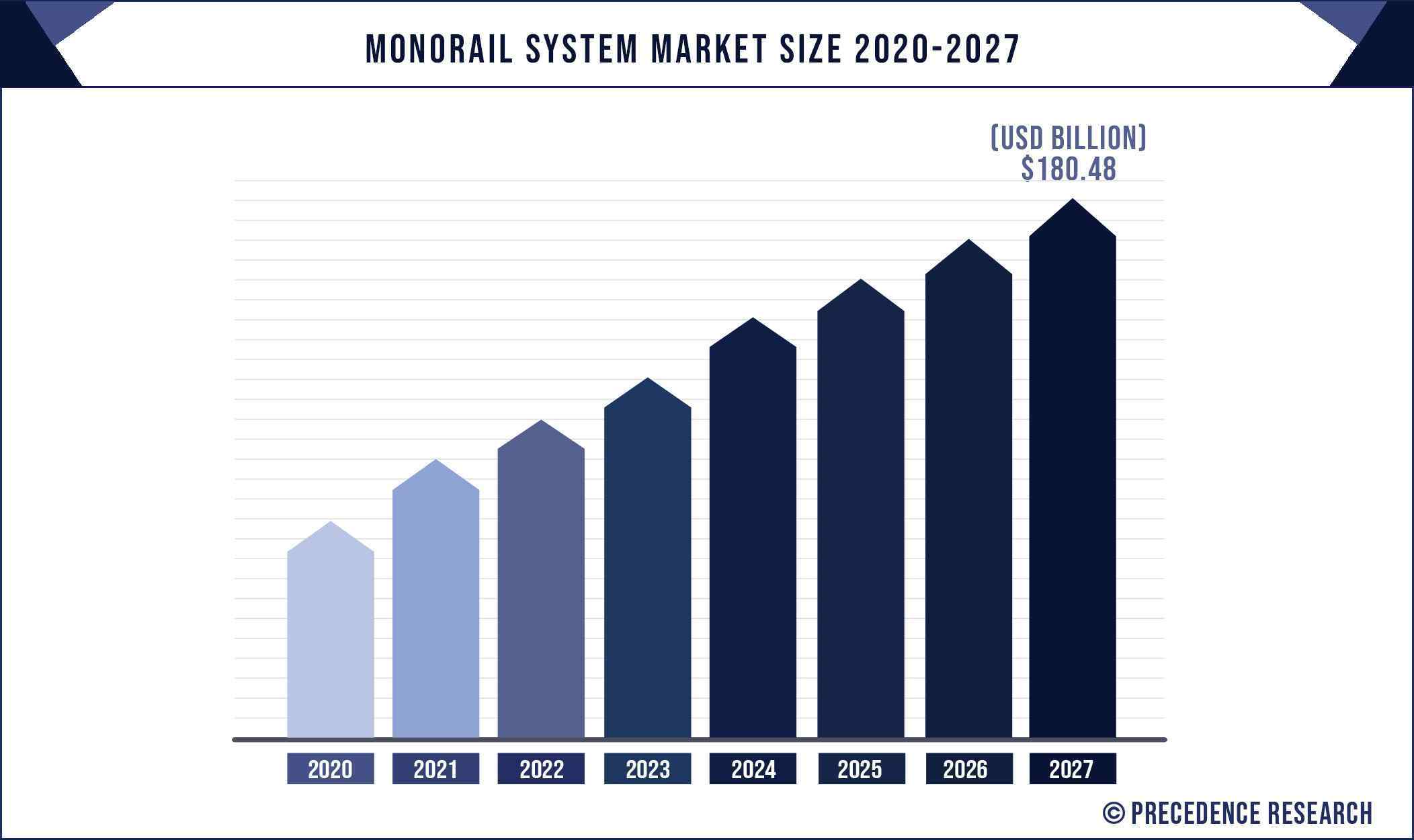 Increasing demand for reliable transport, environmental sustainability, and rising traffic congestion have triggered the demand for clean and voluminous transport system are the major factors driving the monorail systems market. As per American Public Transportation Association (APTA), Americans took 9.9 Bn trips on public transport. In addition, rising infrastructure development along with increasing demand for reliable & environment-friendly public transport system expected to fuel the demand of monorail systems in the coming years. U.S. spends nearly US$ 400 Bn on public infrastructure, besides this the American Society of Civil Engineers (ASCE) stated that the investment on public infrastructure falls short every year and require to invest an additional US$ 2.1 Tn between 2016 and 2025 to meet the rising demand.

However, its low passenger carrying capacity hampers the market growth. Monorails are capable of carrying only four to six cars at a time and sometimes up to eight cars. This is the prime factor that governments of several developing nations prefer rapid transit systems or metros over monorails. Nonetheless, its environment-friendly feature as it runs on electric and magnetic energy may make it a preferred choice for the intra-city transport system in the coming years.

Individually motorized carriers in electric monorail systems are powered by a track-mounted bus bar. Production areas or supply systems that require accumulation are typical applications. This system allows for a wide range of conveyor speeds, ranging from 8 to 400 fpm, permitting the carrier to fast-track, sneak into a meticulouslocation for automaticworkspaces, converse travel, travel on clear production hubs, travel at extremely high rates, accumulate, and so on. Furthermore, the electric monorail system can be equipped with an on-board computer that allows for decision-making for alternative routes without relying on the selected centralized conveyor system. Thus, the demand for electric monorail systems is driving the growth of the market.

The high installation cost of maglev compared to electric railway systems is one of the major constraints limiting its progress. In emerging markets, these cars have a low adoption rate. One of the greatest barriers to manufacturers joining the market, especially in developing and developed countries, is the increased installation costs.

The straddle monorail is a mechanism that allows passenger vehicles to use the track's wheels to travel. Apart from the walking wheels, the bogie has stabilizing and guiding wheels on both sides that clamp to the track's edges to ensure safe and smooth operation.As a result, the monorail system market is expected to grow in near future.

Monorails are normally employed to support manufacturing undertakings. Straddle design of monorail system utilizes extremely effectual guideway design. The guideway's narrow beam is fashioned offsite in a way that route corridor can stay highly reachable to the general public during production. The accomplished guideway is considerably thinner and permits more light through compared to widespread bridge structures requisite by other transit vehicle designs, whereas employing suggestively fewer construction material. As a result, it has significantly lower construction costs. 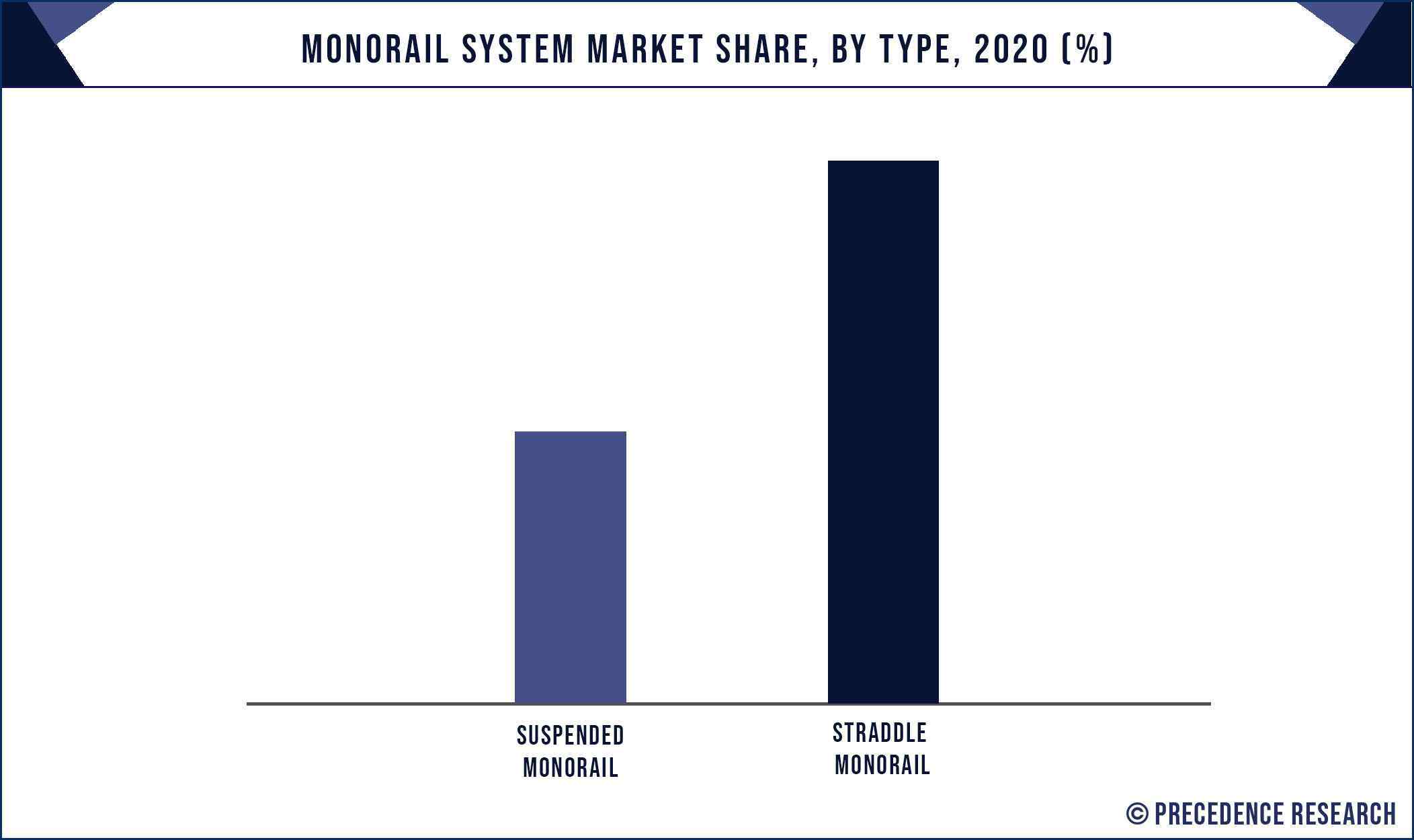 The grade of automation is decided on the basis of number of automated components in the train. Based on automation the global monorail system market is classified into GoA0, GoA1, GoA2, GoA3, and GoA4. GoA3 and GoA4 grade are considered as fully automated mass transport system and they possess highly level of punctuality and safety. They are mostly preferred in mass transits. However, GoA2 monorails are more preferred across the globe as they are more effective in reducing accidents along with enhances the overall train performance. GoA2 trains are incorporated with Automatic Train Protection (ATP) and Automatic Train Operation (ATO) systems, and operated under surveillance. These are some of the important factors that drive the growth of the electric monorail systems market.

Asia-Pacific region is the fastest growing region in the monorail system market. Most of the under-construction projects are based in India, China, and ASEAN countries. In March 2019, India completed its first monorail project in Mumbai with an estimated investment of USD 5019 Mn on the project. In addition, rapid urbanization, rising traffic congestion, along with ever increasing population expected to propel the market growth in the region significantly.

Governments are preferring monorail systems due to rapid urbanization, an increase in the number of daily commuters, increased road traffic congestion, and the availability of tiny places. As a result of the enormous number of projected monorail system projects in Asia Pacific, the region is likely to provide profitable possibilities for monorail system manufacturers. 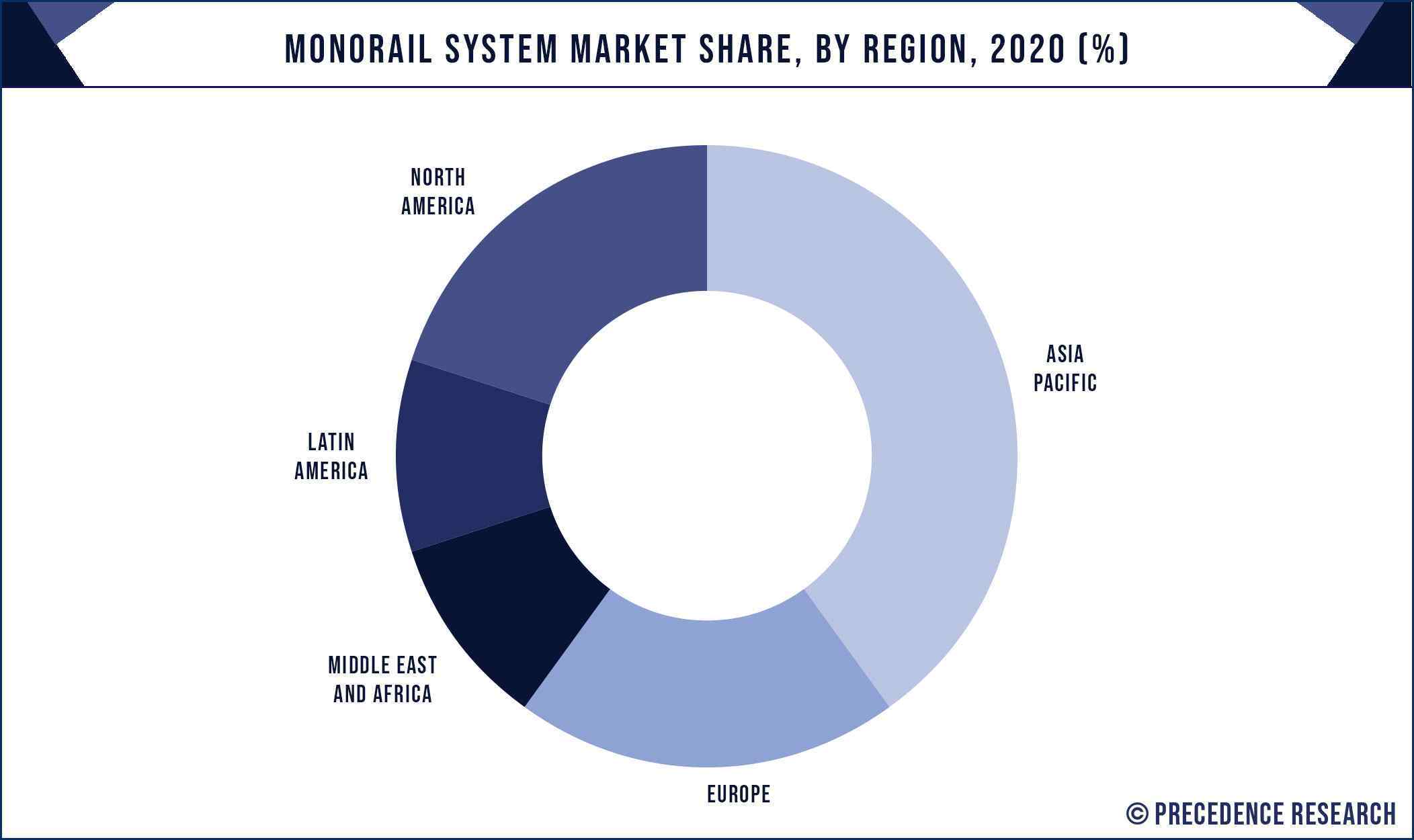 Rest of the world is another most opportunistic region that offers significant revenue growth in the coming years. The factors attributed to the market growth are increased per capita income, enhanced education quality, and rising number of daily commuters are fueling the demand of monorail systems in the region.

The global monorail system market is consolidated with significant technological advancement. Market players are largely focused on advancement in automation of monorail. Moreover, rising number of projects expected to flourish the market growth. For instance, in May 2019, Bombardier Transportation, one of the leading players in monorail systems market, signed an agreement with the Egyptian government to build monorail in Cairo. The company is working in partnership with two other Egyptian firms that are the Arab Contractors and Orascom Construction.

Some of the prominent players in the monorail system market include:

This research report analyzes and predicts growth of market size at global, regional, and country levels. It also offers comprehensive study of the up-to-date industry developments in all of the sub-segments from 2016 to 2027. In order to study thoroughly this research study classified global monorail system market depending upon different parameters such as propulsion type, autonomy, automation, and region: