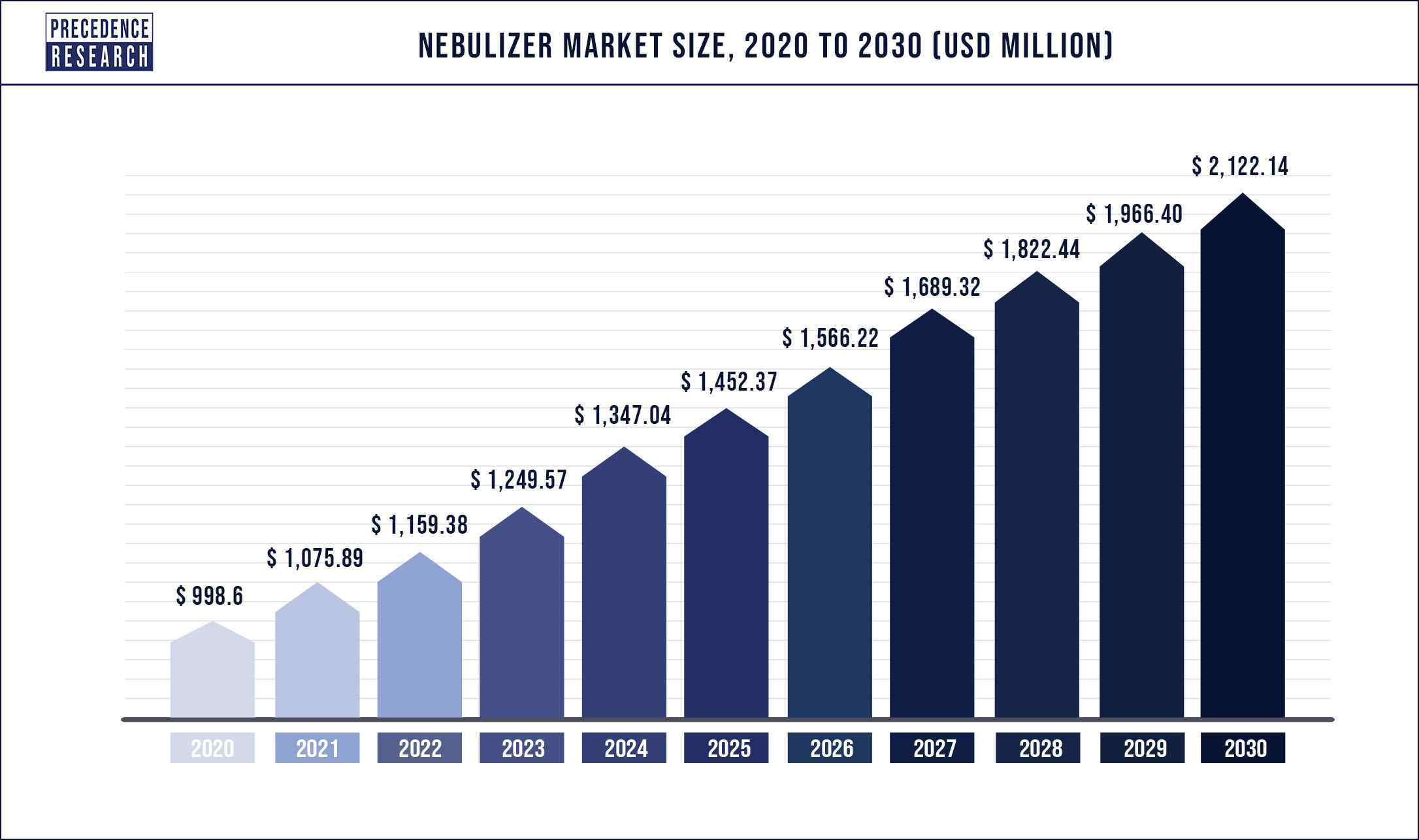 Nebulizer facilitates the delivery of drugs in the form of mist into the lungs. The rising prevalence of respiratory diseases such as chronic obstructive pulmonary disease, asthma, and cystic fibrosis is a major factor that boosts the demand for the nebulizers across the globe. The growing investments and advancements in the drug delivery devices has fostered the growth of the global nebulizer market. The rising geriatric population and rising incidences of various respiratory diseases is augmenting the demand for the nebulizers. According to the World Health Organization, around 65 million people across the globe suffers from COPD and around 3 million dies due to it every year. Moreover, around 262 million people across the globe were affected with asthma in 2019, and it caused 461,000 deaths in the same year. The increasing pollution levels, changing lifestyle, increasing prevalence of smoking, and rapid industrialization are the major factors that contribute towards the growth in the respiratory problems. As per the World Health Organization, around 90% of the people breathe pollutant air and around 7 million people die every year due to indoor and outdoor pollution. These factors are indirectly boosting the growth of the global nebulizer market.

The surging awareness pertaining to the respiratory diseases and the easy availability of nebulizers is driving the market growth across the globe. The surging penetration of retail pharmacy and e-pharmacy across the global markets is expected to spur the growth in the sales of the nebulizers. Furthermore, the rising investments by the top market players in the research and development of various new nebulizers with innovative features are expected to drive the sale of the nebulizers. For instance, in 2018, Philips launched InnoSpire Go, small-sized, portable, and light-weight mesh nebulizer that administers the drugs in just few minutes. The presence of several top players and new product launches by them is propelling the market growth. Moreover, the authorities like FDA and EMA are playing a crucial role in approvals of the new product launches by the market players. The active participation of these authorities in the approvals and overlooking into the matters of clinical trials is playing a significant role in the growth of the global nebulizer market.

Scope of the Nebulizer Market

Based on the type, the jet segment dominated the global nebulizer market. This segment accounted for a market share of around 65% in 2020. This is attributed to the increased demand for the jet nebulizers owing to its low cost availability. The nebulizers based on the jet technology had been traditionally used for the administration of aerosolized medications. The increasing demand for the jet nebulizers in the low and middle income countries has fostered the growth of this segment.

On the other hand, the mesh is estimated to be the most opportunistic segment during the forecast period. The new technology and advancements used in the mesh nebulizers is spurring its demand among the patients across the globe. The introduction of advanced technologies in these nebulizers is augmenting its growth in the developed nations and hence, it is expected to grow at highest CAGR.

The hospital & clinic segment accounted for the largest revenue share and dominated the global nebulizer market in 2020. The increased penetration of hospitals and the availability of various types of nebulizers in hospitals and clinics have resulted in the dominance of this segment. Hospitals and clinics are the primary preference of the patients for receiving the treatment for respiratory diseases. The rising investments in equipping the healthcare units with latest and advanced technologies and devices are presenting promising growth opportunities for the market players.

The home healthcare is expected to be the fastest-growing segment during the forecast period. The technological advancements in the drug delivery devices have encouraged the miniaturization of nebulizers that makes them suitable for use in a home healthcare setting. The growing geriatric population, rising need for reducing healthcare costs, and growing prevalence of pulmonary diseases are the major factors that drives the growth of the home healthcare segment. Further, the growing popularity of online pharmacies and the easy availability and home delivery are the major factors that drive the growth of this segment.

North America dominated the global nebulizer market, garnering a market share of around 35% of the market share in 2020. North America is characterized by the increased prevalence of respiratory diseases. The changing lifestyle, increased prevalence of smoking, rising consumption of tobacco, and rising geriatric population. According to the American Lung Association, around 16.4 million people in US were diagnosed with some type of COPD such as emphysema, chronic bronchitis, and COPD. As per the Asthma and Allergy Foundation of America, around 25 million people were suffering from asthma in 2018 in US. These factors have driven the growth of the North America nebulizer market. The increased healthcare expenditure in US has also contributed towards the market growth. The per capita healthcare expenditure in US is significant, which amounted to US$ 10,624 in 2018.

On the other hand, Asia Pacific is estimated to be the most opportunistic market during the forecast period. Asia Pacific is witnessing rapid industrialization, rapid urbanization, rising prevalence of smoking, changing lifestyle, and growing geriatric population are the major factors that are expected to drive the growth of the nebulizer market. According to the World Health Organization, around 80% of the global geriatric population is expected to live in low and middle income countries by 2050. The geriatric people spends more in the healthcare and thus are expected to drive the market growth. According to the WHO, around 80% of the death due to COPD occurs in the low and middle income countries. Therefore, the demand for the nebulizers is expected to grow rapidly in Asia Pacific.

The key market players in the global nebulizer market are constantly engaged in various developmental strategies such as product launches, collaborations, and partnerships in order to establish their supremacy in the market and gain competitive edge over others. These developmental strategies are expected to provide new growth prospects in the forthcoming future and will foster the growth of the global nebulizer market.

Some of the prominent players in the global nebulizer market include: