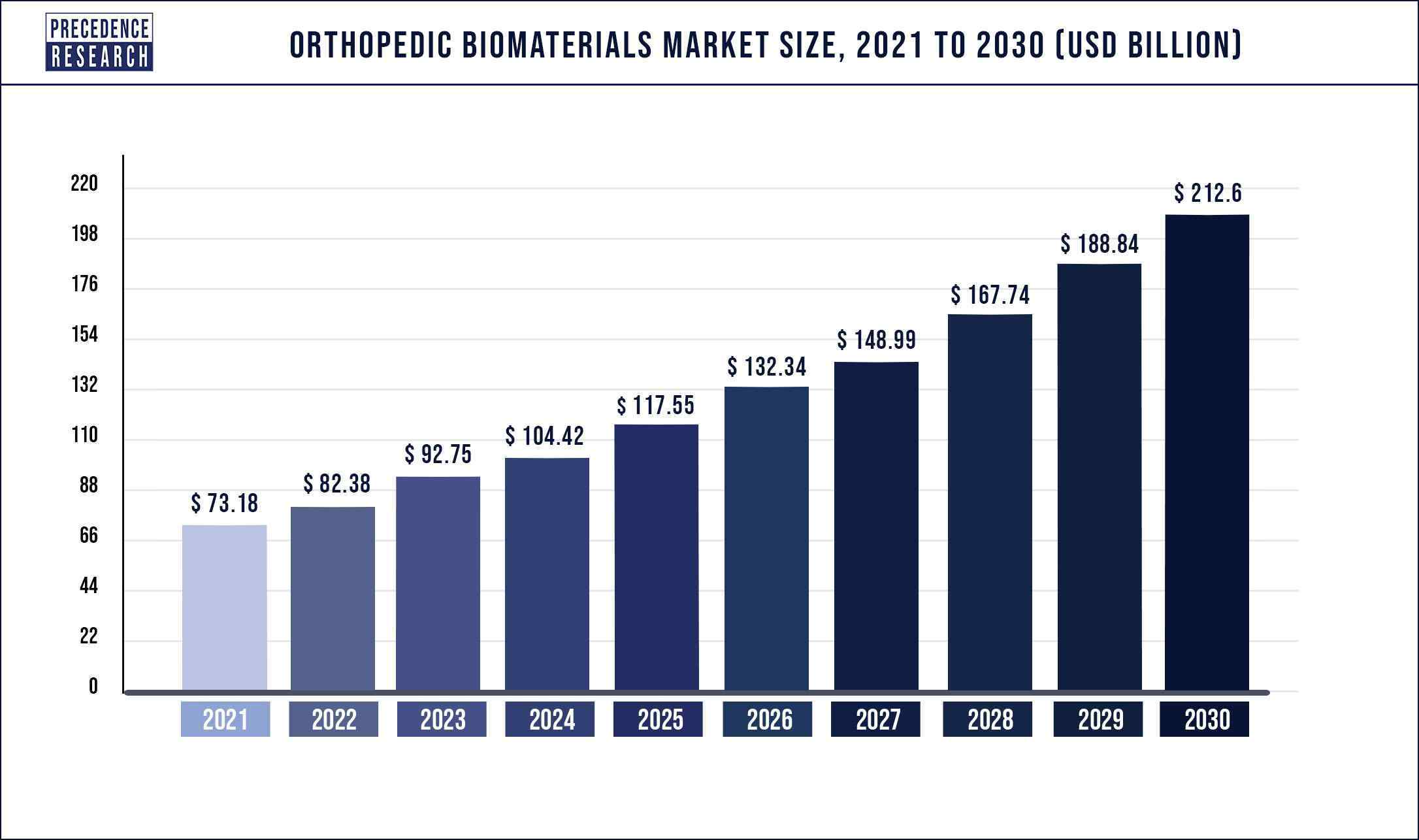 According to Census Bureau of United States the geriatric population (people above 65 age) has grown around 1.6 million from year 2014 to 2015. Rapidly increasing trauma incidences caused by fall, sports and accidents are pushing demand for orthopedic biomaterials has been increased. As population engaged in leisure operations and sports activities increases, the rate of accident is also expected to increase.

Based on the type of material the market has been classified into ceramics & bioactive glass, calcium phosphate cement, composites, metal and polymers. The ceramics & bioactive glass segment dominated the market in 2018 as ceramics are widely adopted in repair of hard tissues in multiple procedures. Owing to increasing use of polymer in bone cement as well as load bearing area for entire joint arthroplasties, the polymer segment is also projected to witness significant growth over the forecast period.  These polymers are used in wide range of applications such as diagnostic support, drug delivery systems and useful material for tissue engineering.

Various applications of orthopedic biomaterials include joint orthobiologics, oerhopedic implants, joint replacement/ reconstruction, viscosupplementation along with the absorbable tissue fixation. The orthopedic implant segment dominated the market in 2021 and continuous to dominate the market over the forecast period. According to the American Society of Plastic Surgeons, biomaterials are widely used for plastic surgeries and the increasing demand for plastic surgeries across the globe is further escalate the biomaterials market.

Geographically, the global orthopedic biomaterials market is segmented into North America, Europe, Asia Pacific, and Middle East & Africa. North America is estimated to top the global market throughout the estimated time period. The growth in North America has been attributed to the increasing prevalence of various orthopedic surgeries. Growing number of patients requiring knee reconstruction or replacement and other orthopedic procedures are likely to enhance the growth of the market in the region. Europe holds the second largest position in the global orthopedic biomaterials market owing to rising research activities and availability of innovative treatments.

Asia Pacific is projected to witness fastest growth rate in the global orthopedic biomaterials market over the forecast period. This growth is owing to increased bone degenerative and disorders in developing nations such as India and China. India and China show robust growth on account of increasing population and subsequent rise in patient population. Growing expenditure on the healthcare and health infrastructure will further propel the growth of the orthopedic biomaterials market in the region. However, lack of knowledge, limited access to medical treatments results in less development in the Middle East and Africa. Nonetheless, gradual upsurge in spending for development of health care centers UAE (United Arab Emirates) may contribute to the growth in the Middle East during years to come. 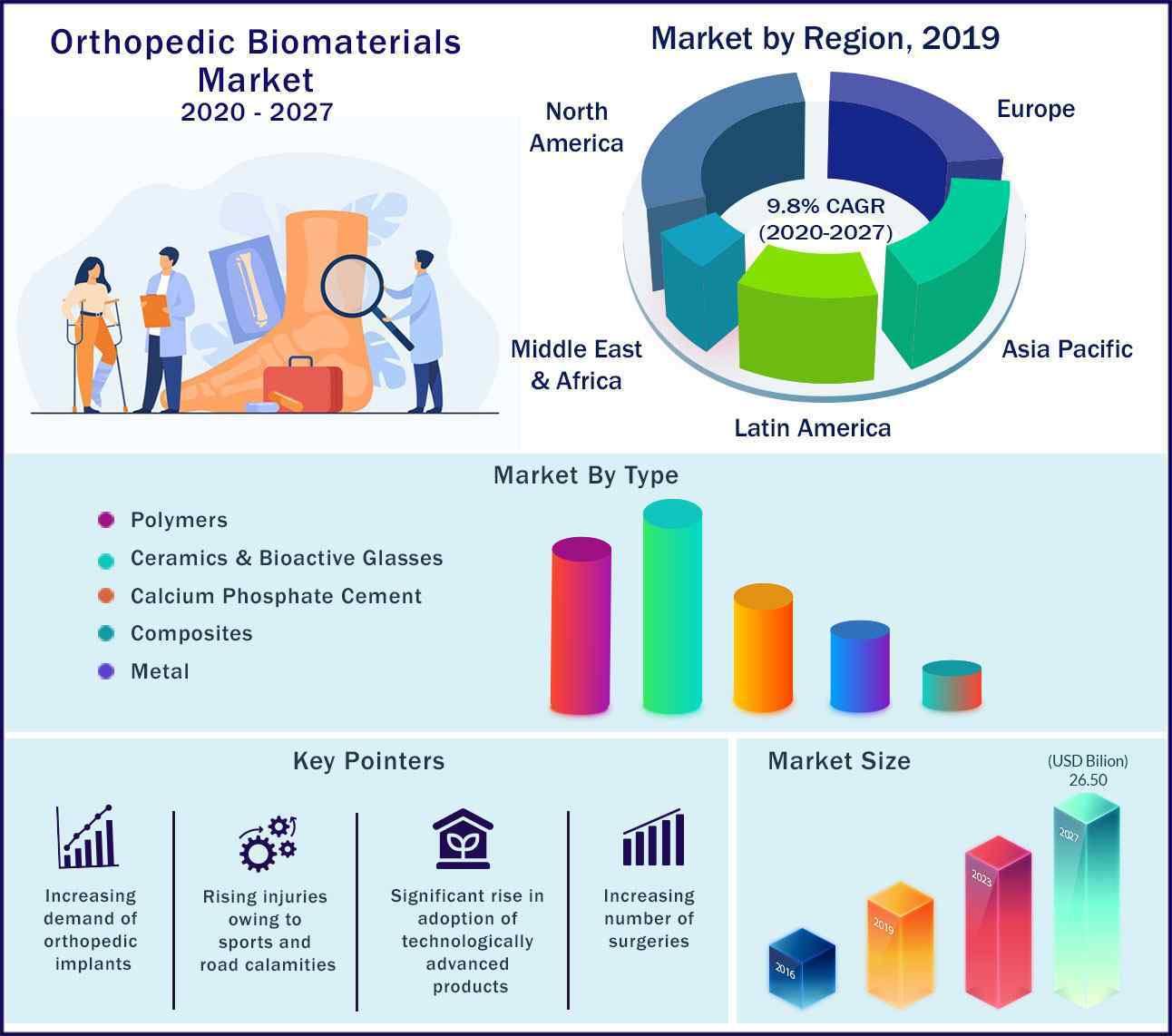 The orthopedic biomaterials market fragmented in nature and various local and regional players are continuously focusing on development of technologically advanced products in order to gain the competitive edge in the market. The companies are emphasizing on R&D and adopting collaborative strategic approach to increase their competitiveness in the market.

The major key players in the orthopedic biomaterials market include:

This research report incorporates complete review of the market with the help of broad qualitative and quantitative understandings, and projections regarding the market. This report presents breakdown of marketplace into potential and niche sectors. Further, this research study analyzes market revenue and its growth trend at global, regional, and country from 2017 to 2030. This report includes market segmentation and its revenue estimation by classifying it based on end-use and region as follows: