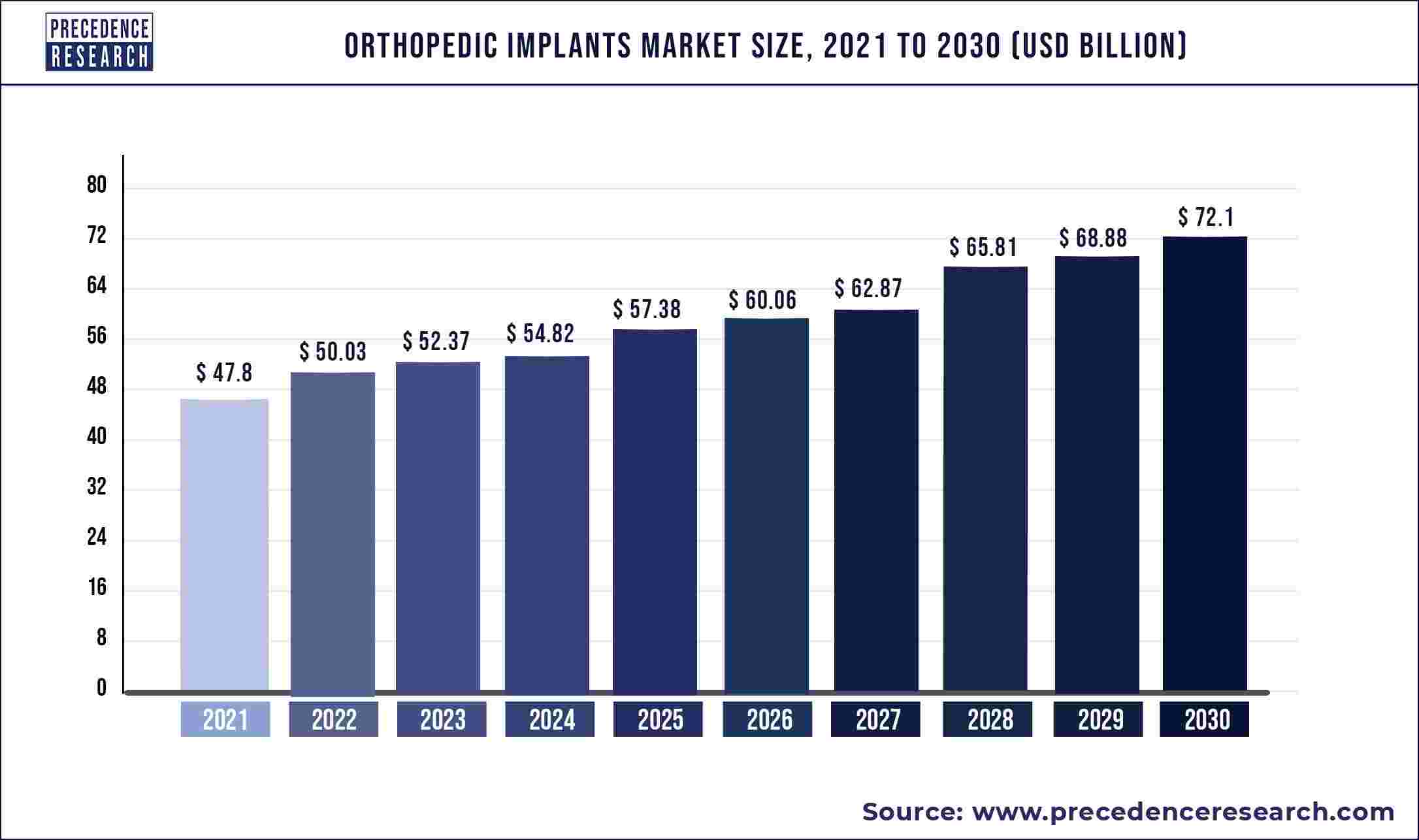 It is a medical equipment which is made use of when there is a missing part of the bone or a particular joint in order to support the damage is done to that particular bone with a view to prevent further damage. This artificial implant is manufactured with the help of stainless steel and alloys like titanium to obtain maximum strength and is quoted with the help of plastic which behaves as the cartilage for that particular part of the body in order to maintain the structure and functionality of the joint. The surgeries which would require minimal operative procedures mainly make use of these kind of artificial implants which are usually seen in the treatment of spinal injuries and other such related diseases like the stenosis of the lumbar spine.

Rapid surge in the number of orthopedic injuries have been noted recent years as a result of the various crawling diseases that have showing up relating to the bones. As a result of the huge geriatric population residing worldwide the number of bone injuries and fractures has seen a rise during the recent years. As the age advances the calcium level of the bones deteriorates which makes it porous and is termed as osteoporosis. Osteoporosis and osteoarthritis have become one of the most common diseases existing in the elderly population during the recent times. The prevalence of other types of local injuries due to fall among the elderly people also proved to be a driving factor for the growth of the market.

Additionally, the technological advancements and innovations like the robot assisted operative equipments, the rapid use of orthopedic implants and the acceptance of medical devices which are used for implementation and the various other modern techniques to deal with musculoskeletal injuries have helped to boost the market during the forecast. The cost which is associated with the use of these advanced technologies is very high which becomes unaffordable for the common people. The government policies are very strict regarding the orthopedic implants which make it quite difficult for the market to show a considerable growth during the forecast. On the other hand, the developing economies are offering lucrative opportunities to the market in order to show a considerable growth.

The outbreak of the pandemic had shown a considerable impact on the growth of the market negatively. In order to curtail the spread of infection strict government guidelines and rules were laid down regarding the functioning of the hospitals. The hospitals started opting for elective surgical procedures only which were unavoidable and proved to be an emergency. While the other surgical procedures which did not need emergency surgical intervention were kept on palliative treatment or on hold. This reason greatly hampered the growth of the market. Number of startup industries hard to shut down temporarily which involves a number of sub-domains as well related to the health care industry. There was a considerable decline in the flow of patients which was noticed during the course of the pandemic in order to avoid cross infection between the patient and the medical staff. The demand and supply of orthopedic implants was hampered as a number of clinics and hospitals remained specifically reserved only for the patients affected by the pandemic. These multiple factors hampered the growth of the market and showed a decline in the revenue generation.

A sudden boost was noticed in the compound annual growth rate of the orthopedic implant market after the restrictions were removed in the post pandemic period. The surgeries which were kept on hold and palliative treatment during the occurrence of the pandemic were opted for immediately by the hospitals which led to the high demand of orthopedic implants in the market. As a result of the sedentary lifestyle practices which were followed globally due to the changes in the work pattern of the people during the pandemic led to a number of orthopedic disorders which involved spinal disorders and other bone related disorders as a result of obesity. As per our research which was conducted by the NCBI most of the Americans who were above the age of 50 develop osteoporosis and need surgical intervention in order to deal with the disease.

The rapid increase in the cases of osteoporosis and osteoarthritis is foreseen to boost the demand for the orthopedic implants in the near future. The delays which were made regarding the surgical treatments during the period of the pandemic had hampered the demand in supply chain of the orthopedic implants market. After the removal of the restrictions during the post pandemic this same demand was seen will be on a rise. The recent technological advancements which have been made by the orthopedic implants sector have helped to boost the market tremendously. The increasing demand for joint implants which are customized as per the requirements of the patients is foreseen to boost the market growth considerably. The orthopedic implants are manufactured as per the orders which are placed by the hospital by taking into consideration the anatomical structure of each bone and joint. This helps the patient to have a unique experience and enjoy a comfortable life after the surgical procedure.

Numerous companies are striving hard to supply advanced technologies in order to manufacture customized orthopedic implants. A new technology which is known as 3D printing has also seen a great demand from the present market as a result of its high accuracy and precision regarding the structure and the anatomical setting of a particular joint or bone. Technologies which can supply a cutting-edge variety are being developed by numerous companies in order to boost the demand of orthopedic implants in the market. A constant rise in the cases of obesity and the increasing shift to sedentary pattern of lifestyle helps to boost the market during the forecast period. A huge amount of investment has been observed by the key market players for research and development in order to produce a minimally invasive procedure for the orthopedic surgeries. Constant efforts are also being taken by the key market players in order to develop cost effective orthopedic implants in order to make it affordable for the common man. These multiple factors prove to be a driving force for the growth of the market during the forecast period.

On the basis of product, the market has been distributed under reconstructive joint replacements, dental implants, orthobiologics, spinal implants and trauma. There are numerous other types of implants which come under this category. The reconstructive joint implants segment is foreseen to dominate the market by having the largest share in the forecast period. As a result of the rapid increase in the cases of osteoarthritis and osteoporosis this segment is seen to dominate its position throughout the growth phase of the market.

A rapid research and development which is carried out by the key market players in order to develop the best implants for such cases has helped to boost the market. The increasing need for modern techniques and advanced therapies which include minimal invasive techniques has made the market players eager to develop better implants. With the increasing awareness regarding orthobiologics a steady growth in the market size has been noticed.

On the other hand, the other varieties of biomaterials are seen to generate a higher demand during the forecast period. The advantages of reduced toxicity and biocompatibility have also helped to boost the market for the other types of materials. The capacity to carry a specific type of binding protein helps to hasten the tissue healing process which increases the demand for these materials in the market.

On the basis of type, the market has been divided into hip, wrist, knee, shoulder, spine, dental and ankle implants. Among these, the knee segment has recorded the highest growth during the forecast period and is foreseen to maintain its position in the future as well figured with the increase in prevalence of road traffic accidents the number of bone injuries and joint dislocations has seen a steady rise. The number of bone injuries has also increased due to the increasing prevalence of sports injuries which is seen as a result of the increasing competition among the players. Accident re lifestyle practice which leads to obesity has also become a major factor for a number of bone injuries and joint disorders. These multiple factors have helped to boost the market for the knee segment as it bears the direct load of the body. This has also given rise to multiple spinal disorders which helps the market to grow. The rapid growth in the geriatric population has increased the number of incidences with spinal disorders.

On the basis of geography, the North American market has dominated the segment as a result of it's high prevalence in the patients of osteoarthritis and osteoporosis. The European market has been considered to be the second in line as far as the market share is concerned. The Asia Pacific region has also registered a significant growth as a result of the groin joint replacement surgeries. The increasing sedentary lifestyle of the people has led to numerous born and joined disorders.

In January 2021, GOeasy, which is a leading market player of the orthopedics implants industry which manufactures instruments and implants for joint replacement procedures has disclosed its deal with PeekMed, which is a leading software technology industry that is developing a digital planning platform which is a powerful 3D preoperative tool.