The growth of portable generator market is driven by increasing concerns over power stability for uninterrupted business operations during natural calamities. 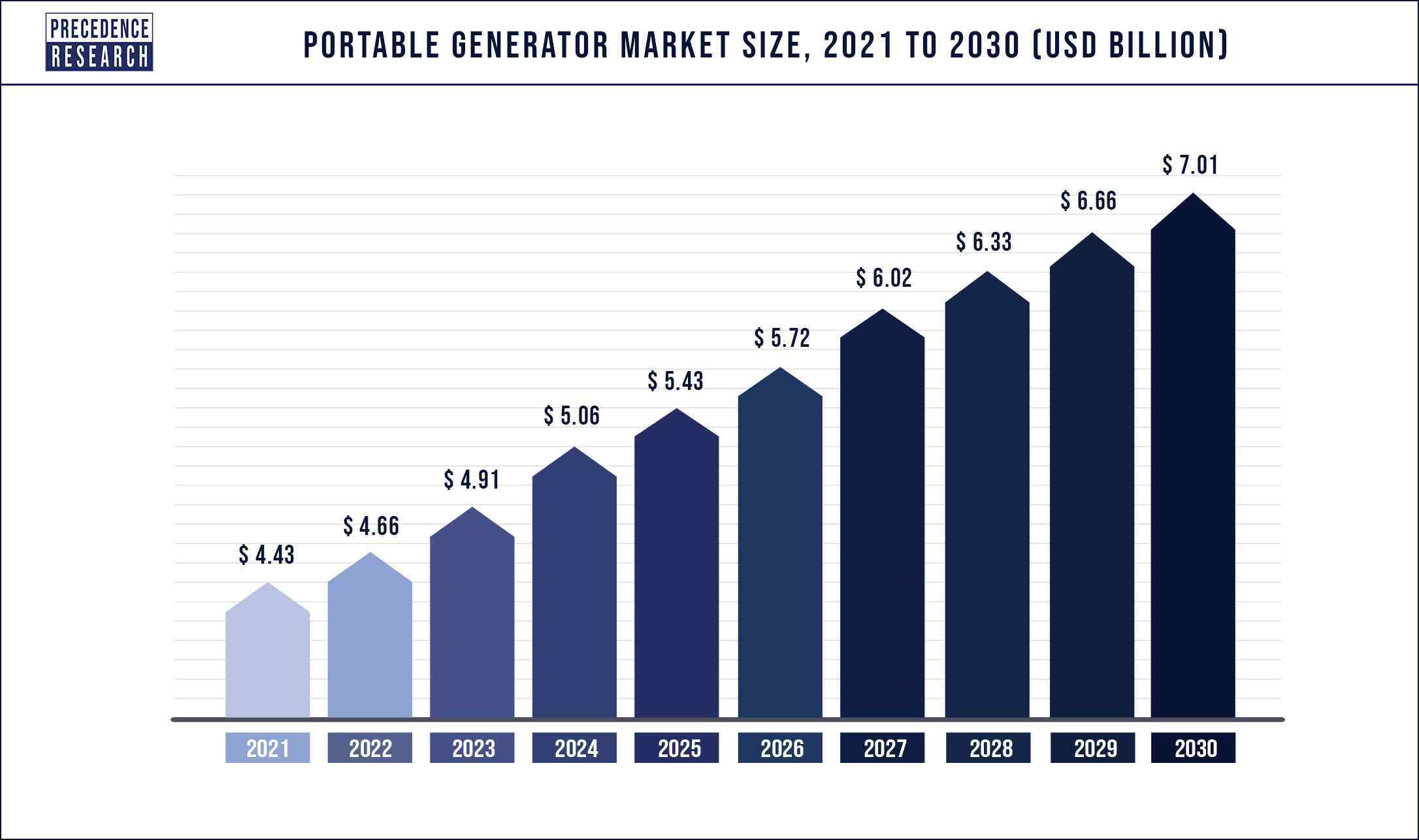 In the present times, a power outage indicates an unexpected termination of connectivity with the rest of the globe. Present fast-paced world which is firmly networked over a virtual space, an interruption in connectivity sternly deterrents smooth operability of commerce. This leads to interferences in accomplishment of mission critical tasks, irreparable harm to an establishment’s repute, loss of faith amongst customers, and ultimately, forfeit of revenues. Snowballing implementation of portable generators owed to a speedily rising construction sector is also pushing market growth. Power tools of different sizes including drives, drills, air hammers, and compressors are widely employed in the construction industry. Portable generators are employed widely for novel construction projects, where most of the activity is conducted at night and in circumstances where power from power grids is not reachable.

Further, the untimely outburst of COVID-19 has caused in ceased industry maneuvers across the world. Rising digital revolution due to technological advancement in IT sector shadowed by virus outstretched has occasioned in unexpected upsurge in industry automation. Consequently, intensifying urgency to address to the heightened electricity demand mainly from commercial and residential sector is set to augment the portable generators industry prospect.

Three-phase portable generators market is projected to offer significant growth during years to come. Influences such as prerequisite for nominal wiring plus easier machinery & lower weight in comparison with their accessible counterparts would augment the complete market scenario. Furthermore, effectual power supply, system flexibility, and finest material requirement are some of the protuberant features supplementing the product acceptance.

The residential segment is anticipated to be the principal market for portable generators throughout the prediction period. It accounted considerable power demand worldwide due to urbanization, population growth, and numerous other factors.The industrial and commercial sectors of developing economies, residential area of established economies, and the snowballing requirement for power in defense operations are predictable to offer noteworthy prospects for market contributors in the impending years.

Asia Pacific signifies profitable growth opportunities for portable generators sector. Asia Pacific is the home to 2 of the rapidly advancing nations such as India and China. As per, Energy Information Administration (EIA), nearby 70% of the upsurge in residential energy consumption arises from Asia-Pacific. This consumption is led by China and India on account of improving standards of living and high demand for energy-using appliances, lighting and equipment. Further, construction sector is on the escalation in India and China owed to present government initiatives including smart cities and green building campaigns. This in turn predicted to support the demand for portable generators across this region.

India is predictable to perceive the fastest relative development in per person residential energy usage due to augmented access to energy sources, thus collective number of power outages in the residential area are likely to upsurge the need for portable generators during years to come.Further, considerable market growth is accredited to the huge demand for portable generators in nations such as the Mexico, U.S., and Puerto Rico.

Additionally, rising number of weather-associated power outages and the cumulative demand for reliable and uninterrupted power supply in developing and developed nations are predicted to boost the global portable generator sector during the estimate period. Cumulative consciousness of global warming has occurred in the rising need for portable generators based a sustainable energy source such as biofuel. It has chemical characteristics analogous to that of petroleum-based fuels and henceforth, it can be used as a direct alternative for diesel fuel. 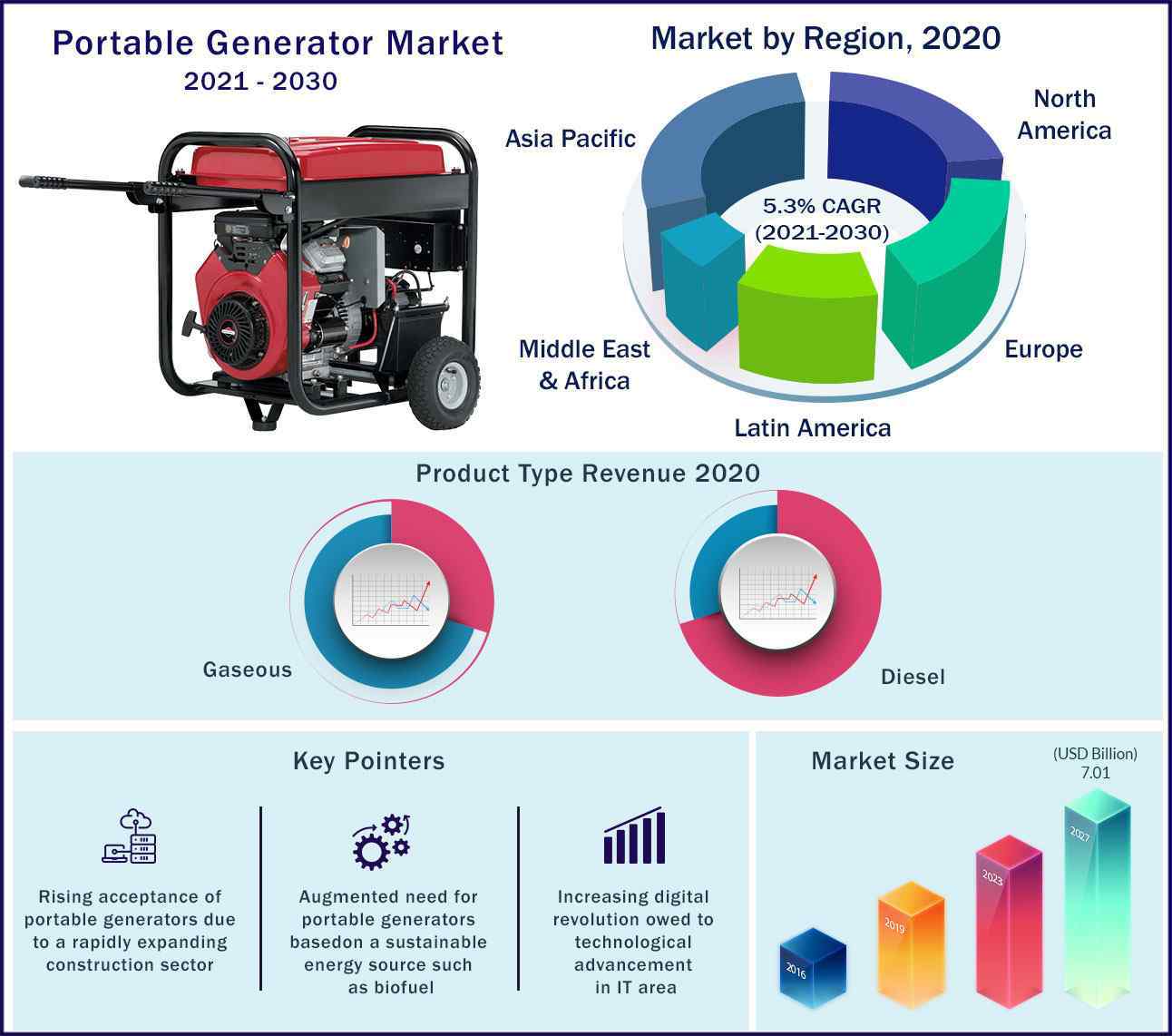 Companies with sophisticated technical capabilities are likely to subsidize suggestively toward technological advancements. Small and medium enterprises are grabbing noteworthy ground in developing nations due their constant growth in energy demand. This has brightened the prospects for several players involved in these economies. These SMEs are primarily engaged in manufacturing where the demand for uninterrupted power supply is high. Leading competitors contending in global Portable generator market are as follows:

Recent developments of leading players are as follows:

By Based on Fuel