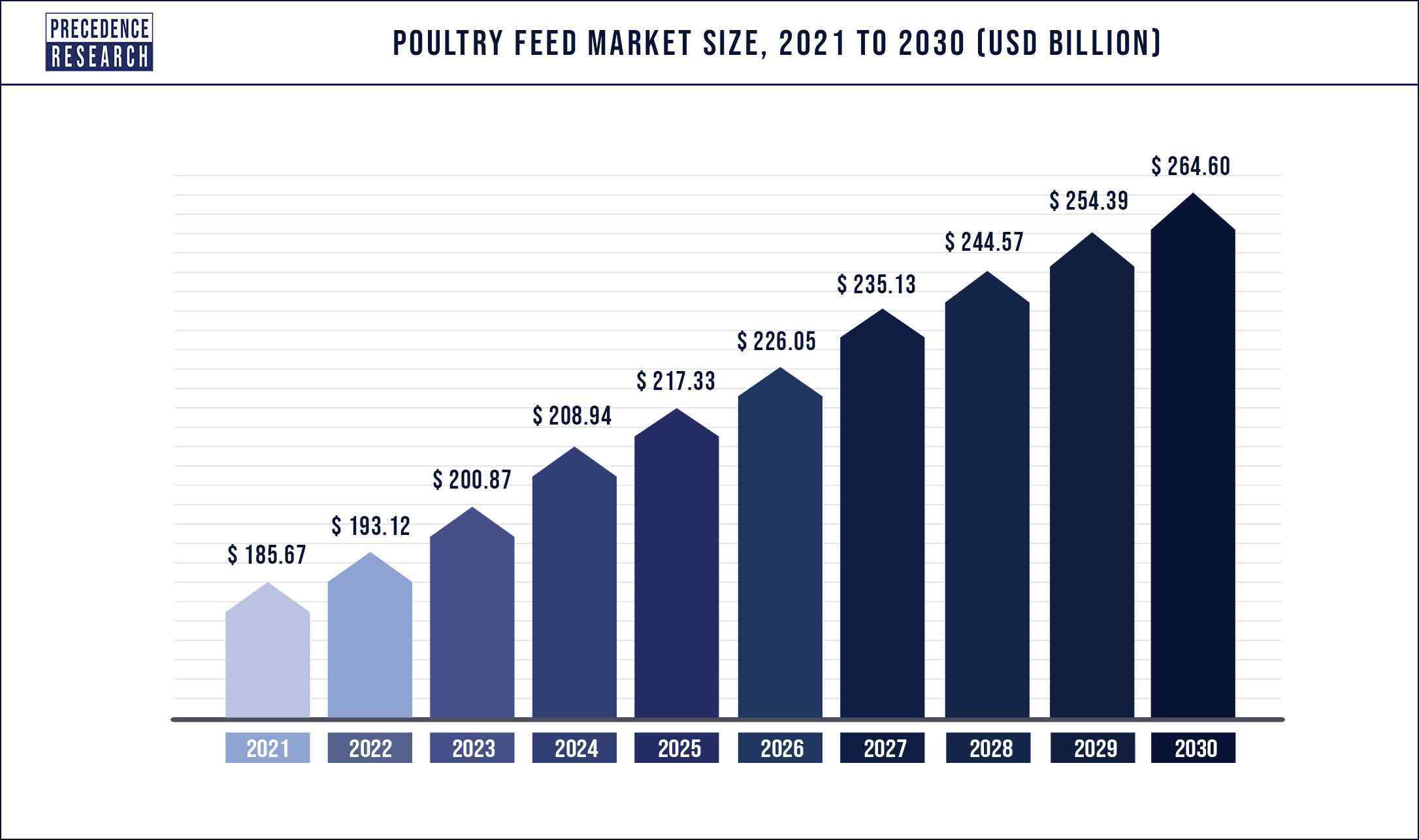 The factors such as the surge in demand for organic feed and growing production of livestock production are driving the growth of global poultry feed market. As per the Organization for Economic Co-operation and Development, poultry requires 13% fat, 60% protein, and 3% calcium. Therefore, poultry by products and fish food are used to meet the nutrient requirements. The by-product accounts for about 50% and the live market weight of ruminants and 30% of the live market weight of poultry. These by products are processed, pulverized, and used as chicken feed. Poultry meat is becoming more popular around the world, with consumption rising from 45,033 metric tons in 2018 to 45,938 metric tons in 2020.

Poultry chicken is regarded as one of the most cost-effective sources of protein and as a result, the demand for poultry goods such as eggs and meat is continually increasing. As per the United States Department of Agriculture, worldwide chicken meat production will likely to exceed 97.8 million tons in 2019, up 2% from 2018. The market for poultry feed is also growing due to favorable government regulations. By 2019, the integration of insect protein in poultry feed will have high requirement for poultry feed, thus projecting the growth of global poultry feed market. In February 2018, the European Commission’s Health and Food Safety Commissioner allowed the incorporation of insect protein in poultry feed.

The product releases, acquisitions, business expansions, joint ventures, and considerable investments in research and development are all strategies used by poultry feed makers to obtain optimal business expansion and building a positive market position. The evolving global businesses or new competitors are expected to have more chance to expand the poultry feed market, particularly in emerging nations. During the projected period, the growing government activities and growing foreign investments in the emerging agricultural sector, particularly in India and China of Asia-Pacific region, are likely to promote the growth of global poultry feed market.

Due to growing number of diseases and infections, the animals are more vulnerable to the such ailments. Thus, this factor is driving demand for poultry feed in the global market. The factors such as raw material price volatility as well as environmental concerns are expected to stymie the global poultry feed market’s expansion throughout the projection period.

The broilers segment dominated the poultry feed market in 2021 with revenue share of 70%. The broilers are chickens or birds raised purely for the purpose of producing meat. They have genes that allow them to grow more quickly than native chickens and layers. Broilers can gain a lot of weight in a short amount of time, which might cause their vents to expand or make them paralyzed and unable to walk as a result of their extreme weight increase. Broiler meals are designed to provide extra energy to help them gain weight. 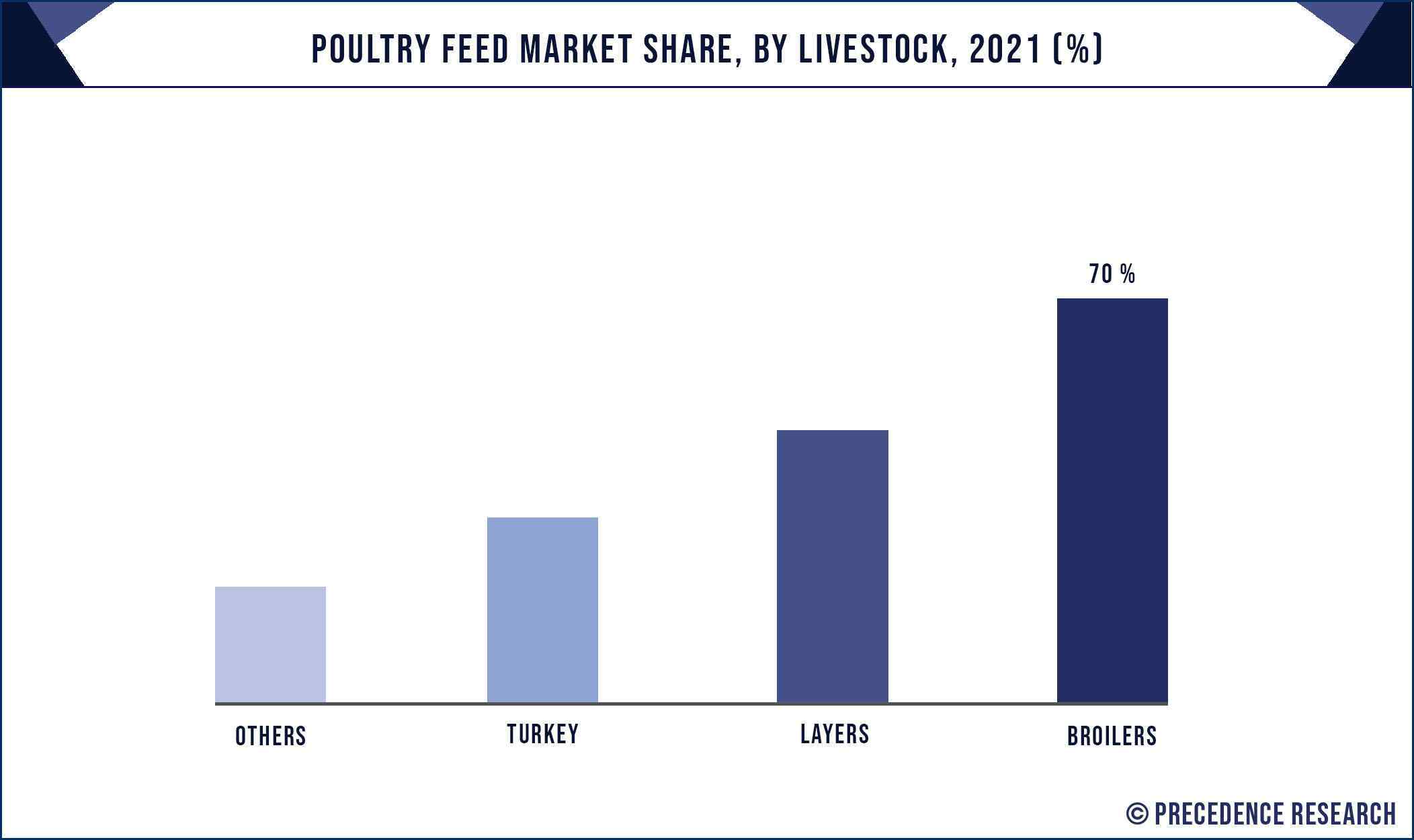 The layers segment is expected to witness strong growth over the forecast period. The primary purpose of layer farming is to produce eggs. As the world’s population grows, so does the demand for food and energy, resulting in an increase in layer production around the world. The key factors driving the demand for the layers segment are rising per capita egg consumption and worldwide population increase.

The vitamins segment is projected to grow at a strong growth during the forecast period. Vitamins are a collection of chemical molecules that must be consumed in modest amounts. Vitamins are vital additives because they govern regular bodily processes, reproduction, and growth. Water soluble vitamins and fat-soluble vitamins are two types of vitamins that can be found in the body.

Asia-Pacific region accounted revenue share of around 40% in 2021. India and China dominate the poultry feed market in Asia-Pacific region. The growing production of feed in emerging regions is driving the growth of Asia-Pacific poultry feed market. The poultry sector accounts for roughly 70% to 75% of the Indian commercial feed business in 2019. Nearly 39 million metric tons of commercial feed were produced in the country. Poultry feed accounts for roughly 24.9 million metric tons of the country’s feed production in 2019. 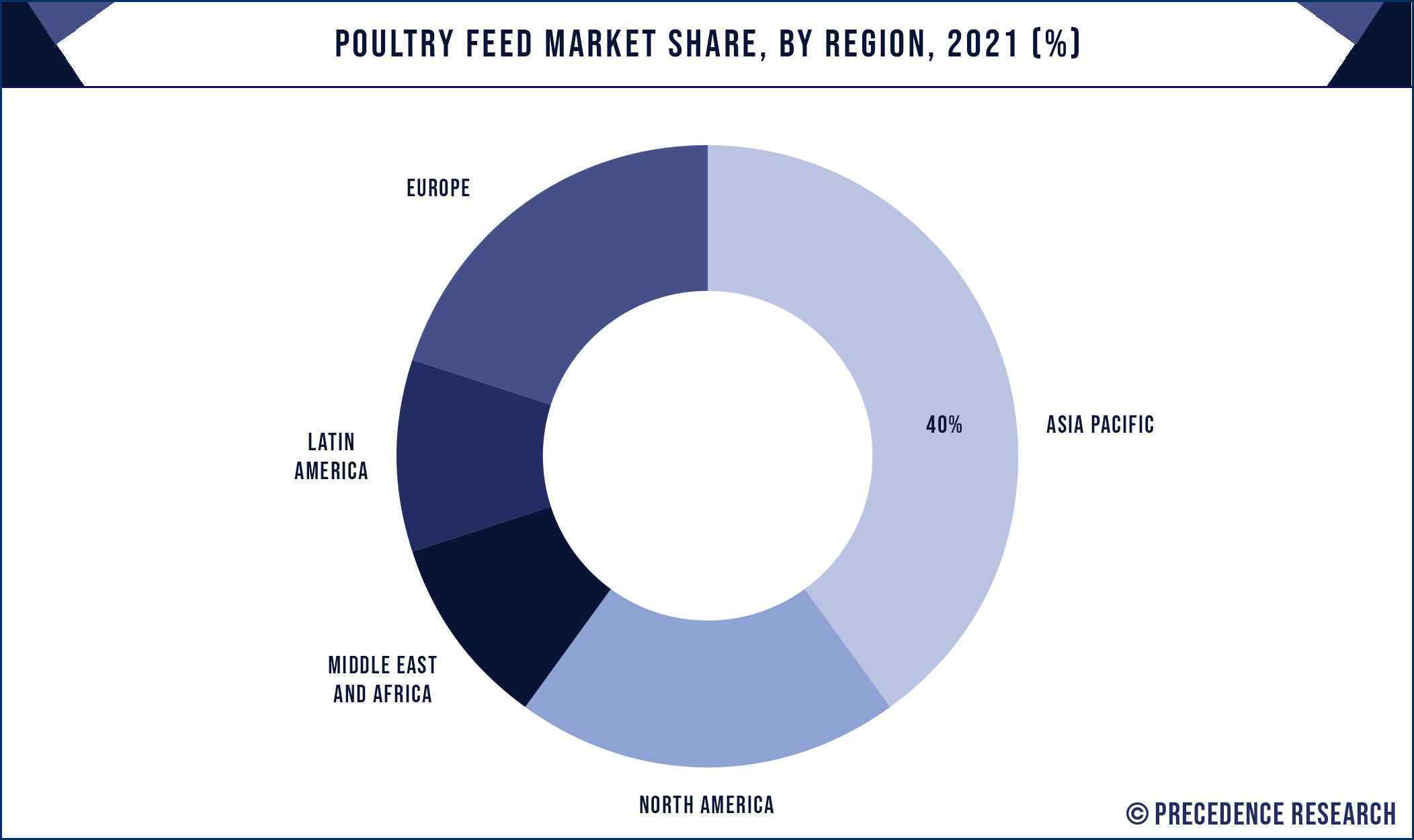 North America is expected to develop at the fastest rate during the forecast period. The North American companies are engaged in meat and chicken-based ingredients processing. The North America poultry feed market is being driven by factors such as growing government initiatives, stringent government regulations, and high investments by government bodies. The poultry feed market in North America region is expected to grow due to rising broiler production in the region and customers’ preference for poultry products due to their lower prices when compared to other alternatives.

Some of the prominent players in the global poultry feed market include: