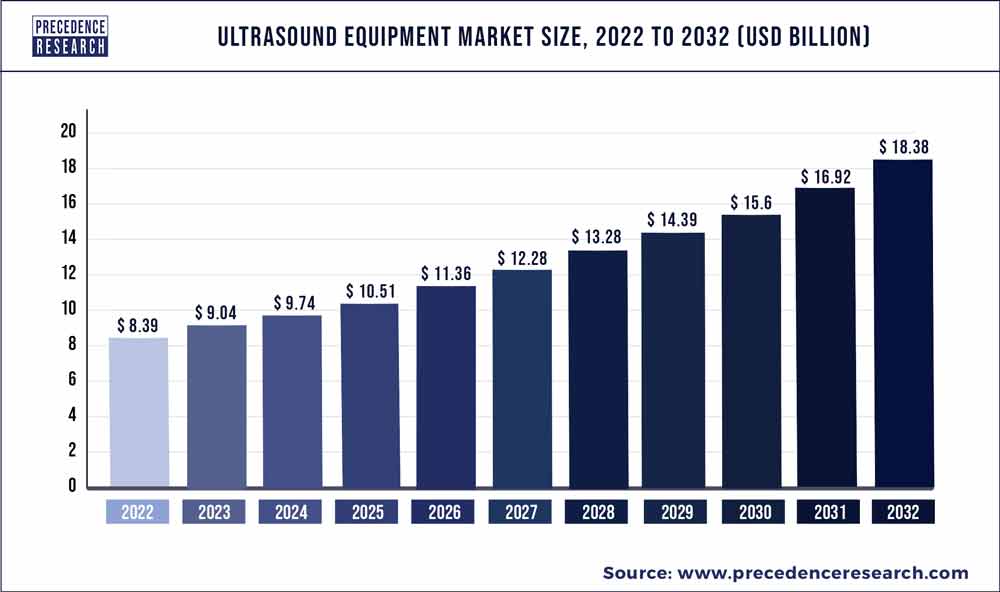 The ultrasound equipment market is driven by the extensive use of this equipment in the diagnosis of various chronic diseases related to various body parts such as heart, joints, abdomen, and blood vessels. It is considered to be the most convenient equipment used for the diagnosis of the internal organs. The rising burden of chronic diseases, growing geriatric population, and increasing government investments to develop healthcare facilities is positively boosting the market growth. The increasing demand for the diagnosis among the population is fostering the demand for the ultrasound equipment. According to the CDC, in 2019, there were 45 million outpatient surgeries, over 900 million physician visits, and 155 million emergency department visits in US. Further, according to the American Heart Association, more than 40% of the US adults are expected to be affected with hypertension by 2030. According to the International Diabetes Federation, by 2025, the number of diabetic population is expected to reach around 228 million in the developing nations. Hence, the rising number of patients is significantly boosting the demand for the ultrasound equipment and is expected to rise further during the forecast period.

Furthermore, the rising number of research and developmental activities have led to the integration of latest technologies like artificial intelligence in the ultrasound equipment that presents a new growth prospect to the market players. The introduction of AI in the ultrasound helps to overcome several limitations associated with the previous equipment such as unclear images and long duration. This technological development is expected to boost the market growth in the upcoming years. Moreover, various developmental strategies adopted by the key market players like new product launches with innovative features is expected to drive the market growth. For instance, Samsung Medison launched RS85 Prestige ultrasound solution with improved and efficient scanning features at the Radiological Society of North America in order to expand their market share in the global market.

Based on product, the table-top segment accounted largest revenue share in 2020 and is estimated to sustain its dominance during the forecast period. This is attributable to the increased adoption of the table-top ultrasound equipment in the healthcare sector owing to its low cost as compared to that of the compact ultrasound equipment. The segment is expected to grow further owing to the rising government expenditure in the developing economies to build hospitals to improve the healthcare sector. 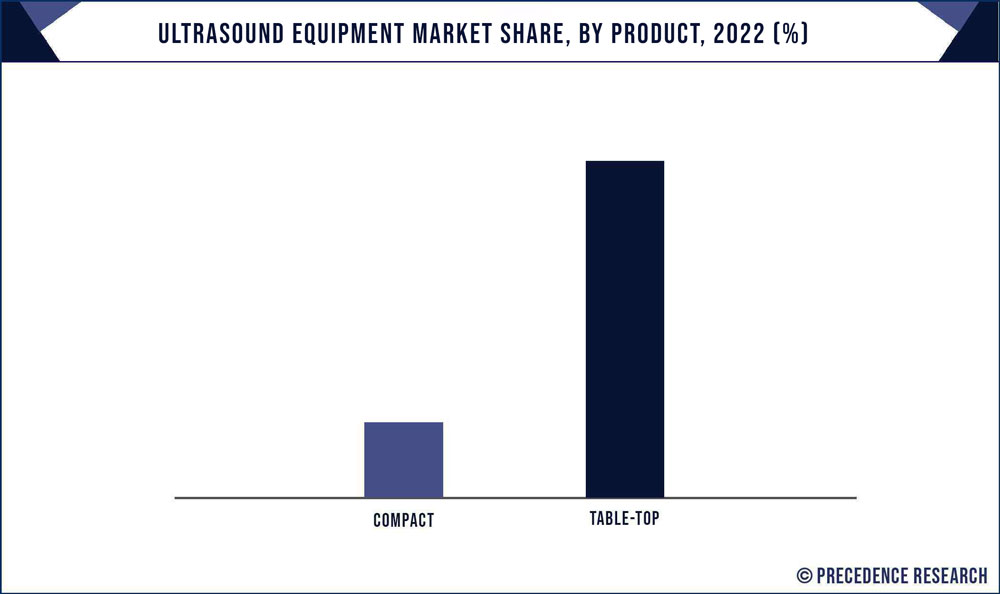 On the other hand, the compact segment is anticipated to register the highest CAGR during the forecast period. This can be attributed to the enhanced features of the compact ultrasound equipment such as instant and accurate ultrasound results, safety, improved radiation-free imaging, and non-invasiveness. These features are considered to be boon in emergency setting and thus the adoption of compact ultrasound equipment is expected to register a significant growth in the forthcoming years.

Based on end user, the hospitals segment dominated the largest revenue share in 2020 and is projected to witness notable CAGR during the forecast period. This can be attributed to the extensive use of ultrasound equipment in the hospitals across the globe. Ultrasound equipment is a boon in the diagnosis of various chronic diseases and hence is widely used across the hospitals. Moreover, rising number of patients and hospital admissions is perfectly complementing the growth of this segment. 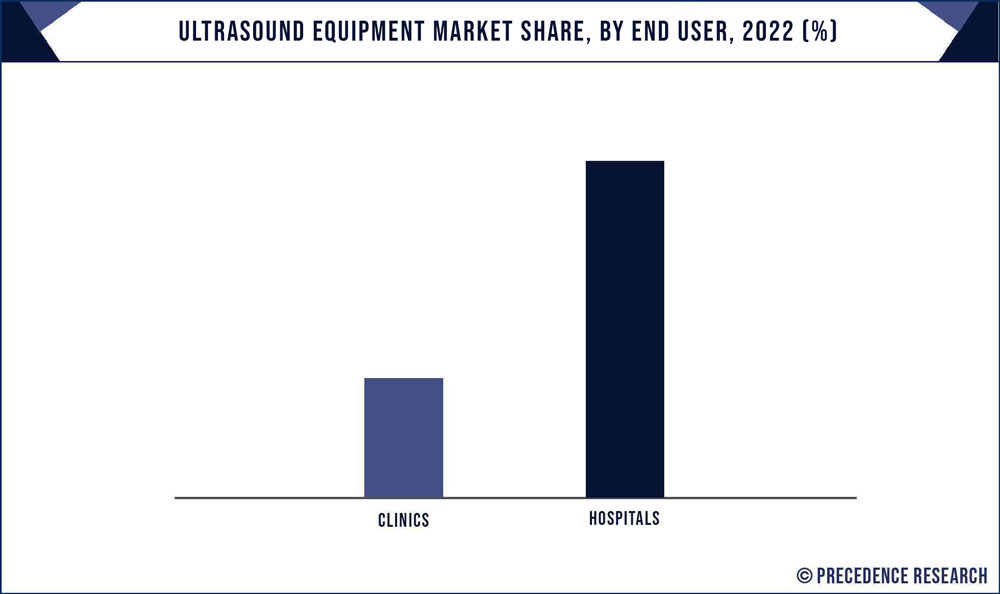 On the other hand, the clinics segment is estimated to be the fastest-growing segment. The rising demand for the diagnosis of various diseases is fostering the growth of the clinics. According to the CDC, in 2019, there were over 900 million physician visits in US. Further, the rising penetration of private clinics in the developed and developing economies is a major factor fueling the growth of this segment.

Based on application, the radiology segment accounted largest revenue share in 2020 and is anticipated to hit notable CAGR during the forecast period. There are various factors that fuels the demand for radiology such as growing geriatric population and rising prevalence of diseases such as cancer and cancer survivors. Furthermore, the developing economies are expected to drive the demand as the developing economies holds a vast potential for expansion in healthcare sector.

On the other hand, the gynecology segment is estimated to register highest CAGR during the forecast period, owing to the increasing usage of ultrasound diagnosis during pregnancy. According to NCBI, the average number of ultrasound diagnosis performed during pregnancy has increased from 1.5 in 1995 to 2.7 in 2006, in US. There are several complications related to pregnancy, reproductive system, and fertility that needs to be diagnosed by the ultrasound systems.

Based on region, in 2020 the North America dominated the market in terms of revenue and is projected to surpass remarkable CAGR during the forecast period. This can be attributed to the increased adoption of advanced system and technologies in the healthcare sector of North America. The growing geriatric population in US and rising number of private clinics and hospitals is boosting the demand for the ultrasound equipment in the region. 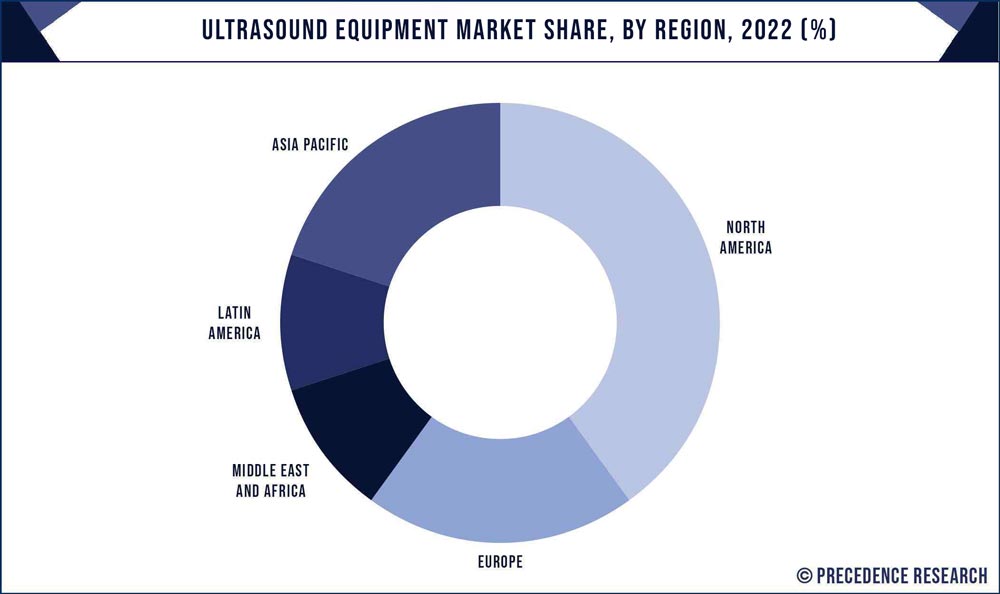 On the other hand, Asia-Pacific is estimated to be the most opportunistic market during the forecast period. The huge population, rising disposable income, increasing expenditure in health and wellness, and growing government investments in the development of sophisticated healthcare infrastructure is boosting the economy of Asia Pacific and the ultrasound equipment markets players have huge growth potential in the untapped region of Asia Pacific.

In August 2020, Koninklijke Philips launched a cardiovascular system named Affinity CVx at the annual meet of European Society of Cardiology. This new system helps to enhance the operation of the cardiology department.

Some of the prominent players in the global ultrasound equipment market include: