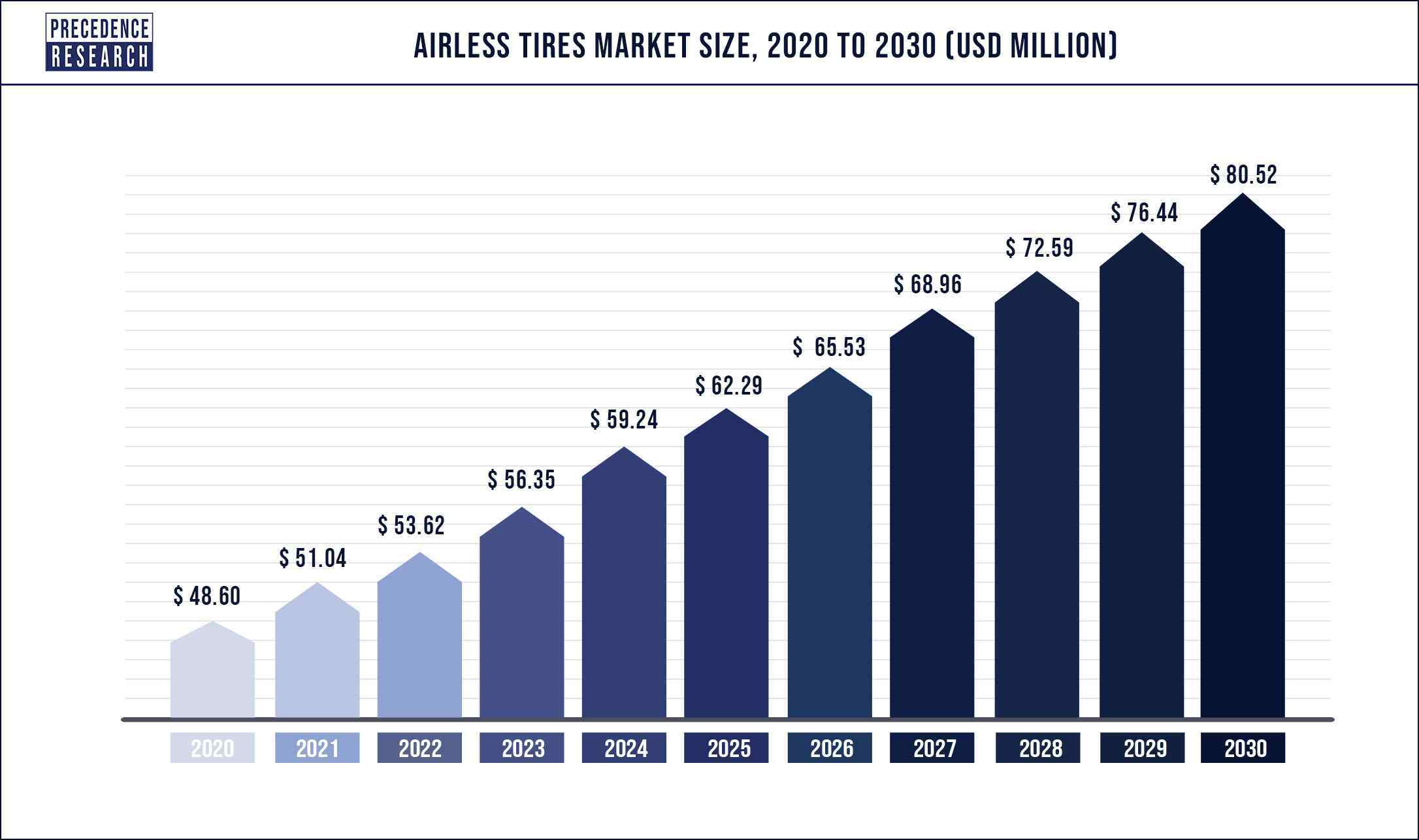 The solid and non-pneumatic tires that are not supported by air pressure are known as airless tires. They’re usually made of plastic or rubber, although 3D printing is being used more and more these days. These tires minimize accidents caused by flat tires and blowouts, as well as ensuring passenger safety. Furthermore, the airless tires market is likely to be driven by an increase in the number of heavy commercial vehicles, such as heavy construction equipment and heavy-duty trucks, as a result of globalization and urbanization.

The increasing demand for all-terrain and military vehicles, ongoing technological advancements to minimize tire vibration and noise, the presence of technology suppliers in the market, and the rising automotive sector are some of the primary factors driving the airless tires market expansion during the forecast period.

However, the substantial capital investment required to establish new manufacturing facilities, as well as the volatility of raw material costs, may limit the airless tires market expansion. The solid tire performance in terms of suspension and friction, as well as heat dissipation difficulties, may hinder the airless tires market expansion. The aftermarket demand for solid tires from passenger vehicles, as well as technological improvements involving new materials, is likely to create significant market potential opportunities.

The increased demand for agricultural machinery has led from governments’ increased focus on the agricultural sector around the world, resulting to increased manufacturing of airless tires. The manufacturers are working on employing frequent technology developments to overcome the issues connected with these tires, such as noise and vibration.

The airless tires market share will be primarily driven by rising acceptance from heavy commercial and off-road vehicles, as well as increasing deployment in the military segment, particularly in developed countries in the North America.

The airless tires have better load bearing capacity, driving performance, and are environmentally beneficial. The consumers are opting for these tires because they eliminate the need for spare tires and provide higher productivity in areas such as manufacturing, construction, farming, and mining.

Scope of the Airless Tires Market

Based on the product, the radial tires segment accounted largest revenue share in 2020. The radial tires are made up of a number of cords that go from the beads to the tread. This permits the cords to be set at almost right angles to the tread’s centerline and parallel to each other, as well as the belts to be laid precisely beneath the tread. The tire’s strength and shape are provided by this network.

The bias tires segment is estimated to be the most opportunistic segment during the forecast period. The nylon belts run at a 30-to-45-degree angle to the tread line on bias tires. The tire’s sidewall and tread are connected by overlapping rubber piles. The bias tires provide several advantages, including smoother rides on rough terrain surfaces and stronger sidewalls.

The plastic is estimated to be the most opportunistic segment during the forecast period. The manufacturers favor plastic materials for airless tire production because they are recyclable. The market will rise as the use of recyclable plastic in the manufacture of two-wheeler tires with plastic spokes increases.

Based on the vehicle type, the two-wheeler segment accounted largest revenue share in 2020. The tires for airless two-wheelers are created from special foams that have been extruded into various shapes. Due to rising population, strong spending power, and favorable legislation, demand for passenger vehicles is increasing at a rapid pace.

Based on the region, the North America segment dominated the global airless tires market in 2020, in terms of revenue and is estimated to sustain its dominance during the forecast period. The increasing use of airless tires in military, terrain, and utility vehicles, as well as market players’ ongoing focus on delivering products for military and defense purposes, are expected to propel North America to the top of the market during the forecast period.

The Asia-Pacific is estimated to be the most opportunistic segment during the forecast period. Asia-Pacific is expected to have considerable growth, which can be due to the presence of manufacturers, easy availability of raw materials, and increased vehicle ownership in the Asia-Pacific region.

To boost their market position, the key market players in the airless tires market are merging and forming joint ventures. For example, the Bridgestone and Goodyear Tire and Rubber Company signed a contract in April 2018 to develop a tire distribution network in the U.S. The key market players are also expected to create strategic alliances in order to boost their distribution channels and product sales.

Some of the prominent players in the global airless tires market include: