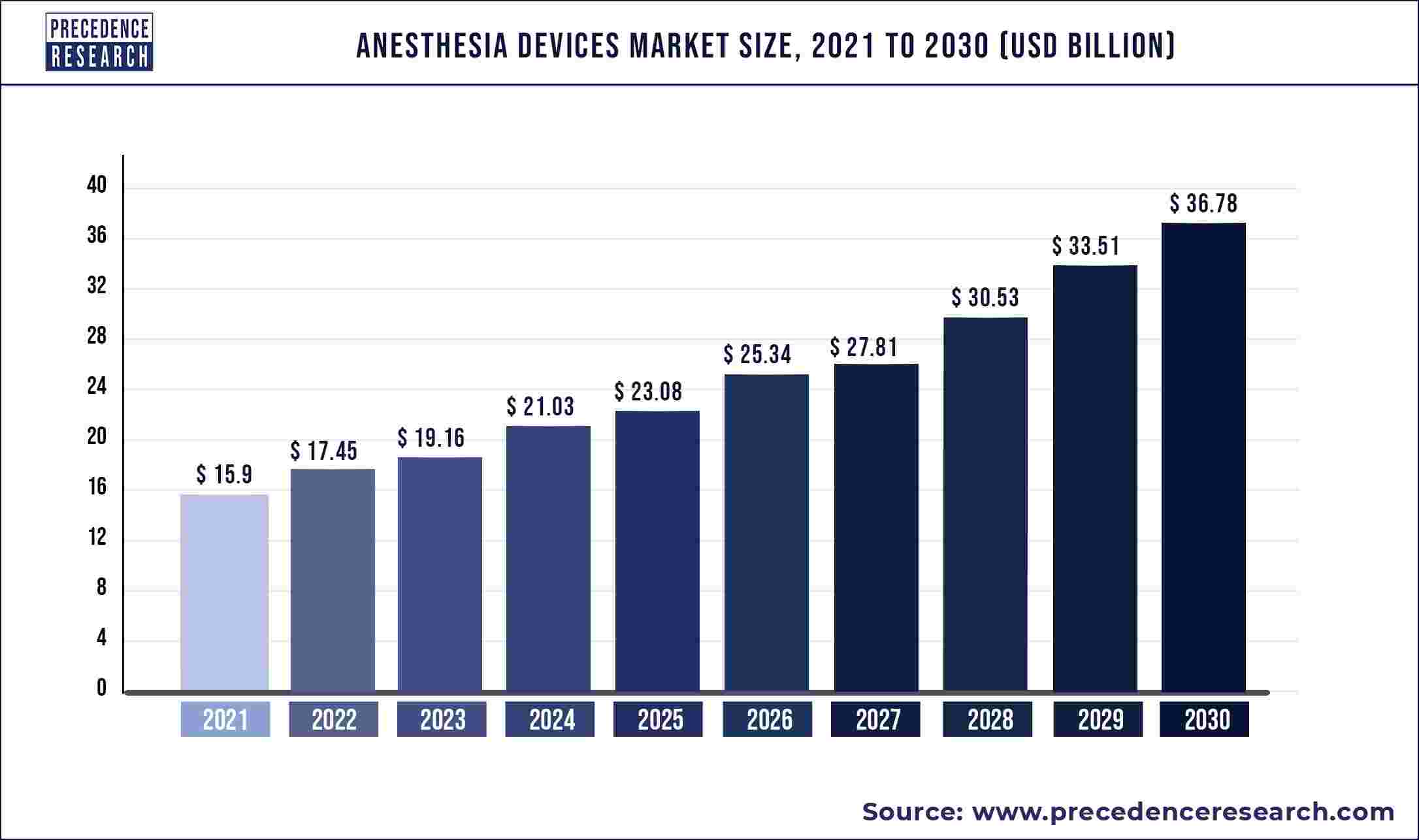 These procedures do have they are only set of negative impacts on the health of the individual which is seen to be present after the effect of the medicine is completed. Since the breathing frequency of the undo visual is altered there are partial chances of hypoxia which is paused during the surgical procedures and hence the patient is in a confused state of mind after the effect of anesthesia is completed. Once the effect of the medicine is over the patient experiences tremendous pain and discomfort as a result of the procedure which was carried out on the body of the patient. Long term side effects are noticed at the site of administration Which are difficult to deal with for the patient. Pain and swelling at the site of administration becomes the most common complaint experienced by the patient. Due to the increasing surgical procedures globally the use of anesthesia devices has increased drastically in the market. The rapid increase in chronic diseases have also increase the number of surgeries which are carried out worldwide. The surgical procedures which are majorly carried out globally include the cardiovascular system, neurological system and orthopedics as they are usually seem to be affected. The increasing rate of high velocity accidents I've given rise to the number of fractures which in turn gives a boost to the orthopedic surgeries carried out.

The occurrence of the pandemic had a major impact on the anesthesia devices market which was proved to be a negative one due to the strict lockdowns and restricted movement which was imposed by the government. The government guidelines along with the hospitals made strict regulations regarding the surgical procedures to be performed in the hospitals. The hospitals opted for elective surgical procedures only in order to avoid the risk of cross infection to the medical staff and doctors. The other optional surgeries were kept on hold which hampered the growth of the market due to lack of operative procedures being performed. The various types of reactions which are seen to be produced in the human body to chemically formulated medicines are proving to be a restraining factor for the growth of the market. The physical ailments which are followed after the administration of the anesthesia have hampered the growth of the market.

The various key players are providing lucrative offers to the consumers as the patients for the chronic diseases are increasing every day. The number of patients belonging to the neurological department and the cardiovascular department have increased beyond limits. As a result of the sedentary lifestyle which is practice in most of the developed countries like the US and Brazil have given rise to numerous chronic diseases limitlessly which has helped to boost the market for the anesthesia devices. Though a barrier was created by the pandemic in the functioning of the hospitals for surgeries and regular patient follow-up.

The market was able to balance itself as the surgeries took place on later dates depending upon their emergency levels. Still a negative impact was being sensed as there was a loss of a certain category of patients. With the advancement in the technology processes which have been adopted by the developed nations, hospitals have become extremely specific regarding the comfort of the patients and hence use the most modern methods to deal with them in order to give excellent facilities. Hence the number of human errors and side effects which were produced previously due to the process of injecting anesthesia have been reduce greatly.

Positive response has been obtained from the patients with the introduction of these new devices with advanced mechanism. The anesthesia device is market had faced multiple challenges in terms of the demand and supply chain during the post lockdown phase. After the reversal of the lockdown phase and restoration of the regular movement of the population the hospitals faced a surge in the number of patients which were previously postponed or lined-up for their surgeries due to the occurrence of the pandemic. This creates a shortage of the resources to be supplied to the patients and hence the procedures were disrupted from their schedule. With the use of modern technology used for the anesthesia procedures the swelling and pain at the site of injection were managed quiet well with lesser side effects were incurred upon the patient. This helped the market to create a confidence among the consumers to opt for such surgical procedures, hence the growth was seen to be strengthened during the forecast period. On the other hand, the high cost associated with these advanced equipment's and techniques imposes an additional barrier in the growth phase of the market.

The developing and under developed nations do not have such a strong economic foothold to purchase or develop such advanced technologies which hampers the growth of the market. Whereas, the developed nations have shown a considerable growth as a result of the high disposable income available with the population and hence a higher acceptance to the use of modern technology for surgical procedures is observed in the market. The success rate of the procedures too is seen to rise with the use of modern technologies in the anesthesia devices market. The condition of the patient is displayed in a better format which helps the human mind to take better decisions and thus avoid unexpected errors. It has proved to be a boon to the mankind by reducing the risks involved in this procedure. These various factors will help the market to record a high revenue return during the forecast period.

On the basis of product, the anesthesia delivery machine dominates the segment globally and is forecasted to continue its performance in the coming years too pertaining to the rapid technological advancements that are experienced in this field. Anesthesia disposables and accessories presents itself as the next competitor which has shown a considerable amount of growth in the market as without it the procedures remain incomplete. Laryngoscopes and anesthesia circuits too have shown a good performance depending upon the market. HME, anesthesia masks and many other products are in line after these which have supported the market growth during the forecast period. Anesthesia monitors are one of the important players in this category as they help to monitor the condition of the patient which is very important.

Orthopedic being the most commonly observed department in the hospitals has dominated the market during the forecast period. The prevalence of the increasing bone disorders among the youngsters and the elderly people have helped to boost the market tremendously. Lack of proper diet among the geriatric population has increased the occurrence of fractures which has propelled the market growth. Neurology and urology being another major market for this segment has shown a considerable growth during the forecast period. Dental services commonly make use of anesthesia in order to mask the pain and discomfort of the patients which has helped to boost the market revenue. Cardiovascular diseases have also shown a considerable amount of contribution to the market as a result of the sedentary lifestyle practices followed by the people in the developed countries.

Hospitals being the most common place to be visited in the event of a surgical procedure becomes the leading segment and is projected to rule the market in the near future too. The varied setup that is provided by them well equipped with various other accessory facilities for the patients has helped them to dominate this segment. Clinics and ambulatory service units fall next in-line which mainly get included in the dental and opthalmology sector where primary procedures are taken care of by the doctors.

The North American market has dominated this segment as a result of the rapid adoption of advanced technologies and equipments for surgeries and procedures. The increasing prevalence of chronic diseases which is clubbed with upgraded technology helps the market to record a considerable growth during the forecast period. The increasing acceptance for the use of modern technologies for surgical procedures has boosted the economy enormously. The Asia-Pacific region has also helped to boost the market significantly owing to the increasing demand for modern technology for treatment and surgical procedures. The rapid growth in the geriatric population pertaining to the increased life expectancy of the people has given rise to a number of chronic diseases and other systemic disorders which in-turn demand the use of advanced equipments for treatment. The European nations along with the middle eastern region has contributed significantly to the growth of the market.

In January 2020, a new Altan group of anesthesia stations were launched by Drager at Arab Health. This was formulated to simplify the procedures in order to make working conditions feasible for the medical fraternity.