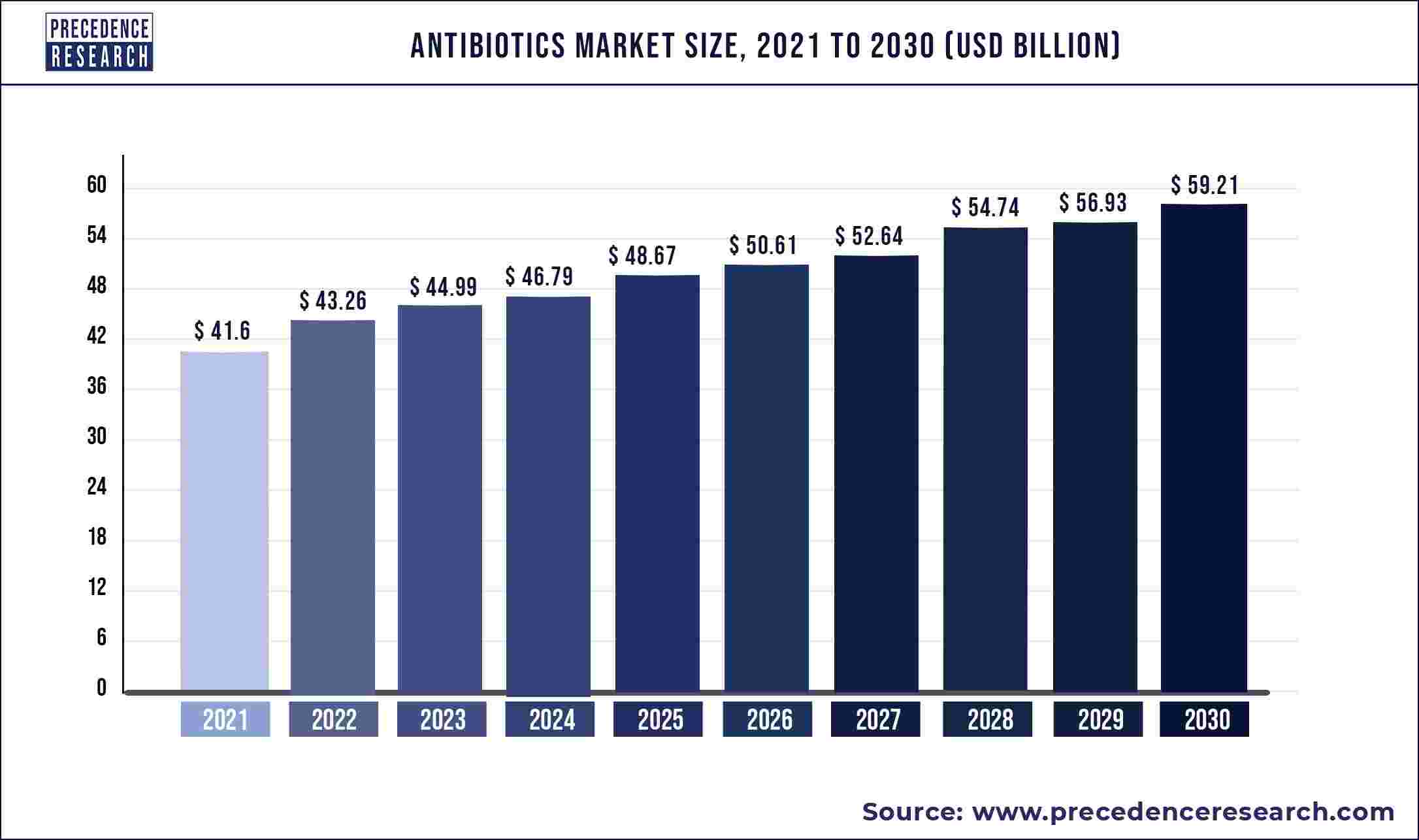 As a result of the rapid modernization and urbanization the number of people suffering with chronic diseases has increased to a great extent. In order to treat these diseases, the sales and demand of advanced antibiotics has seen a steady rise over the period of time. Huge number of people belonging to the geriatric population all over the world has proved to be a major market for the growth of the antibiotic drugs. the rapidly increasing number of infections among the people relating to the various systems of the body has proved to be a major driving force for the growth of the market.

Infectious diseases are very common among the health care workers as a result of hospital acquired diseases which require greater use of antibiotics. In order to follow the hospital protocol, the patients are made to stay in the hospital premises for a longer period of time which proves to be a major reason for hospital acquired infections and as a result of this the consumption of antibiotics increases to a great extent. In order to get an infection treated people usually prefer a hospital over clinics as a result of the huge number of facilities that are provided by this healthcare center. With the advancements in technology and the launch of new medicines into the market the cost of treatment is also increasing rapidly which proves to be a restraining factor for the growth of the market.

With increasing awareness regarding the side effects caused by long term use of antibiotics the demand and supply chain is getting hampered tremendously. This has also led to a higher demand for natural medicines and treatment procedures over the use of antibiotics. With the rapid use of antibiotics all over the world, a drug resistance has been noticed by the key market players which proves to be a major challenge for the market.

Report Scope of the Antibiotics Market

The outbreak of the pandemic had a major impact on the growth of the market as a result of the rapidly spreading infection. The antibiotics market faced a huge demand as a result of the ongoing pandemic. The lucrative schemes and offers provided by the insurance companies in the form of reimbursement facilities has also proved to be a major driving factor for the antibiotics market.

Rapid results which are obtained with the use of advanced antibiotics launched into the market by the key market players has proved to be a major factor for the growth of the market. But the increasing development of modern medicine the number of side effects have been considerably reduced which helps patient to have confidence over the system and opt for antibiotics as a line of treatment.

Antibiotics have shown or significant effect by controlling the infectious diseases among the people belonging to the younger age groups including children and infants which has proved to be a great opportunity for the growth of the market during the forecast period.

On the basis of drug class, the penicillin type of drug has shown the maximum growth with the largest number of share under its domain as a result of its rapid sales and supply in the market. It is a rapidly used class of drug all over the world which helps to increase its demand tremendously. Countries like South Korea, Italy, Spain and Hong Kong have been the largest markets available for the drug class of penicillin. Narrow spectrum and broad-spectrum type of penicillin drugs have been consumed in a large scale by these countries.

The other classes of drugs which are included under this heading are cephalosporin, tetracyclin, microlides, suifonamides, fluoroquinolones and aminoglycosides. These other classes of drugs also have contributed significantly to the antibiotics market. With the rapidly increasing number of chronic elements among the people the use of antibiotics has increased to a great extent globally.

On the basis of application, the market has been subdivided into skin infections, urinary tract infection, ear infection, septicemia, gastrointestinal infection and respiratory infections. Among these the respiratory infection has shown the maximum growth as a result of the huge number of patients who fall under this category. With the rapidly increasing global pollution and climate change the number of people suffering with respiratory disorders has increased tremendously. The outbreak of the pandemic had a severe impact on the respiratory system of the people which has proved to be a driving factor for the market.

The military system of the people has been hampered tremendously which has a direct impact on the respiratory organs. Rapidly increasing demand for medicines in order to treat respiratory disorders Is there a sponsible for the growth of the antibiotics market during the forecast period. The urinary tract infection segment is considered to be the next largest segment which has dominated the market with the highest demand and supply.

The skin infections market has also shown a considerable growth as a result of the huge population suffering with it. The rapid research and development which is carried out by the key market players has made the drugs related to these disorders The key market players which are held in pipeline for the forecast period.

On the basis of route of administration, the parenteral route it's the fastest growing market and has held the largest share whether it's high demand among the people. The rapidly increasing technological development and minimum amount of dose that is being administered with the help of syringes has boosted the demand tremendously. The rapidly rising number of patients who are getting admitted in hospitals in order to get treated for infections and ailments have helped this market to record a considerable growth during the forecast period.

The greater number of days which are patient has to spend in the premises of the hospital also proves to be a driving factor for the growth of the market. With the increasing time that the patient has to spend in the hospital premises the number of infections which the patient suffers with increases. This proves to be a major opportunity for the growth of the market. In order to control the hospital acquired infections various health care organizations have taken multiple steps and imposed rules and regulations in order to manage them. The application of parenteral drugs has been encouraged in order to prevent the spread of hospital acquired infection. The oral segment has shown a significant growth in the market as a result of the number of people who prefer to self-drug themselves by considering medicines over-the-counter. These multiple factors have proved to be the opportunities for the market during the forecast period.

On the basis of distribution channel, the hospital sector has been considered as the largest as a result of the huge number of patients that choose a hospital set-up for getting treated in case of infections over the other types of health care sectors. The rapidly increasing specialized hospitals in the society has also attributed to the growth of this segment rapidly. The presence of specialists in the hospital domain has also proved to be a driving factor for the growth of the market.

With the increasing trend of online shopping people prefer to purchase medicines and drugs through the online pharmacies which has also proved to be a driving factor for the market. on the other hand, the retail pharmacies have shown a tremendous growth as a result of the increasing number of over-the-counter purchases performed by the patients in order to avoid the additional hospital expense.

The online research which is carried out by the patient themselves is responsible for this increase in over-the-counter purchase of drugs. Belonging to the average class usually prefer to choose this distribution channel in order to get themselves treated. The outbreak of the pandemic had a serious impact on the hospital sector which boosted in the segment of online pharmacies.

On the basis of geography, the global market has been dominated by the region of North America as a result of the advanced Health care facilities which have been provided to the people by the government. In such developed nations as a result of the busy lifestyle and rapid modernization, a huge population in the country is seen to be suffering with ailments and other chronic diseases. This proves to be a major driving factor for the growth of the antibiotics market during the forecast period. The rapid research and development which is carried out in these countries also proves to be a driving factor for the growth of the market. The existence of key market players in such countries has led to the introduction of advanced drugs in the market which boosts the demand considerably.

The European nations have been considered to be the second largest market for antibiotics as a result of the huge geriatric population residing in this region. The recent developments that have taken place regarding the facilities provided by the government through the healthcare sectors has boosted the demand for advanced antibiotics in order to provide a better service to the people. The Asia Pacific region is anticipated to exhibit the fastest growth in terms of compound annual growth rate as a result of its developing status which includes a huge number of patients suffering with various diseases.

By Spectrum Of Activity