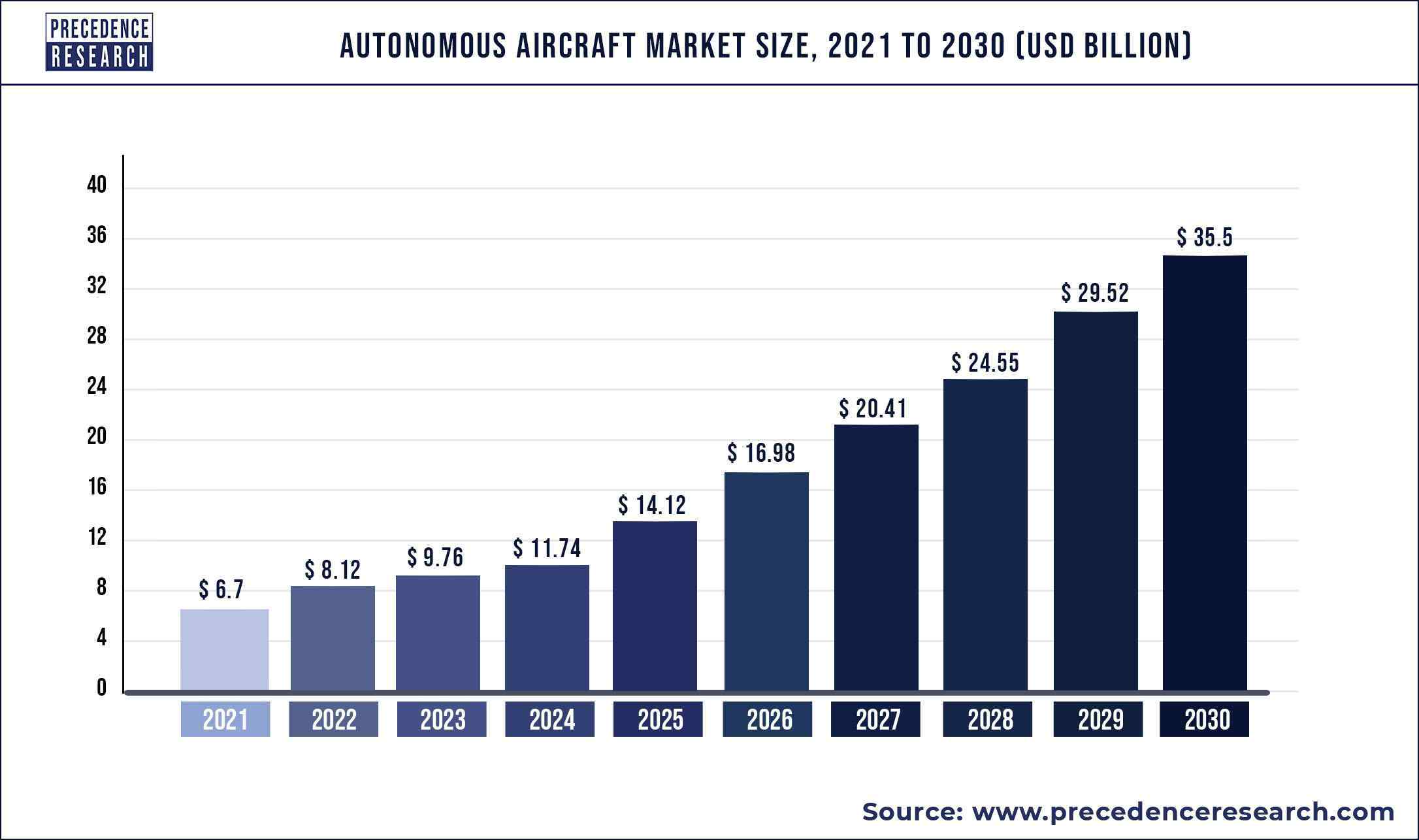 As per the International Civil Aviation Organization (ICAO) autonomous aircraft can be defined as an unmanned or fully-automated aircrafts that has no pilot interventions during a flight. Presently, the aircrafts used by military and civil organizations require help of pilots and to some extent they have autopilot features as well. Similarly, in autonomous aircrafts a pilot can switch to full operation mode whenever required and rest of the time can take the benefit of autonomous features provided in the plane. Autonomous technologies reduce the risk of accidents and mishappening during the flight; hence, witness exponential growth in the market revenue during the forthcoming years.

Moreover, the rising need for curtailing costs, eliminate human errors, and increase operational efficiency of the air crafts is boosting the demand for the AI and IoT in the development of autonomous aircrafts across the globe. The adoption of the AI and IoT offers high precision, speed, accuracy, and real-time information to the operators which are boosting the adoption of the autonomous aircrafts. The globalization of businesses and growth in the e-commerce business at a significant rate in the past few years have significantly increased the demand for the cargo flights for the delivery of goods at faster pace.

Similar to other industries, autonomous aircraft market was badly impacted by the sudden outbreak of COVID-19 in the early 2020. Delay in the test runs for autonomous flight system because of numerous operational issues caused due to the travel restrictions imposed by the governments of various nations across the world in order to control the spread of the deadly corona virus. Stringent norms imposed by the governments across the globe during the pandemic period have negatively impacted the research & development activities across various sectors including autonomous aircraft. The development and innovation in the aircraft technology and systems were delays and dragged back to several years because of the sudden halt in the research & development activities in the sector.

Autonomous flight system manufacturers rely increasingly on the timely supply of necessary components along with required raw materials in order to test and develop the autonomous system =s for aircraft. In addition to this, heavy financial loss suffered by the aviation industries across various countries especially across the emerging nations because of insufficient government fund for the maintenance of aircrafts and airports along with steep fall in air traffic has also badly hampered the industry growth. This was majorly attributed to the huge shift in the government funding towards healthcare sector in respect to meet the necessities of the hospitals and other healthcare service provider to cater the rising demand for beds, medicines, PPE kits, and other necessary products to fight effectively against COVID-19. 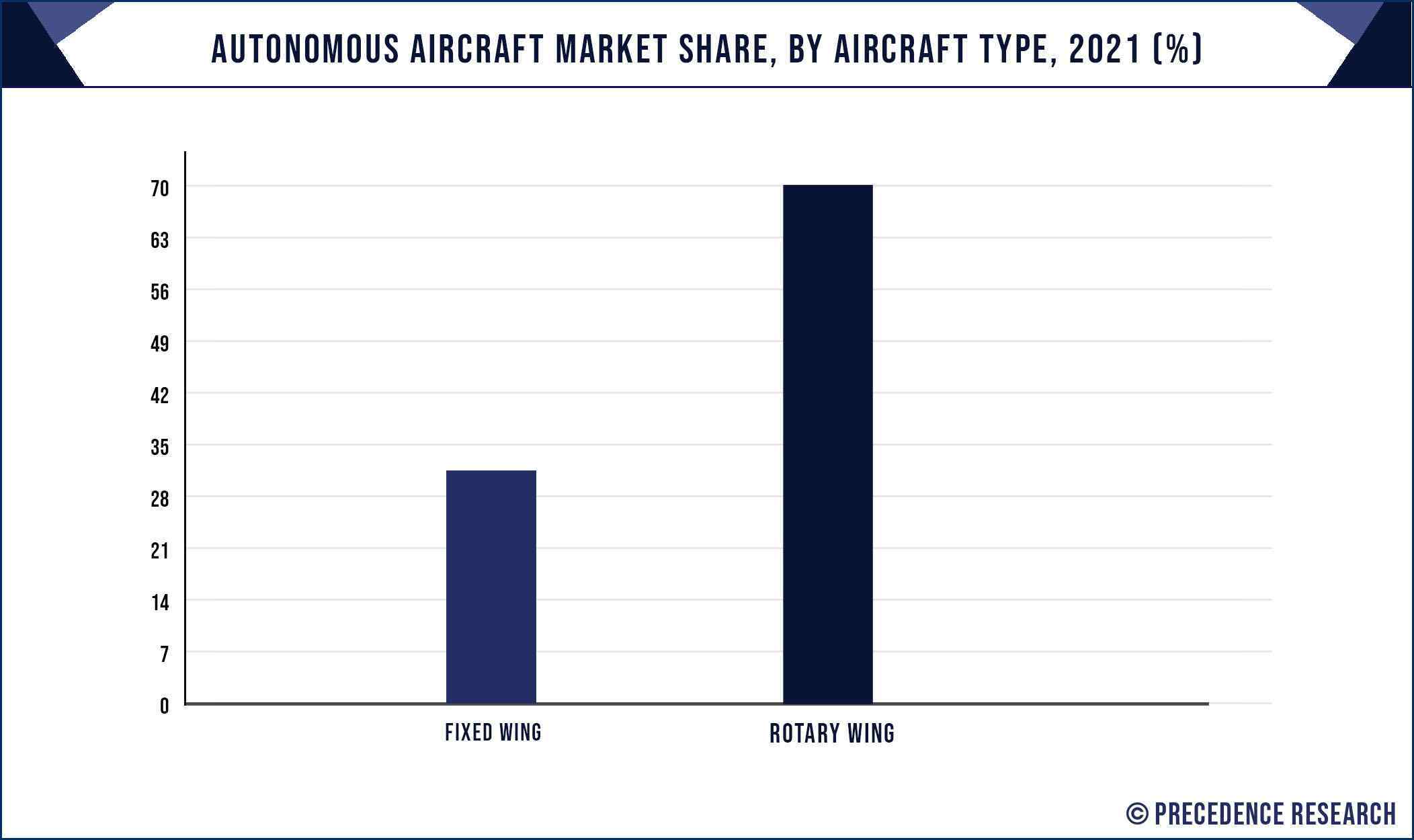 The fixed wing is expected to be the fastest-growing segment during the forecast period. The demand for the fixed wing aircraft is growing owing to its increased operational efficiency, improved aerodynamic performances, and higher payload versatility. The installation of the twin sensor configuration on this aircraft is boosting its adoption in the critical military operations and search & rescue operations. Furthermore, the high load carrying capacity of this aircrafts is further expected to boost its adoption.

Based on the components, the hardware segment dominated the global autonomous aircraft market in 2021. The high prices of the various hardware components of the autonomous aircrafts such as flight management computers, cameras, transponders, sensors, intelligent servos, actuation systems, and air data inertial reference units has led to the higher revenue generation. Moreover, the advancements in the designing and components like speed controllers, cooling systems, and motor stator is boosting the demand for the advanced hardware components across the globe.

Software is anticipated to be the most opportunistic segment during the forecast period. The growing demands for the software for real-time data transfer and efficient operation is boosting the growth of this segment. The adoption of the flight management software facilitates in the overall control of all the operations in an autonomous aircraft. With the surging demand for the autonomous aircrafts, the demand for the flight management software is expected to grow significantly and hence boost the growth of the software segment during the forecast period.

Asia Pacific is expected to be the fastest-growing market during the forecast period. The surging military budgets of the government in the nations like China and India are significantly driving the growth of the Asia Pacific autonomous aircraft market. The border disputes of China and India with their neighboring countries and growing need for supplying various necessity goods to the various military bases at the mountainous regions is expected to boost the demand for the autonomous aircrafts. Further, the demand is growing significantly for rescue operations and surveillance activities.

The major market players are engaged in making contracts with the various government and military bodies in various countries to sell their autonomous aircrafts. The technological advancements and innovations in the unmanned aircrafts is attracting the interests of the government to strengthen their air defense. Technology upgradation plays an important role in maintaining or retaining the market position across the globe. Additionally, increasing penetration of autonomous technologies across various sectors have encouraged several players to invest significantly in the automation and R&D for autonomous aircraft.

Some of the prominent players in the global autonomous aircraft market include: