The global autonomous vehicle chips market size is projected to reach around USD 29 billion by 2030, growing at a compound annual growth rate (CAGR) of 38.1% during the forecast period 2022 to 2030. 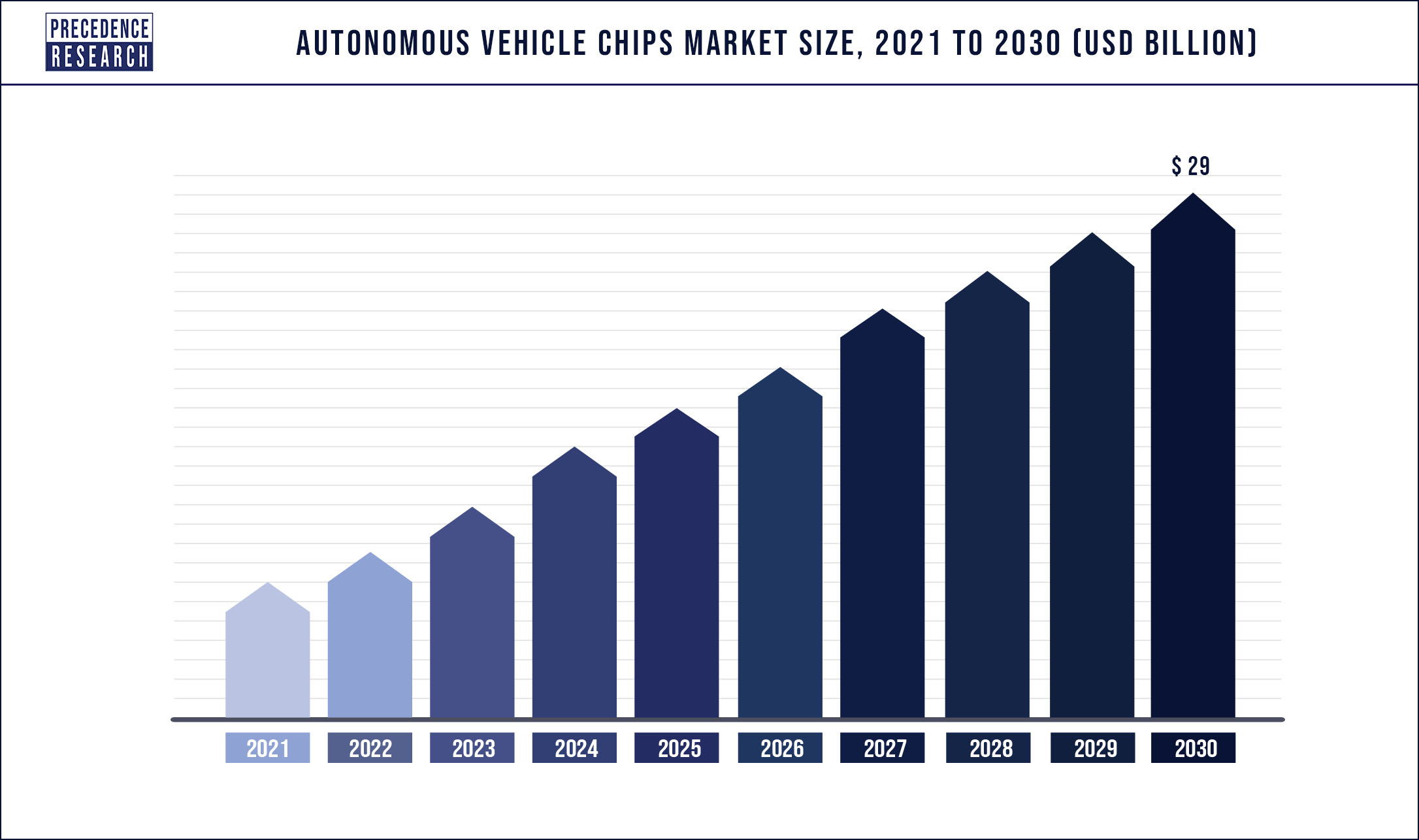 During the pandemic due to the strict lockdown and restrictions on movement the manufacturing companies had seen a downfall of about more than 50% across many developed nations. After the pandemic there has been an increase in the demand for autonomous vehicles and the market is expected to grow in the coming years. Increase in the sales of these cars has provided a growth to the semiconductors market. As an increasing demand for (Advanced Driver Assistance Systems) ADAS They shall be a growth in the revenue of the chips market. Different manufacturers require a different quantity of semiconductors for the automation in the car. The semiconductor is used by these manufacturers are dependent upon the extent of automation provided in these cars. Standard chips are used in vehicles which do not require any automation.

In order to manufacture these chips and for the market to grow the original equipment manufacturers need to have expert employees and they need to tackle any sort of delays. North America has been the pioneer for most of the technologies used across the globe and this region has had the largest market share when it comes to the use of autonomous chips. This region has contributed the most for the growth of this market. due to an increase in the geriatric population of the developing as well as the developed nations across the globe there is a growing need for comfort driving which is leading to a growth of the chipset market. Dual income households have led to an increase in the purchasing power which has created a great demand for autonomous vehicles in this region. and increase in the per capita income of the developing nations is also creating a demand for autonomous vehicles. There has been an increase in the number of initiatives taken by various governments in order to promote the autonomous vehicles market and this shall also generate revenue for the chipsets in the coming years. If there's an increase in the focus on having safer cars and this much needed safety is provided by the autonomous cars due to the use of technology which helps in avoiding road accidents the market is expected to grow in the coming years. Increasing awareness regarding the availability of these cars and the features offered by these various autonomous cars has created a demand for them. From the United States and the European region there's a growing demand for these cars as they provide the safety of the passenger.

The advanced driver assistance system has been the most advanced safety system in the autonomous vehicles. This AEB segment is expected to have the largest market share in the coming years. The automatic emergency braking system has dominated the market in the past when it comes to the chipset market. There has been an increase in the use of various components like the microcontrollers as well as the sensors in this segment. The use of these sensors used in the advanced driver assistance system helps in preventing any fatal accidents. The most important factor that is expected to drive the market growth for the chips market is the compulsory installation of AEB in the cars. Incorporation of various safety features in the autonomous vehicles has created a great demand for the use of semiconductors. Since 2015 European Commission made it mandatory to install AEBS in all the vehicles in order to prevent any road accidents or casualties. The North American region is also working on the same lines.

Apart from the growing demand for semiconductors for the automatic emergency breaking there shall be an increase in the demand for various segments like the traffic recognition and lane correction. Due to an increasing demand for these safety features the result success in the applications which will create a greater demand for semiconductors. This feature helps in avoiding blind spots. With the use of multiple sensors Parking can be done automatically without any help from the driver. The availability of 5G network along with the cloud service valet parking is the new technology which has increased use of semiconductors. The acceleration and the break along with the steering is all controlled with the help of multiple sensors that safely park the vehicles. There has been an increased use of camera sensors which help in monitoring the driver in order to gauge his attention while driving. In some of the cases where the driver is not at all attentive the system is able to stop the vehicle completely in order to avoid any accident.

On the basis of application, the driver assistant features is expected to have a larger market share in the coming years. The advanced driver assistance system is a technology which ensures safe for travel by improving the operation of a vehicle. This feature is extremely useful as many accidents are caused due to the mistake of the driver. There's an increased use of this feature as it helps in reducing the number of injuries and deaths. There's an increased use of navigation system in the cars. Which provides instructions to the driver. It gives the exact information relating to the roads that could be avoided the traffic on the route and it also helps in controlling the speed during the drive.

On the basis of geography, the global autonomous driving chipset market is has the largest market share in the North American region. ADV chipsets are highly in demand in these nations. There's a maximum consumption of ADV chipsets in The United States. In the recent years North American region had a share of about 70% in terms of revenue. Increased adoption of safety regulations by the Government of Canada and the USA has made it compulsory to adopt a few safety features. It includes AEB and FCWS. The increased purchasing power or having a higher purchasing power in the North American region has enabled the population to purchase automatic cars.

Growth in the awareness regarding the safety features available and the benefits is driving the market in the North American region followed by the North American region the Asia Pacific market is also expected to have a larger market share in the coming years. The government in this region has made it mandatory to have the AEB feature in the entire vehicle running on the roads. Increased number of road accidents has compelled the government to take safety measures in order to reduce the casualties and fatalities. The Asia Pacific market is also expected to see a growth in the coming years. Increase in the disposable income has raised the purchasing power which will help the population in this region to purchase autonomous cars in the future.