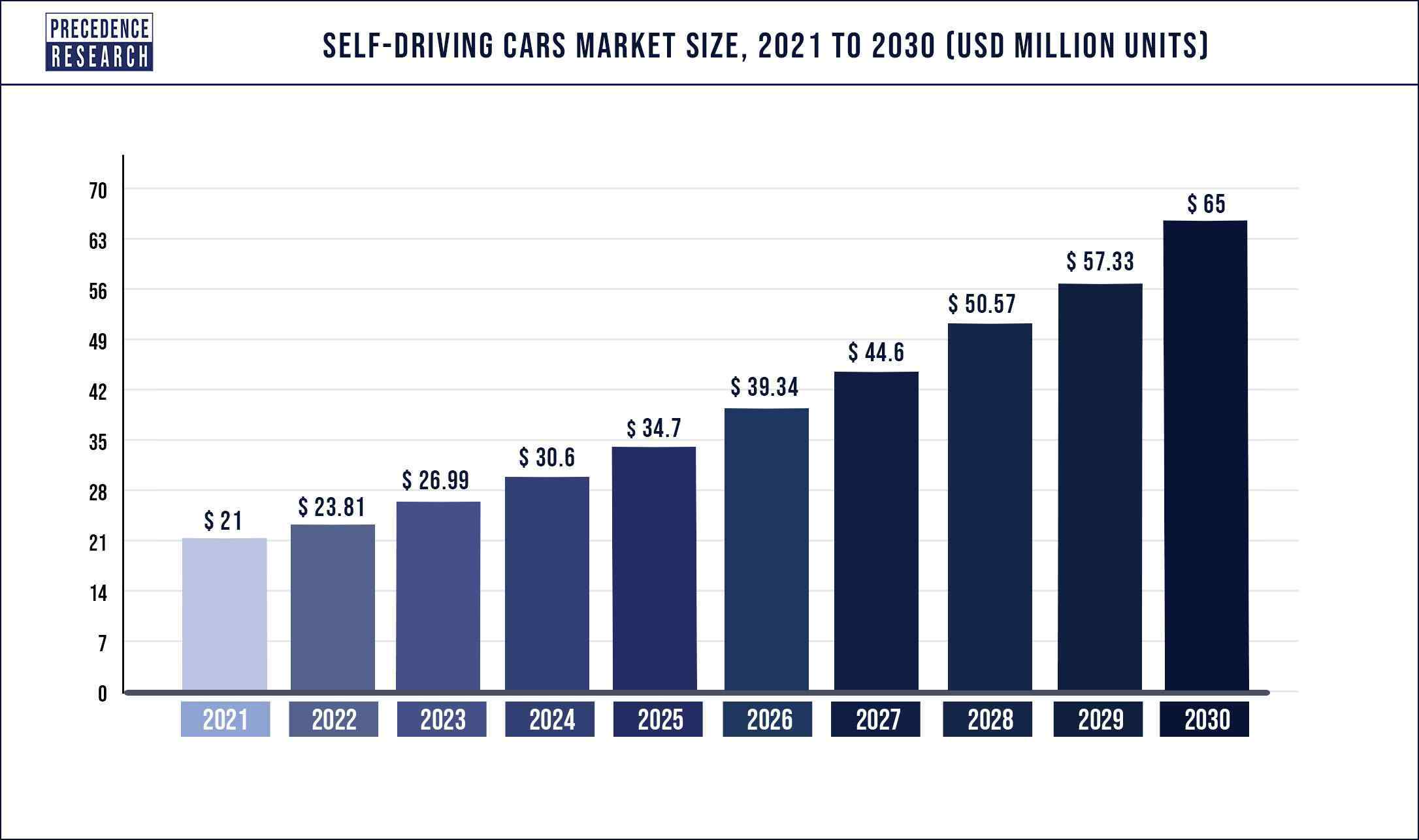 The self-driving cars are also known as autonomous vehicles which have a great potential for growth in the automobile sector. In order to carry out the operations automatically the self-driving cars are made up of numerous sensors. These sensors help the navigation process by performing situational analysis, trajectory control and motion planning. Due to the increased connectivity of these vehicles the threat of these cars getting hacked is increasing. Many organizations are developing anti hacking algorithms for the self-driving cars in order to prevent hacking. The developments of electric vehicle charging points would greatly affect the growth of autonomous vehicles as many autonomous vehicles are driven using the electrical power. Demand for luxury cars will further increase the demand for these self-driving cars during the forecast period. There has been a considerable growth in China and India, among others developing nations. The standard of living has also changed and improved in many developing countries due to a considerable increase in the spending power.

There was an increased use of personal transportation during pandemic. Increase in the fear of acquiring the disease and in order to follow the government restrictions there was a significant effect on the transportation and the mobility sector. There was a great amount of uncertainty in the market during the pandemic. This hampered the business growth. There was a growing panic among the consumers due to the increasing number of Hospitalized patients and that's occurring due to COVID 19. This fear increased the use of personal transport.

Safety features is the most important factor for automotive customers across the world. The compulsion imposed by the government regarding safety features of LDW, AEB, EBS and many others have forced the manufacturers to incorporate such facilities into the recent vehicles. These facilities prove to be the basic feature in the self driving vehicles which proves to be a driving factor for the company. This improves the driving experience and quality provided by the vehicle. Many different types of safety features have been developed in order to help the drivers and lower the number of accidents across the world. Major OEMs such as Honda and Toyota are launching vehicles with safety features like blind spot detection, forward collision warning, rear cross traffic, and automatic emergency braking as a standard in all its vehicles. Self-driving cars could play a important role in reducing this number of accidents and provide a safe and efficient driving experience for the customers. Active safety systems such as blind spot detection, automatic emergency braking are the technologies that are providing a boost to the self-driving cars market. Increasing demand for the luxury vehicles in developing and developed nations will further strengthen the demand for self-driving cars in the coming years. In developing countries such as China and India, among others the growth rate for the self-driving cars is more. German car brands like as BMW, Mercedes-Benz, and Audi dominate the global luxury automobiles market.

On the basis of the vehicle type, the passenger car segment is expected to have the largest market share during the forecast period. Due to the rapid urbanization across the developing nations and increase it to manned in the developed nations the passenger car segment is expected to grow during the forecast period. Higher demographic growth, improved standards of living and the increase in the purchasing power in the developing nations are the most important factors that are leading to high growth of this market. There's an increased production of cars across the globe in many developed as well as the developing nations due to a great demand for these self driven cars. Various organizations and governments or investing a great amount of percentage in the development of these technologically advanced vehicles which will help in enhancing the safety features in order to prevent accidents on the roads. Self driven cars are able to provide convenience and comfort which is helping in creating a high demand for the self driven cars in the market.

Apart from the passenger car segment the commercial car segment is also expected to have a good amount of share in the self driven cars market. The Ensemble consortium and Netherlands organization partnered with the European Union. This partnership is aiming for applied scientific research in order to implement a multi brand truck for the European highways which will help in improving the traffic capacity. These technologically advanced drugs will be able to reduce the carbon dioxide emissions in Europe. And the fuel consumption shall be less as compared to the other vehicles. 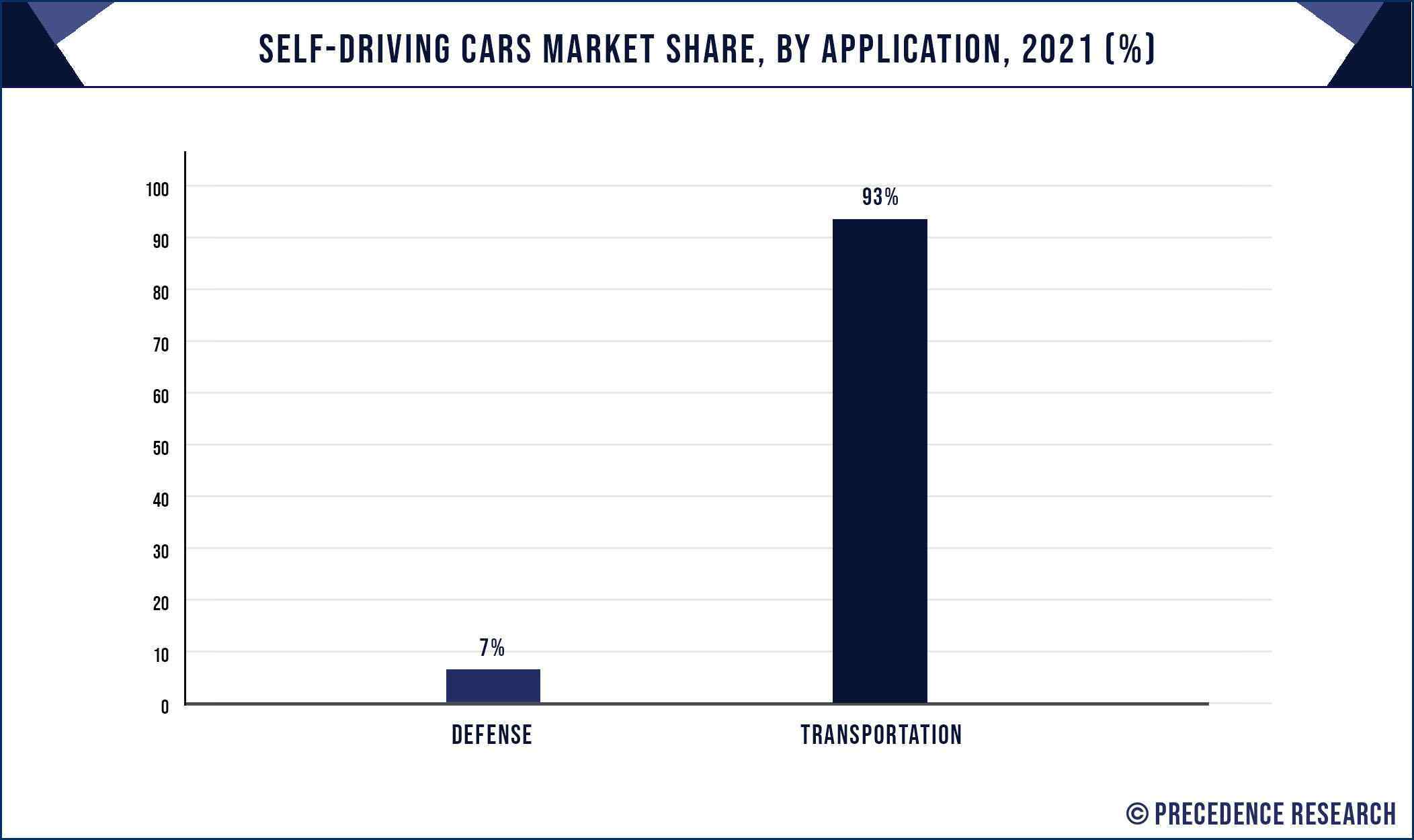 Apart from US the Europe is also expected to emerge as a lucrative market for self-driving cars. Due to an increasing preference from the consumers there is a growth in the market of self-driving cars which are technologically advanced products offered to this market.

The North America region had the largest market share till the recent years. The North American region accounted for a volume a share of about 45% till the year 2021. The growth of the self driving cars in this market is due to the amendments in the traffic regulations in the US. Due to these amendments there shall be an incorporation what is self driving cars on the public roads in the United states. In order to make transport completely autonomous this regulation is being adopted across all the states in the United states. Due to an increasing demand of the mobility as a service sector it is expected that the market shall grow well for the self driving cars in the future. The Department of Transport of UK had allowed the self driving vehicles on public roads without any additional permits or insurance. The UK government is also working on making changes to the current regulations in order to support the development of the self-driving cars in this market. 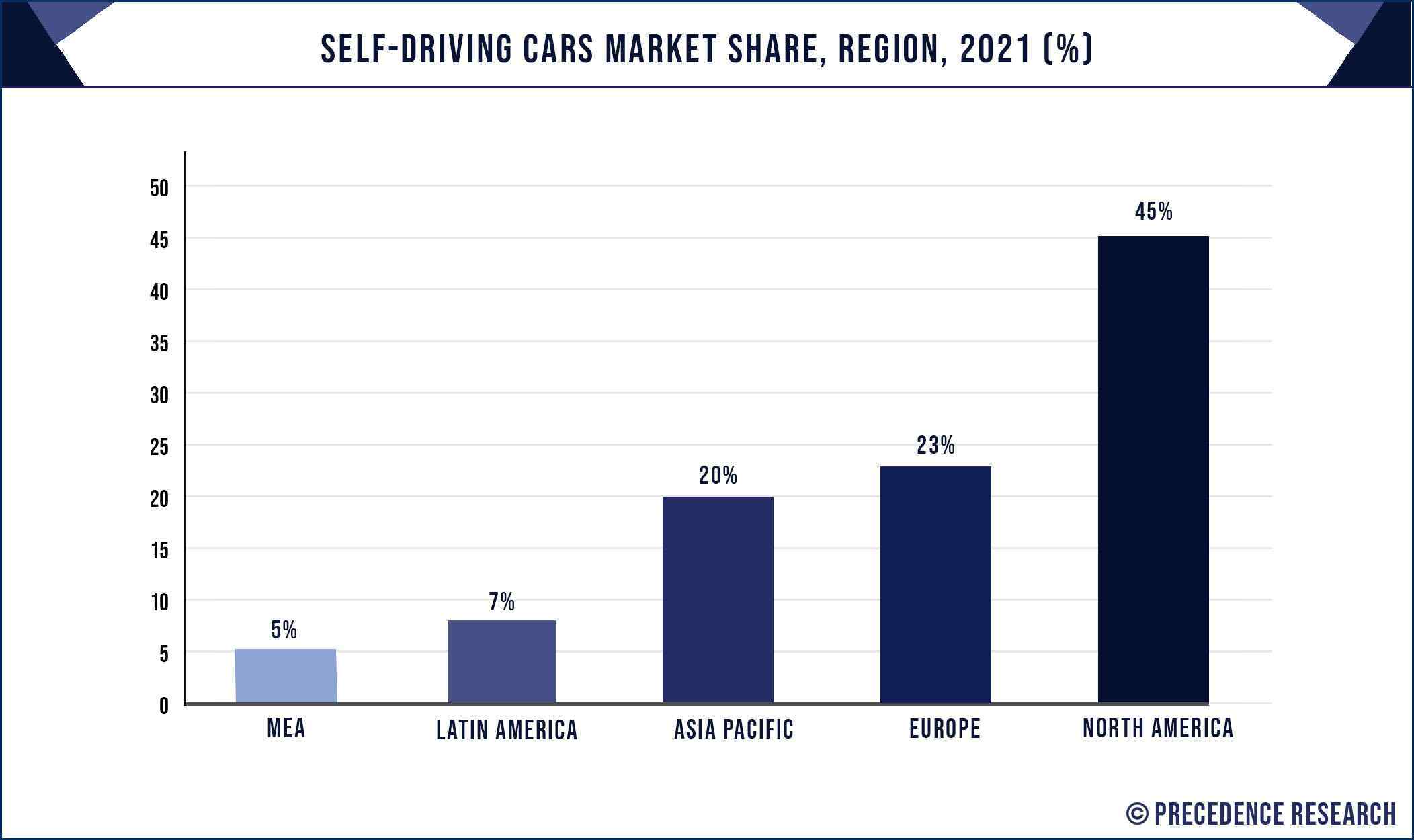 The market size in Asia Pacific region stood at USD 0.72 billion in the year 2020. There has been an increase in the adoption of electric vehicles and hybrid vehicles in United States. Due to a change in the traffic regulations in this region the market is expected to grow well during the forecast period. The European region has also seen a great demand for autonomous cars in the recent years. UK is determined to convert all the vehicles running on the roads of this region to the autonomous vehicles in the coming years. The autonomous car manufacturers are able to provide a good amount of variants in the cars due to the software and technology developers.

By Level of Autonomy