A driverless vehicle, also known as an autonomous vehicle, is a vehicle that can operate without the assistance of a human. It can carry out required functions by sensing and responding to external conditions and surroundings using superior and built-in programs.

The autonomous vehicle also known as self-driving cars have propelled significant shift in automation and connectivity. The internet, computers, smartphones, and other advanced technologies are being integrated into vehicles to help and automate driving operations. 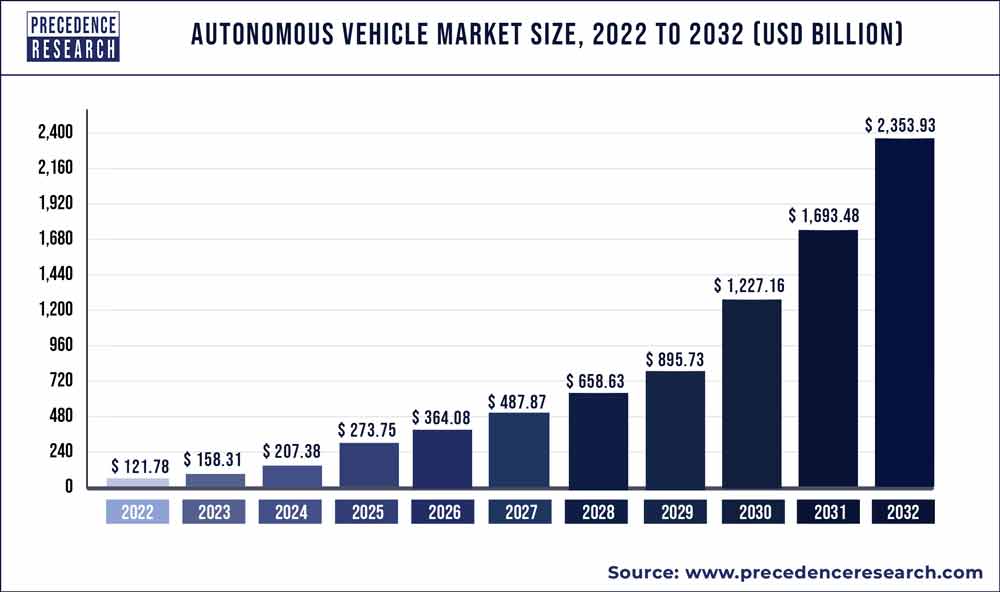 The government funding, supportive regulatory framework and investment in digital infrastructure are pretended to positively drive the demand for autonomous cars during the forecast period. In addition, it provides independent mobility for the person suffering from disability as well as for the non-drivers. They offer high-level of flexibility and comfort to rest, read, or even work while traveling that improves their efficiency. Further, rising technological advancement and diversity in the automotive industry has introduced autonomous cars. Autonomous vehicles are a breakthrough technology in the automotive industry after the introduction of electric and hybrid vehicles. Rising number of accidents because of human error has triggered the need for the autonomous technology to invade in the automobile sector.

Apart from the benefits, high cost of autonomous vehicle, rising concern for security & safety, and lack of proper infrastructure to support automated vehicles in the developing countries restrict the growth of the market. On the other hand, government initiatives to support electric and hybrid vehicles expected to propel the market for autonomous vehicles in the coming years.

Vehicle platoon comprises group of vehicles equipped with advanced technology, running together in a row from nose-to-tail at a high speed. A lead vehicle is followed by the other vehicle at a same speed and maneuvers to the lead the vehicle. Each vehicle communicates with lead vehicle, which controls

the speed and direction of the other vehicles. Additionally, vehicle platooning is a result of one the technological advancement in the automotive industry, which aims to enhance vehicle & passenger safety, improve fuel efficiency and decreases time travel. Numerous vehicle manufacturers and

Below mentioned are the benefits of vehicle platooning

With the changing landscape of how passengers commute on daily basis, the demand for an integrated mobility service platform which combines various modes of transportation such as public transit, private vehicle, and bikes, among others in a compact service package has increased in the recent years.

According to the United Nations, the total population living in urban areas is estimated to reach 68% by 2050 from 55% in 2018 and along with this rapidly rising urban population, the demand for sustainable transportation system which consumes less time, is affordable and reduces hassle is expected to grow

as well. As MaaS helps in decongestion of traffic, cost reduction, and efficient travel, the future of mobility services is expected to change rapidly. As the platform is flexible to integrate new modes or products without interfering with the existing service operations, integration of autonomous vehicle is

expected to be adopted on a commercial scale thereby increasing car-pooling services; reducing the use of privately-owned cars autonomous cars. As the Mobility-as-a-Service becomes sustainable in the future, it is expected reduce the travel costs such as fuel costs and toll cost by reducing traffic congestions.

Most of services for MaaS will be delivered by the robo-taxi or self-driving taxi, a Level 4 or Level 5 autonomous cars operated for on-demand mobility services such as ride haling and ride sharing. Additionally, autonomous driving technology providers such as Waymo, Uber, and Zoox, among others are spending a humongous amount in R&D to develop Level 4 or Level 5 robo-taxis. For instance, Uber invests $125 million to $200 million in a quarter for self-driving vehicle projects. Additionally, autonomous technology providers are collaborating with automotive OEMs and tier 1 component providers to develop advanced autonomous vehicles. For instance, in August 2018, Uber partnered with Toyota and as per the partnership agreement Toyota invested $500 million in Uber and both companies will work jointly for the development of self-driving cars. The combined self-driving technology will be integrated with Toyota Sienna minivans and will be deployed on Uber ride-hailing networks starting from 2021. All these factors are anticipated to create immense opportunities for the market growth.

The demand for luxury cars is on a rise, automotive OEMs such as Volvo, BMW, Audi, Mercedes- Benz, among others are developing luxury vehicles, which are level 1 and level 2 autonomous vehicles. In the recent years, the automotive sector has witnessed unprecedented growth in emerging economies such

as China, India, Vietnam, Malaysia, and Indonesia, which are also becoming major manufacturing hubs for global automotive players. In order to efficiently make use of rising consumer automobile preferences, leading global automotive OEMs are entering into new and emerging markets for business

expansion in terms of product launches, acquisitions/partnerships. For instance, BMW will launch X7, X4 in India in 2019. BMW X7 comprises ADAS features such as adaptive cruise control, lane departure warning, blind spot detection, and speed limit information, among others. This form of expansion will further strengthen the company’s position in emerging countries and enhance its market share.

Additionally, leading automotive OEMs are expanding their geographical footprint in emerging countries by increasing manufacturing capacity in an order to fulfil the gap between the demand and supply of the vehicles. For instance, in July 2018, BMW and its Chinese partner “Brilliance Automotive Group

Holdings” signed an agreement to expand their Chinese joint venture “BMW Brilliance Automotive”. This expansion will help the company to boost its production capacity to 520,000 cars in 2019. 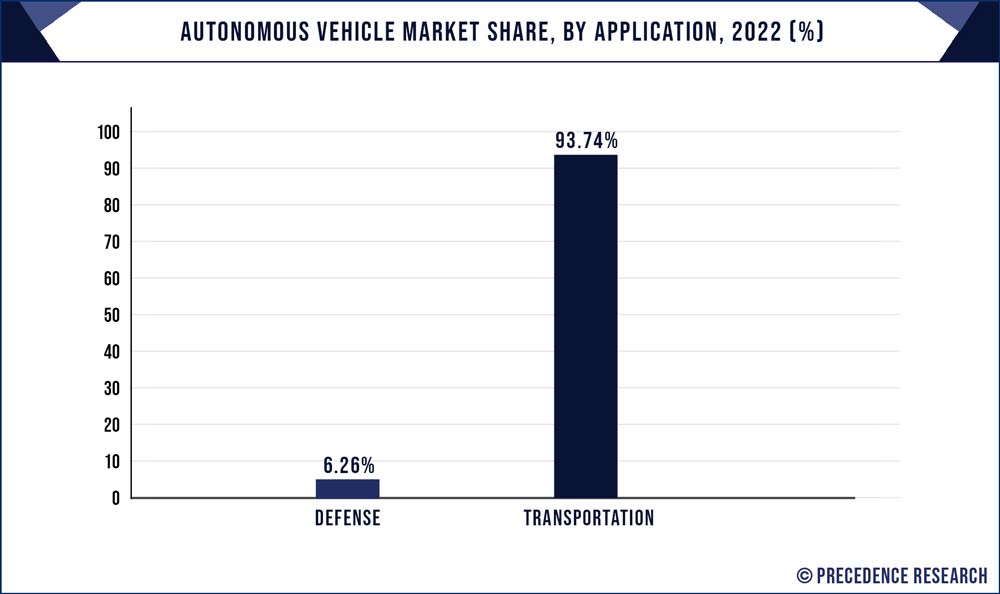 However, defense sector experience flourishing growth in the demand for autonomous vehicles and expected to emerge as one of the most prominent application during the forecast period owing to various initiatives across different regions such as North America. For instance, in April 2019, the U.S. military announced to deploy autonomous combat trucks to assist soldiers while driving to avoid accidents especially in rough terrain.

Surge in adoption of hybrid and electric vehicles in North America has projected the region as the global leader in the year 2020 and expected to witness explicit growth over the forecast period. This is attributed to the changes in traffic regulations in the U.S. that allow autonomous vehicles to operate on public roads. In order to make transportation fully autonomous, the government is taking initiatives for road infrastructure.

The prime factor supporting the accelerating growth of the region is amendments from government in the traffic regulations to support the autonomous mobility on public road. For example, in 2013, a traffic regulation institute in the U.S., the National Highway Traffic Safety Administration (NHTSA), allowed testing for self-driving cars in various states, including California, Nevada, Michigan, Florida, and Washington D.C. 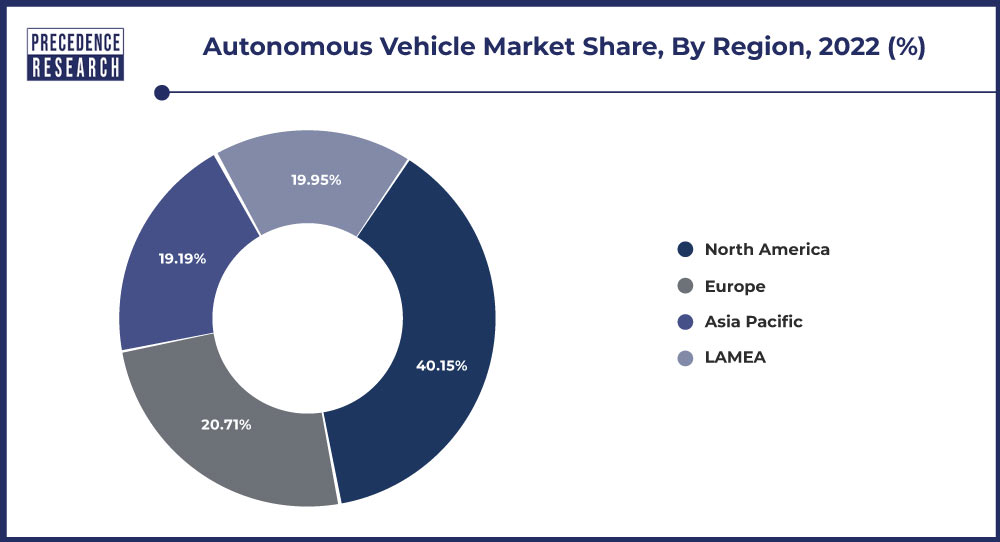 The global autonomous vehicle market is highly competitive and dominated by the presence of major automotive giants. Leading market players are significantly focused towards inorganic growth strategies such as collaboration, partnership, merger & acquisition, and regional expansion. In August 2017, Intel Corporation, BMW AG, Fiat Chrysler Automobiles (FCA), and Mobileye, affiliated business of Intel Corporation contracted a memo of understanding for Fiat Chrysler Automobiles to link companies for the development of autonomous vehicle driving platform. The memorandum aimed at collaborating capabilities, resources, and strengths of all the companies to reduce the product launch time, in addition, also enhances the development efficiency and platform technology.

Moreover, industry participants also invest significantly for the product development as autonomous vehicles require high-end electronic devices for advanced automotive features. Rapidly changing consumer preference and increasing awareness among the people for environment-friendly vehicles motivate the market players to incorporate such features in their vehicles. These market players tie up with the electronic hardware manufacturing companies to meet the consumer demand.

Some of the prominent players in the autonomous vehicle market include:

This research report includes complete assessment of the market with the help of extensive qualitative and quantitative insights, and projections regarding the market. This report offers breakdown of market into prospective and niche sectors. Further, this research study calculates market revenue and its growth trend at global, regional, and country from 2017 to 2030. This report includes market segmentation and its revenue estimation by classifying it on the basis of application, and region:

By Level of Automation

What is the current size of autonomous vehicle market?
According to Precedence Research, the autonomous vehicle market size was valued USD 94.43 billion in 2021 and is expected to hit around USD 1808.44 billion by 2030.
What will be the CAGR of global autonomous vehicle market?
The autonomous vehicle market is growing at a CAGR of 38.8% from 2022 to 2030.
Which factors drive the demand for autonomous cars market?
The government funding, supportive regulatory framework and investment in digital infrastructure are pretended to positively drive the demand for autonomous cars during the forecast period.
How much was the market share of transportation segment in autonomous cars market?
Among them transportation segment cover nearly 90% of the market value share in 2019 and anticipated to witness a proliferating growth over the analysis period.
Which region has projected as a global leader in the year 2021?
Surge in adoption of hybrid and electric vehicles in North America has projected the region as the global leader in the year 2020 and expected to witness explicit growth over the forecast period.
Which are the top key players operating in the autonomous cars market?
Some of the key players operating in the market are BMW AG, Audi AG, Ford Motor Company, Daimler AG, Google LLC, General Motors Company, Nissan Motor Company, Honda Motor Co., Ltd., Toyota Motor Corporation, Tesla, Volvo Car Corporation, Uber Technologies, Inc., and Volkswagen AG among others.