The global cocoa based polyphenols market size was estimated at USD 85 million in 2021 and is projected to worth around USD 145 million by 2030, growing at a compound annual growth rate (CAGR) of 6.11% during the forecast period 2022 to 2030. 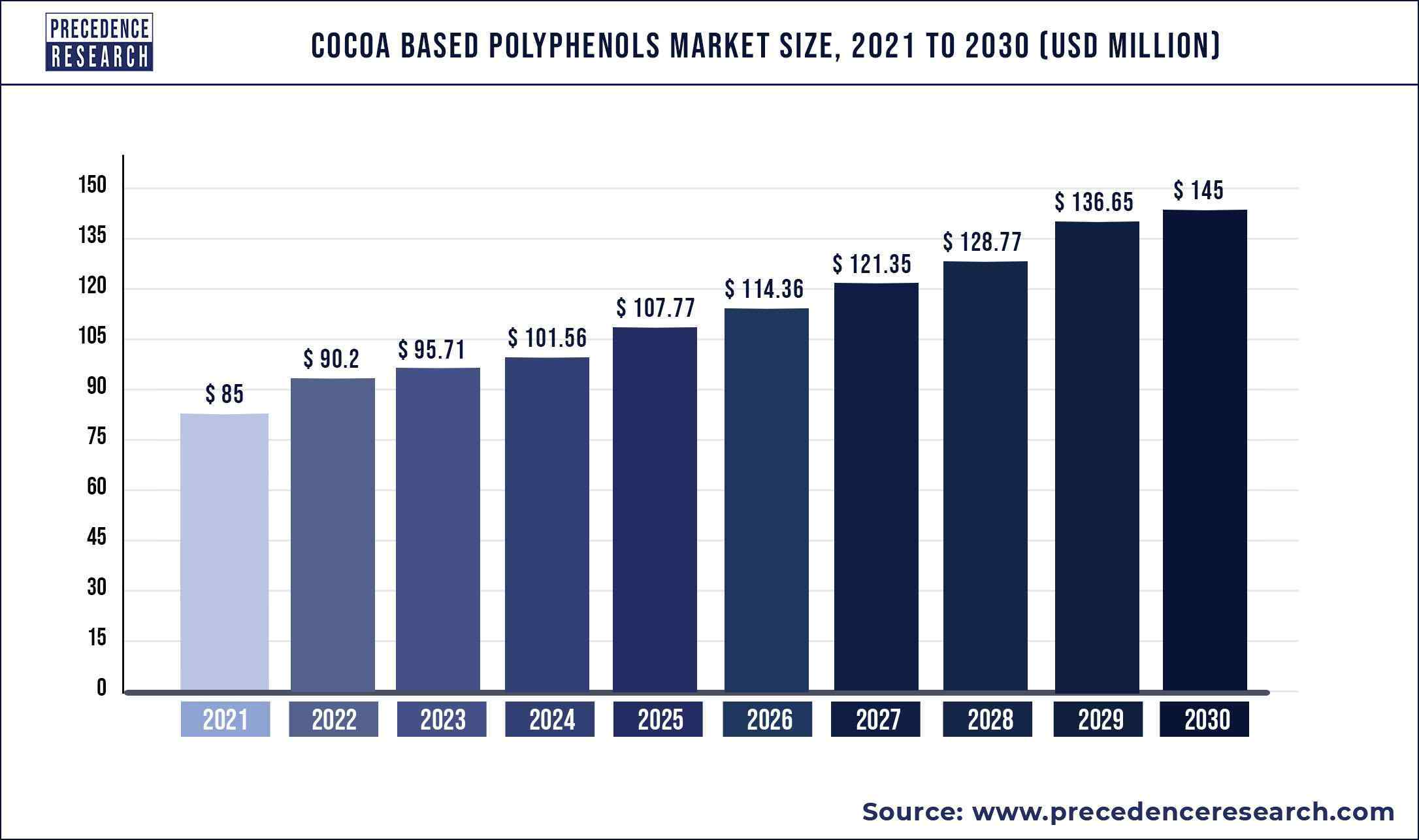 Polyphenols contain certain micronutrients or the phyto chemicals which have a prebiotic effect. Polyphenols have the antioxidant properties. The cocoa based polyphenols market is expected to grow during the forecast period due to the awareness about its health benefits among the customers. It has proven to be good for skin related issues. Polyphenols are also used extensively as they help in preventing many chronic diseases. The use of polyphenols is good for preventing the various cardiovascular diseases. It also helps in preventing diabetes as well as cancer.

Neurodegenerative conditions related to the geriatric population can also be prevented through this product. All these types of diseases are prevented by the consumption of polyphenols as they help in improving the number of good bacteria of the gut. It provides a better health and it is also extremely effective in weight management. Just like all other products the price of this product alters on the basis of the availability and the price of the raw materials used the manufacturers of cocoa based polyphenols need to seek approvals for the product as they should comply with the regulations relating to the health as well as the environment. In order to formulate all to manufacture their products they need approvals from the regulatory authorities.

During the pandemic as there was a growing concern regarding the immunity of the individuals as well as the well being the market for cocoa based polyphenols had grown. Consumers were seeking healthier options or healthier alternatives which would be effective in boosting their immunity. There was a growing demand for various types of functional beverages which would help in boosting the immunity of an individual. Pandemic has been an eye opener for consumers that previously consumed unhealthy products. There's a growing awareness regarding the healthier options available in the market and the demand for such options has grown after the pandemic. Continuous research and development in this field is able to offer better products in order to capture the market.

Cocoa based polyphenols are consumed in the form of supplements as a functional fool. These products are also used in different types of toiletries and dies. As these products are effective in preventing different geriatric illnesses especially the cardiovascular diseases and diabetes the market for this product is expected to grow in the coming years. It is also effective against high cholesterol and therefore there's a growing demand of this product in the food and beverages industry. The pharmaceutical industry is also expected to have a good demand for this product in the coming years period due to an increased use of cocoa based polyphenols in various supplements consumed by the people the market will grow well. The cool based polyphenols are extremely beneficial for the humans. It has proven its benefits over the years in many different ways. Polyphenols are also extremely useful in different types of inflammation.

Cocoa based polyphenols can be also used for coloring the food Peter they have a wild usage in the nutraceuticals market. The use of polyphenols as a functional beverage had a market of about 40% in the recent years. There's an increased consumption of these beverages in Japan in the form of various energy drinks. In the North American region and the Asia Pacific region there is a growing demand for cocoa based polyphenols in the form of supplements. The polyphenol content in cocoa beans it's about 84%. The oxidative stress may lead to the diseases like cancer as well as diabetes. And the antioxidants play a very important role in such cases. High amount of polyphenol content in cocoa beans will drive the market growth in the coming years. In order to improve the insulin conditions and to lower the blood pressure there is a growth in the consumption of these cocoa based polyphenols in the form of supplements.

Report Scope of the Cocoa Based Polyphenols Market

On the basis of application, the functional foods segment dominated the market in 2021. There is a growth in the number of different beverage companies that help in providing protection against the cardiovascular diseases which make use of cocoa based polyphenols in their products. As there is a growing demand for functional beverages across the globe in all the nations the market for the cocoa based polyphenols are expected to have a good growth in the coming years. In order to provide better nutrition and good health to the consumers major market players are manufacturing these functional beverages to capture the market. The profits earned by these companies are relatively high as compared to other beverages that are sold in the market or the other functional food products that are sold in this market. There is a growth in the number of companies or the growth in the number of new manufacturers of functional foods based on the use of cocoa based polyphenols due to the amount of margin offered by these products. 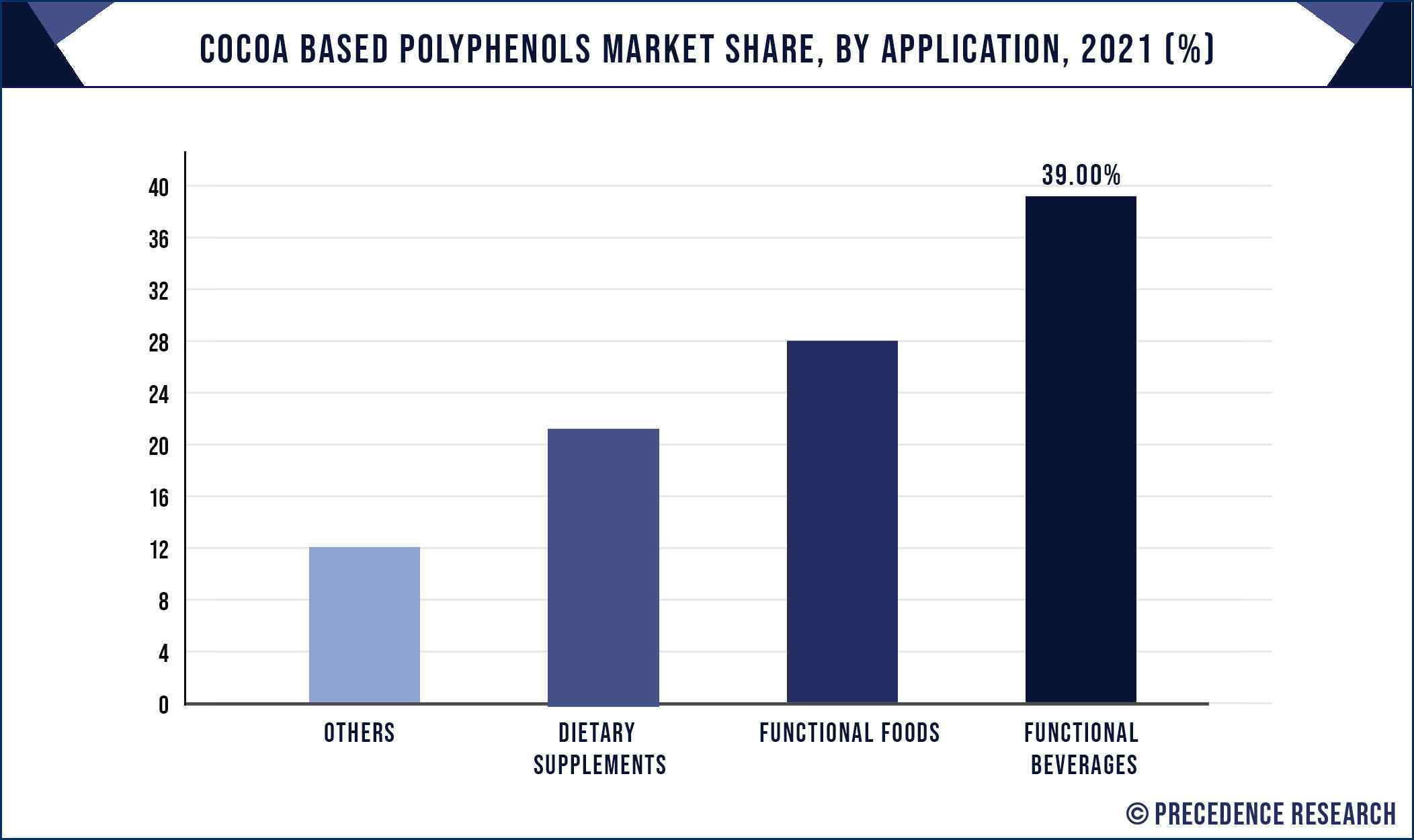 The cost of these functional foods happens to be more than that of the other conventional products by about 30%. Dual income households and increased purchasing power in the developing economies of the Asia Pacific region will drive the market growth period the Asia Pacific region and the South American region will provide great opportunities for the growth of the functional foods segment in the coming years. The manufacturing of these functional foods in this region will also lead to an increased amount of export to the other developed nations which will also help in increasing the market for cocoa based polyphenols. There is a growing awareness of the consumption of functional food among the consumers as they help in providing better immunity and many other health benefits like heart health better bowl health improved mental capacities and they also help in controlling the cholesterol. These functional foods may also be helpful in providing a better health for the eyes.

Rapid urbanization has increased the lifestyle issues among the population which have increased the number of diseases. The introduction of these functional foods will be helpful in preventing this population from many of the lifestyle disorders. As the functional food sector is regulated by the government authorities the market for cocoa based polyphenols is expected to grow in these regions. Government intervention has provided opportunities for growth in the market. The governments of various nations in the developing economies like China as well as Brazil have a good regulatory framework which happens to be a very important reason for promoting the use of functional foods.

Apart from Brazil and China India also has similar regulations which will drive the market growth in the coming years. Various rules and regulations associated with the agriculture in the rural economies will also lead to a growth of this segment. Constant research and development which has been helpful in providing better technology for improving the product quality or for the adoption of product by a large scale of people has also been an important reason for the growth of the market. The bitter taste or a taste which happens to be unpleasant due to the content of omega-3 fatty acids I've been covered by the use of other ingredients that make it better. Constant research has provided many other ingredients which will be helpful in covering the taste of amino acids due to which the market is expected to grow.

Apart from the consumption of cocoa based polyphenols in the form of functional food its dietary supplement segment will also grow well during the forecast period. There has been an increased awareness regarding the availability of dietary supplements and its health benefits for the humans which will drive the market growth in the coming years. In order to have natural solutions for treating various health related issues they shall be a growing demand for dietary supplements. This happens to be your healthy option due to the content of various natural products. In order to treat the gastrointestinal conditions, there is a growing demand for these supplements.

On the basis of geography, the Asia Pacific region has shown an excellent result in the coca based polyphenols and has recorded the largest income in the past few years. This is the result of the increasing demand in the market for food products made from plants and vegetables sources. The health benefits that are obtained from these products is tremendous and the increasing awareness among the masses is further helping the market to cope up with the demands. This is a major factor that supports the market growth during the forecast period. 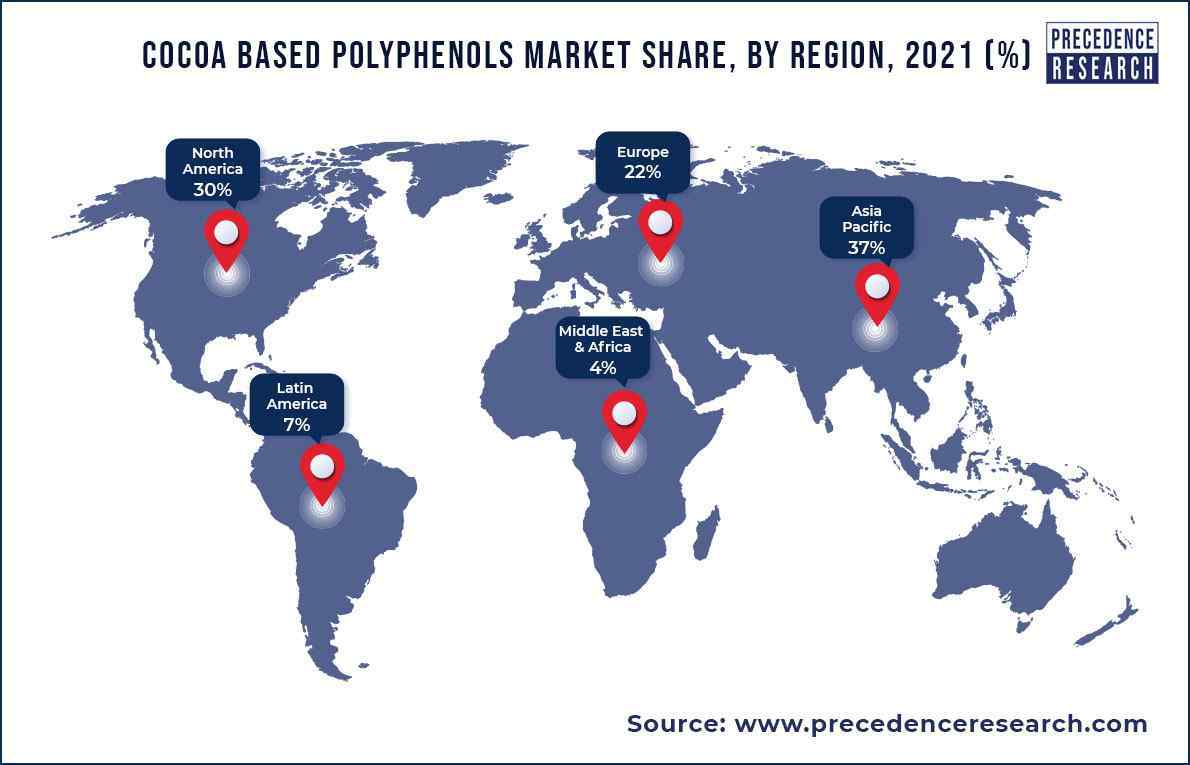 The European nations are showing an increasing inclination toward the functional food products and beverages as a result of the rapid urbanization and busy lifestyle adopted by the people. This proves to be a great opportunity for the local and big players in the market. The rapidly increasing awareness regarding health care patterns and health problems has helped the market to capture the interest of the younger as well as the older generations comfortably. The South and Central American market has also shown a considerable growth during the forecast period.

Chocolate giant CasaLuker has developed a method to make cocoa powder with a high polyphenol content that can be used in cocoa-based food. It will prove to be healthier and more profitable as compared to the other traditional methods available in the market.