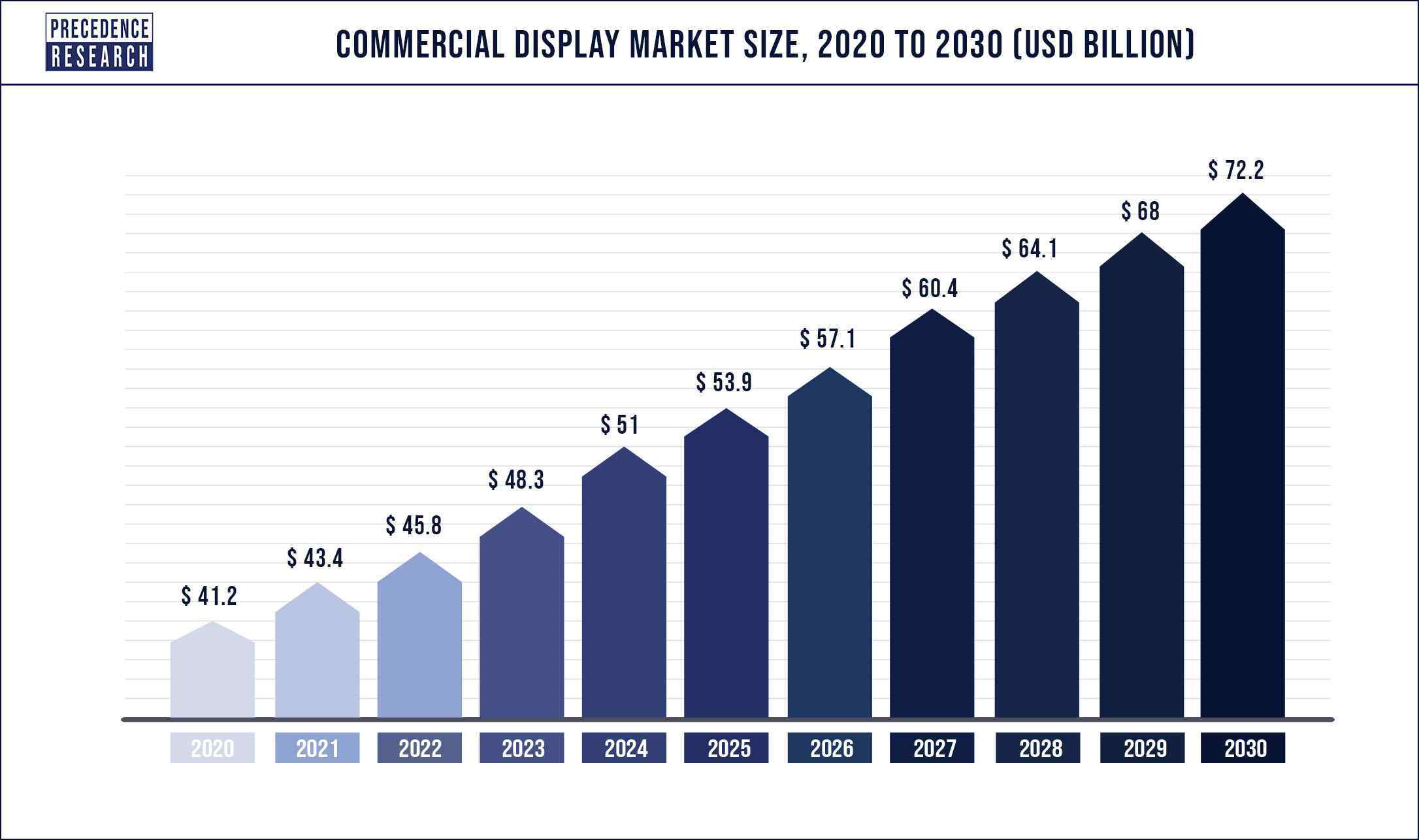 Further, the increasing demand for the commercial displays across wide range of sectors such as retail, entertainment, hospitality, corporate, banking, and education is driving the growth of the commercial display market. Technological advancements in the development of software in order to increase target audience engagement tracking and engagement, and management of content has fostered the market growth.

Based on the product, the digital signage segment accounted largest revenue share in 2020 and is expected to remain its dominance in near future. This is attributed to the increased adoption of digital signage in the retail sector like supermarkets and shopping malls across the globe. The rising number of commercial complexes like shopping malls and rising penetration of supermarkets in the developing regions is expected to further drive the growth of this segment. The segment is also estimated to be the fastest-growing segment during the forecast period. The rising adoption of the micro and mini-LED in the commercial grade TVs is expected to drive the growth of this segment in the forthcoming years.

Based on the display type, the flat panel segment dominated the global commercial display market in 2020, in terms of revenue. This is due to the extensive utilization of the flat panels by the end-use sectors in the past years. Moreover, low cost and easy availability are the major factors that resulted in the huge adoption of this panel. The immense popularity of the digital posters, video walls, TVs and monitors has significantly contributed towards the growth of this segment in the past.

On the other hand, curved panel is estimated to be the most opportunistic segment during the forecast period. Curved panels are now being widely adopted in the TVs, monitors, and smartphones. The increasing adoption of curved panels across the various end-use sectors is expected to drive the growth of this segment in the upcoming years.

Based on the component, the hardware segment dominated the global commercial display market in 2020, in terms of revenue and is estimated to sustain its dominance during the forecast period. This is due to the availability of high cost hardware and wider range of hardware components such as displays, cables, accessories, and other equipment.

On the other hand, the software is estimated to be the fastest-growing segment during the forecast period. This is mainly due to the rising technological advancements and upgradations in the software in order to develop effective software that can efficiently manage contents in the commercial displays.

Based on the technology, the LCD segment accounted highest revenue share in 2020. The LCD has been widely accepted technology across the globe in the past few decades, which led to its dominance in the market. The banking and corporate sectors extensively uses the LCD technologies. Further, the low cost of production associated with the LCDs is a significant driver of the segment.

On the other hand, the LED segment is expected to be the fastest-growing segment during the forecast period. This can be attributed to the technological advancements and rising popularity of the QLEDs and OLEDs is fueling the growth of the segment. These LED technologies are known for its energy efficiency. Moreover, the emergence of micro and mini-LED is expected to further drive the market in the foreseeable future.

Based on the application, the retail segment hit largest market share in 2020. This can be attributed to the increased adoption of the commercial displays in the retail sectors like shopping malls, supermarkets, and hypermarkets. The huge number of footfall in the shopping malls and other retail units makes it a huge segment for the application of the commercial displays.

On the other hand, the hospitality is estimated to be the most opportunistic segment during the forecast period. This is attributed to the rising penetration of quick service restaurants, motels, bars, and cafes across the globe. The restaurants, cafes, and bars requires huge number of display units to display their offers and menus. Hence, the rising number of such foodservice units is boosting the growth of this segment.

Based on region, North America dominated the global commercial display market in 2020, in terms of revenue and is estimated to sustain its dominance during the forecast period. North America is characterized by the increased penetration of supermarkets/hypermarket, hotels, restaurants, shopping malls, and other commercial units that has significantly contributed towards the growth of the global commercial display market. Further, increased adoption rate of the digital technologies for the advertisement and promotional activities of products and service in North America has led towards the dominance of this region in the global market.

Asia Pacific is estimated to be the most opportunistic segment during the forecast period. The rapid industrialization and rapid urbanization coupled with the rising penetration of numerous commercial units in the region is expected to boost the adoption of the commercial displays in the region in the forthcoming years.

Some of the prominent players in the global commercial display market include: