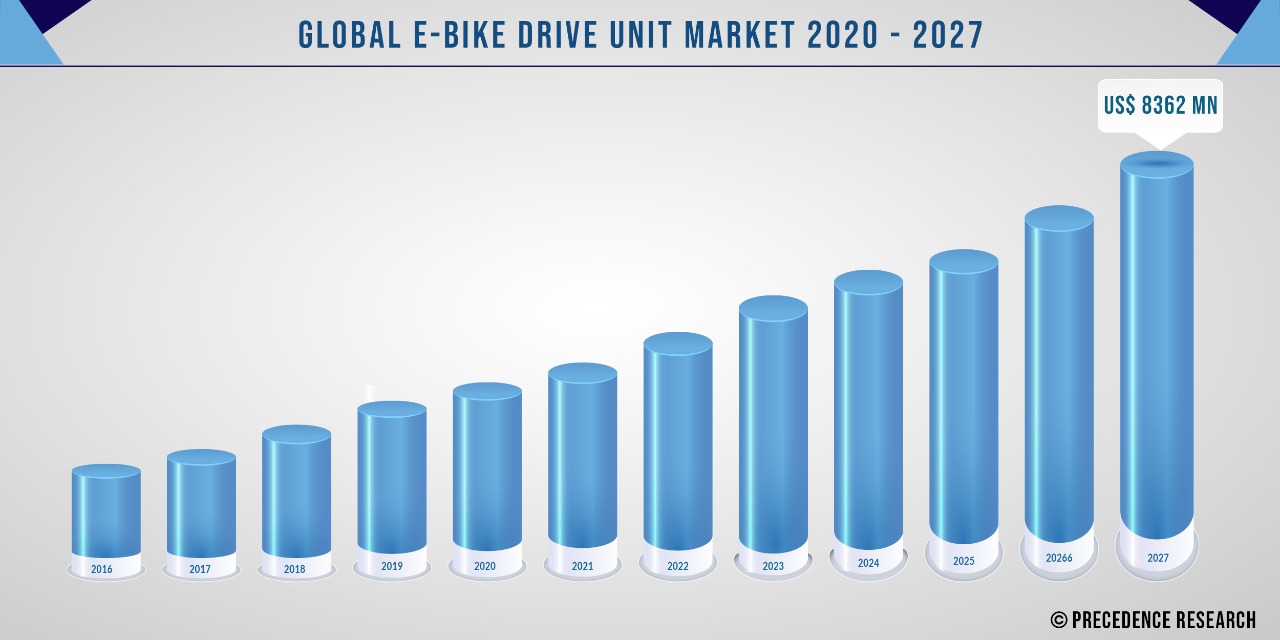 Cumulative urbanization along with a need for alternative mode of transportation for cars are generating fascinating opportunities for the e-bike sector. Besides, light weight, and low-cost benefits in comparison with electric cars are suggestively driving the market growth for e-bikes and thus e-bike drive units. Foremost market manufacturers for e-bike drive units are continually focusing towards the product innovation and development to reduce the overall weight and cost of the drive system that improves the performance of e-bike as well as make it cost-effective for consumers. Drive unit is the most indispensable component of an e-bike that holds noteworthy importance in the performance of bicycle. Hence, the market growth of drive unit is mainly governed by the e-bike sale and its growth prospects. Cumulative concern about environmental protection has triggered the battery research that extensively drives the electric mobility across the globe. Among other electric vehicles, electric bicycles (e-bikes) sustained to be the highest selling vehicles across the globe since past decade with a registered sale of more than 30 Million in the year 2016. Improvement in the lithium ion battery technology has resulted in lighter and cost-effective e-bikes further aids to the increasing demand for e-bikes.

With snowballing necessity of environment-friendly transportation, popularity of bicycles is booming across numerous parts of the globe. This is mostly because of numerous benefits offered by the cycling such as decreases CO2 emission, reduced noise pollution from other transportation modes, reduces air pollution, saves fuel cost, advances public health, less congestion on roads, and also saves construction and maintenance cost of road infrastructure. 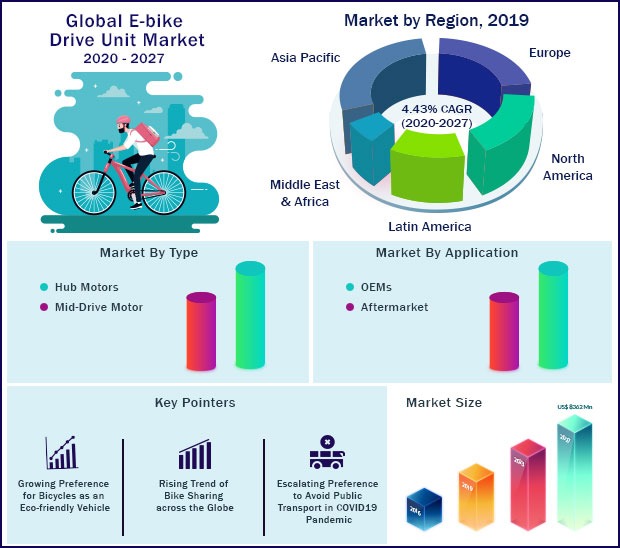 Original Equipment Manufacturers (OEMs) conquered the overall market with around 90% share in terms of revenue in 2019 and predictable to grow at the uppermost CAGR during the prediction period. As the e-bike is an innovative and emerging market in the bicycle sector, the OEM occupy major portion of the global e-bike drive unit market revenue. OEMs in the sector include major automotive parts manufacturers that have renowned brand name and recognition across the globe such as Giant Bicycle, Robert Bosch GmbH, Yamaha Motor Corporation, Panasonic Industries, Continental AG, Shimano, and many others. Further, the rate of competition among these companies very high as they all invest suggestively on the product innovation and development.

Asia Pacific accounted for foremost portion of revenue and consumption share of more than 90% in the year 2019. Substantial production of e-bikes in China is the major factor that fuels the market growth in the region. China alone subsidizes nearly 90% of the global production of e-bikes and this trend expected to endure over the forthcoming years. Large consumer base and early adoption of the technology in the region are the key influences contributing towards the attractive growth of the region. Apart from China, other Asian nations such as Japan, India, South Korea, Taiwan, and many others are also anticipated to exhibit promising growth for e-bikes and its components over the estimate period.

Europe is the other key region that follows China in terms of e-bike production and exhibit attractive growth for its implementation over the upcoming years. Snowballing trend for shared e-bikes in Spain, Germany, Belgium, the Netherlands, and many other nations in EU-27 predicted to be the key aspect that spurs the growth of this region. Furthermore, increasing public awareness along with snowballing penetration of e-bike drive unit manufacturers in the region again uplifts the overall market demand. Besides, North America displays stable growth in the e-bike drive unit market with significant adoption of the technology in the region.

E-mobility is the future of the transportation and propulsion system is the heart of each electric-powered vehicle. Hence, to found a strong footmark in the global e-bike drive unit market, manufacturers have implemented various marketing, pricing and other strategies to generate the product differentiation and gain significant foothold in the market. Certain noteworthy players competing in the E-bike Drive Unit market include:

This research report includes complete assessment of the market with the help of extensive qualitative and quantitative insights, and projections regarding the market. This report offers breakdown of market into prospective and niche sectors. Further, this research study calculates market revenue and its growth trend at global, regional, and country from 2016 to 2027. This report includes market segmentation and its revenue estimation by classifying it on the basis of product, application and region as follows:

What is the current size of the global e-bike drive unit market?
The global E-bike drive unit market size was valued at US$ 6,199 million in 2019 and predicted to reach over US$ 8,361 million by 2027.
How much is the CAGR of e-bike drive unit market in forecast period 2020 to 2027?
The global E-bike drive unit market is expected to grow at a registered CAGR of around 4.43% during forecast period 2020 to 2027.
Which segment accounted for the largest e-bike drive unit market share?
Hub motors capture major revenue share of almost 70% in the year 2019. Hub motors are simple in construction, lighter in weight, and inexpensive to the manufacturers due to which it is the most commonly found motors in the e-bike. However, significant number of advantages offered by the mid-drive motors over hub motors expected to drive their demand overt the forthcoming years.
How much is the Asia Pacific revenue share in the e-bike drive unit market in 2019?
Asia Pacific garnered major portion of revenue and consumption share of more than 90% in the year 2019. Noteworthy production of e-bikes in China is the major factor that drives the market growth in the region.
Which application segment conquered the overall e-bike drive unit market in 2019?
Original Equipment Manufacturers (OEMs) conquered the overall market with around 90% share in terms of revenue in 2019 and predictable to grow at the uppermost CAGR during the prediction period.
Which key players are operating in the e-bike drive unit market?
The key players operating in the e-bike drive unit market are Robert Bosch GmbH, Continental AG, Yamaha Motor Corporation, Panasonic, Shimano, MAHLE GmbH, Giant Bicycles, Bafang Electric (Suzhou) Co., Ltd, Brose Fahrzeugteile SE & Co. KG, Other.
Which factors driving the e-bike drive unit market growth?
Vehicle electrification is one of the greatest developments in the automotive power drives sector. Cumulative concern about environmental protection has prompted the battery research that extensively drives the electric mobility across the globe. In spite of the intensifying growth of e-bike, there are still some gaps and challenges in terms of technology in the existing e-bikes that holds back its growth. Battery maintenance is the major concern in e-bikes due to its limited life span of around 2-3 years particularly for lithium ion batteries. Though, the research in continued for the advancement in lithium ion battery, yet the problem is not been fixed. Apart from battery, motor maintenance is the other foremost concern that holds back the full growth of e-bike, hence affects undesirably