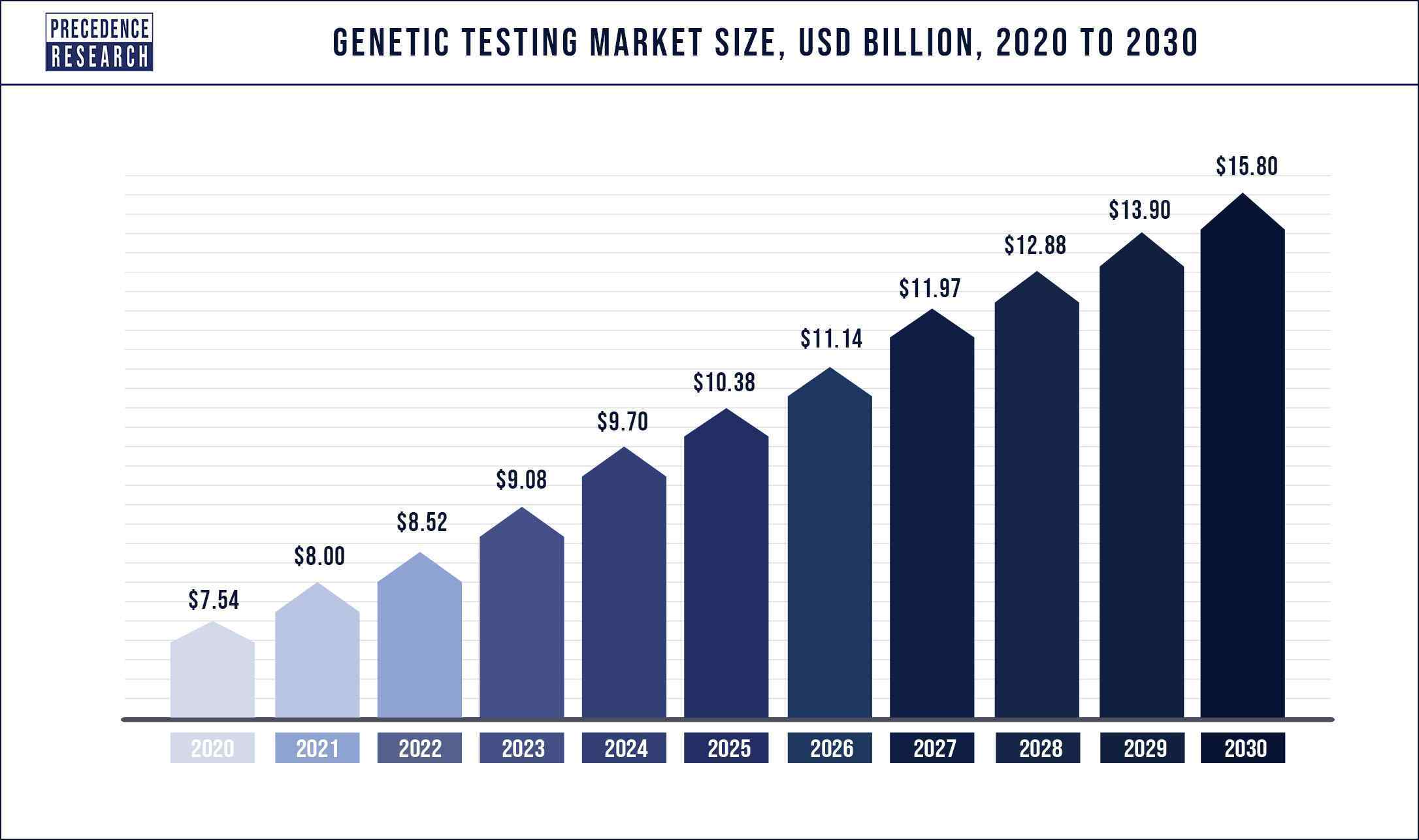 The global genetic testing market is primarily driven by the rising prevalence of chronic and genetic diseases and the introduction of innovative testing kits owing to the technological advancements. The rising consumer awareness regarding the availability of advanced diagnostic tests is fueling the demand for the genetic testing. Moreover, growing geriatric population is expected to propel the market growth in the upcoming future. According to the United Nations, there were around 382 million old age people, aged 60 years or above, across the globe in 2017 ad this number is expected 2.1 billion by 2050. The old age people are prone to various chronic diseases, which can foster the demand for the genetic testing across the globe. The increased disposable income, rising consumer expenditure on healthcare, technological advancements, and easy availability of genetic testing services are the major factors that drive the growth of the genetic testing market across the globe.

The rising government initiatives to spread the awareness regarding the genetic testing are spurring the adoption of the genetic testing among the global population. Moreover, the presence of numerous top market players and their heavy investments in the research & development activities has encouraged innovation in the product design, improved distribution, and enhanced quality of the products. The growing popularity of the direct-to-consumer genetic testing kit has increased the adoption of the genetic testing kits among the population owing to its affordable costs, which is expected to boost the growth of the global genetic testing market. Moreover, the growing penetration of online websites like Ancestry.com and 23andme.com are popular for providing DNA testing kits to the consumers through home delivery. The ease and convenience associated with the self-testing kits is boosting the participation of people in the self-testing websites. Furthermore, the rising marketing activities adopted by the online websites has significantly played their part in spreading awareness regarding the genetic testing. For instance, Ancestry.com invested around US$ 109.0 million on TV ads in US, in 2016. These advertisements had played a crucial role in the development of the genetic testing market.

The factors that drive growth of the genetic testing market include increase in incidences of genetic disorders and cancers and rise in awareness & acceptance of personalized medicines. In addition, advancements in genetic testing techniques are expected to boost the market growth during the forecast period. However, standardization concerns of genetic testing-based diagnostics and stringent regulatory requirements for product approvals hamper the market growth. Conversely, untapped emerging markets in developing countries are expected to provide remunerative opportunities for the market players.

Increase in incidences of genetic disorders and cancer Recently, increase in incidences of cancer and genetic conditions has been witnessed globally. According to the American Cancer Society, almost 1.8 million new cancers were diagnosed in 2020, with 606,520 cancer deaths in the U.S. Cancer is the second highest death-causing disease worldwide. Many types of cancers are inherited from generation to generation due to genes. Thus, genetic testing is widely applicable to study this pattern for prevention, treatment, and drug discovery. In addition, cytogenetics aid in the study of chromosomes to provide a better knowledge of cancers such as breast cancer.

Personalized medicine is based on the principle that each patient is different and requires individualistic drug treatment. Large-scale drug discovery is essential to increase the feasibility and practicality of personalized medicines for detection of diseases and disorders. Genetic testing has been widely used in pharmacogenomics, also referred as drug-gene testing. It helps in accelerating drug discovery and development. Moreover, researchers are aware that customized disease treatments are seemingly possible through various genetic testing techniques such as cytogenetic testing (fluorescence in situ hybridization, microarray, and others), biochemical testing, molecular testing, and DNA sequencing. Moreover, requests of patienst to primary care

physicians for genetic testing is anticipated to rise, especially from healthy adults seeking for early detection or prevention of genetic disorders. This trend is anticipated to boost the market growth during the forecast period.

Technological advancements in genetic testing include development of next-generation sequencing and chromosomal microarray analysis, which transforms the method of determination of structural and numerical abnormalities in chromosomes and, in turn, lead to detection of various rare genomic and genetic disorders. Technologies also contribute toward development of non-invasive cffDNA (cell-free fetal DNA) for identifying sub-chromosomal abnormalities, single-gene disorders, and chromosomal aneuploidy. Further, these technologies contribute toward development of carrier screens that allow simultaneous detection of various genetic disorders.

Moreover, in September 2019, Roche launched a blood-based genomic profiling test, FoundationOne Liquid. This test can detect 70 most common mutated genes in solid tumors and microsatellite instability. In addition, in May 2020, Myriad Genetics, Inc. announced that the U.S. Food and Drug Administration (FDA) has approved BRACAnalysis CDx for use as a companion diagnostic test by healthcare professionals to identify patients with metastatic pancreatic cancer, who have a germline BRCA mutation and are candidates for treatment with PARP (poly ADP ribose polymerase) inhibitor Lynparza (olaparib). These advancements in genetic testing products by major key players are projected to serve as growth factors for the cytogenetic market during the forecast period.

Healthcare systems in developing countries such as Brazil, India, and China have experienced significant increase in investments in healthcare and infrastructure. In addition, emerging nations need to focus on costeffectiveness and scalability to cater to the needs of rising patient pool. In January 2017, the World Economic Forum in its project paper, Health Systems Advancing in Emerging Economies, stated that one-third of the global health expenditure would be focused on provision of healthcare services in emerging markets by 2023.

The need for genetic testing has increased in the scientific communities throughout the world, owing to rise in awareness of genetic disorders in developing economies. Ease and applicability of genetic testing methodologies have gradually benefitted R&D activities in Asia and other developing regions of the world.

Similarly, different genome-based projects in these regions, such as the China Genome, have stimulated the market growth.

Large population base, decrease in costs of genetic testing techniques, and rise in awareness about genetic disorders in Asia-Pacific are expected to provide numerous growth opportunities to the market players during the forecast period. For instance, in May 2020, Takara Bio USA, Inc. announced completion of a new GMP (Good Manufacturing Practice) facility for manufacturing gene and cell therapy products in Shiga, Japan.

Based on the test type, the diagnostic testing segment dominated the global genetic testing market in 2020, in terms of revenue and is estimated to sustain its dominance during the forecast period. This is simply attributed to the increased prevalence of various chronic diseases among the global population. According to a study, around 60% of the US population suffers from at least one chronic disease. Moreover, rapidly growing old age population and the increased demand for the diagnostic testing among them has fueled the segment’s growth in the past few years. 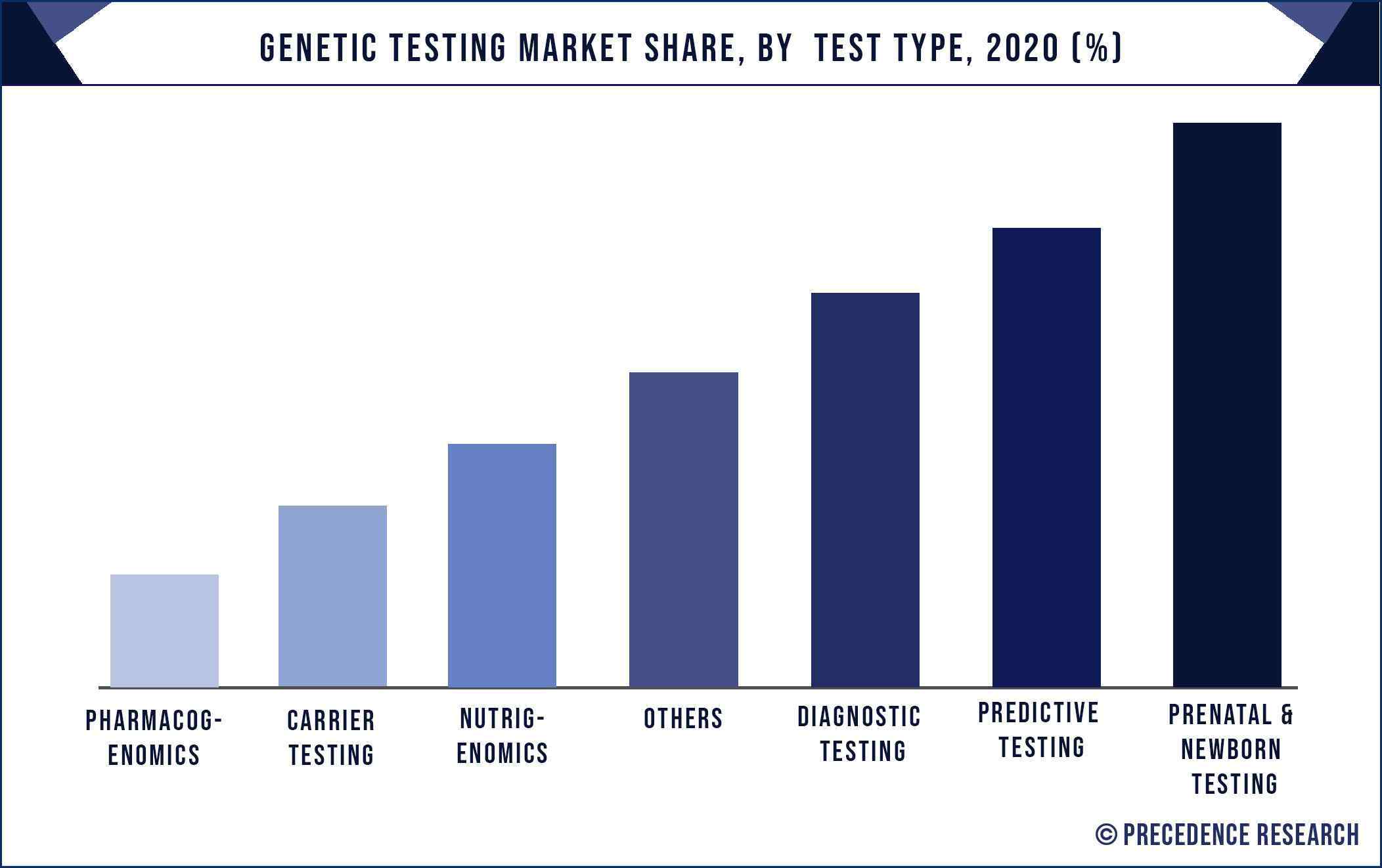 On the other hand, the prenatal & newborn testing is expected to show highest growth rate during the forecast period. This is due to the increasing prenatal and newborn testing and screening in the developed regions like North America and Europe. The prenatal testing is conducted during the pregnancy to detect any birth defect in the new born babies. These are non-invasive tests. Prenatal and new born screening helps to determine abnormality or syndromes in babies, which is expected to boost the growth of this segment during the forthcoming years.

Based on the test type, the cancer segment dominated the global genetic testing market in 2020, in terms of revenue and is estimated to sustain its dominance during the forecast period. This is simply attributed to the increased prevalence of cancer among the global population. The increased prevalence of various cancer such as breast cancer, lungs cancer, bowel cancer, and womb cancer are the major drivers of this segment.

Based on region, North America dominated the global genetic testing market in 2020, in terms of revenue and is estimated to sustain its dominance during the forecast period. This can be attributed to the increased consumer awareness regarding the benefits of genetic testing among the population. Moreover, the easy availability of self-testing kits through online websites in the nation like US has boosted the adoption of the genetic testing kits among the population. Moreover, the increased prevalence of various chronic diseases among the majority of the population coupled with increased consumer expenditure on healthcare has exponentially boosted the market growth. The rising number of geriatric people in US is expected to drive the market in the forthcoming years. Furthermore, the rising popularity and adoption of personalized medicines among the population is expected to foster the market growth. 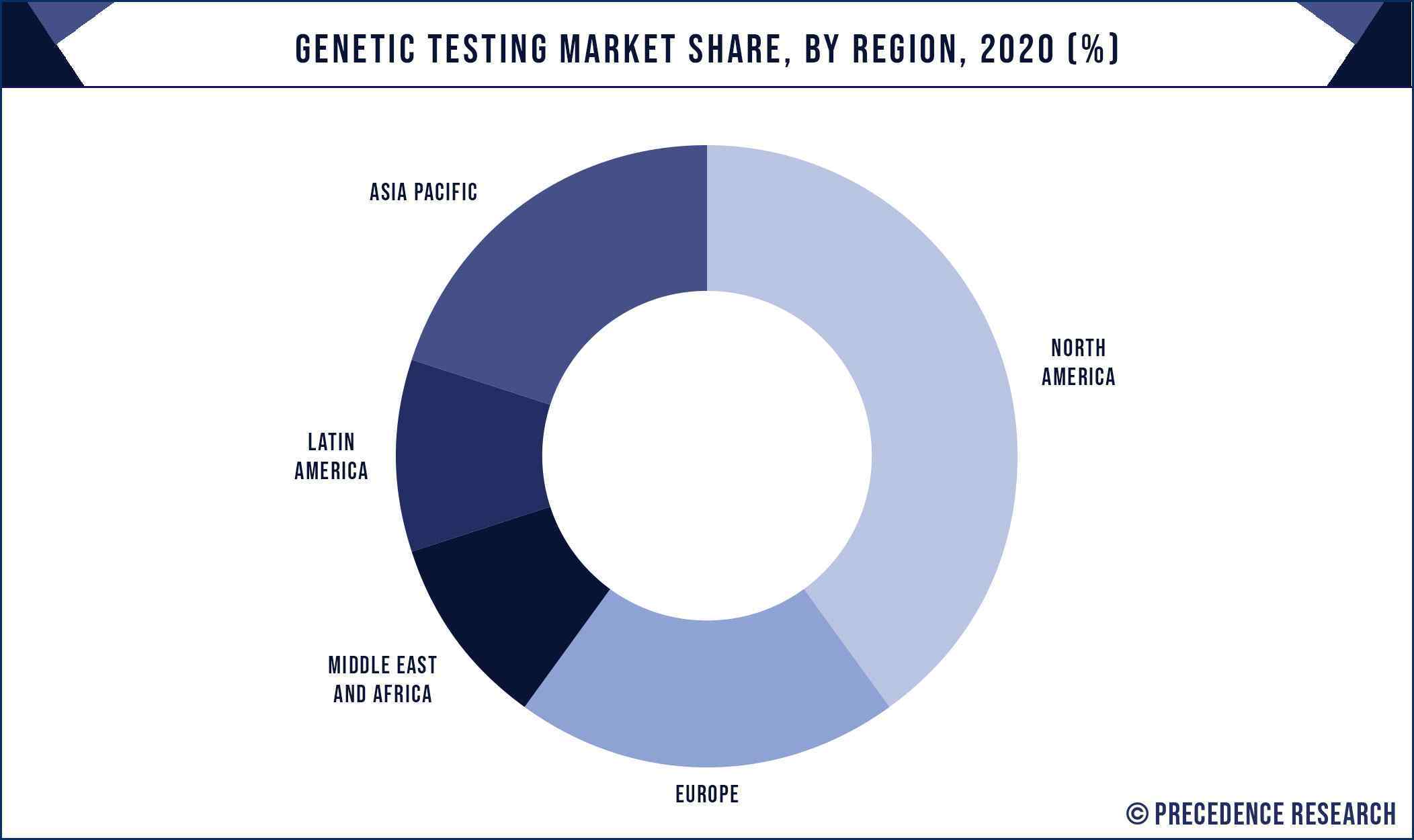 On the other hand, the Asia Pacific is estimated to be the most opportunistic market during the forecast period. Asia Pacific is characterized by the presence of huge population, rising prevalence of chronic diseases, and growing awareness regarding the genetic testing. The increasing disposable income and rising healthcare expenditure is further expected to drive the growth of the market.

In August 2020, Guardant Health acquired the approval from FDA for its Guardant 360 CDx.

Some of the prominent players in the global genetic testing market include: