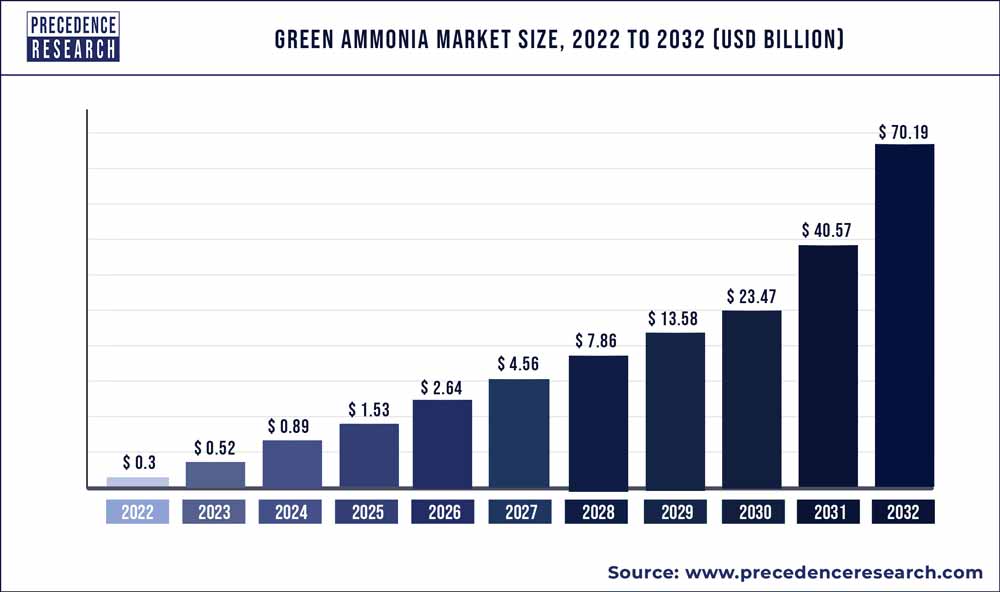 The industry for green ammonia is yet in the planning stages. The creation of green ammonia seems to be the subject of more efforts in research and development that are anticipated to rise as a result of increasing public awareness and governmental laws regarding carbon dioxide emissions and the preservation of the atmosphere's wellness.

Green ammonia also can able to have a big effect by lowering the world's fossil fuel reliance and helping to lower greenhouse emissions. Green ammonia is created by electrolyzing water to generate hydrogen, which is fueled by renewable energies including sun, air, and hydroelectric. Numerous industries, including farming, power storage, and the ocean, can benefit from the use of green ammonium.

Over the upcoming evaluation period, a significant shift towards zero-carbon via carbon reduction is anticipated to increase the usage of green ammonia. The need for green ammonia has been fueled by strict pollution rules and an emphasis on zero emission ambitions. In 2032, the proportion of a green ammonia industry is anticipated to reach between 3 and 4 percent of the total ammonia market. Additionally, according to the most recent projections, the end-user segment for fertilizer will continue to rise at a rate of about 75.4% between 2023 and 2032. This is a result of a rising preference for green ammonia in fertilizer production above traditional ammonia.

Using ammonia as a marine fuel: Currently, the transportation sector is responsible for 3% of the world's greenhouse gas emissions, primarily because vessels utilize a lot of petroleum and elevated gasoline. Heavy petroleum oils, which are produced as a by-product of petroleum products distilling, are the main form of bunker fuel for vessels. Once this fuel with a high sulfur concentration is used in a vessel's motor, toxic SOx is released into the atmosphere. The IMO's 2050 carbon reduction targets can be met, as per Decarbonization Forecast, issued by DNV GL, by using cutting-edge ship layouts and urea as renewable fuels. The best energy transporter of protons is ammonia. As a result, it can supply energy for ships. By 2050, ammonia could account for 25% of the fuel supply used in ships, based on the IMO.

Growth of a hydrogen-based business:  Developments in hydrogen connectivity will eventually open up chances for carbon-free hydrogen to be reused for an extended period in green methane formation.

During the forecast timeframe, alkaline water electrolysis was anticipated to hold the greatest share of the market in the Green Ammonia industry. The most well-known, reliable, and conventional method of electrolysis is reverse osmosis water electrophoresis. The electrode is a watery, alkaline solution containing sodium or potassium ions. It's an economical innovation that is still very young. 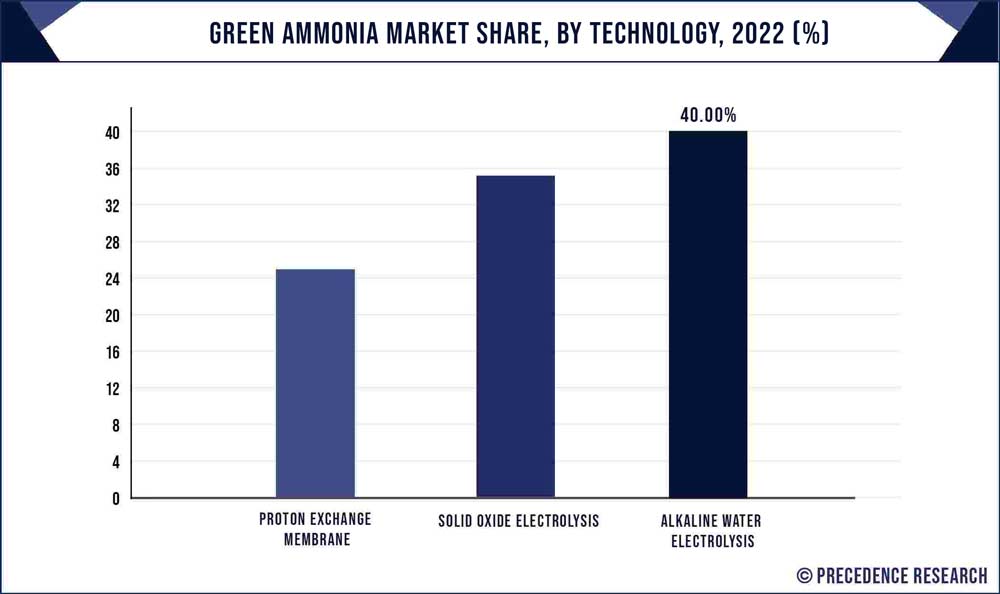 In 2022, it is anticipated that electricity production would hold the greatest share of the market within the green ammonia industry. The type of ammonia gas made from renewable resources that are healthier is called green ammonia. Electrolytes could be utilized to create fuel ammonia, which can serve as a renewable fuel for electricity generation, from surplus renewable energy produced in remote regions. Renewable energy source deployment is rising on a worldwide scale. This could be due to growing government initiatives to promote completely carbon-free agricultural operations as well as the growing acceptance of green ammonia for such creation of ecologically friendly fertilizers.

In terms of quantity, the European sector is predicted to be the biggest segment in 2022. The state's green ammonia industry is projected to see prospects as a result of an increase in hydrogen fuel developments and government initiatives to install hydrogen fuel in residential and commercial markets. Throughout the projected timeline, the U.S. is anticipated to continue to be one of the global markets with the quickest rate of growth for the manufacture and use of green ammonia. By 2032, the nation will probably have a sizeable portion of the global industry for green ammonia.

The U.S. green ammonia industry is being impacted by the sizeable presence of major green ammonia industrial companies and interesting technological sources, the execution of strict laws, and the rising prevalence of employing environmental fertilizers. Correspondingly, it is anticipated that during the projected timeline, rising investments through eco-friendly hydrogen, growing signiﬁcance of green ammonia as a source of hydrogen, as well as growing concentration on the creation of alternative energies again for power and transportation growing environment will drive the demand for sustainable ammonia within the nation.