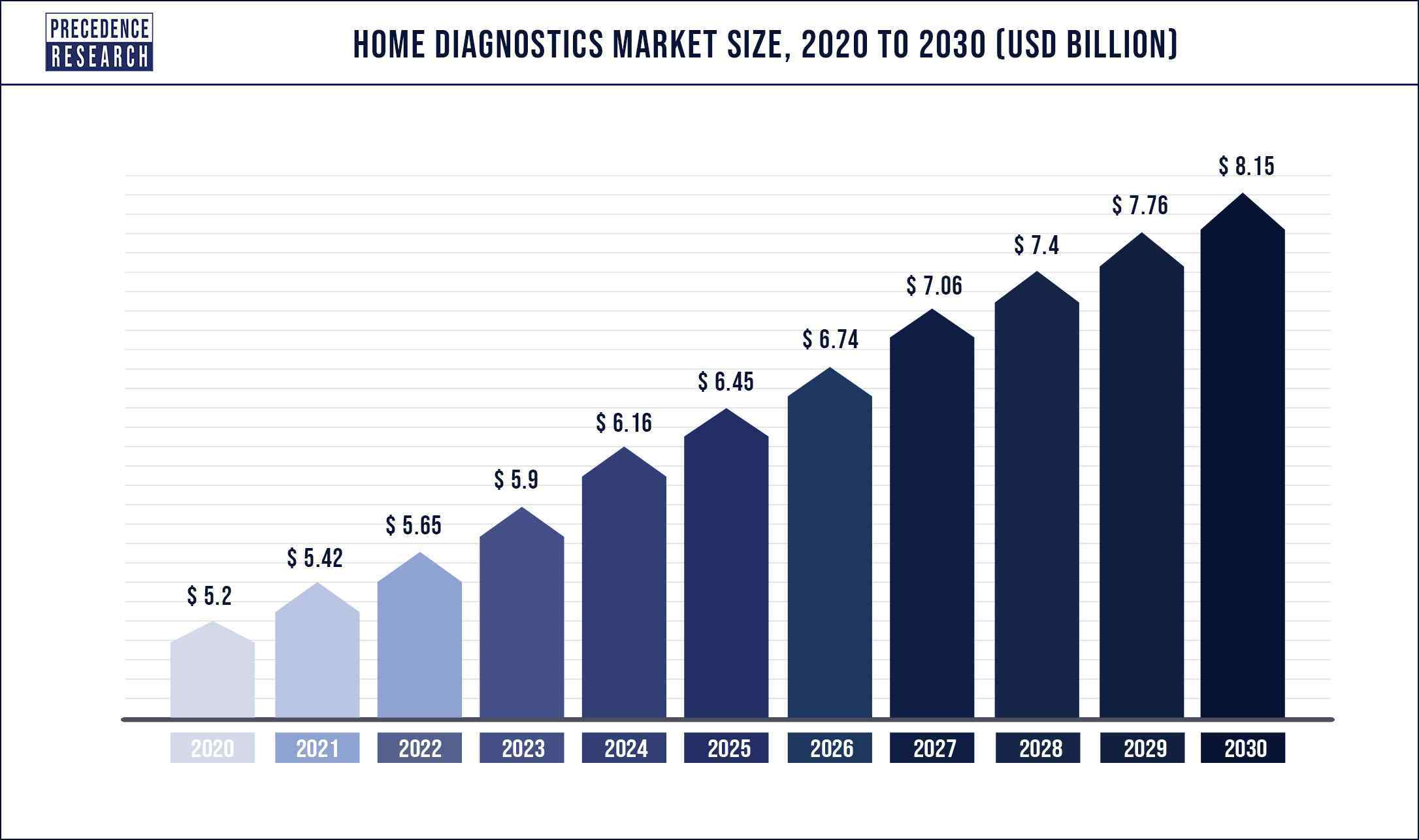 The technological advancements in the field of diagnostics have encouraged the development of several advanced devices and equipment that enables people to monitor their health conditions on regular basis. The conveniences associated with using the diagnostic devices at home by eliminating medical assistance have fueled the demand for various diagnostic equipment among the global population. Further, the rising prevalence of cancer, diabetes, and other incidences like growing uses of pregnancy test kits among women, where regular diagnosis is needed, is fueling the adoption of self-testing kits among the global population. According to the World Health Organization, around 1.5 million deaths were directly linked to the diabetes in 2019 and around 2.2 million deaths were linked to high blood glucose in 2012. According to the International Diabetes Federation, around 700 million people will have diabetes around the globe, by 2045. As per the data published by the US National Cancer Institute, the number of cancer survivors is expected to reach over 22 million by 2030 in US. The cancer survivors need to be monitored frequently. Moreover, the rising adoption of pregnancy test kits owing to the increased awareness regarding family planning among the population has fostered the growth of the global home diagnostics market.

The rising awareness amongst the population regarding the availability of various home diagnostic kits across the globe owing to the aggressive marketing and promotional activities of the top market players has significant contributions in the market growth. Furthermore, rising health consciousness, rising disposable income, easy availability of diagnostic kits, and rising consumer expenditure on the healthcare are the major factors behind the burgeoning demand for the home diagnostic kits across the globe.

Based on the test type, the glucose monitoring devices segment accounted largest revenue share in 2020. This can be attributed to the rising prevalence of diabetes among the global population. The rise in the blood glucose levels need to be monitored significantly in order to efficiently manage diabetes. According to the WHO, diabetes is a major cause of stroke, kidney failure, and blindness. Moreover, growing geriatric population is also considered to be an important driver, as the old age people are more prone to diabetes and other chronic diseases. According to the WHO, the proportion of the global population over 60 years is expected to increase from 12% to 22%, between 2015 and 2050. Furthermore, the increased awareness regarding the home diagnostics and increased adoption of the glucose monitoring has developed this segment as a leading home diagnostics market segment across the globe.

On the other hand, the infection testing kits segment is estimated to be the most opportunistic segment during the forecast period. This is mainly owing to the rising prevalence of infectious diseases among the population. The recent outbreak of the COVID-19 pandemic in 2020, boosted the demand for the infection testing kits demand due to the increased need for the detection of infections among the people.

Based on the form, the cassettes segment accounted for around 30% of the market share in 2020. The increased adoption of the cassettes is attributable to various factors such as low cost, easy availability, increased awareness among the population regarding cassettes, and ease of use. The extensive usage of cassettes among the population is expected to sustain the position of this segment throughout the forecast period.

Based on the distribution channel, the retail pharmacies segment dominated the market in 2020, in terms of revenue. This is attributed to the wide spread presence of small and medium sized retail pharmacy stores across the globe. The increased penetration of such stores across the developed and developing regions and easy availability of self-diagnostic products in these stores has made this a leading distribution channel.

Based on the region, North America dominated the global home diagnostics market in 2020, in terms of revenue and is estimated to sustain its dominance during the forecast period. U.S. is the major market that accounted for around 90% of the market share in North America in 2020. This is due to the increased per capita expenditure on healthcare. It was estimated that per capita healthcare expenditure in US in 2018 was around US$ 10,264. Moreover, the increased disposable income of the consumers, increased awareness regarding the home diagnostics, rising incidences of chronic diseases and growing geriatric population are the major factors that contributed towards the growth of the home diagnostics market in North America.

On the other hand, Asia Pacific is estimated to be the most opportunistic market during the forecast period. The huge population, rising healthcare expenditure, rising prevalence of various diseases, rising awareness regarding self-testing kits, rising penetration of retail pharmacy chain in the region, and rapidly developing healthcare infrastructure in the region are the major drivers of the Asia Pacific home diagnostics market.

Some of the prominent players in the global home diagnostics market include: