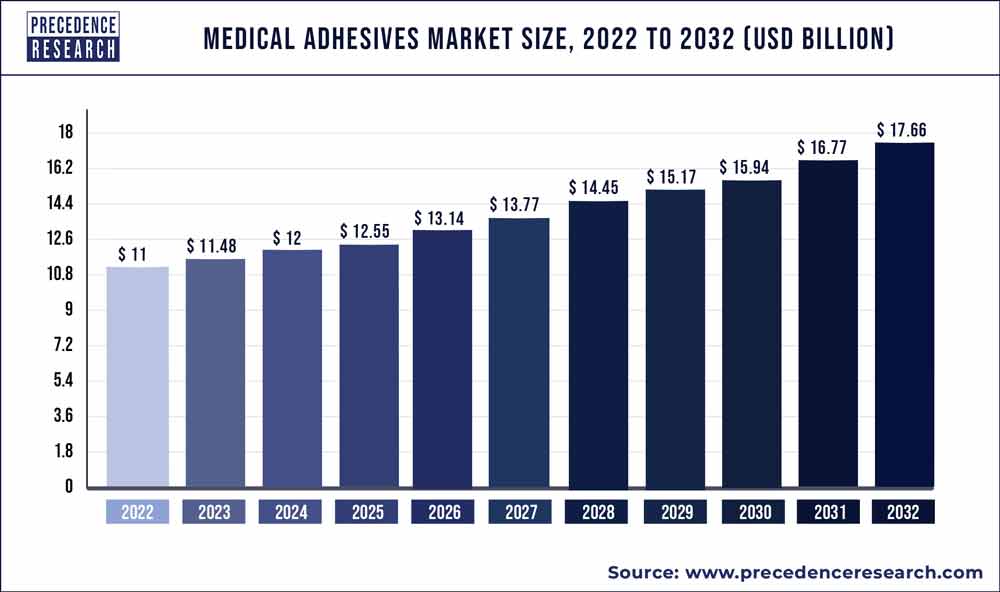 The faster working speed coupled with the use of medical adhesives over conventional wound closure measures like the stitches are expected to fuel future market expansion. To obtain a competitive advantage over current competitors in the sector, market participants are increasingly implementing better, yet cost-effective solutions with little maintenance and simple handling. Technological advancements have resulted in the creation of environmentally friendly and biocompatible surgical adhesives. Medical adhesives are now employed in a wide range of applications, from medical device assembly to internal and exterior medical uses. For example, cyanoacrylates are currently being used to treat skin wounds instead of stitches. The benefit of these products is that they may cover the whole wound. This approach prevents subsequent bleeding and thereby lowers the risk of infection.

According to the World Health Organization, an epidemic of unhealthy lifestyles is afflicting the worldwide population. Cardiovascular illnesses, according to the organization, are directly connected to an unhealthy lifestyle. As a result, the number of persons suffering from cardiovascular disorders is on the rise. Furthermore, the product's potential in interior medical applications such as heart surgery are growing. Fibrin-based adhesives, for example, which operate as a primary binding agent with a hemostatic effect, are seeing tremendous increase in cardiac surgery.

According to the World Health Organization, an epidemic of unhealthy lifestyles is afflicting the worldwide population. Cardiovascular illnesses, according to the organization, are directly connected to an unhealthy lifestyle. As a result, the number of persons suffering from cardiovascular disorders is on the rise. Furthermore, the product's potential in interior medical applications such as heart surgery are growing. Fibrin-based adhesives, for example, which operate as a primary binding agent with a hemostatic effect, are seeing tremendous increase in cardiac surgery. Furthermore, the growing worldwide senior population is a crucial element driving market growth. According to the United Nations, the worldwide population of people aged 60 and more was predicted to be 962 million in 2017. According to UN forecasts, the number of elderly people would more than quadruple by 2050, reaching 2.1 billion. The elderly are more prone to illnesses than the younger population. This is anticipated to provide the groundwork for market expansion in the following years.

The prevalence of cardiovascular disease is increasing internationally as a result of an unhealthy lifestyle. According to the World Health Organization (WHO), cardiovascular disease is the leading cause of mortality worldwide. According to the organization, 17.9 million individuals died in 2019 as a result of cardiovascular disorders. Congenital heart disease, stroke, peripheral artery disease, arrhythmia, congestive heart failure, cardiac arrest, excessive blood pressure, and coronary artery disease are the most frequent kinds of cardiovascular illness. The extensive use of medical adhesives such as bandages, surgical tapes, wound care patches, and transdermal patches is critical in the healthcare business. Medical adhesives such as cyanoacrylate and fibrin are used extensively in cardiovascular surgery to reduce bleeding.

Fibrin-based adhesives, for example, are projected to penetrate at a high rate because to their capacity to offer successful hemostasis in a variety of aortic and cardiac procedures. As a result, the need for medical adhesives in the healthcare industry is increasing. Because of a lack of exercise, good diet, and healthcare, the ageing population suffers from a variety of diseases. The US government is launching a number of efforts to provide improved health care to the region's elderly. The Atlanta Regional Commission (ARC) has undertaken a number of efforts to develop and restructure towns and communities to meet the requirements of the elderly and provide them with a healthy living environment.

The ageing population suffers from a variety of diseases as a result of a lack of exercise, good diet, and healthcare. The US government is launching a number of programs to improve health care for the region's elderly. The Atlanta Regional Commission (ARC) has undertaken a number of efforts to develop and restructure towns and communities to better meet the requirements of the elderly and provide them with a healthy living environment. Resins such as acrylic and silicone are the principal raw materials used in the manufacture of medical adhesives. Prices for these basic resources have been steadily rising over the last decade. According to the Federal Reserve Bank of the United States, the producer price index for plastic materials and resins production climbed by 62.1 percent between 2008 and 2018.Silicone resin is a main raw material used in the production of medical adhesives. Silicones are made from pure silicon metal, which is produced by the reduction of silica sand and coke. Silicone fluids, gels, elastomers, and resins are all types of silicone. Prices for silicone resins fluctuated significantly in 2017 due to a lack of supply and growing demand.

Acrylics led the market in 2021, and is accounting for 45.3% of total sales. Its supremacy is projected to continue in the future years. Acrylics material is used in wide range of the applications including dentistry for manufacturing the medical devices. Furthermore, acrylic are used in both external and internal medicinal application including skin tissue adhesives, medial appliances. The ability of silicone-based medical adhesives to stick to silicon and other difficult-to-adhere surfaces drives demand for them. Furthermore, they are more resistant to adverse weather and have a longer lifespan than acrylics. They are also used to make access points that are implanted beneath the skin of patients who require numerous infusions.

When compared to other resins, epoxy adhesives have higher heat and chemical resistance due to their ability to cross-link. Because of their capacity to fill vast gaps and adhere to a variety of substrates, they are commonly used for the deep-section potting of medical components and the needle assembly. They are also used to make access points that are implanted beneath the skin of patients who require numerous infusions. Natural goods like the plasma and fibrin-based, protein-based, chitosan-based, albumin-based, collagen-based adhesives are the examples of other resins. They are widely used in internal medical applications and are expected to dominate the market due to the biocompatibility and the hemostatic impact.

Reactive and other technologies, such as the one component reactive (moisture cure, heat cure and radiation cure), the two-component reactive, and the dual-cure adhesives and self-cure, dominated the marketplace in 2021, accounting for 85.5% of the total volume. The primary technologies used in dental applications are light cure and dual-cure. Internal medical adhesives, on the other hand, are typically bio-base and they based on two components of the reactive technology.

Hot melt technology, unlike water or solvent-based technology, does not require drying and has exceptional adhesion capabilities. The ability of hot melts to connect on both smooth and rough surfaces is a crucial aspect in aiding the segment's rapid expansion. Hot melts are also solvent-free, environmentally safe, and have a quick-setting time. In transdermal patches, hot melts are preferable over water-based solutions to ensure good adhesion over moist skin.

Water is employed as the carrier or the diluting medium in a water-based technology and it is permitted to evaporate or be absorbed by many substrates. These products are usually made up of acrylic polymer emulsions in water. They have strong adherence to polar surfaces, the good transparency retention, also the resistant to harsh environmental conditions.

Organic solvents are employed in solvent-based technology as a carrier or diluting medium, as well as for surface preparation and clean-up. Because of environmental and worker safety restrictions, as well as rising crude oil costs, demand for solvent-based adhesives is likely to expand at a slow pace.

In 2021, the global medical adhesives market was led by internal medical applications. In terms of revenue, it is likewise expected to expand the quickest, with a CAGR of 8.9%. Bioadhesives are commonly employed in internal medical applications, mainly in intracorporal situations requiring direct contact with organs, tissues, and bodily fluids. These products are mostly used to reduce internal bleeding issues. Wound dressing, the skin tissue adhesives, the transdermal patches, the bandages, electrodes, and ostomy care surgical drapes, are examples of external medical uses. Because of the limits of this approach, adhesives in this same category are replace traditional closure techniques like as wires, the sutures, and the staples. 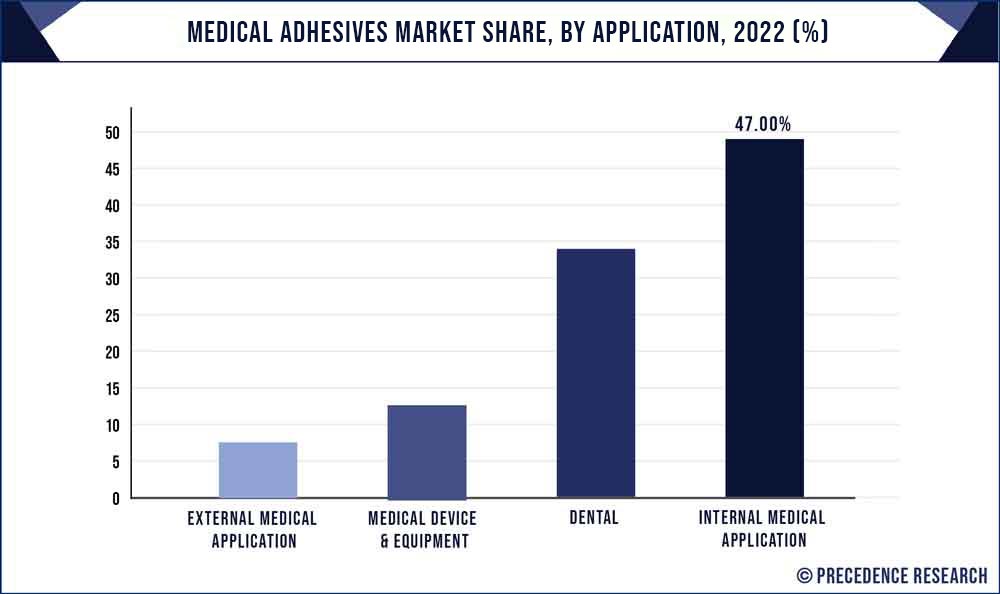 Adhesive resins and self-adhesive resins are examples of products used in dental applications. These materials work as an adhesive to keep the casting in place on the tooth structure. They are often composed of methyl acrylate, acrylic, and diacrylate polymers coupled with adhesive monomers capable of forming strong bonds with metal surfaces. To bind to metal, ceramic, and dental substrates, they may require various primers. Adhesives are used in medical devices and equipment for needle assembly, polycarbonate component assembly anesthesia-mask bonding, hearing-aid moulding, (e.g., surgical pumps, blood oxygenators, and heat exchangers), and other medical device bonding. The products substrate adaptability, high gap filling, high peel, robust heat and chemical resistance, low shrinkage, and quick cure are important elements driving their rise in medical devices and equipment.

Over the projection period, Asia Pacific is expected to be the fastest expanding regional market. The Asia Pacific area's vast population, increased healthcare awareness, and greater risk of wound infections are the primary growth reasons for this region. The region's large number of diabetic patients is also projected to contribute to the growth of the medical adhesives business.

According to the United Nations, Asia Pacific accounts for 60% of the world's population. Furthermore, Asia Pacific is home to a huge number of diabetes sufferers. According to the Asia’s Diabetes Prevention Organization, Asia Pacific region accounted for around 60% of all type 1 diabetes cases around the globe. This drives the demand for medical adhesive products like the transdermal insulin patches, and also others in the region.

According to the IBEF, the healthcare sector in India is expected to reach USD 372 billion by 2022. The hospital business in India is expected to develop at a 17% CAGR to USD 8.6 trillion by 2022, up from USD 4 trillion in 2017. Growing health and preventative care knowledge, growing income levels, and more access to insurance are all predicted to drive up demand for healthcare services in the future. These good changes in India's healthcare industry are expected to be important drivers of the country's medical adhesives market. The increase in government spending on healthcare is likely to drive up demand for medical adhesives in India. For example, according to the Economic Survey for 2022, this spending was 2.1 percent of GDP in FY2021-22, up from 1.8 percent the previous year. Rising favorable government policies are also projected to boost India's healthcare industry, affecting medical adhesives market growth. Ayushman Bharat, for example, is a plan for vulnerable and poor families that provides coverage of INR 5 lakh per household for secondary and tertiary hospitalization.