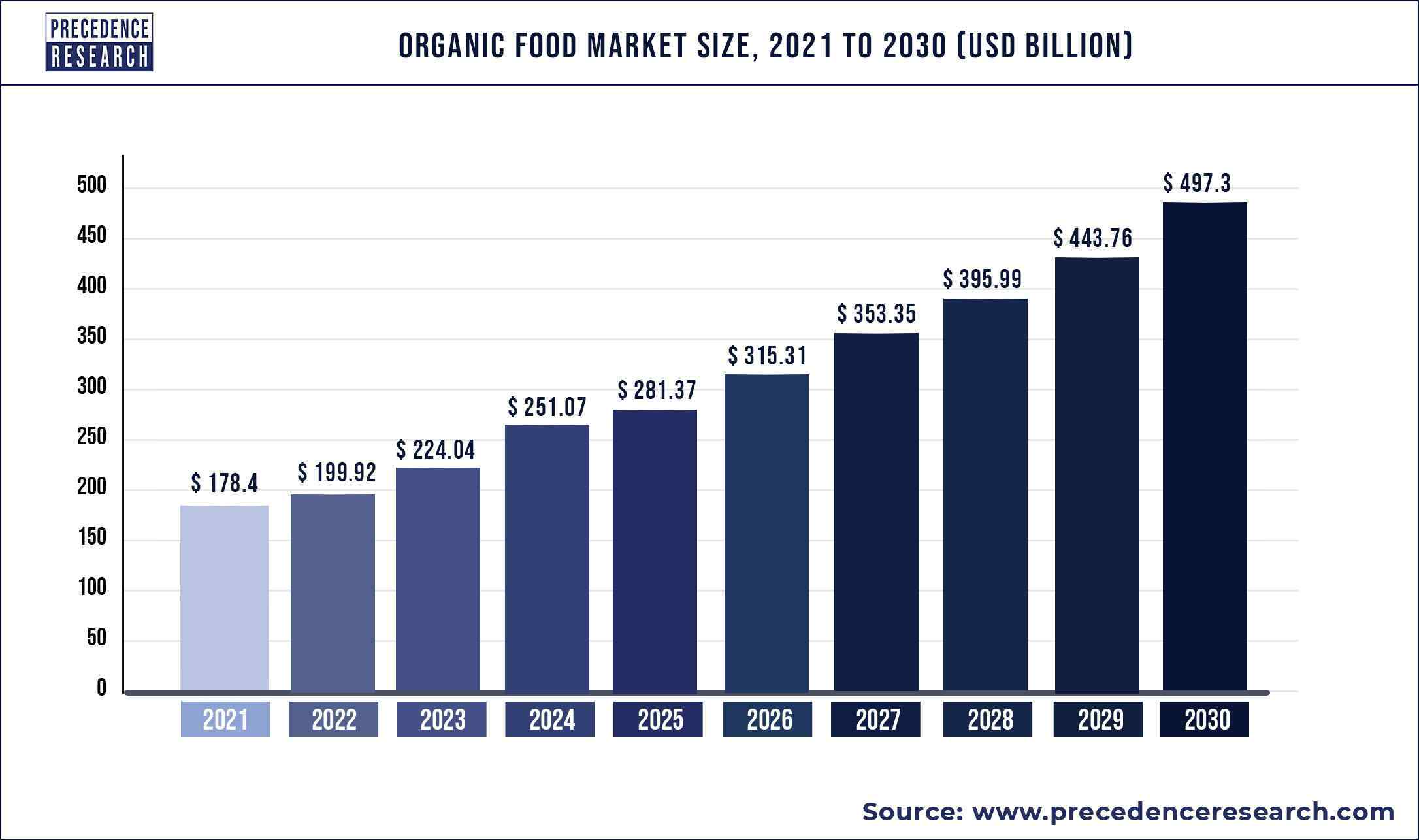 The agricultural product is known to be organic if there has been no use of any substances that have been prohibited by law in the soil in which the crops have been grown. It is necessary that the soil is certified to be organic and there has been no use of the substances for a period of about three years prior to harvest. The substances that have been prohibited from being used in the soil are chemical fertilizers and pesticides. Apart from the agricultural produce there are dairy products and meat as well as processed food products are the other types of organic products. There's an increasing demand for organic food of different types across the globe as it is believed to be free of any chemicals which harmed the body due to a continuous consumption. But the producing off such organic foods incurs heavy cost and hence the organic food products are costly as compared to the other food products.

The meat obtained from animals also needs to be organic in the nature which means that the animals are fed with organic food or farming which does not include the use of any antibiotics or even the growth hormones. The amount of the produce that is derived from the organic farming methods is usually low as compared to the farming done with the help of synthetic pesticides off fertilizers. The synthetic pesticides and fertilizers enhance the productivity of the crops. As the produce is less the organic farm products are extremely expensive. The shelf life of organic produce is not that good as compared to the other food products.

Organic food spoils easily as there is no use of any artificial preservatives which help in extending the shelf life of the food products. Irradiation is also not used in the production of organic food which happens to be another reason for the food to spoil quickly. A harmful bacteria for the humans is found in the animals. The bacteria which are present in the intestinal tract can cause certain threats to the human being. When it comes to consumption of meat the conventional food is better as compared to the organic food due to the risk of contamination. It is also extremely difficult to find a store which provides organic food in most of the developing nations. As organic farming is not feasible in every region there is a shortage of organic food in many developed as well as developing economies.

The market for organic food products is expected to grow across the globe in the developing as well as the developed nations as it happens to be a healthier option as compared to the conventional food products. Organic food produce is not harmful for the body as it does not contain any chemicals. as the organic crops are grown without the use of any chemical fertilizers pesticides or even irradiation there is a growing demand for these crops. The animals used in the organic farming are also in greater demand as there is no use of antibiotics or any growth hormones in order to increase the product all of these factors are responsible for the growth of the market in the coming year period.

As there is no use of chemicals in organic farming and also there is no use of any preservatives to increase the shelf life of the product the organic food products cause no damage to the body. The food is extremely safe from any poisonous content which may cause serious health issues in the long run. Due to the increasing concern for the environment organic farming is gaining momentum as this type of farming has less complications but it comes to the quality of the soil as well as the harm caused to the atmosphere. As the land used for organic cultivation is used for multiple crops and this helps to conserve the soil by reducing the depletion of nutrients. In comparison to the traditional farming systems or the conventional farming systems organic products have greater content of minerals.

Other organic beverages are also expected to have a good amount of market share in the developed nations. There's an increased consumption of tea and coffee in many nations these beverages are expected to drive the market growth. As many consumers are opting for tea and coffee as compared to the carbonated beverages the market for organic beverages is also expected to grow in the coming years. As there is a growing popularity of vegan culture in the developed nations as well as the developing nations and also an increasing awareness regarding the low fat diet in order to curb the obesity or other health related disorders the market for organic fruits and vegetables is expected to grow in the coming years

By distribution channel, the off line segment dominated the market in 2021. The offline stores offer a wide range of products which may be domestic or even branded in nature. The organic products are available across many specialty stores supermarkets and hypermarkets and also other general stores. In the developed nations the sales of the organic food products is good but in order to increase its sales in the developing nations hypermarkets and supermarkets adopting a landscape which will be favorable for organic food products. Offline channel is used in order to increase the sales of these products. 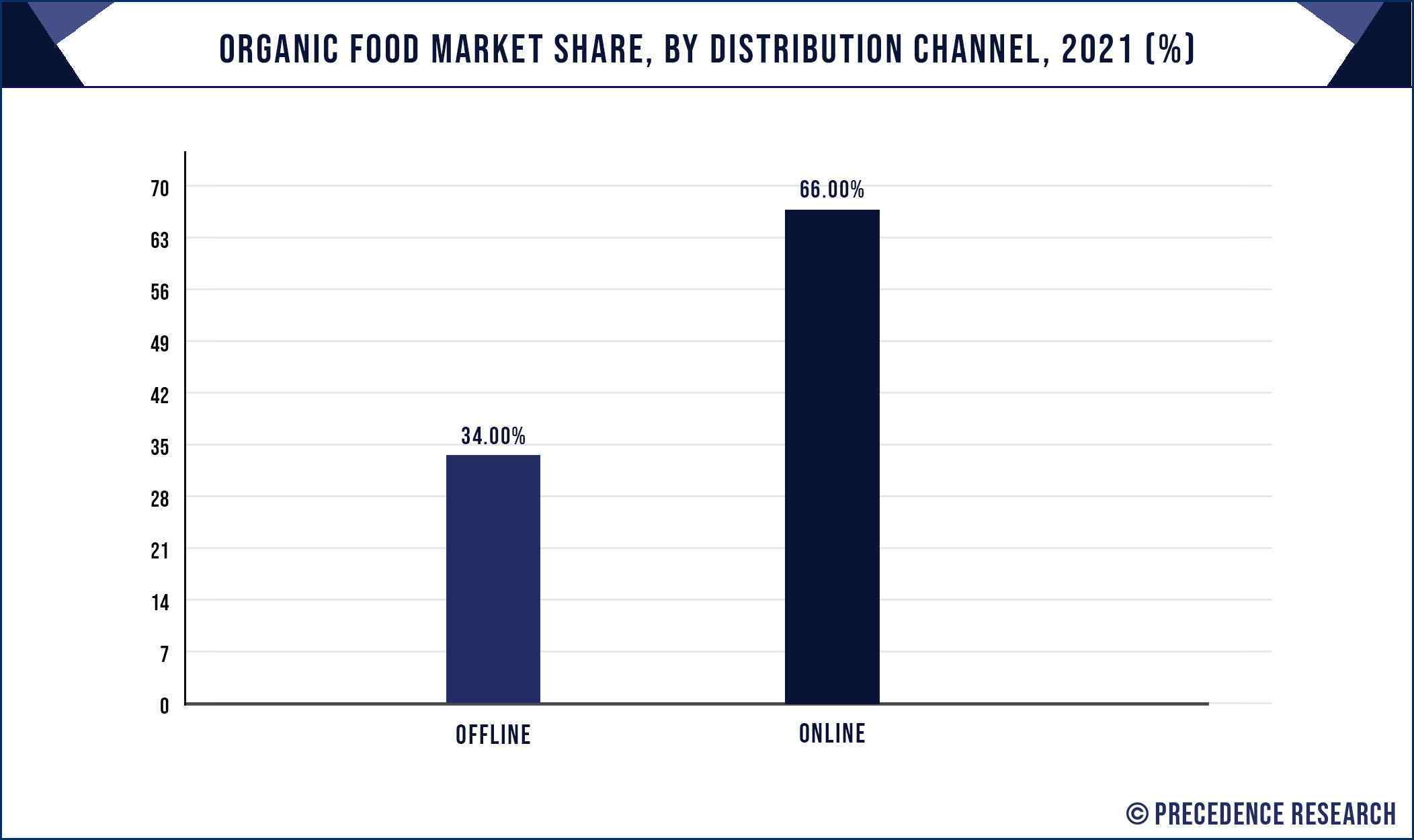 Apart from the offline channel the online distribution segment is also expected to have a good amount of growth during the forecast period. There's a growing demand through the online channel due to the use of Internet and the use of target marketing. The market is expected to grow as consumers plays orders for subscription boxes which help them in booking their organic produce in the market. There's a growing trend of purchasing organic food products from the online platform. Increased use of Internet and availability of smartphones is another reason for the growth of the online segment. The facility of express delivery which helps in delivering the food products in a shorter period of time is also expected to drive the market growth for this segment after the pandemic there has been an increasing demand for organic food and beverages through the online segment in order to reduce human contact. There's a shift in purchasing organic items from the offline stores to the online stores in some of the nations due to the convenience provided by the online segment.

The North American region is expected to dominate the market in the coming years period there is a growing demand for organic produce from the United States. Increased demand for organic food produce from Australia is also compelling the government to have a few policies in place which will be supportive of the organic farming. As the regulatory bodies are taking interest and they are providing policies which would be supportive of organic farming the market in the developed nations especially in the North American region and the European region will grow well in the coming years. Increase in the purchasing power will also lead to the market growth in this region. Growing popularity of vegan diet and the benefits associated with the adoption of this diet has also led to an increased consumption of organic food products. As there is an awareness regarding the complications of the consumption of various chemicals which indirectly enter the human body due to the use of preservatives and fertilizers or pesticides in increasing the yield of the crop has led to a greater demand for organic farming.