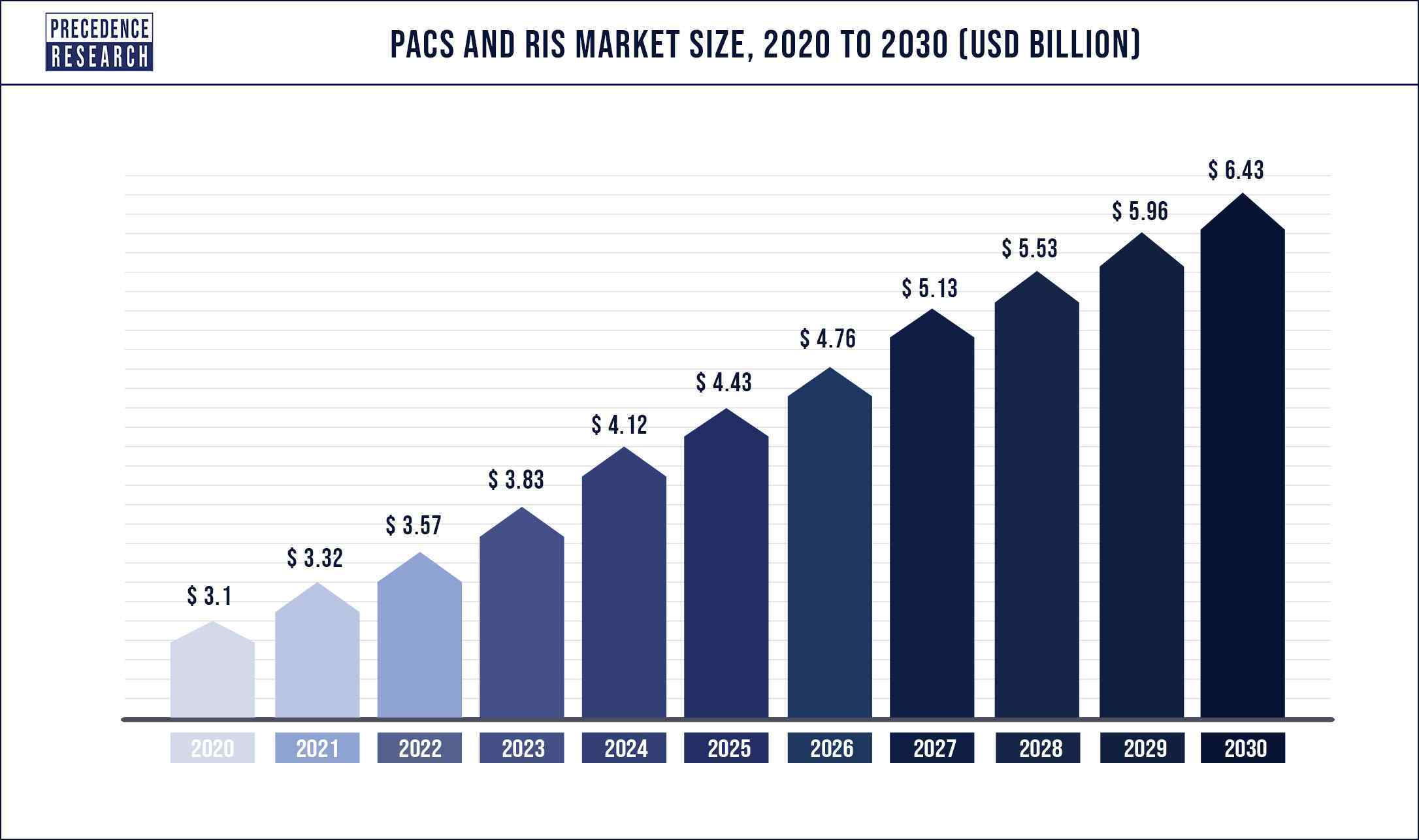 The rising investments on automation and digitalization of the healthcare sector are the primary driver of the global PACS and RIS market. The increased demand for the digital imaging such as X-Rays, MRI, ultrasound, and digital pathology is a significant driver as picture archiving and communication (PAC) provides convenient access and low cost storage solutions for the digital images. PACS offers economical access to various source modalities like computed tomography, positron emission tomography, and X-Ray plain film. The advantages of PACS like time-saving and digitalization over the traditional image storage, display, and distribution is a significant factor that has boosted the demand for the PACS across the healthcare industry. The PACS has wide applications in the diagnostic centers, clinics, and hospitals as it offers a convenient digital image storage by eliminating the storage purposes of the hard copies. The increased government and corporate investments in digitalizing the healthcare units for cost reduction and increasing the profits is expected to further drive the growth of the market during the forecast period.

The rising prevalence of various chronic diseases among the global population is boosting the demand for the diagnostics and hence PACS and RIS is getting much more traction in providing economical, easily accessible, and convenient solutions for the digital image storage. The growing applications of various PACS such as cardiology PACS, orthopedic PACS, dental PACS, and oncology PACS is fostering the market growth across the globe. The growing adoption of the cloud-based PACS and RIS owing to the quick access, broad network access, and on-demand service is expected to fuel the growth of the market in the upcoming future. Further, remote accessibility through smart phones is further fostering the demand for RIS and PACS among the healthcare professionals. Rising government investments in the development of strong IT and telecommunications infrastructure is expected to drive the market in the forthcoming years.

Report Scope of the PACS and RIS Market

Based on product, the PACS segment accounted for over 83% of the market share in 2020. This is basically due to the extensive usage of cardiology PACS, orthopedic PACS, dental PACS, and oncology PACS across the globe. The rising cases of cancer among the population has significantly boosted the usage of oncology PACS. According to the International Agency for Research on Cancer, in 2020, around 19.3 million new cancer cases and 10 million cancer deaths were reported across the globe. The global cancer cases are estimated to grow by 47% from 2020 to 2040. It is expected that 28.4 million cases will be recorded in 2040, globally. Hence, the rising cases of cancer will help to sustain the dominant position of this segment throughout the forecast period. 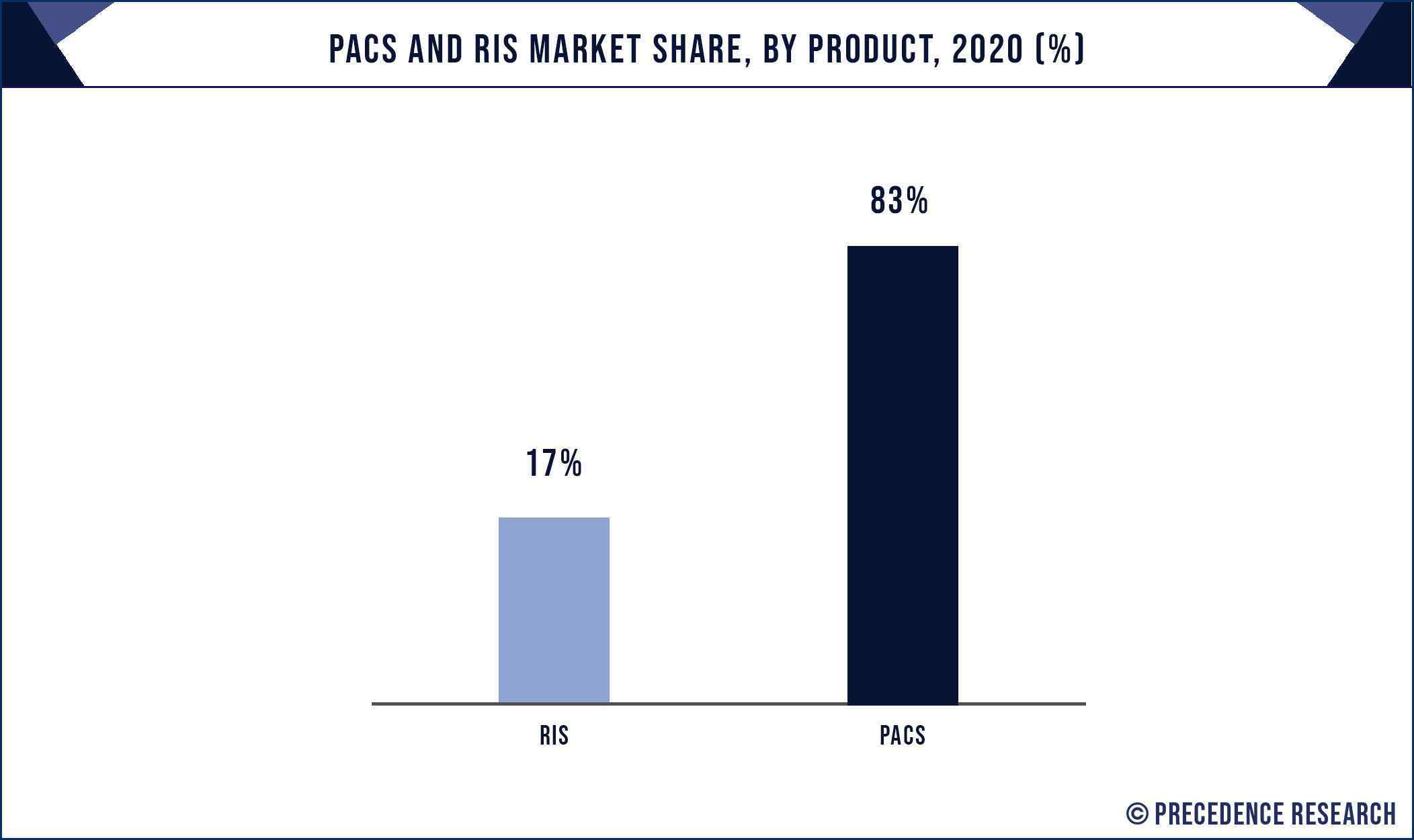 On the other hand, the RIS is estimated to be the most opportunistic segment during the forecast period. The rising number of patients in the hospitals and other healthcare units is rising owing to the rising prevalence of various chronic diseases and growing geriatric population across the globe. The need for reducing paperwork and demand for digitalization of the healthcare systems is boosting the growth of the RIS segment.

Based on component, the services segment dominated the market in 2020, in terms of revenue and is estimated to sustain its dominance during the forecast period. This is simply due to the lack of proper knowledge about handling the digital systems of the PACS and RIS amongst the healthcare professionals. Therefore, the third-party services are adopted for the efficient utilization of healthcare information services like PACS and RIS while achieving cost efficiency.

Based on end user, the hospitals segment dominated the global PACS and RIS market in 2020, in terms of revenue. This can be attributed to the enhanced financial, clinical, and administrative services that are offered by the latest PACS and RIS healthcare information systems. The increased number of hospital admissions which results in the generation of huge digital diagnostics results that needs to be efficiently managed. The rising number of private hospitals across the globe is expected to further drive the growth of this segment during the forecast period.

The diagnostic centers segment is expected to be the fastest-growing segment during the forecast period. This is attributed to the rising demand for the diagnostic services owing to the rising prevalence of chronic diseases among the global population. Further, the growing demand for the automation and integration of healthcare information for efficient patient care, and rising adoption of the PACS and RIS across the globe is expected to foster the growth of this segment.

On the other hand, Asia Pacific is estimated to be the most opportunistic market during the forecast period. The rising government investments on the development of sophisticated healthcare infrastructure in the region coupled with the rising penetration of numerous private clinics and diagnostic centers is expected to augment the demand for the PACS and RIS in Asia Pacific during the forecast period.

In April 2020, Wellbeing Software and Behold.ai collaborated, to integrate Behold’s AI-based red dot algorithm with the Wellbeing’s RIS for COVID-19 diagnosis in UK.

Some of the prominent players in the global PACS and RIS market include: