The global passive and interconnecting electronic components market was estimated at USD 176 billion in 2021 and is expected to reach over USD 273.9 billion by 2030, poised to grow at a CAGR of 5.6% from 2022 to 2030. The Asia Pacific market has accounted highest revenue share of around 56% in 2022. 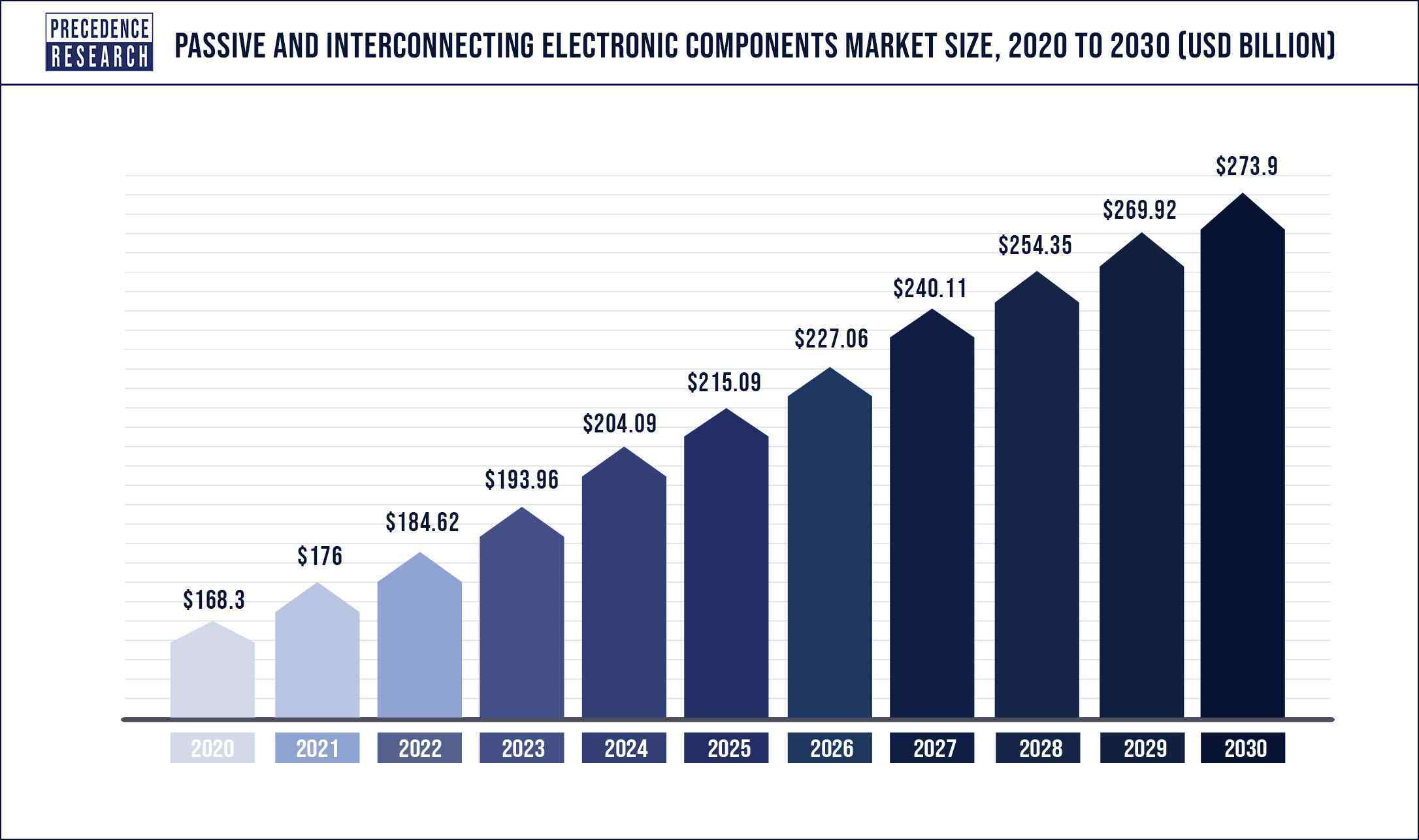 Electronic equipment such as cellphones, computers, electrical home appliances, and gaming consoles make use of passive and interconnected electronic components. As a result, the surge in demand for smartphones, laptops, gaming consoles, and household appliances is likely to be the primary driver of market growth.

The infrastructure for 5G networks is being rapidly built-in key countries such as the United States, China, South Korea, Japan, and the United Kingdom. The impending 5G services, together with a growing demand for high-speed internet connectivity among customers, have fueled global demand for 5G devices. The surge in demand for 5G devices across a variety of industries, including industrial, automotive, and consumer electronics, is expected to drive the market for passive and linking electrical components..

The industrial sector is quickly changing as a result of the widespread adoption of internet of things (IoT) devices. By providing simplicity of operation and reducing total system downtime, industrial IoT devices assist manufacturing facilities in increasing overall productivity and operational efficiency. In addition, as part of the fourth industrial revolution (Industrial 4.0), numerous manufacturing facilities are installing a variety of connected devices to improve operational operations via remote monitoring. As a result, the market is likely to grow faster as IoT devices are deployed across a wide range of industrial applications, such as process automation and motion control.

Report Scope of the Passive and Interconnecting Electronic Components Market

Based on the component, the capacitor passive segment is expected to witness the highest growth accounting for more than 38% of revenue share in 2022 and it is also considered to grow significantly during the forecast period. It's due to the increased demand for various types of capacitors in consumer electronic devices, industrial applications, and other uses.

The transformer product segment is also expected to grow significantly during the forecast period owing to the vital role of the transformer in an electronic device by stepping down the high voltage to the required voltage for the circuit. As a result of the increased manufacturing of various types of household appliances, industrial digital devices, and other consumer electronic items, transformer demand is expected to skyrocket.

The interconnecting product segment is also estimated to grow remarkably during the forecast period owing to its widespread installation in various electronic devices such as gaming consoles, digital cameras, and others to transmit media, content, and other applications. The interconnecting segment includes printed circuit boards (PCB), connectors/sockets, switches, relays, and others. Additionally, the surge in demand for networking and storage devices in data centers is further anticipated to boost the market growth.

Based on the Application, the consumer electronics application segment is forecasted to contribute the largest revenues share of more than 42% in 2022 and is estimated to grow at a CAGR of 5.5% over the forecast period. It's owing to a surge in demand for passive and linking components for a variety of consumer gadgets, including wearables, smartphones, set-top boxes (STBs), and household appliances.In addition, demand for security cameras, sensor-based devices, and robotics is fast rising across a wide range of industrial applications, including process automation and remote monitoring. And it is projected that these characteristics will propel the market forward. 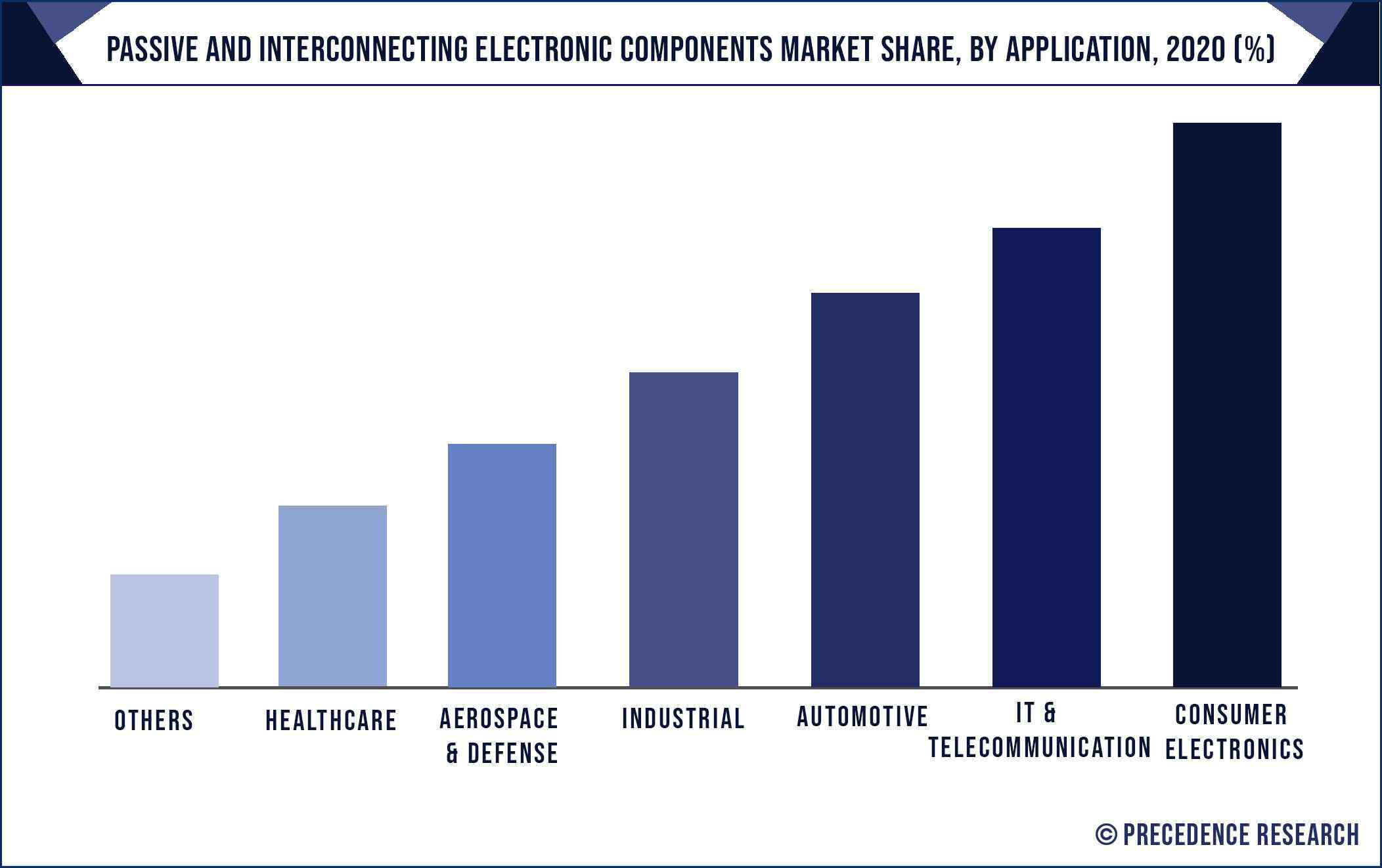 The increased demand for networking devices such as modems, gateways, and repeaters is likely to drive market expansion in the office automation and residential application segments. Furthermore, 5G telecom infrastructure development is accelerating, and telecom operators are substantially spending in order to give higher bandwidth experiences to their consumers, which is expected to stimulate the growth of the IT and telecommunication application market. Furthermore, the market is expected to increase due to strong demand for infotainment systems, driver assistance systems, Global Positioning Systems (GPS), and other electronic systems for automotive applications.

Due to the presence of major market players in the region such as Samsung Electronics Co., Ltd., BBK electronics (Includes brands such as Oppo, Realme, and Vivo), Foxconn Technology Group, and Xiaomi Corporation, Asia Pacific dominated the Passive and Interconnecting Electronic Components Market, contributing a revenue share of more than USD 97.1 billion in 2020. China dominates the passive and interconnecting electronic components market in this region and is the major exporter of electronics products across the world. For instance, In 2018, China exported more than USD 50.0 billion value of passive electronic components across the globe. 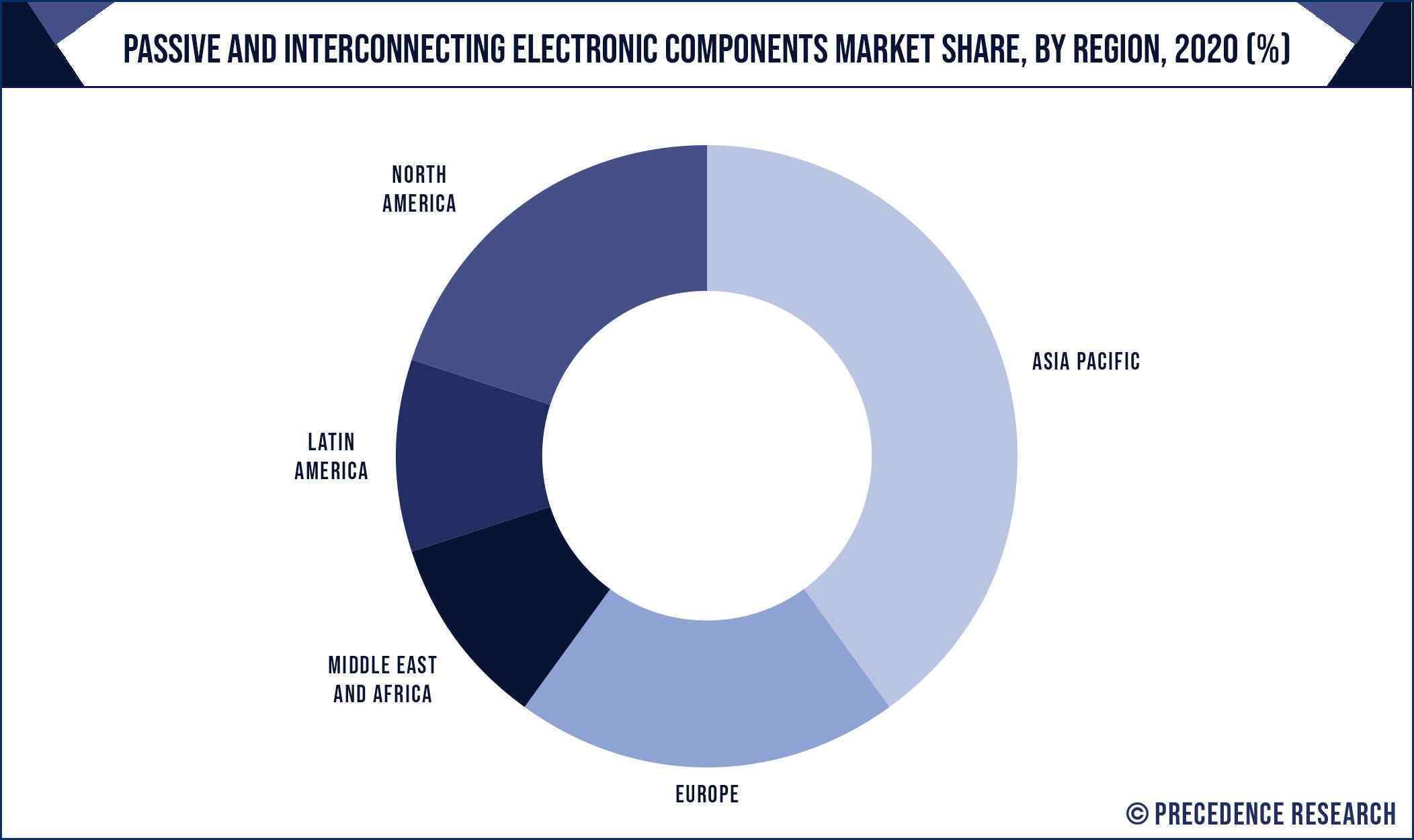 In North America, the soaring demand for connected cars in the U.S. is leading the telecom giants such as Verizon Inc.; and AT&T Inc., to invest heavily in deploying 5G network infrastructure. The 5G mobile network is estimated to provide unified connectivity to vehicles with infrastructures across the country. Also, the U.S. government is spending heavily on building smart cities countrywide. In the future years, the high demand for 5G networks would need the implementation of 5G network infrastructure, which will propel the industry forward. For instance, On 23rd September 2021, KYOCERA AVX Components Corporation, a leading manufacturer and supplier of sophisticated electronic components and connector, sensor, control, and antenna systems, has introduced a new series of external, dual-band Wi-Fi antennas that are optimized for 2.4GHz and 5GHz applications and are IP67-rated. The new X9001748 Series external, dual-band Wi-Fi antennas have a standardized, ready-to-use, RoHS-compliant design with IP67 sealing for reliable outdoor operation, and provide high-gain, high-efficiency, and high-reliability performance in a variety of device configurations and frequencies spanning 2,400–2,485MHz and 5,150–5,850MHz.