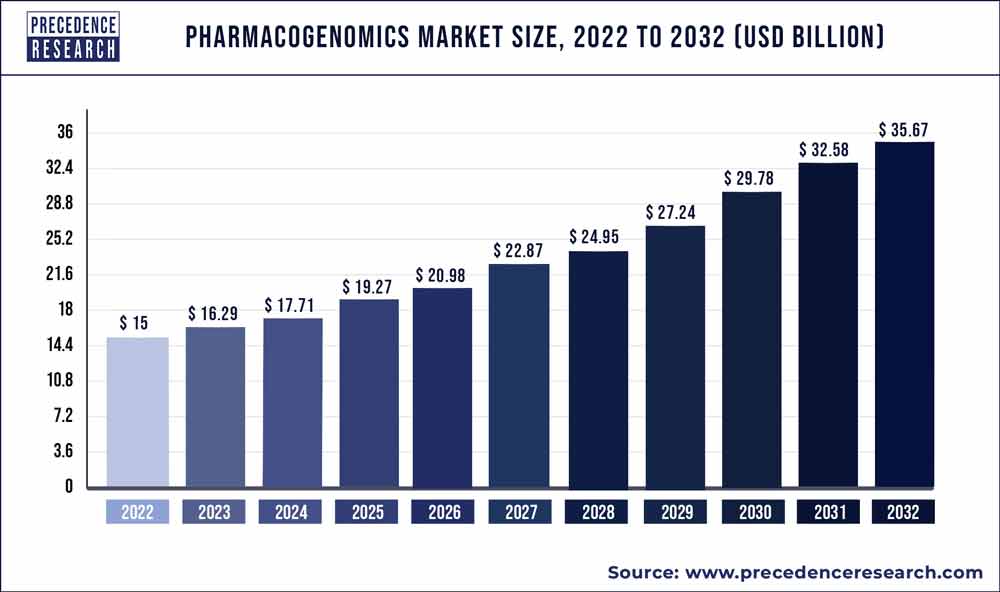 Pharmacogenomics is basically related to genetics related with support and response of the drug therapeutic activity to separate individual. Pharmacogenomics involves the study of the genomes and and the response the drug.  It involves the study of effect of drugs over different genomes of different individual with pharmacokinetics study of (Absorption, distribution, metabolism and elimination of the drug and time taken to perform the ADME process and the affectivity of the drug over a disorder.

Pharmacogenomics focuses to research and develop more effective and efficient drug therapy suitable to different genomes to increase the effectiveness of the drug and less side effects of the drug to the individual. Increasing population along with pollution with rising chronic disorders such as tuberculosis, cancer, HIV in the individuals and newly developed technologies in health care sector have increased the pharmacogenomics market rate. Moreover, advance develop technologies such molecular diagnostics for more clear understanding and to study the genetics structure of the active patients which also support to boost the growth of pharmacogenomics market rate.

The advanced develop technologies of pharmacogenomics with study of the genes in the individuals and to increase the affectivity of drug for therapeutic action and to decrease the adverse of the drugs to the individuals. Increasing number of technologies developed with increasing number of population and rising disorders in individuals such as cancer, HIV, tuberculosis, malaria and may more disease which gave rise to adapt the new technologies for increasing the health care treatment and safety of the patients. Increased awareness among the people and health professionals about the availability of substitute treatment to the disorder and to increase the efficienciency with drug development.

Moreover, increased research and development based on pharmacogenomics and the study of drug development to produce the effective and efficient drug according to genomes against the various disorders. Increased support of the government in health care center to develop the advance medical technologies for health care support of the patients with increased government policies of reimbursement for the citizens to enable the newly developed treatment and the awareness and benefits obtained boosts the pharmacogenomics market to a greater extent during the forecast period.

Report Scope of the Pharmacogenomics Market

Segmentation of pharmacogenomics based on product increased various drug products with higher efficacy and less adverse reactions to the drug therapies. Improved technologies, applications, end users worldwide with enhanced research and development introduced by the market players contributes for the expansion of the pharmacogenomics market during the forecast period.  Increasing population with increased disorders among the people and raised demands from the health professionals for integrating new drug therapies for higher efficacy and less adverse effects have driven the market to grow high.

Segmentation of pharmacogenomics based on application it is segmented in various disorders incudes such as cardiovascular diseases, neurological disease, oncology disease, psychiatry, infectious diseases, pain managing, HIV, AIDS, tuberculosis and many more diseases. In oncology pharmacogenomics is utilized for effect of drug therapy and developed drug with higher efficiency over the genomes of the individual. The oncology to hold the highest position in the applications section. Increase in prevalence of cancer patients across the world with increased growth of market due to increased demands from the health professionals and new drug therapies and technologies developed with higher efficiency and decreased side effects to eradicate the disease completely.

Segmentation of pharmacogenomics based on the end user divided in to hospitals, health clinics, research and development sector, laboratories, medical institutes. Moreover hospitals and health clinics have highest revenue share which holds the pharmacogenomics market to the top position with increased demands and awareness developed among the health professionals due to advance drug development and technologies with good output and increased therapeutic index have expanded the market growth to a larger extent during the forecast period.

Segmentation of pharmacogenomics based on geographical regions North America, Asia Pacific region, Europe, Latin America, Middle East and Africa have the highest increased revenue share with wide drug developments and higher efficiencies and increased demand from the health sectors for patient’s safety and eradication of the diseases.