Status : Published | No. of Pages : 150+ | Category : Semiconductor and Electronic 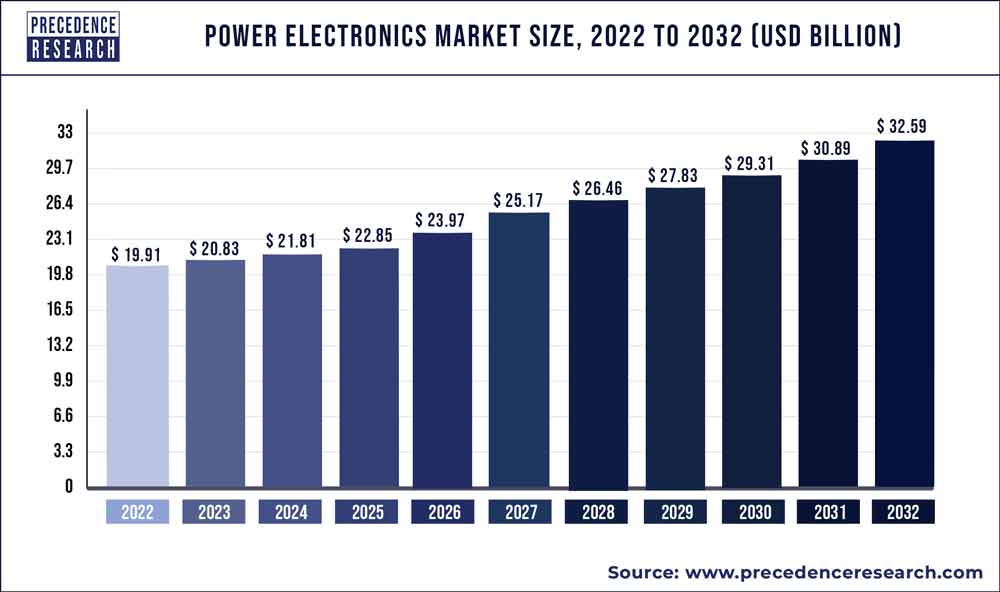 The power electronics are increasingly used across various energy conversion end use applications. The rapidly growing demand for the power-efficient devices across numerous end use verticals is significantly boosting the growth of the global power electronics. The increasing demand for the automation technologies and emergence of industry 4.0 are the major factors that drives the growth of the power electronics market. The rising adoption of the automated assembly lines and industrial robots is a significant market driver. However, the ongoing shortages of the semiconductors across the global markets is hampering the market growth. The rising gap between the demand and supply of the semiconductors may have a potential adverse effect on the global power electronics market during the forecast period.

Based on the material, the silicon segment dominated the global power electronics market in 2020, in terms of revenue and is estimated to sustain its dominance during the forecast period. This is simply attributed to the extensive use of silicon in the production of various power electronics for the different end use applications. Further, silicon is currently the most desirable substrate for producing most of the semiconductor wafers and it is most desirable for the low-power application.

On the other hand, the sapphire is estimated to be the most opportunistic segment during the forecast period. This is mainly due to the rising adoption of the sapphire in the production of various products such as smartwatches, LED lights, and optical wafers.

Based on the application, the aerospace & defense segment dominated the global power electronics market in 2020, in terms of revenue and is estimated to sustain its dominance during the forecast period. The rising adoption of the power electronics in the aerospace & defense industry for wider applications such as cabin lighting, flight control, communications, power drive controls, and navigations to name a few, is significantly augmenting the growth of this segment. The aerospace and defense industry is investing heavily on the development of compact, low weight, and cost effective equipment and along with it also focusing on improving surveillance, communications, and commands. This factor has resulted in the growth of the segment.

On the other hand, the automotive is estimated to be the fastest-growing segment during the forecast period. This is attributed to the rising demand for the electric and hybrid vehicles among the global consumers. Furthermore, the increased disposable income and increased awareness regarding the environment among the population of the developed regions like Europe and North America is fueling the adoption of the electric vehicles. Therefore, the rapidly growing automotive industry is expected to drive the growth of the power electronics in the upcoming future.

Based on the device, the discrete segment accounted 65% revenue share in 2020. The discrete segment consists of thyristors, diodes, and transistors, which are extensively used in the production of the electronic circuitry. This segment accounted for around 64% of the market share in 2020. It is used in industrial applications owing to its lower noise production and low power consumption. The increased utilization of discrete devices in the power invertors, motor drives, and electric power grids has resulted in its dominance in the market.

Based on region, Asia Pacific region accounted 61% revenue share in 2020. Asia Pacific is also estimated to be the most opportunistic market during the forecast period. It accounted for around 40% of the market share in 2020. This region is characterized by the presence of numerous top manufacturers in various industries such as consumer electronics, automotive, ICT, and industrial. The rising government initiatives to deploy renewable energy sources is fostering the demand for the power electronics. Moreover, countries like India, China, Japan, and South Korea are presenting lucrative growth opportunities owing to the presence of top electronic manufacturers. The government in these countries are framing favorable regulations that attracts FDIs and the manufacturers are increasingly investing in this region owing to the cheap availability of the various factors of production. Hence, Asia Pacific is the largest and the fastest-growing market.

In March 2021, Infineon Technologies introduced StrongIRFET 2 power MOSFETs. It is available in the voltage range of 80 and 100V and is optimized for both the high and low frequencies.

Some of the prominent players in the global power electronics market include: