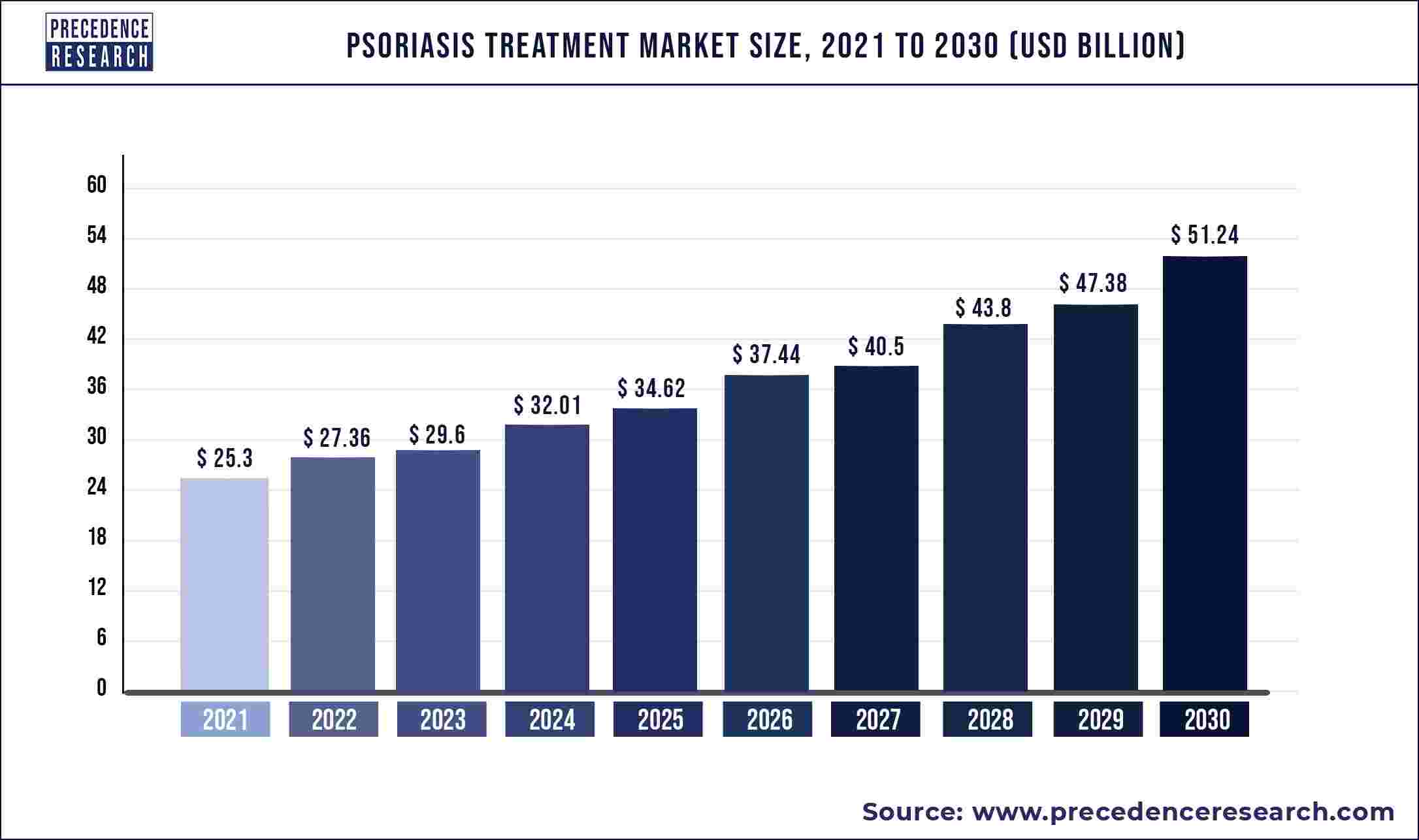 Psoriasis is a skin condition which is an autoimmune inflammatory type of disorder which is caused as a result of overproduction of tissue cells over the skin. Symptoms such as excessive dryness, itching, bleeding and local irritation are experienced by the patient over the period of time. Pricking pain and inflammation is experienced by the patient over the skin in severe conditions. the disease is categorized under two types of psoriatic arthritis and plaque psoriasis. The patients suffering with psoriatic arthritis usually present with skin conditions along with joint complaints and pain.

On the other hand, plaque psoriasis is commonly observed among the people with prominent skin conditions. The huge number of people belonging to the geriatric population has also increased the number of cases belonging to psoriasis. The extensive use of biosimilar products I have helped to boost the market to a great extent. They lucrative offers and schemes which have been provided by the insurance companies in the form of reimbursement facilities have helped to boost the size of the market to a great extent during the forecast period.

The outbreak of the pandemic had a significant impact on the psoriasis treatment market. On one hand, the follow ups and regular visit to the hospitals were restricted due to the transportation facilities and movements being hampered due to the lockdowns. On the other hand, the online retail stores showed a rising demand and supply on account of the increasing trend of online shopping among the consumers. The patients showed greater response to this system as compared to the earlier ones. Better self-care provided better results during the occurrence of the pandemic.

The impact of environmental factors on the health of the consumers were minimum which helped the market to grow significantly. The expenditure which was associated with the occurrence of the pandemic reduced the disposable income available with the people which had a direct impact on the growth of the market. The covid infection had shown its negative effects on a certain group of individuals by aggravating their skin disorders. The retail pharmacies also showed a great demand and supply during the course of the pandemic as a result all of the high-risk factors in the hospitals and clinics.

The high prevalence of skin disorders in the developed nations like North America has helped the psoriasis treatment market to show a considerable growth in this region. The rate at which the disease of psoriasis is developing in the people belonging to this region has given rise to various drives and campaigns organized by the government in order to spread awareness regarding the management and treatment of this disease. The lucrative offers and schemes which are provided by the insurance companies in the form of reimbursements has also helped to boost the economy for the psoriasis treatment market. Advanced psoriatic conditions which involved other complications such as severe hair loss and joint pains also proved to be a driving factor for the growth of the market.

With the increasing research and development carried out by the key market players in the field of therapeutics has help to boost the market to a great extent. The advancements made by the key market players has helped reduce the number of side effects which are faced by the patient after the treatment by modern medicine. This has proved to be a great driving factor for the growing market. The huge number of people belonging to the geriatric population has also proved to be a blessing for the market growth as a result of the high prevalence of skin diseases among these people. The treatment of this disease requires a very long period of time which helps the market to record a high revenue return over the period of time as a result of the constant supply and demand which is seen as a part of the ongoing treatment. In many cases this disease has followed genetic inheritance which has also proved to be a driving force for the market.

The advanced applications which have been introduced into the market have successfully provided faster results over a shorter period of time which has supported the market growth significantly. This disease has now started occurring even in the people belonging to the younger age group as a result of the modern lifestyle practices which do not include healthy food habits. As far as treatment is concerned the parental route of administration has considered to be the fastest growing segment as a result of its ease of access. This route of administration has been seen effective for treating the people belonging to the younger age groups and children. These multiple reasons prove to be the growth factors for the psoriasis treatment market during the forecast period. 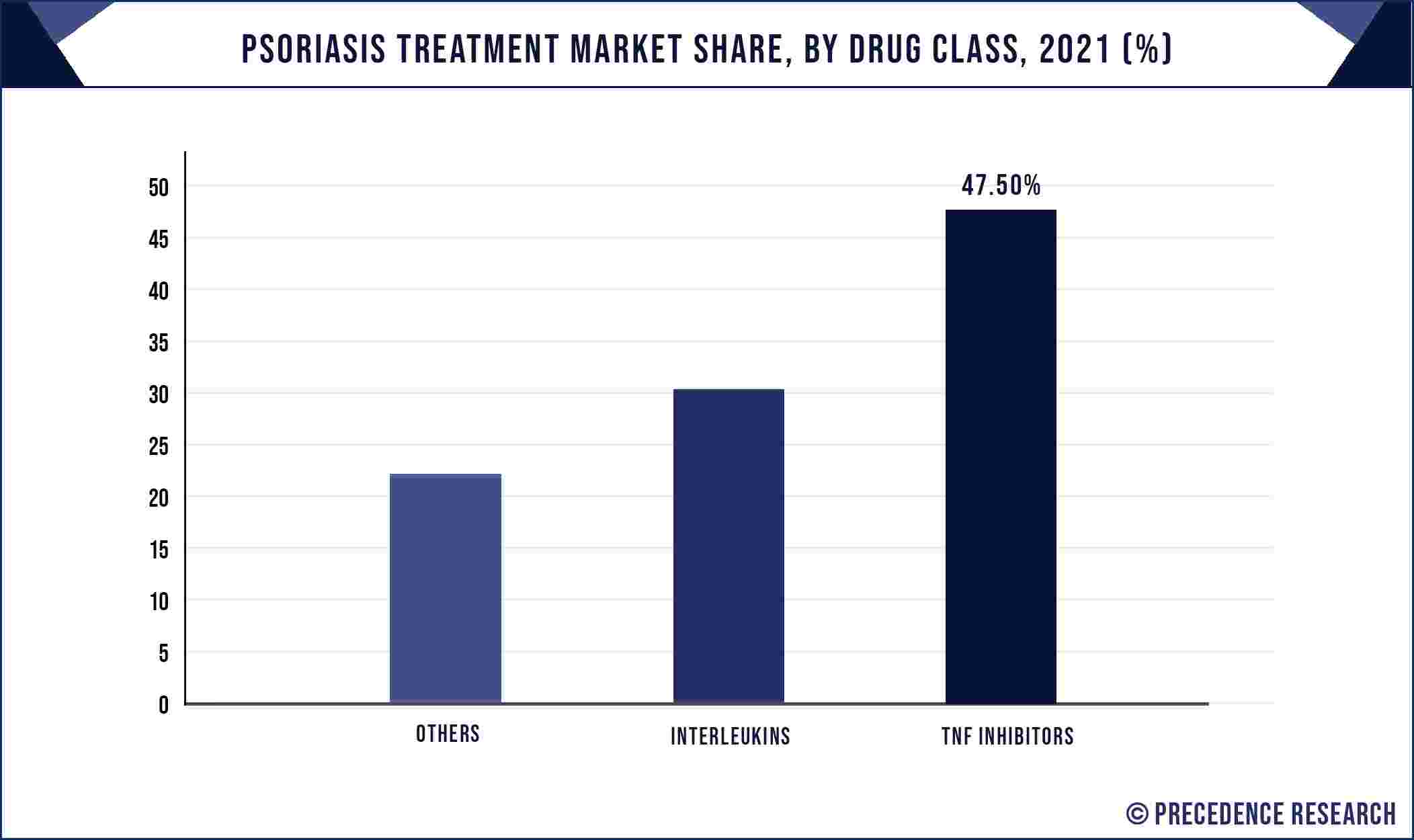 As the prices of the inhibitors are reducing rapidly because of the competition provided by the interleukins the market is expected to show a transition.

On the basis of type, the plaque psoriasis I've recorded the fastest growth as a result of its rapid prevalence in the market. A huge number of people are seen suffering with this type of skin disorder and hence it records the highest return during the forecast period. The rapid advancements which are taking place in order to treat such skin disorders have helped the market to record a tremendous growth.

Psoriatic arthritis forms the next segment under this heading which is commonly found in the people. The new products which are launched by the key market players in order to treat these diseases have proved to be the driving forces for the growth of the market during the forecast period.

On the basis of administration, the parenteral route as recorded the highest share in the market as a result of its high level of convenience. It is the easiest way of application which is considered by the people all over the world. A rapid sales and supply are observed over the counter which helps the market to record a considerable revenue. The rapid development seen in the medical industry has enhanced the confidence people have over these applications.

The oral route of administration has seen a secondary place in the market as a result of the rapid prescriptions. The rapid research and development performed by the key market players regarding these applications as boosted the size of the market considerably.

On the basis of distribution channel, the retail pharmacies have dominated the segment as a result of the huge sales and supply which is recorded by the high demand of the market. Increasing awareness regarding the available medicines and products in order to treat these skin disorders has boosted the demand and supply in the market.

On the other hand, the next segment which has shown a considerable growth is of online pharmacies which has formed the recent trend. Rapidly increasing fashion of online shopping has boosted the demand and sales of the online pharmacies. Hospitals and clinic from the next segment which shows a steady rise with the increasing number of patients in the market.

On the basis of geography, the largest market shared is held by the North American region as a result of the huge number of people suffering with skin disorders. The increasing prevalence of psoriasis among the people residing in this region has helped the market to record a significant growth. Psoriasis awareness month is a special initiative which is taken up by the government in the month of August every year in order to spread awareness regarding this skin condition and help them with the therapeutic options available in the market. With the recent advancements that have been observed in the market regarding the treatment of this skin condition rapid growth in the market size has been experienced.

Europe has proved to be the next largest market under this category and is expected to show or significant growth during the forecast period.