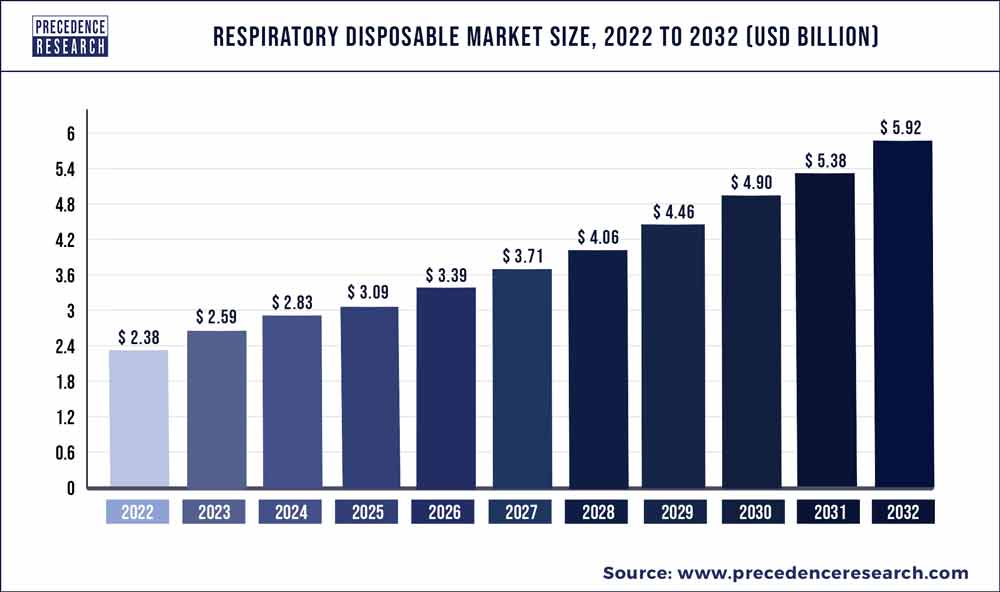 Respiratory disposable used in everyday life are disposable mask N-95 the standard mask manufactured used as the respiratory filter. Elastomeric Respirators are having replaceable cartridges. Powered air purifying respirators mostly use pump or fan and they continuously move air through a fitter and give a purified air. Respiratory devices are mostly used in a hospitals by the doctors to perform various operations and surgeries to avoid the infections and majorly used by the chronic infected patients for example asthma, tuberculosis, lung cancer, chronic obstructive pulmonary disease and many other respiratory disease. Respiratory devices are mainly utilized by neonatal, pediatric and adult. Which has raised the use of respiratory device and thrived the market to grow. As per investigation more than 69 million population is undergoing from the chronic respiratory diseases. Moreover 345 million people are suffering from respiratory disease due to increased pollution in the regions and also usage of cigarettes from the individuals which gives tobacco smoke which is hazardous to health. These are the major reasons where respiratory devices used for the healing and for the protection from the air contaminants and improving the growth of the market to grow.

Respirators involve the face piece which covers the mouth, nose, eyes and avoids the entry of contaminants. Respirators are full face forms and half face forms. Full face forms are which covers the full face and half face piece are which covers from nose to mouth. Utilization of respirators are seen in various fields pharmaceutical industries, health sectors, manufacturing companies, defense services, other industries like chemical, metals and mining, oil and gases, agriculture, civil work, power generation, automobile industry usage of the respirators increased in order with the demand of the market as a self-protection which helped to boost the market growth.

Increasing risk of infected virus, spreading of the virus from person to person which improved the demand of the respiratory devices from the market. The positive impact of covid-19 on the respiratory market. Increased hospitalization of the patients due to infected and spreading virus from person to person. Rising demand of the respiratory devices for example pulse oximeters, spirometers, nebulizers, ventilators and the most important requirement oxygen which was decreasing in the corona virus patient. Which has tremendously raised the market growth with the increasing CAGR. Due to shortage of supply of the oxygen and less ventilators number of people have lost their lives.Covid-19 has boosted to grow the respiratory disposable market.

Respiratory Deposable are majorly utilized in various fields such as Pharmaceutical Industries, health sector in hospitals by the patients and doctors who perform various surgeries and operations and come in contact with various infected patients. Used by the public for the self-protection, oil and gas industries, chemical industries,  metal and mining, food and beverages, wood work, automobile company, civil construction work, textile company, defense fighting, agriculture work, forest work. Respiratory devices are used in various sectors for the self-protection are major growth factors which have driven the respiratory disposable market high.

Due to increased demand has increased the revenue market share and imposed standardized guidelines for the development and manufacturing with increased research and development and improved advanced technologies and strategies adopted for the manufacturing and the output of the good productivity and quality of the product and uniformity of manufacturing companies and fulfilling’s the requirement of the market has boosted the respiratory disposable market growth.

On the basis of application respiratory disposable market has wide utilization in various fields. Majorly respiratory devices are used in the hospitals, by the patients with infected disease like asthma, obstructive pulmonary disease, lung cancer and many other respiratory infections used by the doctors in the hospitals during operations and the surgeries performed which has increased the market growth. Usage of the respiratory devices in industries such as food and beverages, pharmaceutical industries, chemical companies, oil and gases, power generation, metals and mining, automobile industries and many more. The development of various new advance technologies has gained the attention of the market and increased growth during the forecast period. Health sector has considerably shown rising peak and increasing economy.

Improved developments of respiratory devices has flawlessly improved the market growth due to increasing demands across the regions. Increasing respiratory disorders among the population has increased the usage of respiratory disposable in the hospitals and among the patients. Usage of the product like laryngoscope, pulse oximeters, breathing bags, tubes, resuscitators, oxygen therapy, masks and many more. It is also used in various companies and industries such as chemical, pharmaceutical industries, metals, oil and gas, power generation, automobile industries and others with improved advance technology helped the market to grow.

What is the regional impact on respiratory disposables market?