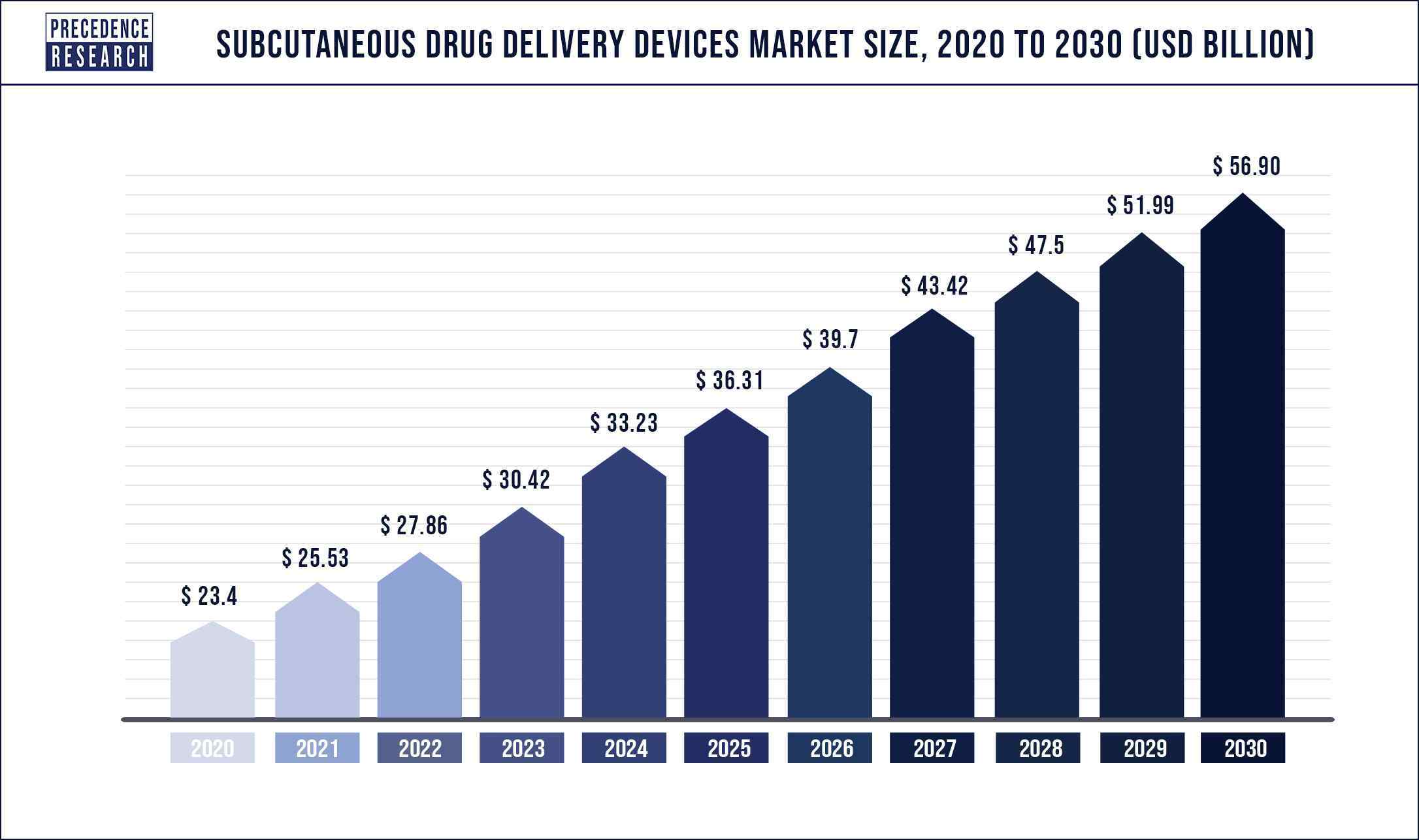 The world is witnessing a significant rise in the number of patients suffering from numerous chronic diseases such as cancer, autoimmune diseases, respiratory disorders, cardiovascular diseases, diabetes, and various other type of diseases. According to the World Health Organization, the cardiovascular diseases accounts for around 18 million deaths and it is the leading cause of death across the globe. As per the International Agency for Research on Cancer, around 19.3 million new cancer cases were reported in 2020 and this number is expected to reach 28.4 million in 2040, globally. Apart from this, the rapid growth of the biopharmaceutical industry and development of various innovative drugs in the biologics and biosimilar have exponentially supported the growth of the subcutaneous drug delivery devices market. The government authorities like FDA and EMA have played a crucial role in granting approvals to the technologically advanced drug delivery devices that helped the manufacturers to gain consumers’ confidence.

Based on the product type, the pen injectors segment dominated the market, accounting for over 37% of the subcutaneous drug delivery devices market share in 2020. This is attributed to the higher social acceptance, increased affordability of the consumers, easy-to-use feature, easy availability, and increased awareness regarding the pen injectors across the globe. The increased product approvals of the pen injectors played a crucial role in its growth. For instance, in April 2020, Sanofi acquired the US FDA approval for its new prefilled pen named Dupixent that serves the asthma, chronic rhinosinusitis, and atopic dermatitis patients at homecare. Moreover, in June 2019, Sanofi acquired the EMA approval for its ToujeoSoloStar Pens in Europe. Therefore, the new product developments and its approval by the government authorities greatly contributed towards the growth of the market.

North America dominated the global subcutaneous drug delivery devices market, garnering a market share of over 43% in 2020. The presence of developed healthcare infrastructure, presence of several top manufacturers in the region and the various developmental strategies adopted by them, and increased healthcare expenditure are several prominent factors that drives the growth of the North America subcutaneous drug delivery devices market. Moreover, the increased prevalence of various chronic diseases resulted in the huge demand for drugs and drug delivery devices amongst the population. Around 60% of the US population is suffering from one or more chronic illnesses.

Asia Pacific is estimated to be the most opportunistic segment during the forecast period. This is majorly attributed to the rapidly growing diabetic population in the region owing to the unhealthy food habits of the people. According to the International Diabetes Federation, around 60% of the global diabetic population lives in Asia. Therefore, the market players are expected to shift their focus in the Asia Pacific region. The rising disposable income, growing awareness regarding the diabetes management, and rising healthcare expenditure are the major factors that will drive the growth of the Asia Pacific subcutaneous drug delivery devices market in the forthcoming future.

Some of the prominent players in the global subcutaneous drug delivery devices market include: