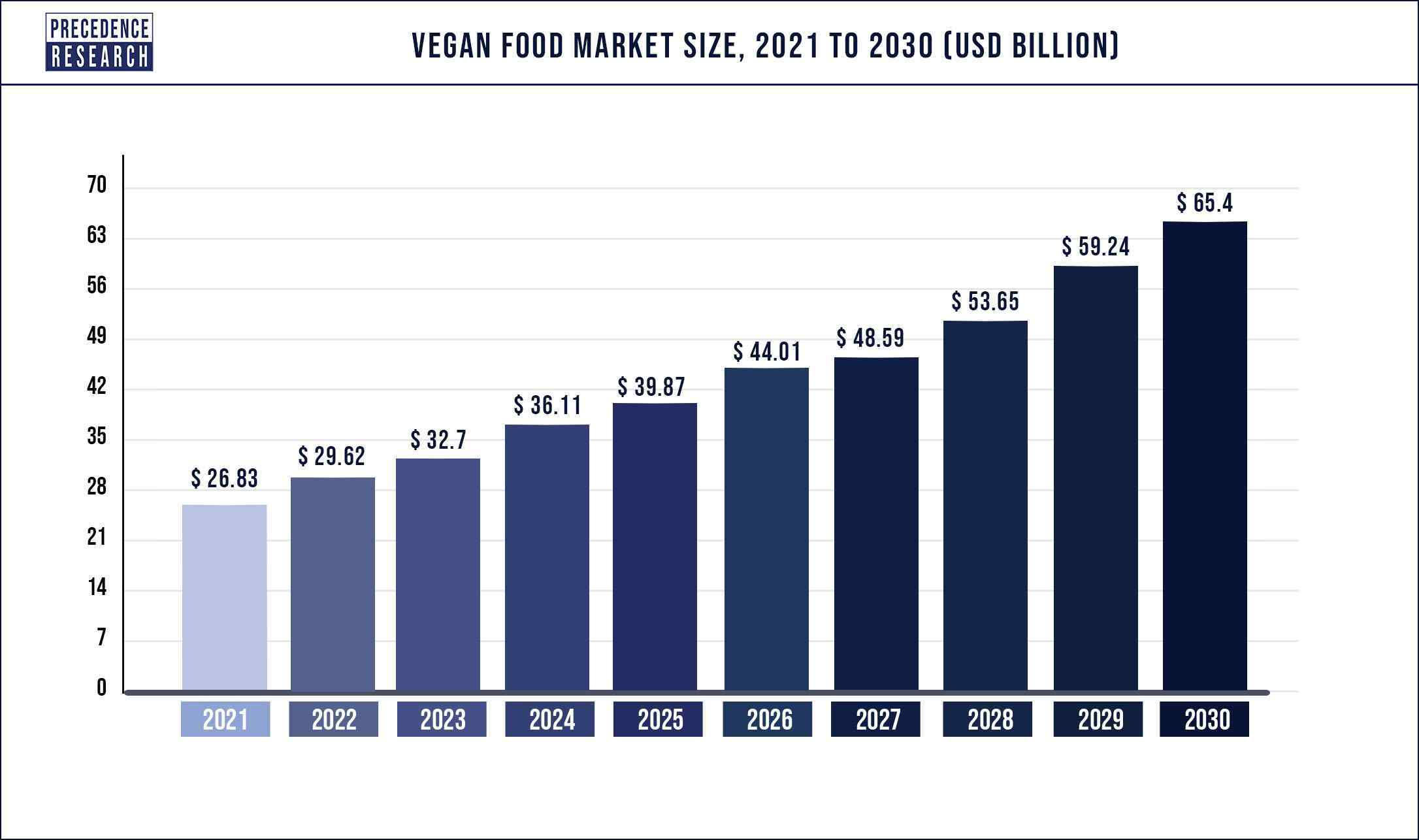 The increased awareness about benefits of the vegan diet is an important factor which is responsible for the growth of this market across various nation.  The countries in the North American region, European region and the Asia Pacific region have a large percentage of vegan population. The outbreak of COVID-19 pandemic had impacted the tiger behavior of many nations. Increased awareness about the health and well being of the individuals have played an important role in the growth of vegan market. Owing to the benefits of the vegan diet there's a shift in the purchase patterns. There is an increased acceptance of the vegan product among the young population across the globe. There is an increasing demand for alternative dairy products, meat substitutes and other food substitute which is driving the market for the vegan food. Vegan food products are derived or processed from plant based sources. Vegan food products are offered as meat substitutes which are actually healthier than meat and provide a great taste and flavor. They are primarily made from ingredients like wheat, soy and others. Dairy free products and beverages are prepared from soy, rice, coconut and almond.

Many consumers lead a sedentary lifestyle. Major population across the globe is suffering from health related complications like the cardiovascular disease or obesity. Increased awareness about animal health and animal cruelty in the food industry is encouraging consumers in order to shift to plant based food products. Vegan diet is growing popularly across many nations like US, Australia, New Zealand, UK, Australia, Ireland, Israel and Canada. American consumers have stopped the consumption of meat products. An increased awareness about the health benefits of the products that are plant based is increasing the consumer base of the vegan food industry. The other benefits provided by the plant based products are low risk of heart disease, lower risk of a stroke and premature death. An increased demand for alternative dairy products and meat substitutes it will help in adopting vegan diets. Consumers are also seeking nutritional alternatives. The market players are launching innovative and different food products in order to improve the consumer base and to enhance their image. Another reason for the growth of the vegan food market is the people who are lactose intolerant.

On the basis of the product type the alternative dairy products are rapidly increasing. The alternative dairy products segment is growing as compared to the meat substitutes. They comprise of soy, elements and oats or other similar products. These products are beneficial for people who want to lose weight and also suitable for lactose intolerant people. Increased awareness regarding the health benefits of vegan products is expected to drive the market for this segment. Dairy alternatives was the largest segment till the recent years. About 65% of the global population is lactose intolerant and this also happens to create a demand for dairy alternative food items. The other products offered by the dairy alternatives or cheese, yogurt, snacks and ice cream which help in attracting the non vegetarians and increase the demand for this segment. The major market players are focusing on increasing the product portfolio as there could be rising cases of lactose intolerant people.

On the basis of the distribution channel the offline segment had the largest market share in the recent years. The offline segment is expected to maintain its dominance over the forecast period. The offline segment involves many convenience stores, hypermarket, supermarket and other specialty stores. There is an increase in the number of supermarkets and hypermarkets across the globe that are helping in the sales of the product. Do to easy access and availability of vegan products in the brick and mortar stores the consumers prefer shopping from these stores. 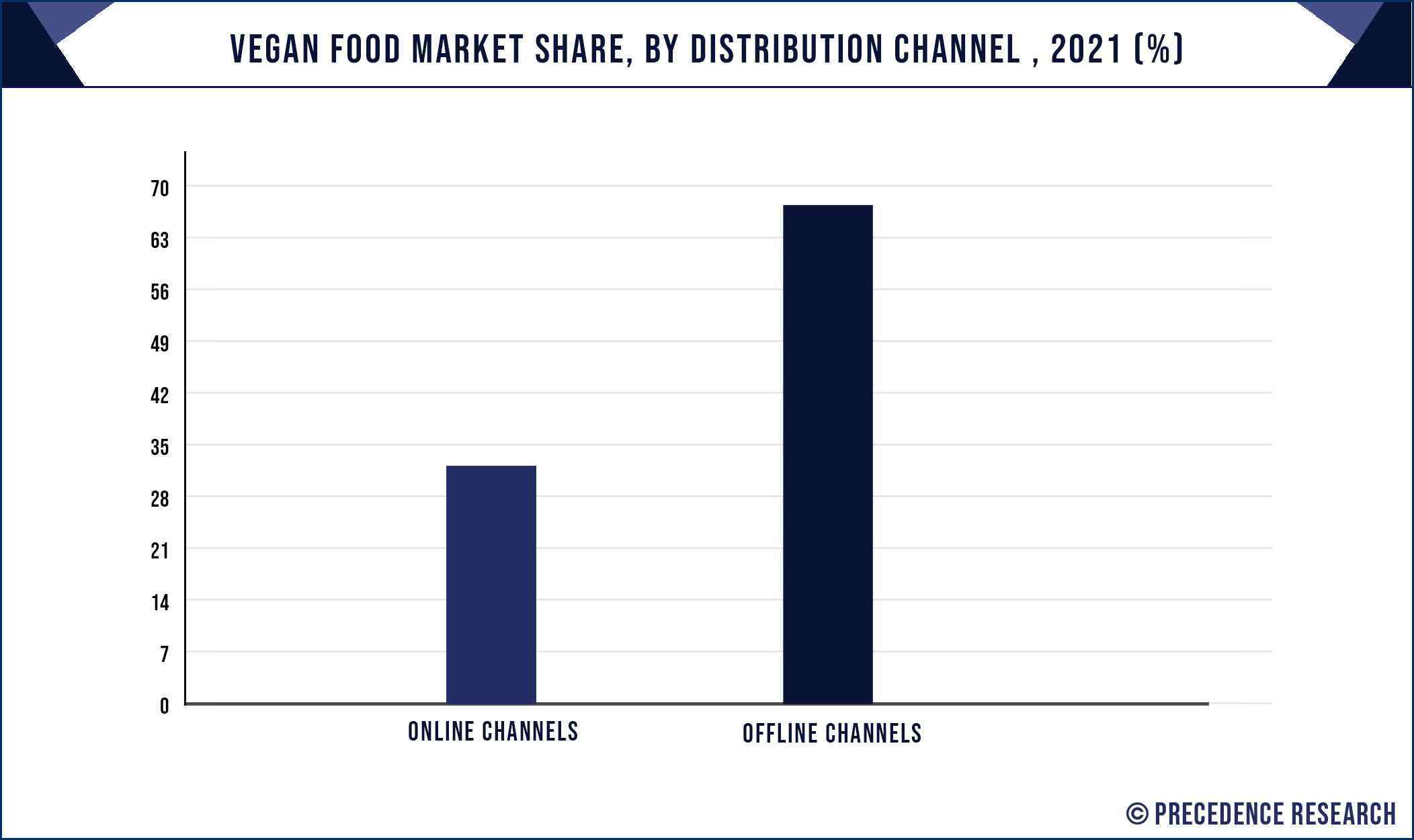 The online stores are also expected to see a great boost during the forecast period. There has been major investments in online distribution channels by the major retail chains. Walmart has started delivering foods online. Many leading retail corporations that are multinational have started delivering food online. Due to the pandemic the ecommerce portals have become a major channel which is adopted by the consumers to buy these products. The access to these products from the comfort of the home and getting delivered them to the doorstep are increasing the trend for online shopping.

North America is a leading global vegan food market as an increased awareness about animal cruelty. The awareness about the food industry and its impact on the environment is leaving to a growth in this market. Increased number of lactose intolerant people in US is fueling the demand for alternative dairy products in US. The North American region and the European region have the same purchasing pattern. The increased awareness about veganism is also increasing the revenue for the vegan restaurants in these regions. Major food chains like Starbucks and Domino's have launched vegan products in order to capture the consumer base in Europe. The number of vegan consumers in Europe is rising. Major market players in this region are trying to launch new innovative products in order to bring down the prices of the products and to improve the quality of these products.

Asia Pacific is expected to registered the growth at a CAGR of 13.5% from 2022 to 2030. As the younger generation in the Asia Pacific region is also aware about the climate and its association with the consumption of meat the demand for vegan products will rise in this region. The number of vegetarians in India is more but adopting an animal free diet is still low in this country. The availability of cruelty free products and the awareness about the same will play an important role in helping the growth of the vegan market in this region.