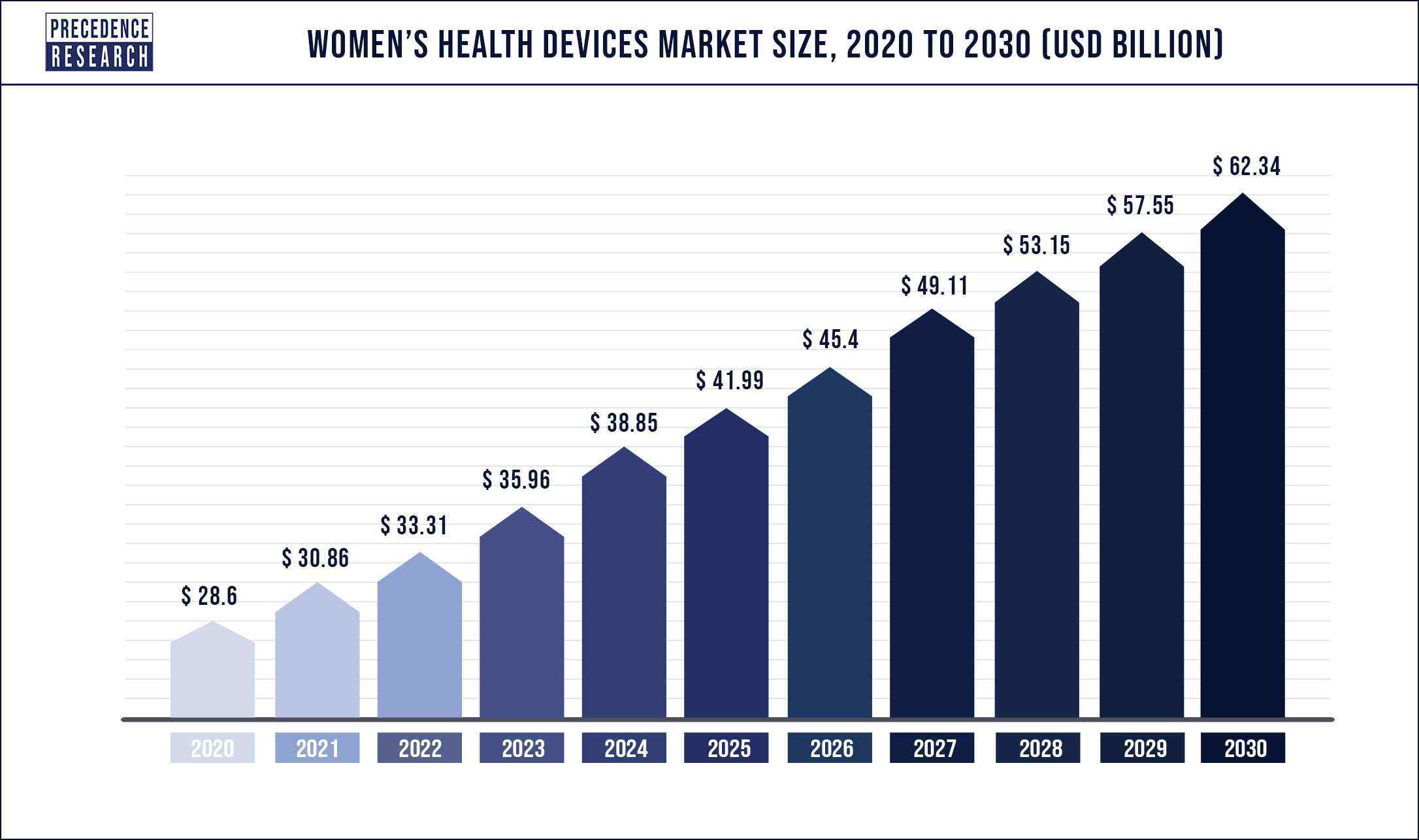 The lack of awareness regarding the female genital health and sanitization along with the underdeveloped healthcare infrastructure in the developing and the underdeveloped markets is presenting a huge growth opportunity to the market players. Furthermore, the rapidly growing geriatric population is expected to drive the market growth in the foreseeable future. According to the World Health Organization, the global geriatric population is expected to reach at 2 billion by 2050. Moreover, improving gender ratio in the developing nations owing to the government initiatives is expected to foster the growth of the women’s health devices market in the forthcoming years. Further, the rising complications related to the women’s fertility owing to the delayed marriage and pregnancy is fostering the demand for the women’s health devices across the globe. Rising government initiatives regarding the women empowerment and women health especially in the developing countries like India is resulting in growth of the women’s health devices market. The rising expenditure of the medical devices manufacturing companies for the development of the women focused health and medical devices is significantly fostering the growth of the market across the globe.

Based on the application, the global women’s health devices market was dominated by chronic diseases segment. The various chronic diseases such as cancer, diabetes, cardiovascular diseases, and various others is rising at an alarming rate among the women owing to changing lifestyle, physical inactivity, and changing food habits. Cancer is the most dominant chronic disease among the female population. The rising burden of breast cancer, colorectum cancer, ovarian cancer, and lungs cancer among the women population has significantly contributed towards the growth of this segment across the globe.

The pelvic & uterine health is estimated to be the most opportunistic segment during the forecast period. According to the UCLA Health, one in three women are affected with the pelvic floor disorders once in their lifetime. The rising prevalence of the pelvic floor disorder, rising awareness regarding the vaginal disorders, and increasing prevalence of the urinary and fecal incontinence among the women population are the major factors that are expected to drive the growth of this segment during the forecast period.

The hospitals & clinics segment dominated the global women’s health devices market in 2020. This is simply attributable to the increased preference for the hospital services among the population for receiving treatment for majority of the diseases. The increased penetration of public and private hospitals, rising number of private clinics, strong and developed infrastructure for treatment and diagnosis at hospitals, and availability of special wards for serving women at hospitals are the major factors that has fostered the growth of the hospitals & clinics segment.

The Asia Pacific is estimated to be the most opportunistic market during the forecast period. The increased government initiatives to promote gender equality in the nation like India and China have resulted in a surge in the women population. Moreover, the rising participation of women in the workforce is resulting in the increased disposable income of the women. Apart from this, the improving access to healthcare infrastructure is boosting the growth of the women’s health devices market in Asia Pacific. The rising prevalence of various chronic diseases such as cancer, diabetes, cardiovascular diseases, and respiratory disorders among the women population is expected to augment the growth of the Asia Pacific women’s health devices market.

Some of the prominent players in the global women’s health devices market include: