The internet's increasing adoption and the burgeoning video game industry serve as the market's main propellants. During the projection period, the AR & VR market will experience strong growth due to the expanding applications of augmented reality and virtual reality in industries such as healthcare, retail, entertainment, media, manufacturing, aerospace, and the military. 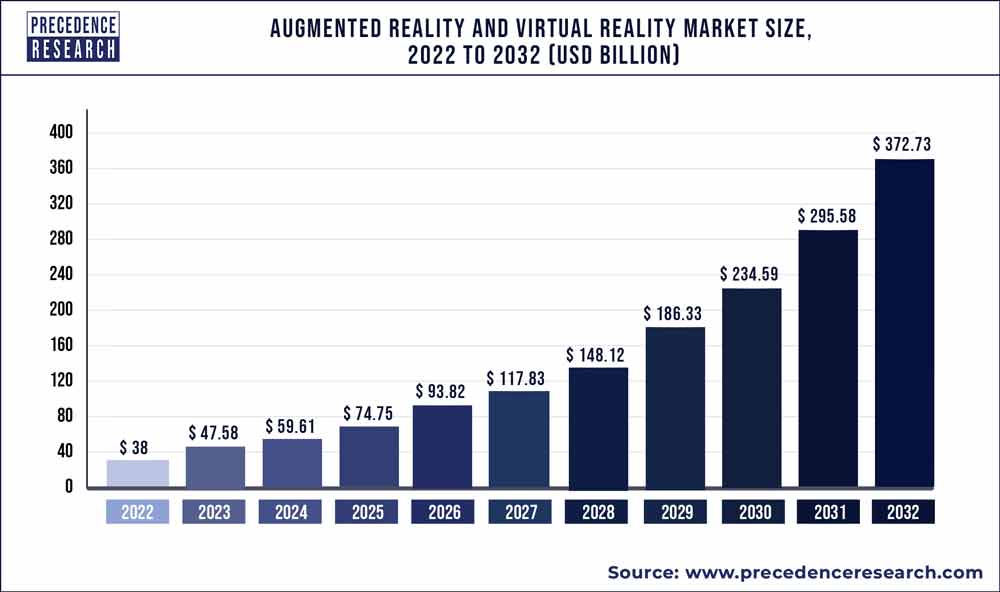 The potential of augmented reality technology to transform interior navigation. For instance, the software development company MobiDev has transformed interior navigation using AR technology. With the aid of the company's ARcore technology, the best path to the target location may be suggested and displayed on a mobile device. When it comes to outdoor navigation, augmented reality (AR) technology can assist tourists in finding tourist attractions and suitable lodging via AR-based virtual tours. For example, Hub Hotels by Premier Inn uses augmented reality technology to turn its rooms into city maps that direct visitors to the area's top attractions. In light of this, the travel & tourism industry's established players are anticipated to increase their demand for AR-based solutions, ultimately fueling the market's expansion throughout the research period.

Report Scope of the Augmented Reality and Virtual Reality Market

The sector of gesture control devices contributed significantly to revenue in 2021 and is anticipated to expand steadily during the forecast period. Users may operate gadgets and move items in virtual reality with their hands and other body parts thanks to gesture-based interfaces and technologies. Compared to simple user interfaces like the keyboard and mouse, it builds a deeper connection between computers and people. Adopting high-efficiency gesture control devices has advantages that have been recognized across a variety of businesses and sectors. In contrast to an easier-to-use built-in system and a decreased chance of causing an accident by enabling drivers to maintain their eyes on the road, a hand gesture recognition system enables doctors to modify digital pictures during medical operations. These benefits have drawn significant market players, which is promoting this industry's expansion.

In 2021, the hardware sector had the greatest revenue share with 59.8% share, and it is anticipated that it would continue to rule the market over the projected period. The hardware sector is dominating the market thanks to the expanding use of AR devices across several sectors and industrial verticals, including education, healthcare, construction, and retail. For instance, the medical solutions provider AccuVein Incorporated is leveraging AR-based solutions to help medical practitioners locate a patient's vein so they may give intravenous treatments or take blood for testing, among other things. As more businesses make aggressive investments in contemporary AR solutions and products, the demand for gear that supports augmented reality (AR) does not appear to be slowing down. 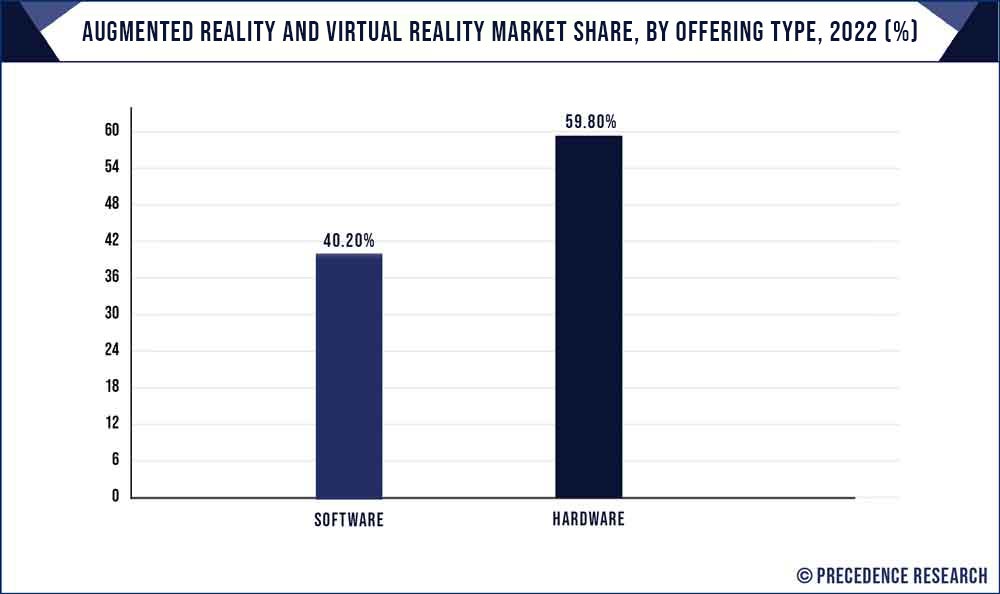 During the projection period, the software segment is anticipated to grow at the highest CAGR of 41.8%. Due to the pandemic's onset, augmented reality technology is becoming more prevalent in everyday life. For instance, the touchless and immersive experience made possible by AR technology is good news for both remote workers and students. As augmented reality (AR) technology develops further, mobile devices may now simply and conveniently use it. To create straightforward yet comprehensive AR solutions, developers are making use of the increased processing power made possible by the most recent hardware and software.

Due to advancements in technologies like AR and VR, the gaming and entertainment industries were the first to profit from and fully realize the promise of digital reality, evolving into an immersive and interactive form of entertainment. AR and VR have revolutionized everything from improved gaming simulations to fresh television and smartphone applications. The video-based immersive media sector, which focuses on improving and producing films, television shows, and other types of material, includes virtual reality as a significant component. While AR has been shown to be a game-changer and lucrative immersive technology that will benefit the gaming and entertainment sectors in the long run, VR has gained a lot of momentum owing to its very immersive qualities. Smartphones with camera filters frequently employ augmented reality (AR) technology on social media platforms like Snapchat, Instagram, and Facebook. These filters apply filters depending on what is seen via the camera using computer vision technology that employs an active shape model for classifying objects and a human face recognition component.

In 2021, Asia Pacific is expected to hold a sizable market share for VR and see quicker growth than the rest of the world. Due to the fact that a few nations in the region, such as China, Japan, and South Korea, have been concentrating on training, medical assistance, and e-learning for customers with the use of virtual reality technology, the market share for virtual reality in the Asia Pacific region was significant in the base year, or 2021. However, nations like India are still on the cusp of beginning to adopt new technologies and incorporate them into various industries, which also suggests that the region would have a quicker development rate in the virtual reality market over the projection period.

The stocks of AR and VR devices, as well as the makers and suppliers of their component parts, have been unsettled and disrupted by the breakout and propagation of COVID-19. For instance, the COVID-19 outbreak in the US prompted lockdown measures that included the closure of production facilities and warehouses and had an impact on numerous businesses' international exports and shipments. The COVID-19 pandemic-related lockdown measures that were issued in a number of nations across the world also caused a drop in inventory levels among the vendors of AR and VR device components. However, the abrupt shift in work culture toward online platforms led to a surge in the AR and VR industries.