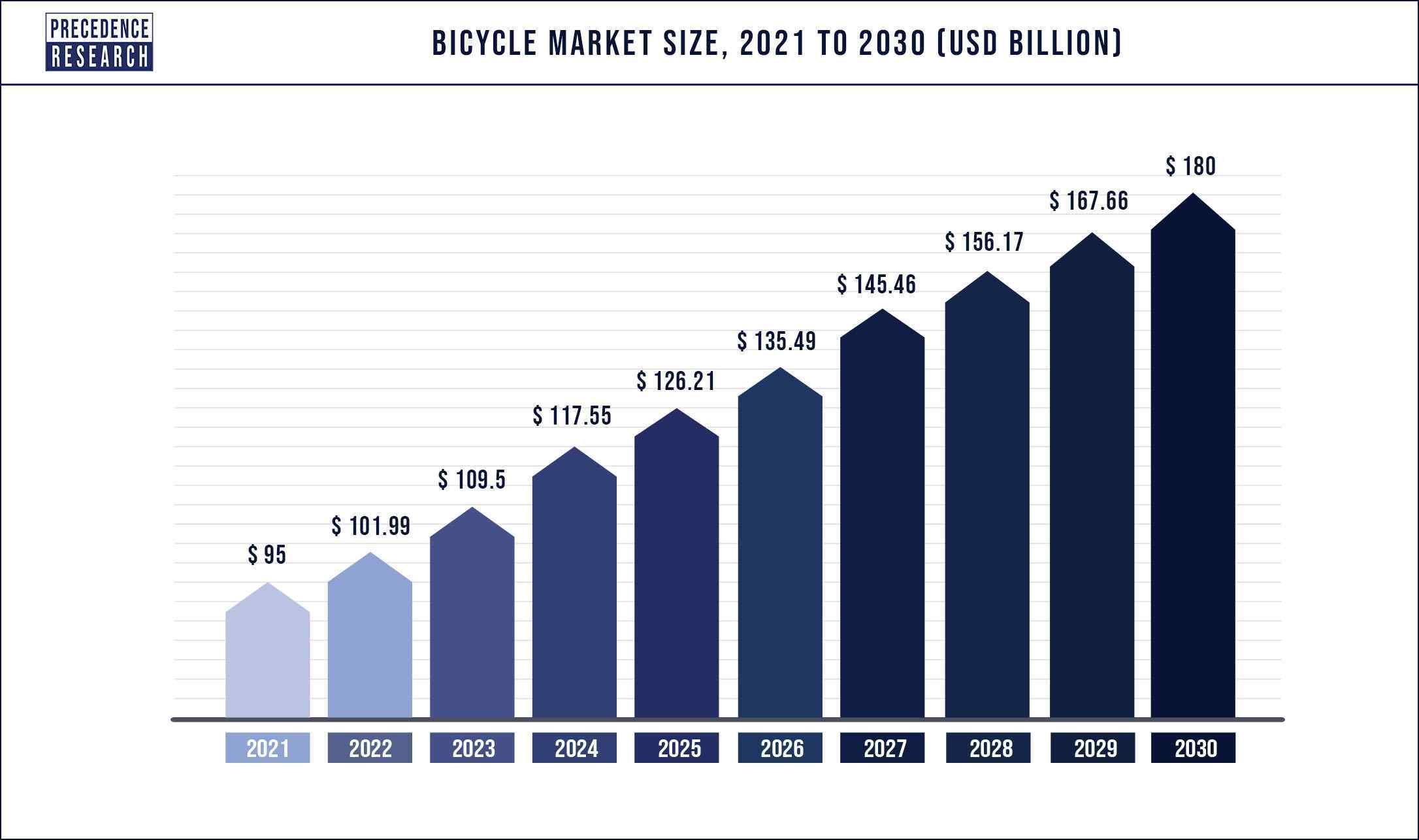 The rising preferences among the consumers for bicycle as a form of leisure are expected to boost the growth of the global bicycle market. Bicycles are a convenient form of exercise and it is highly demanded among the consumers to ensure active and healthy lifestyle, obesity free life, and free from various diseases. The rising awareness among the population regarding the health benefits of riding bicycle is boosting the demand for bicycles across the globe. Moreover, the dockless bicycle sharing systems are gaining a rapid traction among the population which is expected to boost the growth of the global bicycle market. The bicycle sharing systems provide users to locate nearby bicycle and unlock electronically. The dockless bicycle sharing systems has originated in Europe and is gaining rapid popularity in developing regions like Asia Pacific. The proliferation of digital technologies and rising penetration of internet and smartphones across the globe has led to the advancements in mobile application development and the GPS systems which plays a significant role in the development of the dockless bike cycle sharing system. The rising investments by various companies in the bicycle sharing systems in various regions are expected to drive the growth of the bicycle market.

The events like Ronde van Vlaanderenare and Tour de France are spreading awareness regarding the benefits of bicycling among the people. Consumers are increasingly adopting bicycles as a regular form of exercises to fight against obesity. The rising incidences of obesity across the globe are a prominent factor behind the rising demand for the bicycles. According to the World Health Organization, over 1.9 billion adults aged 18 years or above were overweight in 2016. About 650 million out of it were obese. Therefore, a significant rise in the obesity in the global population is expected to boost the demand for the bicycles in the upcoming future.

Report Scope of the Bicycle Market

The conventional segment captured a market share of around 81% and dominated the global bicycle market in 2021. The conventional bicycles are cheaper, involves low maintenance cost, and it is convenient as compared to the electric bicycles. This is a major factor behind the huge revenue share of the conventional bicycles. Apart from a convenient mode of transport, the bicycling is emerging as a popular sport and a form of leisure across the globe. In terms of technology, the bicycles for women is the leading the bicycle market all over the globe. The rising government expenditures and rising government initiatives to construct a separate route for bicycles and promote the adoption of bicycles is expected to boost the growth of the global bicycle market significantly in the forthcoming years. 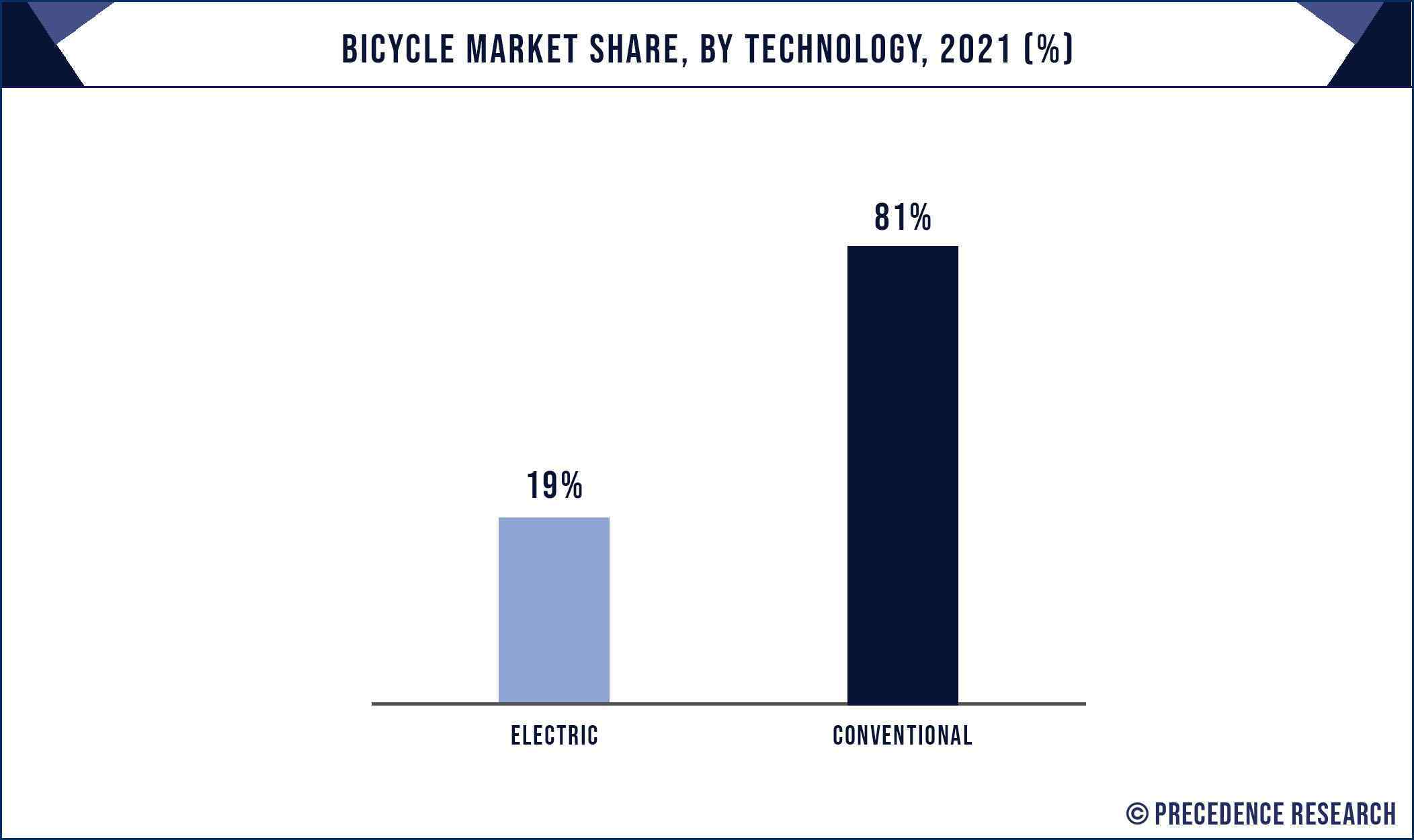 Based on the product, the road bicycle segment constituted around 41% of the revenue share in 2021 and dominated the global bicycle market. The road bicycles are the basic bicycles adopted the consumers that do not requires any special accessories as required in mountain, racing, and other bicycles. Most of the consumers also tend to customize their bicycles as per the need and the customizability associated with the road bicycles has led to its higher demand across the globe. Hence, this segment is expected to retain its dominance throughout the forecast period.

Cargo bikes segment is expected to be the fastest-growing segment during the forecast period. The rising adoption of the bicycles in order to replace the use of motorized vehicles for short distance applications is boosting the growth of the cargo bikes across the globe. 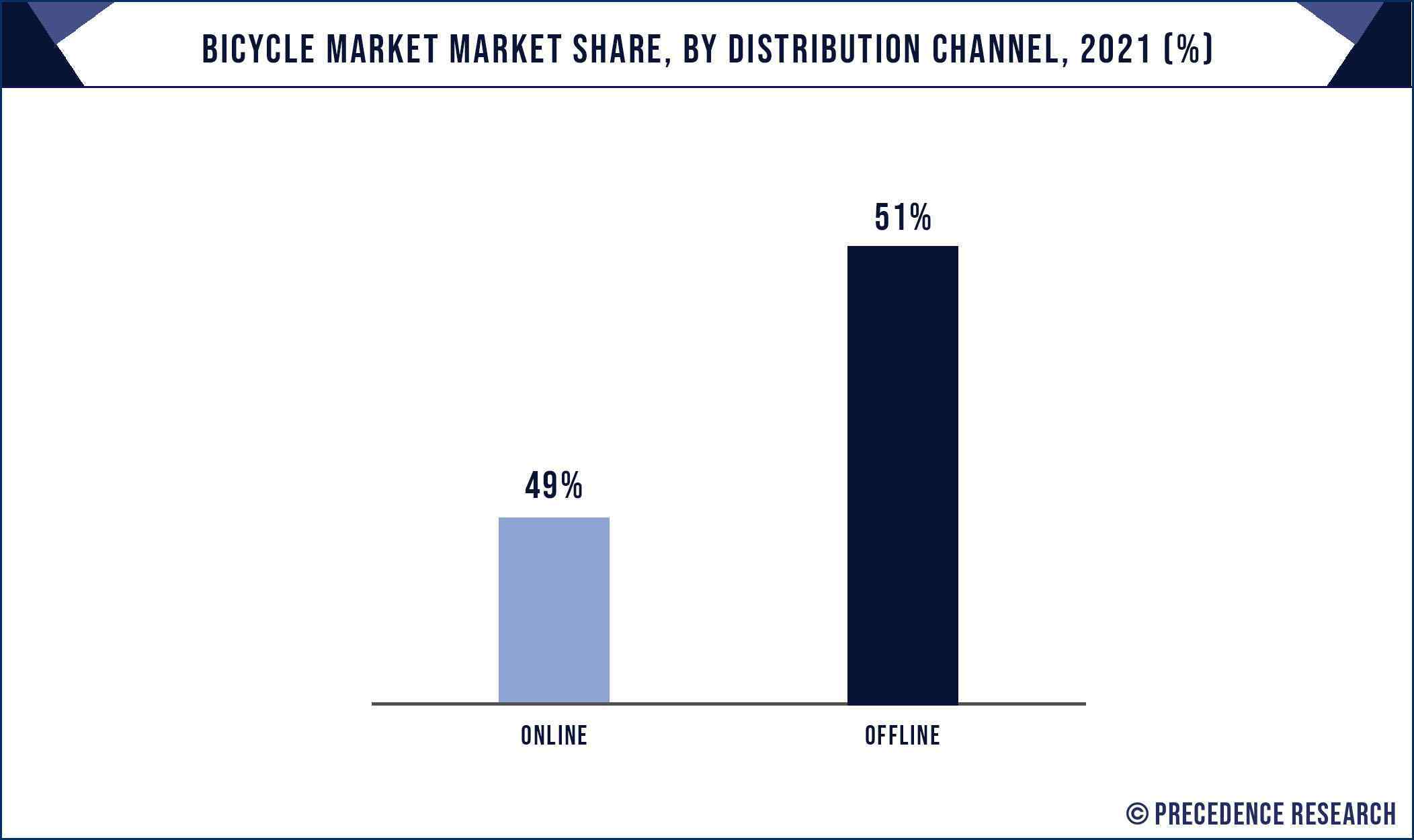 On the other hand, the online channel is expected to be the most opportunistic segment during the forecast period. The growing penetration of the internet, rising adoption of smartphones, growing number of internet users, free home delivery, easy return and replacement, easy payment options, and huge discounts offered by the online retailers are the prominent factors that are significantly driving the growth of the online sales channels across the globe. According to the International Telecommunications Union, around 64% of the global population had access to the internet in 2021 and this number is expected to grow significantly in the upcoming future.

Asia Pacific accounted for a market share of around 31% and dominated the global bicycle market in 2021. The various nations in Asia Pacific like Japan, China, and Singapore are investing heavily in the development of the necessary infrastructure that supports and encourage commutation through bicycles. The high number of road traffic accidents is the major restrain that may hamper the growth of the bicycle market in Asia Pacific region. The presence of huge youth population and rapidly ageing population in this region are becoming aware regarding the health benefits of bicycling and the rising disposable income and growing desire to remain healthy and fit is boosting the demand for the bicycles across the Asia Pacific region. 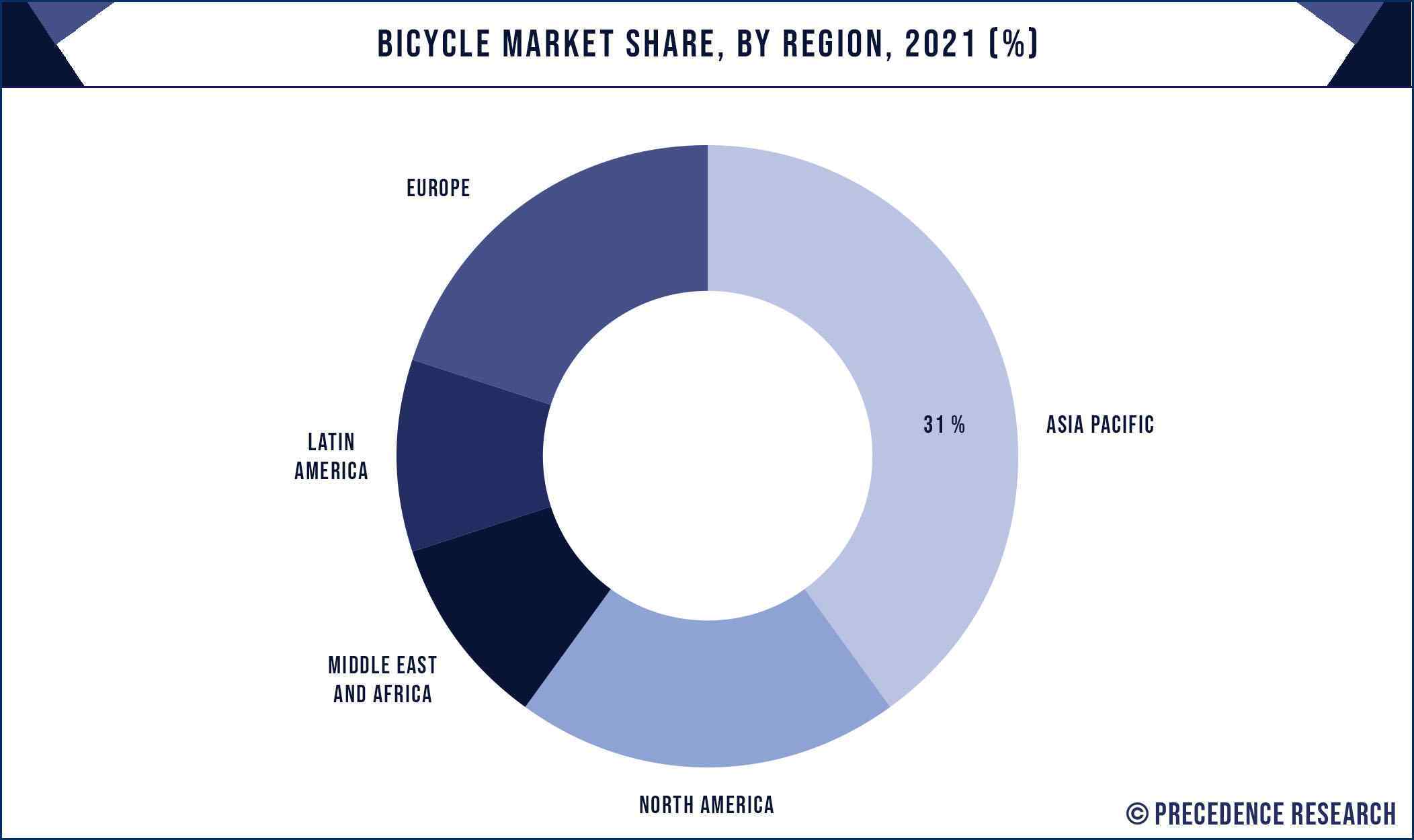 Europe is expected to grow at the highest CAGR of 10.5% during the forecast period. This growth is attributable to the presence of supportive infrastructure in several cities that encourages the adoption of bicycles. Furthermore, the events like Ronde van Vlaanderenare and Tour de France contribute significantly towards the adoption of the bicycles among the consumers. Various European nations like Denmark, Italy, Belgium, and France are rolling out bicycle-friendly infrastructure that promotes commutation through bicycles. The rising concerns over the carbon emission from vehicles and rising incidences of overweight and obesity is further fueling the demand for the bicycles among the European population.

Some of the prominent players in the global bicycle market include: