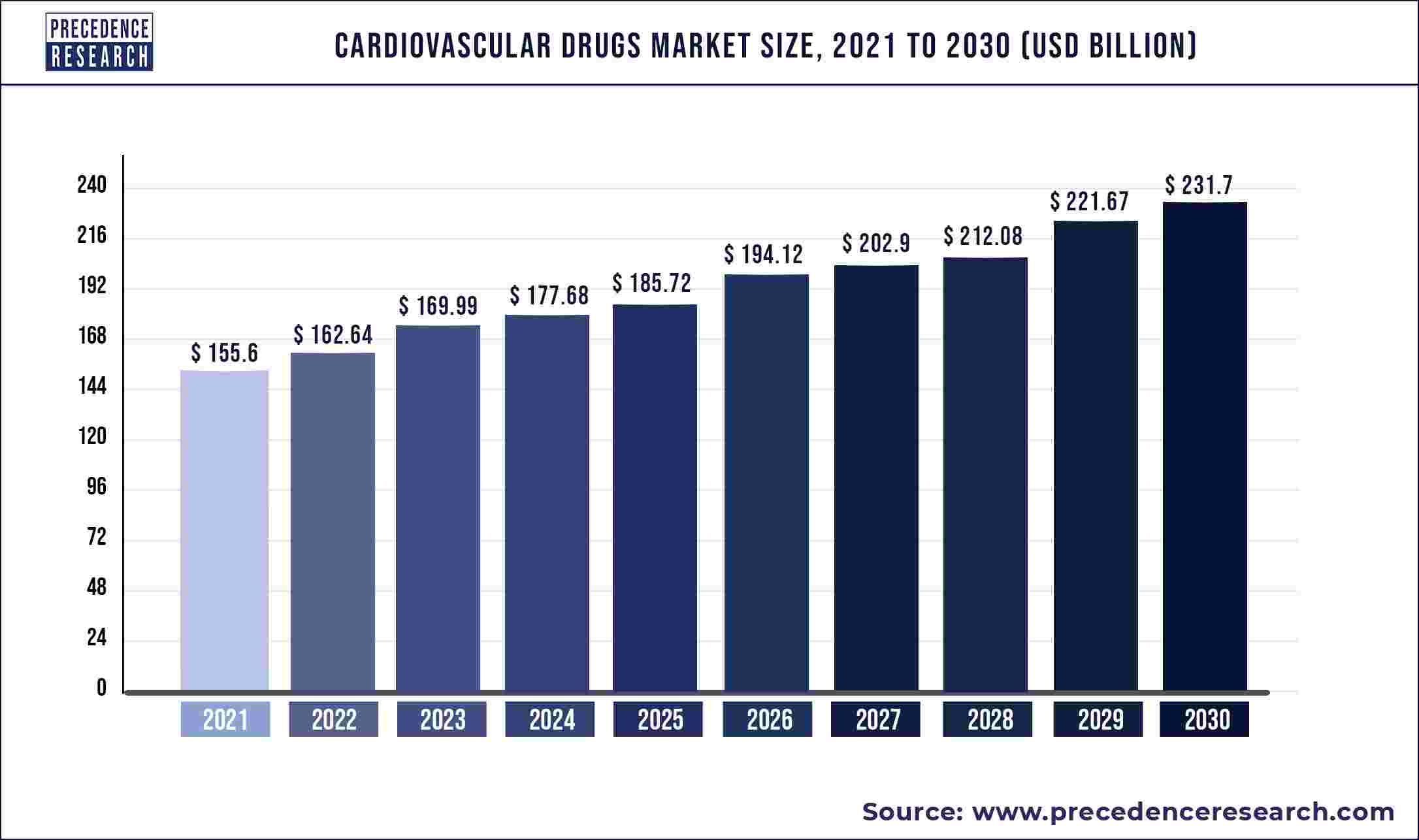 The high court associated with the use of advanced technology and medicines in the market for the cardiovascular drugs has seen or drop in the developing nations, where the disposable income of the people is very low. The developed nations possess a high disposable income which helps the market to record a higher revenue return from them. Lack of awareness among the people regarding healthcare facilities that are available for the common people lead to delay in the treatment of life-threatening conditions of the patients with cardiovascular disorders.

The occurrence of the covid 19 pandemic had shown a considerable impact on the growth of the market as a result of the restricted movements and constant lockdowns imposed by the governments worldwide. Hence, the hospitals faced a shortage of general patients presenting cardiovascular complaints. Also, with a view to avoid further risk of cross infection to the people, hospitals opted for elective procedures and checkups which hampered the regular follow-ups and checkup routines of the patients. This had a direct impact on the cardiovascular drugs market.

Moreover, the occurrence of the pandemic did benefit the cardiovascular drugs market, as a result of the increased cardiovascular complications due to the covid infection which led to clotting disorders in the patients. These complications increased the sales and supply-chain of the cardiovascular drugs market and thus facilitated its growth. With the shortage of medical facilities created due to the corona crisis had hampered the demand and supply chain of the market. Though, the supply was somehow completed as essential services were allowed to be transported. Lack of transportation facilities had hampered the growth of the market tremendously. These factors proved to be a challenge to the growth of the market during the covid crisis.

Another factor that helps the market to show a significant growth is the habit-forming nature of the drugs, which does not allow the consumer to discontinue the medications for a considerably long period of time. This keeps the revenue generation system running without interruptions. Rapid increase in the amount of stress and frustration among the people as a result of working from home has also created a number of cardiovascular diseases.

The various complications and side effects that are associated with these cardiovascular drugs help to increase the sales and demand of the other accessory drugs that are required to manage and balance these side effects. The cardiovascular drugs being an essential necessity for the people, finds its place in the disposable income of an individual which keeps the revenue return running under all circumstances. The minimum age for a cardiovascular disorder has reduced tremendously which makes it a very profitable situation for the growth of the market.

On the basis of drug type, the antihypertensive drugs have dominated the segment as it is the most common disorder that people are seen suffering with as a result of the high amount of salt intake and age-related disorders. The increasing stress among the people as a result of work and frustration has also increased its prevalence in the society. 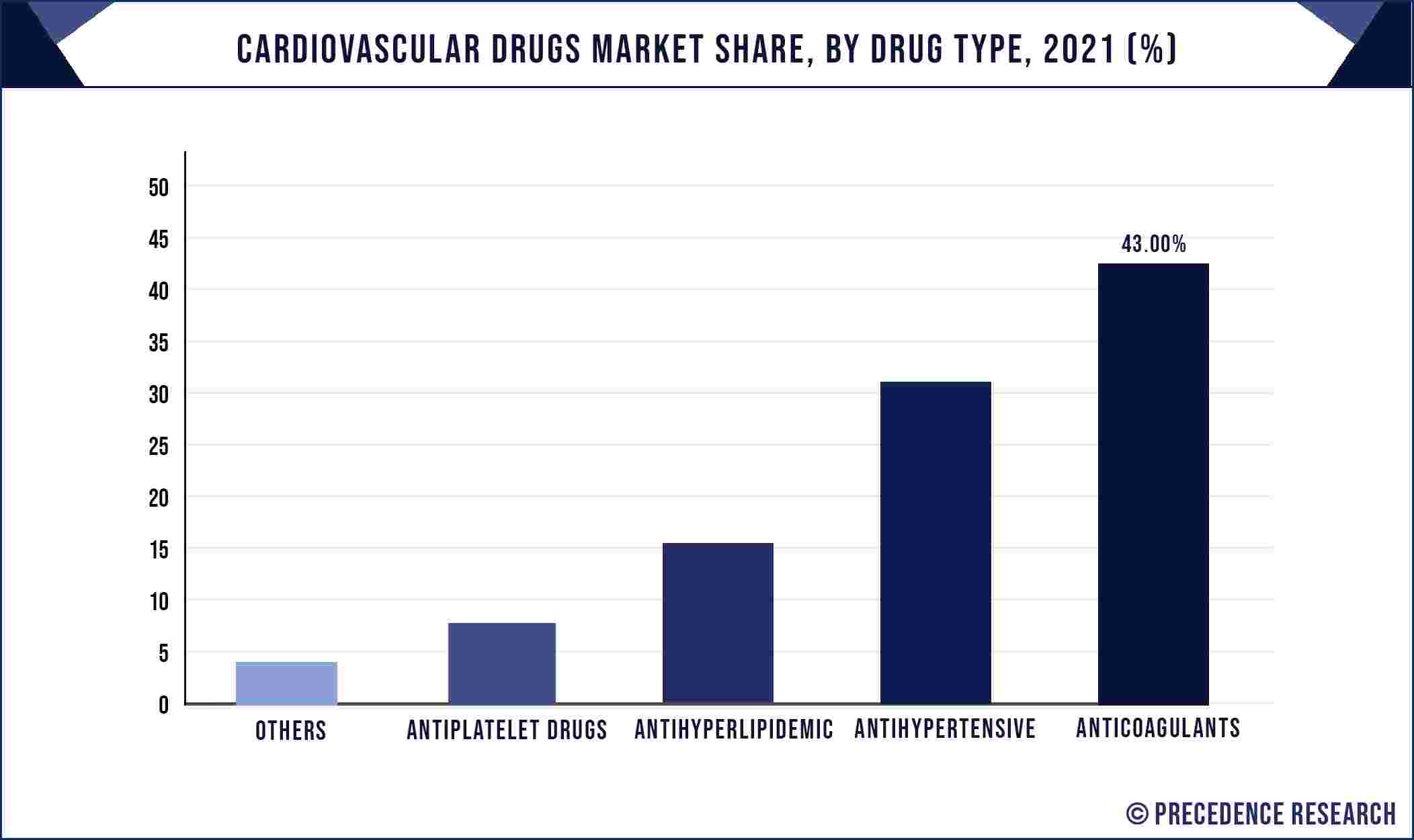 These drugs form a habit among the consumers which makes them purchase these drugs again and again, thus boosting the market size over the period of time. The prevalence of cholesterol has increased the use of antihyperlipidemic drugs which shows a rapid growth. Anticoagulants forms the next segment which too records a considerable growth as a result of increasing prevalence of cardiac arrest among the people.

On the basis of disease indication, hypertension has dominated the segment as it is the most common disease that people are seen suffering with as a result of the high work pressure among the youngsters and the age-related disorders which are caused in the geriatric population. Lack of physical activity also gives rise to a number of diseases. Higher intake of fast foods and salt has increased the prevalence of hypertension.

Retails stores form the next segment which shows the fastest growth as a result of its easy accessibility to the common people. Online stores too show a considerable growth with the increasing trend of online shopping. The demand for contactless delivery services of drugs has boosted the demand for cardiovascular drugs through online stores which also provides a wide range of lucrative discounts and offers to the consumers in order to attract them. The availability of a ready comparison between the other available drugs also helps the consumer to make a suitable choice of drugs.

The North American market has shown the highest growth as a result of the high prevalence of cardiovascular diseases among the people. With the growing modernization and increased trend of fast food the prevalence of hypertension and other cardiac diseases have increased. The sedentary lifestyle practices followed by the people which is clubbed with faulty food habits has increased the chances of cardiovascular diseases which boosts the demand for these drugs.

By Mode of Purchase