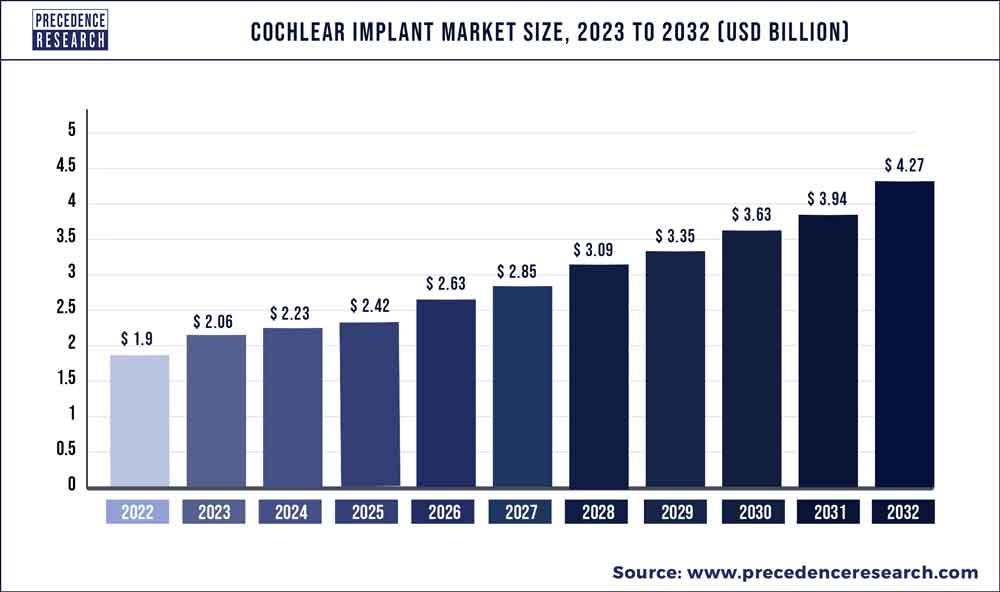 The market is anticipated to develop as a result of the rising prevalence of hearing loss and the rise in usage brought on by technical improvements. Four hundred thirty million individuals worldwide, or 5.0% of the population, receive rehabilitation services to help with hearing loss, according to World Health Organization (WHO) estimates from 2021. By 2050, over 2.5 billion people will likely have hearing loss.

Numerous factors, such as uterine infections, heredity, birth hypoxia, ototoxic medications, cerumen impaction, and others, have contributed to the current rise in hearing loss. Hearing aids, Cochlear implants, and other technology aids can be helpful for these patients. Cochlear implants are becoming more popular due to favorable reimbursement, minimally invasive treatments, and technological developments.

The government and numerous organizations are launching programs to encourage cochlear implant research. For instance, at the 2022 American Academy of Audiology (AAA) meeting in March 2022, the American Cochlear Implant (ACI) Alliance presented research and clinical practice to the other community members. The purpose of the conference was to facilitate networking among colleagues, keep attendees informed of new advancements in the audiological field, and stay current on knowledge that is likely to help the market for cochlear implants grow.

The market for cochlear implants is also likely to expand due to the growing elderly population. According to the Globe Health Organization (WHO) projections, there will be 1.4 billion people in the world who are 60 years of age or older by the year 2050. A rise in the population's average age is likely to assist the sector as hearing ability declines.

When COVID-19 initially surfaced, restrictions on audiology surgery and therapy services were implemented. During neurotological (a subset of ENT) procedures, there was a higher risk of viral contamination due to drilling in the mastoid cavity. As a result, patients had to undergo COVID-19 testing before the surgery, which prolonged the surgical process.

Additionally, children with cochlear implants need auditory-verbal therapy (AVT) for at least the first two years after the implantation to develop their speech-language abilities and better absorb auditory information. The post-surgery rehabilitation appointments were also postponed or canceled. However, surgery gradually recommenced at varying rates due to various countries' upliftment of COVID-19 restrictions. Telemedicine assists in the gradual recovery of audiology procedures and treatment from the negative effects of COVID-19.

Due to increasing investment and telemedicine support, the market is steadily returning. For instance, Cochlear Ltd. gained FDA certification for the Remote Check Solution in the United States in April 2020. The Nucleus 7 Sound Processor users who have cochlear implants utilize it as a tool for telemedicine patient assessment. They can use the Nucleus Smart App to perform several hearing evaluations.

The market for cochlear implants is likely to expand significantly owing to the increased acceptance of various cochlear implants, the incorporation of cutting-edge technology into existing products, and the number of initiatives the government and other organizations takes to support cochlear implant research.

The cochlear implants market is likely to have slow development due to several factors, including the problematic regulatory clearance process for the devices and the high cost of surgical procedures and implants.

The COVID-19 epidemic had a negative impact on the audiology industry. The pandemic hampered global logistics and supply chains, which made it more difficult for businesses to conduct their operations, including obtaining raw materials, producing goods, and distributing and selling them.

The decline in surgeries affected the demand for hearing implants as a whole. For instance, the pandemic caused the revenue of Cochlear Ltd to fall by 6.5% in 2020 compared to 2019.

As soon as COVID-19 rules were relaxed, surgical volumes increased steadily in nations including China, Spain, Germany, the United Kingdom, and the United States. So, the demand for cochlear implants returned to normal in the second half of 2022.

The factors anticipated to drive market expansion over the forecast period are technical advancement, increased R&D spending by the leading players, and telehealth audiology care.

However, the market for bilateral implants is likely to increase profitably during the upcoming decade owing to the device's cost-effectiveness when implanted in minors because they will have it more extended than the elderly. Additionally, the ability of these gadgets to detect speech in background noise will likely fuel segment expansion.

The cochlear implant sector is split into adult and pediatric divisions based on end-use. Due to a more extensive patient pool of senior people, the adult category, with 61% of the market, held the largest market share in 2022. The National Institute of Deafness and Other Communication Disorder estimates that in the U.S., 2.30% of people between the ages of 45 and 54 and about 8.64% of people between the ages of 55 and 64 have hearing loss, making daily activities difficult or impossible.

However, the pediatric market will likely expand significantly throughout the projected period. The National Institute of Deafness and other Communication Disorders estimates that in the U.S., 2 to 3 children out of every 1000 have a noticeable hearing loss.

Unilateral sensorineural hearing loss affects about 1 in 1000 live births in the U.S. (UHL). Cochlear implantation received approval from the U.S. Food and Drug Administration for children aged five and older with single-sided deafness (SSD) in the U.S. in 2019. These activities will likely fuel the pediatric segment's growth during the projected period.

Due to rising hearing aid awareness, the availability of speech therapy clinics, and advantageous reimbursement rules, Europe had the most significant revenue share 33.50% in 2022. The development of technology and the opening of new facilities in the European Union are responsible for the market expansion in the area. For instance, MED-EL Medical Electronics became the first manufacturer of cochlear implants to acquire certification from the European Medical Device Regulation (MDR) in March 2020. 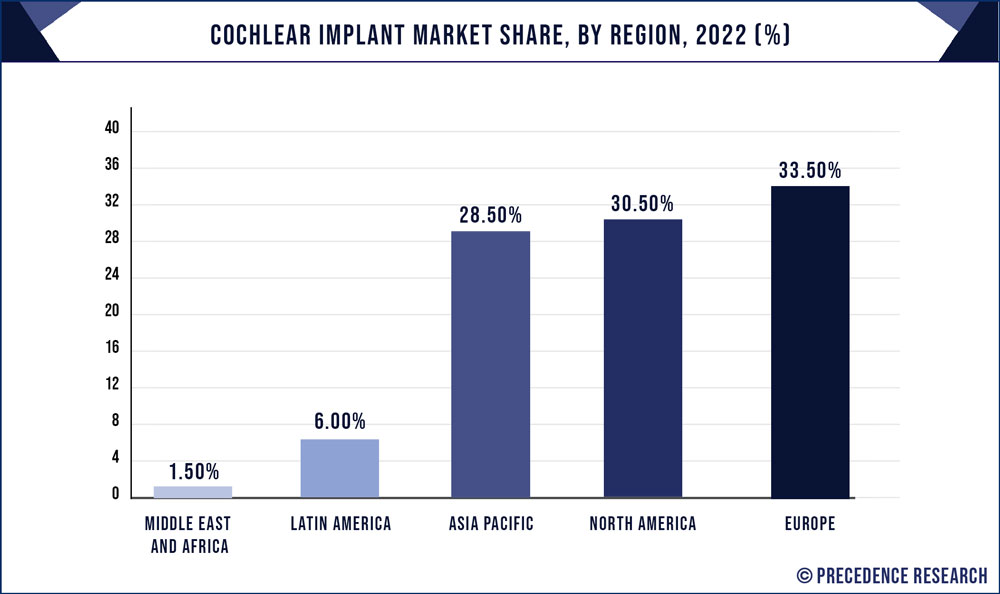 However, during the predicted period, Asia Pacific will likely have extraordinary growth owing to the fast-growing elderly population and growing public knowledge of hearing aids. The Asia Pacific market is expected to benefit from government initiatives that provide free healthcare to the poor. For instance, the India-based Assistance to Disabled Persons for Purchase/Fitting of Aids/Appliances (ADIP) Scheme intends to provide 500 underprivileged children with cochlear implants each year.

The European Union's highly developed healthcare system is mainly responsible for the market's expansion. Children can receive cochlear implants within a year of birth due to technological advances. For instance, the state-funded health system enables approximately 95.45% of children to have a unilateral cochlear implant, compared to the U.S.'s number of only 50.60%. Adults choose unilateral implantation in most countries; however, pediatric patients prefer bilateral implants because of their superior cost-effectiveness.

In March 2022, an industry leader in hearing care solutions, Sonova Holding AG, completed the previously announced acquisition of the Consumer Division of Sennheiser electronic GmbH & Co. KG. This represents the creation of a fourth business unit that will help Sonova grow its client base and channel presence while also broadening its appealing product line.

In June 2022, Demant declared that it had acquired the remaining 80% of ShengWang's stock, gaining complete control of the largest network of hearing aid facilities in China. This comes after the 20% minority investment disclosed on March 4, 2022, and it is an important strategic move in Demant'songoing venture in hearing healthcare.

Several well-established businesses dominate the market, which has become more consolidated. The main strategic activities of these businesses to increase market share are product launches and research projects for the growth of product portfolios. Sennheiser electronic GmbH & Co K.G.'s consumer segment was purchased by Sonova Holding AG in March 2022, becoming the company's fourth business unit. It is projected that the rapidly growing market for audiophile headphones would offer growth opportunities for this new customer hearing category. The following companies are some of the major players in the worldwide cochlear implant market:

Segment Covered in the Report

By Type of Fitting