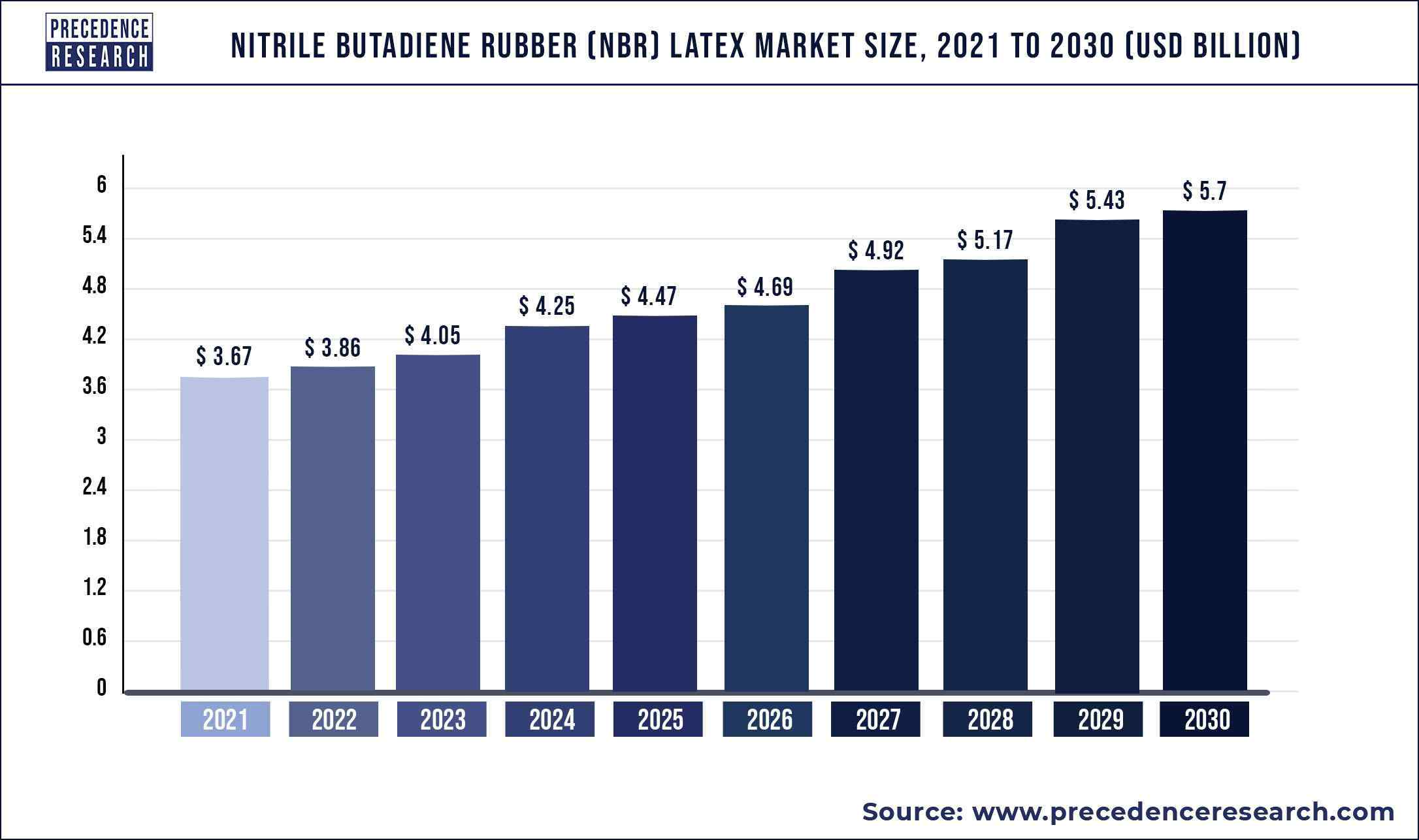 Rising demand for NBR gloves particularly in the medical industry because of rising investment in the healthcare sector expected to drive the growth of the market. The gloves are prominently used in surgeries and examinations to avoid the transmission of microorganisms in the patient’s body. Further, the rising demand for disposable gloves in various industries, especially in the food industry expected to accelerate the market value growth over the coming years.

Additionally, growing concern for the employee’s safety that are working in hazardous situations further projected to accelerate the demand for gloves in the forthcoming years. For example, the Occupational Safety and Health Administration (OSHA) issued a mandatory law for the manufacturing and industrial organizations to provide necessary safety equipment to their workers those are operating under critical or unsafe condition.

However, the rising concern for environmental protection along with stringent regulations related to the use and formulation of rubber is likely to hinder the market growth over the upcoming years. In addition, extensive research for the development of substitute materials for rubber in the market further estimated to limit the market growth. Whereas, expanding end-user industries predominantly in the developing countries across the world predicted to offer potential opportunities over the forecast time period.

Gloves segment captured the major market value share in the year 2021 and predicted to continue the same trend over the analysis period. The prominent growth of the segment is mainly because of its rising implementation in the medical and healthcare industry. Healthcare industry contributes nearly 70% of the total demand for gloves. Thus, the market for NBR gloves is mainly governed by the growth and trend in medical and healthcare sector. Further, increasing investment for the development of healthcare infrastructure predominantly in the emerging economies such as China, India, and Korea anticipated to augment the market size for gloves during the forthcoming years.

Healthcare end-user segment emerged as a global leader in the NBR latex market in the year 2021 owing to high consumption of NBR gloves in the sector. Properties such as chemical resistance, excellent wear resistance, and rebound resilience make it a good fit for numerous applications in the healthcare industry. Moreover, the outbreak of COVID-19 across the globe estimated to be the major reason behind the exponential growth in the demand of NBR latex gloves throughout 2020 across the globe.

Apart from healthcare, NBR also seeks significant demand from industrial and food segments. Increasing application of gloves for workers working in critical locations and parts of an industry particularly in the manufacturing industry is likely augment the market size for NBR latex in the forthcoming years.

Similarly, food industry is also a prominent revenue contributor to the market growth. The global NBR latex market is directed by various regulations particularly related to its different applications. For instance, the application of NBR gloves in the food industry is significantly regulated by the Food and Drug Administration (FDA), as the gloves comes in direct contact with the food materials. As per the regulation, some of the materials and chemicals such as chloroprene polymers, acrylonitrile-butadiene copolymer (nitrile), natural rubber (latex), and others are permitted to come into direct contact with the food. 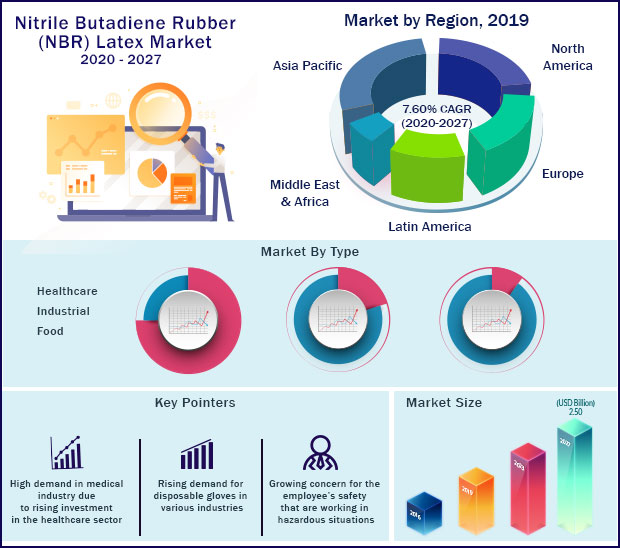 The Asia Pacific encountered maximum value share in the global NBR latex market in 2021. The prominent growth of the region is majorly due to large number of industries along with large consumer base in the region. Among all Asian countries, Malaysia held a dominating market share of nearly 65% in 2019 and predicted to continue its dominance over the projected timeframe. This is mainly due to maximum NBR gloves are being manufactured in the country. Because of the same, Malaysia also imports large amount of NBR latex as well as it witnesses the presence of large number of NBR gloves manufacturers.

On the contrary, North America and Europe are the other most prominent markets in the NBR latex as they have strong infrastructure for healthcare along with various manufacturing industries. As the NBR latex are largely used in the healthcare industries owing to its beneficial properties. In addition, increasing health awareness among the public also leads to extra care and thus surge the adoption of NBR gloves in the regions.

The global Nitrile Butadiene Rubber (NBR) latex market is majorly consolidated with top four players occupied nearly half of the total market share. These market players are significantly involved in the inorganic growth strategies such as partnership, collaboration, merger & Acquisition, and joint venture to acquire the maximum market share as well as strengthen its foothold in the global market.

Some of the prominent players in the Nitrile Butadiene Rubber (NBR) latex market include:

This research study comprises complete assessment of the market by means of far-reaching qualitative and quantitative perceptions, and predictions regarding the market. This report delivers classification of marketplace into impending and niche sectors. Further, this research study calculates market size and its development drift at global, regional, and country from 2016 to 2027. This report contains market breakdown and its revenue estimation by classifying it on the basis of application, end-user, and region: