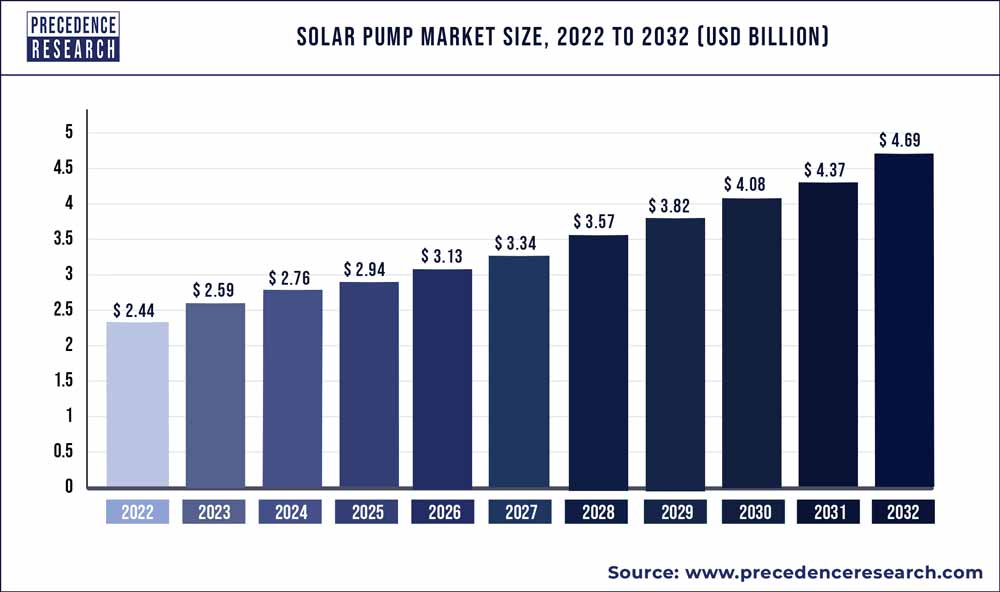 A solar-powered device known as a solar water pump moves water for a variety of uses, including irrigation, community water supplies, and potable drinking water. Utilizing solar water pumps has reduced the need for energy-dependent resources like coal, gas, and diesel. In the upcoming years, increased investment in agricultural applications is anticipated to drive market expansion.

The market for these units will increase due to rising interest in reducing carbon emissions and great adoption rates of renewable energy devices. Low operating costs and the depletion of fossil fuel supplies are two major reasons that will propel the expansion of the solar pump industry. Over the anticipated time frame, increased government subsidies provided to farmers and manufacturers as well as the adoption of strict rules to reduce carbon footprint would increase product penetration. Solar pumps will be in high demand due to little access to energy, high reliance on rainfall, and logistical difficulties with fuel delivery in remote locations. Additionally, the fast-falling price of solar photovoltaic PV panels will further boost product adoption. For instance, according to the IEA, the cost of producing PV modules fell by 80% from 2009 to 2016.

The favorable business environment for the solar pump market has been produced by ongoing developments aimed at attaining energy efficiency throughout industrial facilities. Due to the increase in agricultural operations and rising water demand for irrigation, the U.S. solar pump market is predicted to expand. The adoption of these systems will be positively influenced throughout the projection period by federal tax incentives, subsidies, and supportive policies toward the development of renewable energy technology.

In less developed areas, there is less knowledge regarding solar pumps

Because of its great performance and longevity, A.C. Pumps now occupy the majority of the market. A pump assembled with DC type motor is directly linked to a PV array through a DC controller. Due to the lack of a power conversion process, DC pumps motor possess longer lifespans and are proven to be more effective than an identical AC device. 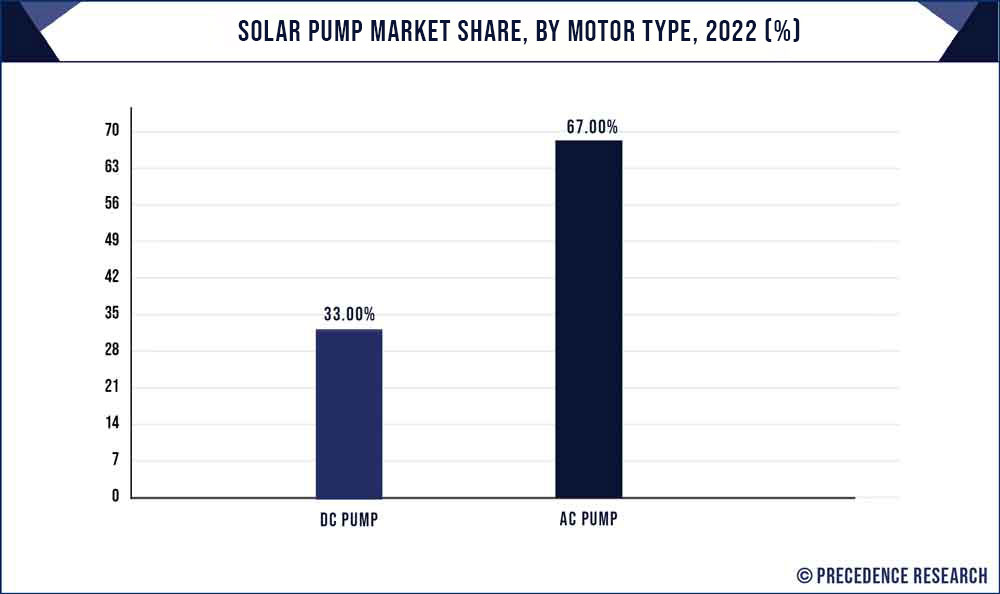 Such pumps are often utilized for lower head or lower volume applications with up to 4KW power requirement because of their limitations in head and flow. In addition, DC-type pumps have had a lower rate of acceptance than AC pumps due to a number of instances of faulty wiring, electronic circuit failure, unsafe DC voltages, and terminals that did not offer a solid electrical connection.

The rising use of solar pumping systems in agriculture is the main factor fueling the market expansion for these devices. Agricultural uses for solar pumps include irrigation, providing drinking water for cattle, and desalination. Farmers' operational expenses can be decreased and their earnings can rise by using solar pumps in agriculture. Solar pumps can also aid farms in lowering their carbon impact.

By region, the Asia Pacific market has held the highest revenue share in 2021.

Due to the rising need for renewable energy sources, particularly in the agricultural sector, the United States is one of the key markets for solar pumping systems in North America. Over two million farms, or about 30% of the nation's total land area, are located in the United States, according to the U.S. Department of Agriculture (USDA). Different types of pumps are used on these farms for a variety of tasks, including irrigation and watering cattle. As a result, the market for solar pumping systems in North America is anticipated to increase due to the rising demand for solar pumps from the agricultural sector throughout the course of the projected period.

Solar pumping systems are employed in drinking water applications, such as community water projects and rural off-grid locations, in addition to agriculture. Over two billion people worldwide lack access to clean drinking water, according to WaterAid America. As a result, the demand for clean drinking water in distant locations is increasing, which is anticipated to drive up solar pump demand in North America throughout the projection period. The market for solar pumping systems in North America is dominated by companies like Xylem Inc., Franklin Electric Co., Grundfos, and KSB SE & Co. KGaA. These players are well-established in this area and provide their clients with a large selection of goods. Due to the power-generating component, which has led to a significant increase in clean energy and is therefore expected to fuel the market growth for solar water pumps throughout the area, market dynamics have been favorable in Latin America.

The solar-powered water pump sector is expanding across the Middle East and Africa, particularly in sub-Saharan Africa, as a result of recent technological advancements and falling costs. Traditional forms of water pumps include diesel pumps and electric pumps that are connected to the grid, but with the dramatic reduction in the price of PV panels, solar-powered water pumps have started to gain traction and will continue to expand throughout the projected period.