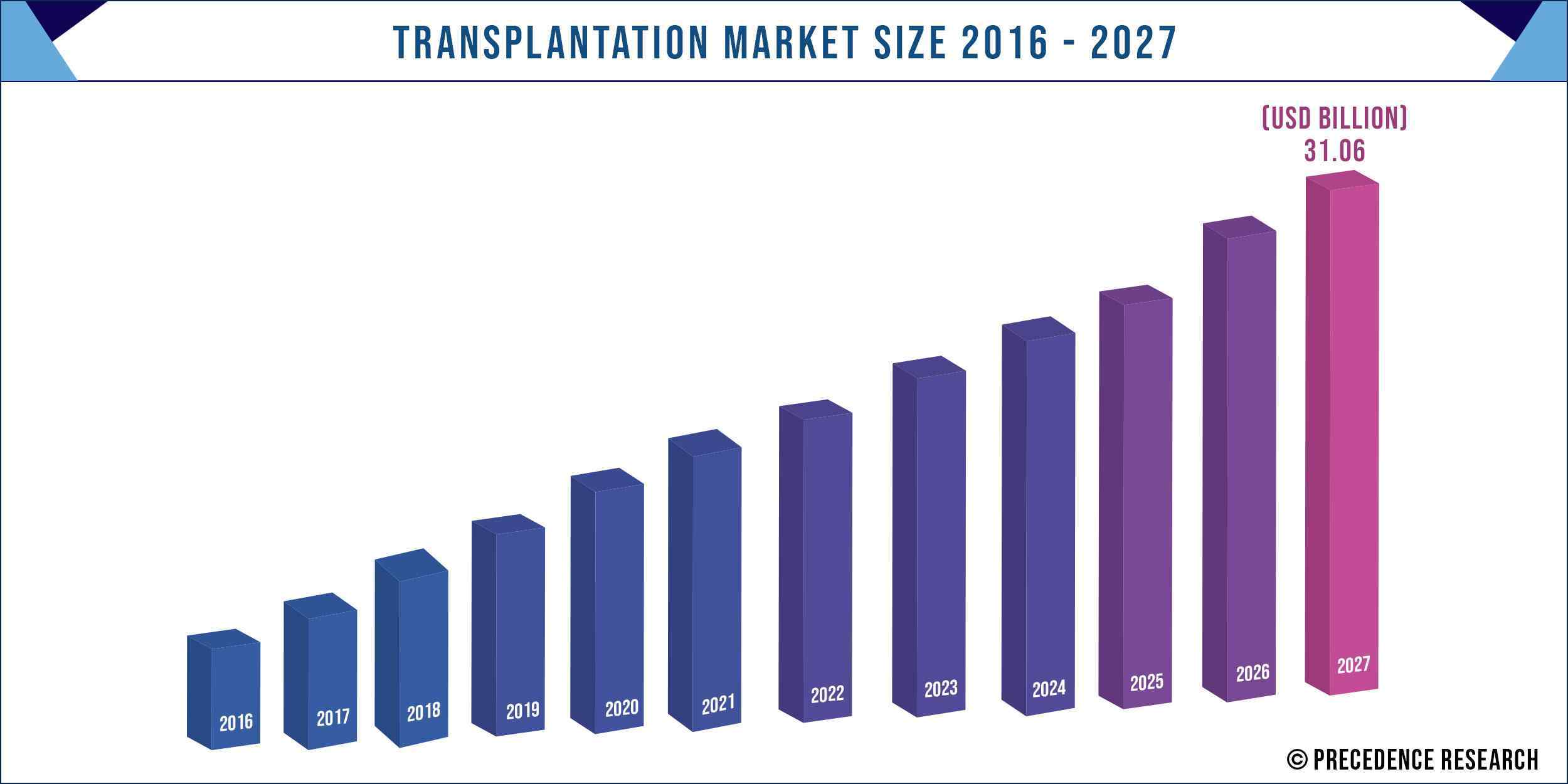 Organ failure occurs because of various factors that include loss of blood, serious trauma, drug abuse, poisoning, sepsis, leukemia, and other acute diseases. Demand for organ and tissue transplantation mainly heart, kidney, lungs, and liver is very high. Alcohol consumption, unhealthy dietary habits, drug abuse, and lack of exercise are some of the major causes of organ failure. This expected to trigger the demand for transplantation products in the coming years. Additionally, increasing number of acute diseases has also resulted in the rising cases of organ failure.

However, customary and religious belief along with lack of awareness related to organ donation prevents large number of people from donating organs. Thus, shortage of organs for the treatment of organ transplantation is likely to hinder the market growth. There is a massive gap between the supply and demand of organ for the treatment of organ failure. As per the U.S. Department of Health & Human Services report in 2019, total number of patients for kidney transplantation was 43,201, yet only 23,401 procedures for kidney transplantation were performed.

Tissue product segment was the highest revenue contributor in the global transplantation market in 2019, accounting for a market value share of nearly 58%. Significant rise in the transplantation procedures such as heart valves, cochlear, orthopedic soft tissues, and bone marrow prominently drives the growth of the segment. Further, advancement and development of new transplantation products is the other most important factor that propels the market growth. For instance, in September 2015, Arthrex Inc. introduced ArthroFlexAcellular Dermal Matrix, an orthobiologic product that is generally used capsular reconstruction.

On the other hand, immunosuppressive drugs segment projected to exhibit the fastest growth during the forecast period. This is mainly attributed to the increasing use of these drugs to prevent the post-transplant organ or tissue rejection. Rising number of chronic diseases has significantly boosted the organ transplantation market, which in turn expected to fuel the growth for immunosuppressive drugs over the analysis period.

Tissue transplantation application segment emerged as the global leader in the global transplantation market, with a revenue share of around 60% in the year 2019 and projected to expand at the fastest rate during the forecast period. This is attributed to the fact that replacement of cornea, skin, heart valves, bones, nerves, tendons, and veinsare the most common procedures performed globally. Furthermore, the increasing cases of burn and accidents expected to fuel the demand for tissue products in the coming years.

Hospital segment dominated the global transplantation market with value share of approximately 49% in the year 2019 and analyzed to retain its dominance over the forecast period. This is mainly due to increasing number of tissue and organ transplantation at hospitals as they are the primary health treatment centers. In addition, significant advancement along with rising investment for developing hospital Infrastructure equipped with advanced facilities attracts major audience.

On the contrary, transplant centers registered the highest growth rate during the forecast period. Increasing number of transplantations has triggered the need for large number of health centers to cater the patient requirement. Additionally, the rising government initiatives to encourage the public for organ donation again flourish the market growth.

North America encountered as the most prominent region leading the global transplantation market with significant revenue share of nearly 40% in 2019 and projected to maintain its dominance throughout the analysis period. Well-developed health treatment facilities along with the presence of several major medical devices as well as biotechnologies manufacturing companies such as Zimmer Biomet, Arthrex, Inc., Novartis AG, Medtronic, and Stryker supports the market growth. 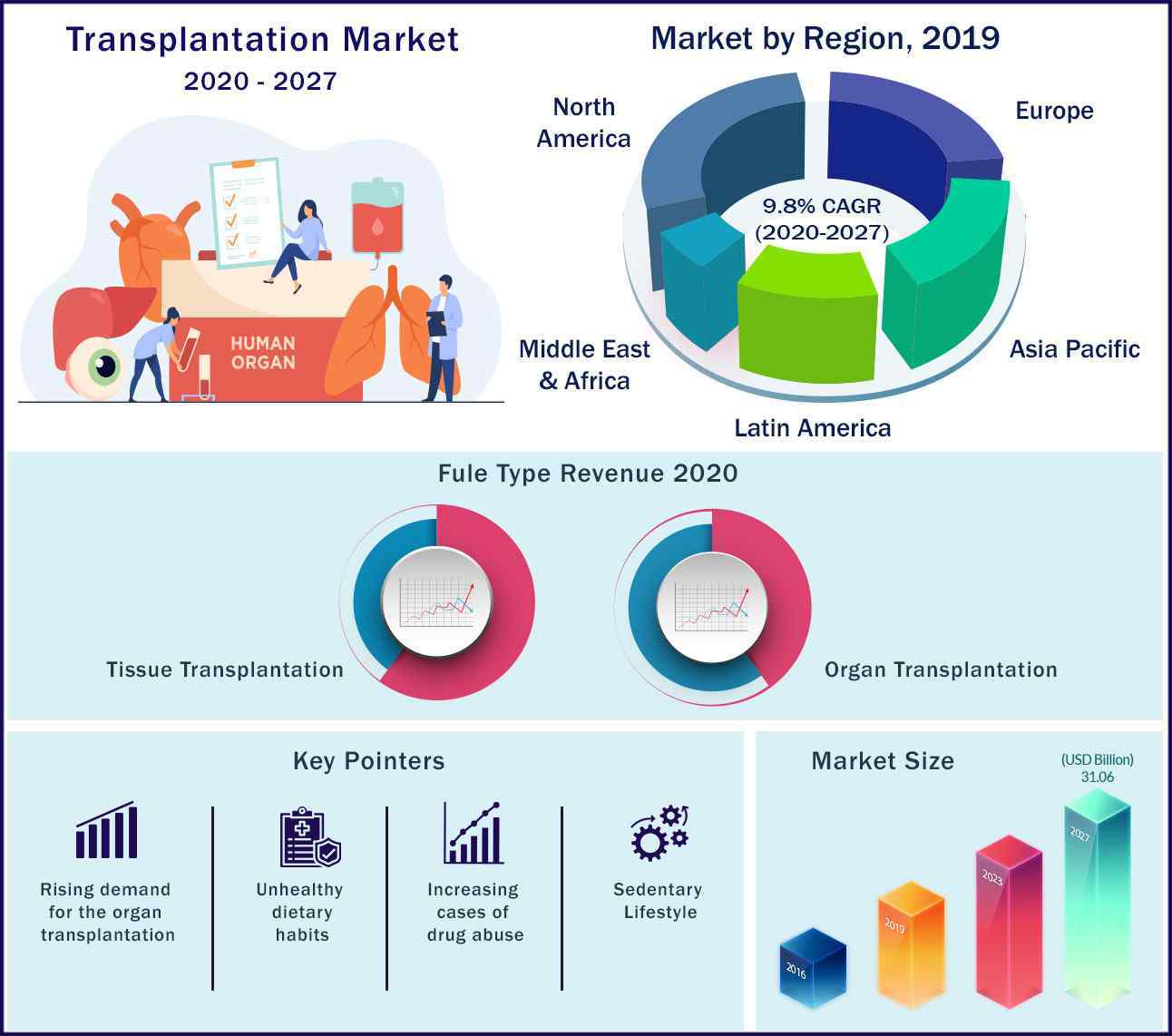 However, the Asia Pacific registered the fastest growth over the analysis period due to increasing research activities on stem cells for developing organs and in vitro tissue. Furthermore, developing healthcare infrastructure in various Asian countries such as Thailand, India, Indonesia, and Philippines analyzed to propel the market growth in the region.

Some of the prominent players in the transplantation market include:

Report Scope of the Transplantation Market

This research study predicts market revenue and its growth rate at global, regional, and country levels and gives inclusive scrutiny of the newest industry drifts in all of the sub-segments from 2016 to 2027. This report categorizes global transplantation market report depending on product type, application, end-use, and region: