The global waste to fuel technology market is expected to grow at a compound annual growth rate of 29.5% during the forecast period 2022 to 2030. 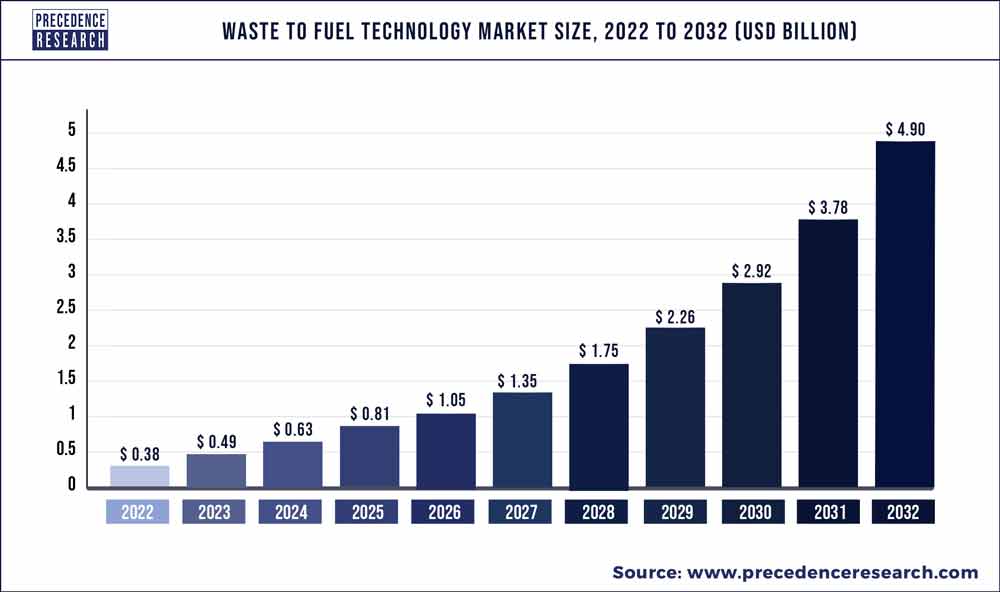 Due to rapid urbanization and in industrialization there is a growth in the demand for electricity. The demand for energy is expected to grow across all the developed as well as developing economies across the globe due to an increase in the disposable income and a growing demand for various electronic gadgets. Dual income households are leading to a good amount of growth in the spending power.

Increased use of electronic gadgets in the households as well as the workplace is expected to create a demand for electricity in the coming years. Compared to the developed nations the consumption of energy in the developing nations is more. Products like synthetic diesel and methanol can be produced with the use of unwanted waste. Non hazardous industrial waste is used on a large scale in order to produce synthetic diesel at an affordable cost.

Many organizations are trying to produce low emission fuels which can be used in different vehicles. These companies are working on producing these fuels with the help of the household trash. The process of manufacturing low emission fuels by treating the waist which comes out of the offices and the homes is expected to grow during the forecast period. This technology requires a long term research before it is available for use across the globe. Pyrolysis is one of the most common techniques which is used in order to generate energy. In this process plastic waste is converted into fuel which is in the form of oil or gas. With the help of pyrolysis plastic can be heated at emperor off about 400 C to 650 C. The use of plastic pyrolisis in the iron factory, cement factory will drive the growth of the market. Due to the stringent policies of government regarding the greenhouse gas emissions for various industries will lead to the growth of the waste to fuels market in the coming years.

The COVID-19 pandemic had a negative impact on the ways to fuel market battered due to the disruption in supply chains end the shutdown of various plants and refineries the market is expected to see a slow growth during the forecast period.

There is a growth in the number of manufacturers in the ways to fuel market. The growth of the manufacturers is more in the European and the North American region. Increased investments by the government and the availability of advanced infrastructure for the waste management we will drive the growth of this market. These stringent government policies are helping in the adoption of the waste to fuel technology. As there is a growing concern among the developing as well as the developed economies regarding the reduction of greenhouse gas emissions the demand for ways to fuel market is expected to grow during the forecast period.

In order to meet the net zero target by the year 2050 many nations are striving hard in order to reach the target there is an increase in the demand for high quality fuel equipments in the globe due to the awareness regarding the availability of these devices and an increase in the disposable income. Increasing the environmental concerns and the need to reduce greenhouse gas emissions is driving the market growth. Increased research and development in order to install plants for the production of fuel with the use of waste Is encouraged by the governments of various nations. Subsidies and tax benefits are offered by the government's which will prove to be profitable for the growth of the market.

The innovative idea of converting waste to fuel will help in satisfying the demand of the industrial sector as well as the residential sectors. Many developing nations or adopting ways to fuel conversion and they have effectively converted the processes into standard company models. The quality of the fuel is compromised due to the use of contaminated food stock for the production of the fuel. European Union waste legislation is aiming to reduce the plastic waste in the coming years. According to the legislation at least 55% of the plastic waste needs to be recycled. Owing to all of these reasons the market for ways to fuel technology is expected to grow well during the forecast period.

Report Scope of the Waste to Fuel Technology Market 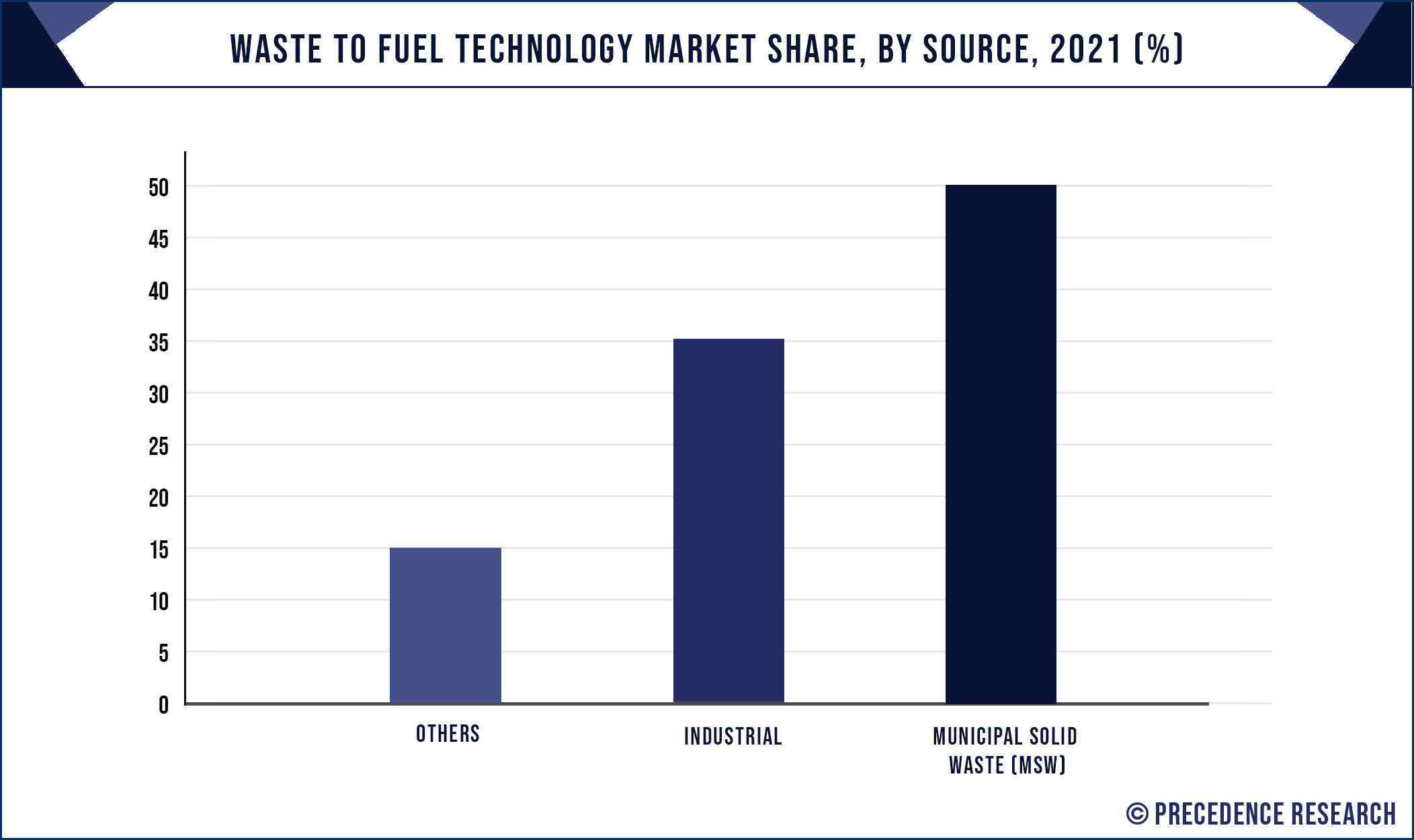 On the basis of the depolymerization, the pyrolysis segment is expected to grow with the highest compound annual growth rate during the forecast period. The segment has grown well in the recent years. The use of this method is in great demand as it is a cost-effective method as compared to all the other methods available. The use of this method for generating fuel will create a greater demand as it will help in creating greater demand due to its cost-effective nature. The raw material used is in the form of waste which is a threat to the environment. Even though there are strict policies for the disposal of waste still many nations across the globe sees incorrect disposal of waste which hampers the environment. The decomposition of plastic which is a thermal decomposition occurring without the use of oxygen it's a boon for the market. This segment will provide a better penetration in the market. The segment is expected to have a larger share in the market as this technique is able to produce different types of fuels like synthetic gas and biofuel.

The gasification segment is also expected to grow well during the forecast period. The organic waste is converted into carbon monoxide, hydrogen and carbon dioxide gas. The use of this method is able to generate hydrogen which is in great demand so the segment is expected to have a good growth.

Depending upon the type of fuel the liquid fuel market is expected to grow well during the forecast period. The liquid fuel segment has dominated the market in the recent years. A large quantity of fuel is generated with the help of the waste. The contamination of the waste used for production of fuel affects the quantity. With the help of pyrolysis about 100 gallons of fuel is generated with a single ton of plastic waste. The demand for the generation of fuel in this manner is expected to grow in the coming years due to the fluctuating international oil market. Political unrest amongst the various nations across the globe is creating a larger demand for this market. Many major manufacturers of oil or adapting waste to fuel technology in order to have a sustainable growth.

Asia Pacific region has grown well in the recent years and it is expected to dominate the market in the coming years. As the government in the Asia Pacific region has formulated a favorable policies and regulations for the development of renewable energy technologies the market in this region is expected to grow with the highest compound annual growth rate during the forecast period. Rapid industrialization and urbanization in the Asia Pacific region is driving the growth of the fuel market due to the increased use of fuel. Japan, China and India all the countries that will lead the growth of the market. India and China are highly populated nations and the population is expected to grow in the coming years. The growing population is one more reason which is creating a demand for the fuels. Increase the amount of consumption of fuel in order to meet the cooking requirements, transportation requirements and other requirements of the household the market is expected to grow during the forecast period.

European region we'll see a significant growth in the ways to fuel market during the forecast period. Development of favorable regulatory environmental policies by the European Union will drive the growth of the market in this region. In this region the recycling rate of the waste in the countries like Switzerland Germany and Austria will be efficient in generating fuel. Mergers and acquisition of the international players will drive the growth of this segment. Most of the nations or finding solutions in order to handle the plastic waste. There is a growing demand for clean fuel in the developing economies. Government regulations and increasing environmental awareness our responsible for controlling the carbon emissions in the environment.