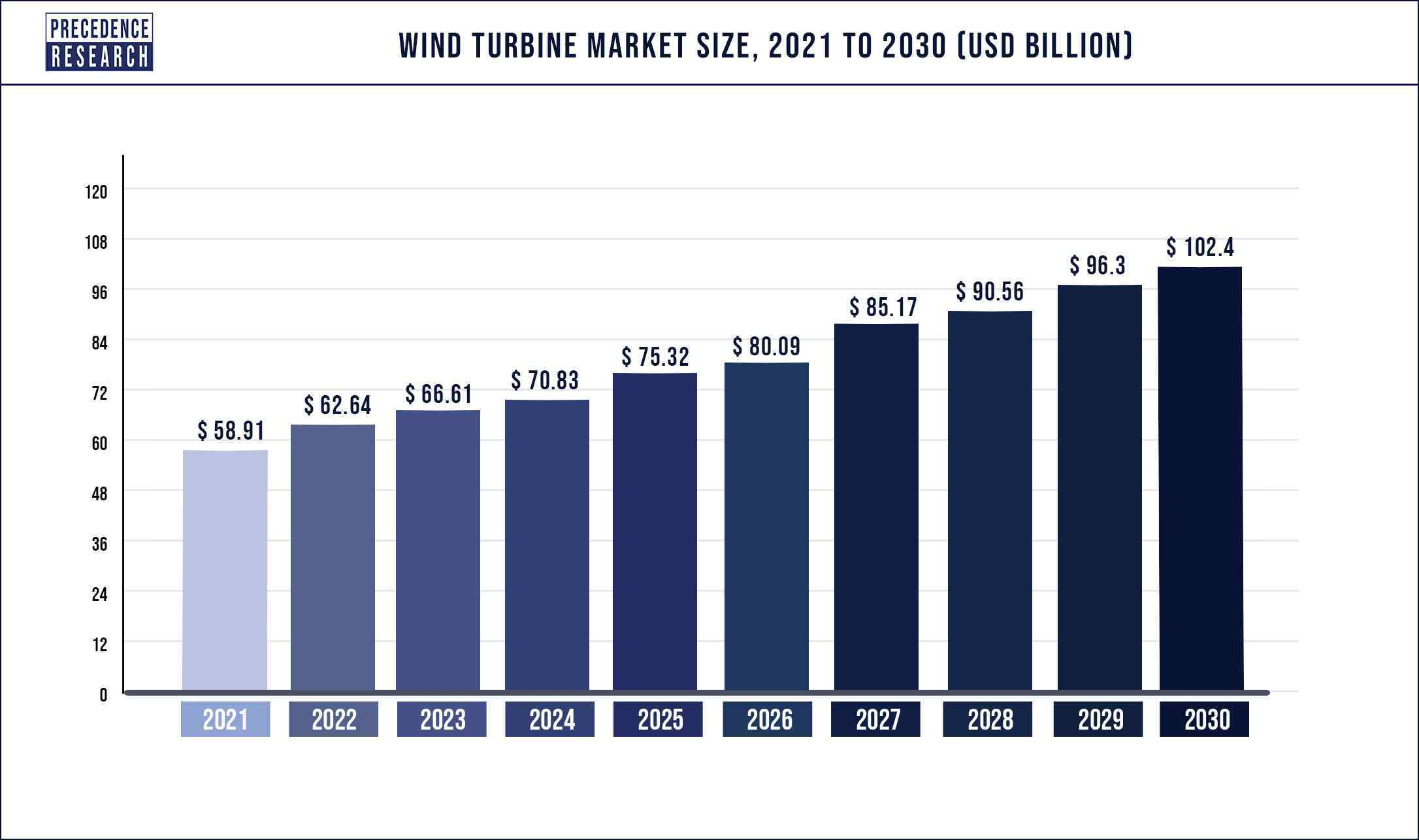 In order to convert the wind energy into electric energy, wind turbines are used in the wind power plants. The electric energy is derived due to the aerodynamic force of the rotor blades. The conversion of the aerodynamic force to the rotation of a generator produces electricity. As various governments are adopting initiatives to combat the climate change renewable energy is experiencing great growth. With the COVID-19 outbreak in 2020, the growth of the wind turbine market was impacted in terms of delays in manufacturing and delays in the supply of raw material or the supply of new turbines. So all of these were the challenges faced by the wind turbine market.

COVID-19 had impacted almost all the industries across the globe. The industrial operations were affected due to delays in the supply chains. The operations of many companies were halted due to the absence of workforce. Apart from that many vendors have migrated to their hometowns due to the uncertainties in the income during the lockdown so the production and manufacturing activities had come to an halt. Even during the forecasted the growth could be hampered due to the shortage of workforce. The import and export activities were also impacted which directly affected the wind turbines market.

As the governments are taking initiatives to produce renewable energy there is a growth in the market. An increasing demand for renewable energy sources, especially the wind power and efforts to reduce the dependence on fossil fuel based power generation are expected to be the major factors for the rise of this market. Many tax benefits and incentives are provided by the governments which are helping in reducing the prices of the components so it is expected to give a boost to the wind turbine market. Across many developing nations, there is a mismatch in the supply and demand so there is a surge in the wind turbine market.

In the offshore installation of the wind turbines, the companies are being able to install taller turbines and also larger blades in order to sweep more area than the smaller turbines. As the size of the wind turbines has grown, it has also helped in lowering the cost of wind energy. The adoption of offshore wind markets for the wind energy with the help of advanced technologies has attracted many nations and companies for high investments. The wind energy is variable. If the wind doesn't flow, no electricity is generated. The wind energy industry is still blooming due to the efforts taken by the various nations across the world to combat climate change, such as the Paris Agreement.

Depending upon the axis of the wind turbine, the vertical segment is expected to dominate the global market and it is expected to remain the fastest growing segment in the forecast period as the main features of this type is it provides high efficiency at lower price. 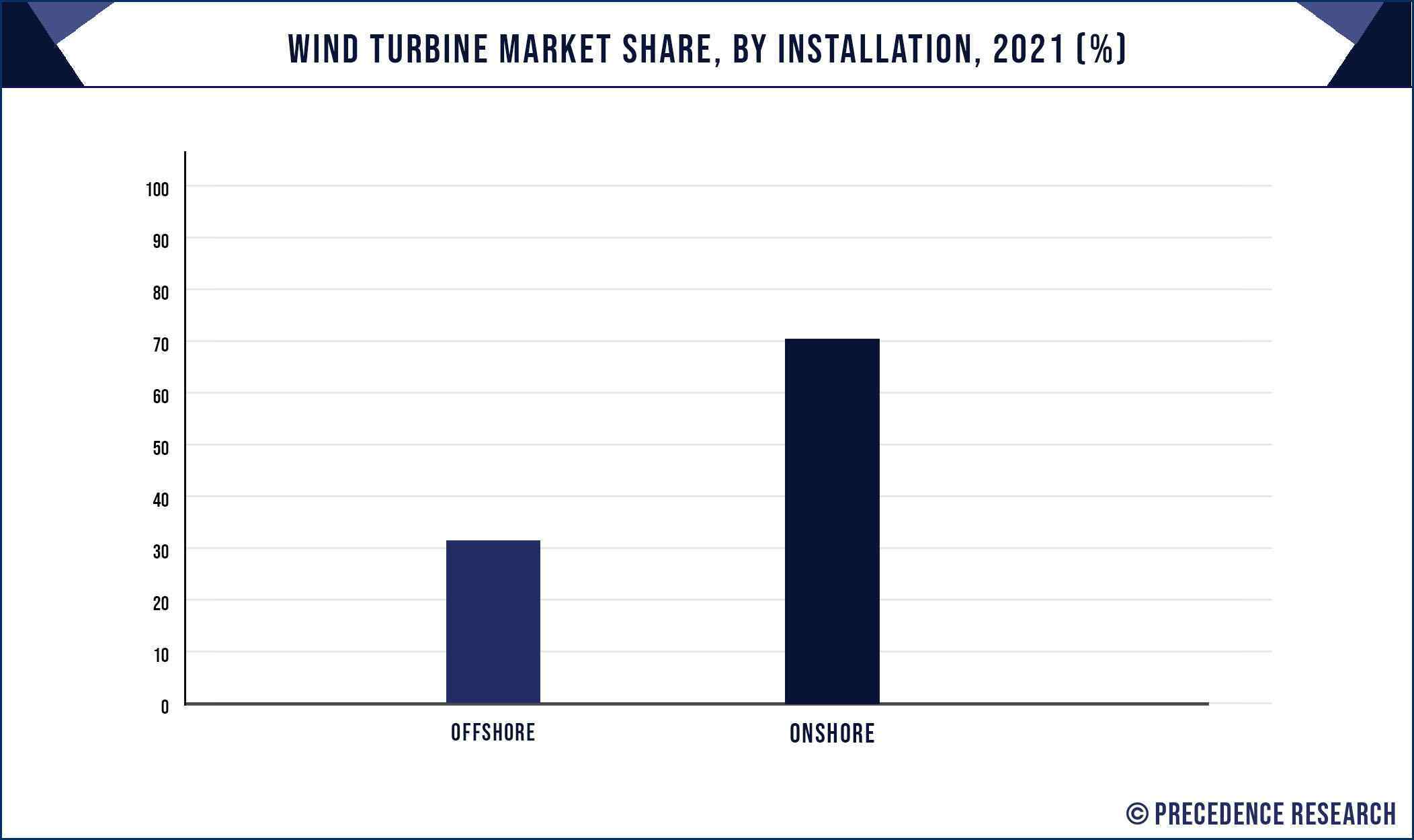 The offshore wind turbine installation is expected to grow during the forecast as the major companies in the countries are turning towards the adoption of renewable energy sources and clean energy sources. The offshore wind turbine provides many other benefits like improved power generation due to consistent wind flow and quick installation of the turbines.

The wind turbine market has many components and based on the components it can be classified into rotator blade, Generator, gearbox, nacelle and others. The rotator blade segment has dominated the market till 2021 and it shall rise during the forecast the reason being rapid industrialization and increased power industries.

The Asia Pacific region is expected to be the largest and the fast paced market as they have the largest wind power generation and the presence of manufacturing and technological hubs in various countries like India, Japan and China. The installation capacity in China has dominated the Asia Pacific market. The fourth largest wind power installed capacity is held by India. The major projects are situated in the northern, western and the southern parts of the country. The Indian government aims to achieve 60 gigawatts, by the end of 2022. Major companies are investing in the Asia Pacific market.

North America is the biggest segment for this market in terms of region. It is due to the rapid infrastructure expansion and due to the implementation of various offshore wind projects the global wind turbine market has Asia Pacific region as the fastest growing area and it is expected to grow during the forecast. The main reasons for the growth in this region are the increasing population which provides a large consumer base and an ever increasing demand for the renewable sources of energy.

GE Renewable Energy announced that they will be supplying 42 units of 2.7-132 onshore wind turbines for the wind projects, which will be a total of 110 megawatts in India , which will help in meeting the electricity demand of various industrial companies in the states of Gujarat as well as Karnataka during the forecast period.

In 2021, GE Renewable Energy and Toshiba Energy solutions along with Solutions Corporation announced a partnership to localize the critical phases of the manufacturing of GE Haliade X which is an offshore wind turbine and support the commercialization of this turbine in Japan.

JSW energy Ltd which is a part of JSW group has ordered 810 MW of onshore wind turbines from GE Renewable energy for its upcoming projects in Tamil Nadu.